MSU team quantifies the importance of storytelling in crisis communication

A Montana State University team has discovered that telling a story about a potential hazard engages the audience significantly more than delivering straight facts.

MSU political science professor Elizabeth Shanahan led the interdisciplinary team of seven MSU professors and two graduate students who investigated how a narrative-based risk communication might better prepare the public to avoid a natural disaster. Their paper, “Characters matter: How narratives shape affective responses to risk communication,” was recently published by the journal PLOS One in its special issue on science and story. 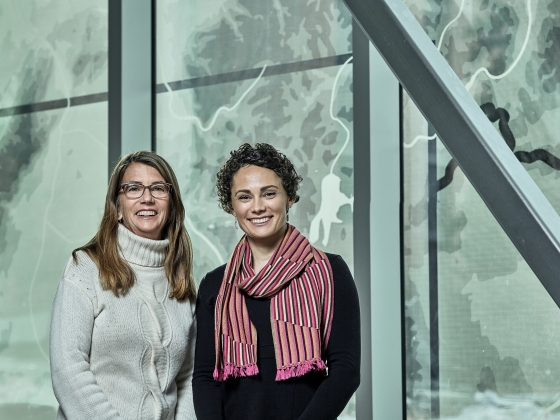 Montana State University faculty Elizabeth Shanahan, left, associate professor of political science and Ann Marie Reinhold, assistant research professor in land resources and environmental sciences, along with other MSU faculty collaborators, have co-authored a paper that will be published in PLOS One academic journal about the power of narrative in risk communications. MSU Photo by Adrian Sanchez-Gonzalez

Based on work funded by a National Science Foundation grant and with data garnered from flood-prone parts of Montana, the article demonstrates that the public pays more attention and internalizes risk best if the information is presented as a story, particularly if the public can visualize becoming a hero in that story by being prepared.

Shanahan said the strength of the MSU team was the members’ diverse viewpoints and distinct disciplinary approaches.

“Interdisciplinary research takes time and patience. For example, we even had to arrive at a similar language surrounding what a hypothesis is and how to analyze and visualize data,” Shanahan said. “We bring very different ways of knowing to science that have, in the end, produced a fantastic article that advances the study of hazards and risk preparation. None of us could have done this work as individual scientists.”

Working with emergency managers in 2017, researchers interviewed about 45 people in flood-prone areas along the Yellowstone River. From those interviews, the researchers developed a list of commonly used words associated with narrative characters and then built multiple risk-preparation messages.

In group sessions, respondents were given eight messages regarding flood risk. Two contained straight scientific facts; those were least favorably received. The remaining six involved using different character types, such as hero or victim, along with scientific information . The messages that elicited the greatest response were those where the participants could visualize becoming a hero in the face of a hazard. The biggest change in audience response occurred when messages called upon the listener to transform from a victim to a hero, she said.

“Conventional risk communication efforts are often ineffective at inducing people’s preparedness,” the group writes in the article. “One possible explanation is that scientists and the public do not share a common language to describe risk.”

Shanahan notes that audiences did not respond when characters were first portrayed in the message, but they became very engaged when characters actually did something. The team called this phenomenon the “Hobbit hypothesis.” That means the first chapter introducing the characters is not very exciting. However, when the characters become active, the audience also becomes engaged in the story.

Shanahan said the results of the study have important implications for all organizations seeking to deliver information about how to prepare for hazards such as floods, earthquakes and wildfires.

“Of great importance to agencies in the area of risk communication is that a message within a story narrative will move people,” she said. “To prepare people for a disaster, this is when you need story.”

Nic Rae, dean of the MSU College of Letters and Science and a political scientist, said Shanahan and the team are international leaders in demonstrating the importance of narratives in formulating public policy choices.

“Their results also have relevance for the debate of communicating science, one of the critical issues of our time,” he said.

Shanahan has been working for about 15 years developing what is known as the narrative policy framework, which quantifies how people tell and are influenced by stories. Her undergraduate degree from Dartmouth College was in comparative literature, so the idea of story theory came naturally. She said she began her work measuring political narratives while a doctoral student at Idaho State University. She now specializes in policy process and political communication.

That work has led to serving as the principal investigator and co-principal investigator of two NSF-funded projects about the importance of narrative in scientific communications. Her work often takes her to Australia, where she works with Raina Plowright, MSU professor of microbiology, on how to communicate information about Hendra virus, a zoonotic disease that can also be fatal to humans. She also works internationally on conflict communications involving humans and wildlife.

She said the next steps in the project are to test how narrative-based risk communication influences risk perceptions and decisions and to spread the information to emergency managers throughout Montana.

“We hope that with this work we can better align perceived risk with actual risk,” Shanahan said. “The point of the study is: If you know what you want people to do, the way to get them to prepare is to put the important science in a story form.”