Montana extremists are hijacking Bozeman’s COVID-19 crisis for their own self-promotion and grandstanding. Since Thanksgiving, two well-known extremists have stood outside of the home of Matt Kelley, an officer for the Gallatin County Health Department, to protest COVID-19 safety measures. Those protective protocols are effectively reducing the exponential increase in cases, hospitalizations, and deaths in the valley.

The presence of these men is intimidating, but the mothers of Bozeman are showing up with love. They are gathering courage and support throughout the community. Their friendships are building a network that is creating a visible presence of gratitude, safety and unity for Kelley’s family and local health care professionals.

Extremists At Our Front Doors
Coming into Gallatin from neighboring counties and leading the protests are Roger Roots and John Lamb, men directly tied to violent extremist Ammon Bundy. Ammon and his father, Cliven Bundy, made international news for leading insurrections against federal agents in Nevada in 2014 and Oregon in 2016. Family members and their followers started an anti-government, pro-militia movement after refusing to pay grazing fees on public land. When the government responded to their transgressions by attempting to confiscate trespassing cows, the  Bundys  and their militia supporters engaged in an armed standoff with law enforcement.  Ammon Bundy and his brother Ryan staged an armed takeover of the Malheur National Wildlife Refuge two years later.

Ever since the standoffs in Clark County and the Malheur National Wildlife Refuge, Ammon Bundy has tried to build a broader following by alleging that the federal government is committed to taking away people’s constitutional rights. His movement went into overdrive in 2020 with the initiation of COVID-19-related shutdowns in March and April when he and his supporters bet that they could leverage the pandemic to launch their next misinformation campaign against perceived government overreach. Their targets are now city and county health officers trying to protect their communities from the spread of disease.

“Ammon Bundy and his so-called People’s Rights Network are using the pandemic to recruit and mobilize community members against public health measures designed to slow the spread of COVID,” said Travis McAdam,  Program Director for Combating White Nationalism & Defending Democracy at the Montana Human Rights Network. “Bundy and militia supporters have shifted their crosshairs from federal land managers to local officials who are acting in the interest of public health. From his history, we know what the Bundy Plan involves instigating conflict, driving division, and stoking anger until there’s an armed standoff.”

Bundy created the People’s Rights Network, a growing collection of 20,000 followers linked to a texting platform that connects 153 “assistants” in sixteen states across the US. At any time, Bundy can “call up” his supporters to appear at a location to pressure local officials who are working to impose COVID-19 safety measures.

Threatening public officials at their place of residence is a page right out of Ammon Bundy’s standard playbook. In April, Bundy doxed a police officer and assembled a crowd outside his home to object to the arrest of a woman who was violating COVID-19 restriction orders by bringing her children to a park closed during the pandemic. The event was completely staged and meant to provoke law enforcement.

In November, Bundy followers also organized a protest at the home of Boise’s mayor. Just this month, Bundy used his network to protest an online meeting of the Central District Board of Health in Boise, Idaho. Some of these people, known as Ammon’s Army, took the situation a step further and stood outside officials’ homes during the meeting. In one case, an official’s twelve-year-old child was home alone when protesters arrived to menace the family.  https://www.ktvb.com/article/news/local/208/ada-county-commissioner-diana-lachiondo-boise-idaho-home-visited-by-protesters-kids-home-alone/277-7c13c39d-0c39-42ac-911a-ae351fb8f7c2

Roots and Lamb have been close with Bundy for years.  Roots’ extremist background goes back to the 1990s, when he was associated with white nationalist John Abarr, a Klan organizer in Montana and Wyoming. While Roots has technically denounced his white nationalist past, he provided legal assistance directly for the Bundy family during their trials in Nevada and Oregon.

Lamb was also front and center at the Bundy trials in Las Vegas and Portland, often filming updates and offering commentary in front of the courthouses with other Bundy loyalists.

Back here in Montana, he traveled around  with Roots  and other Bundy supporters this summer holding Rage Against the State events in Livingston, Belgrade, and Whitehall. These events were organized to promote anger towards legitimately elected or appointed officials who supported public health recommendations.

Roots and Lamb have used the Bundy network to try to call in other supporters, but their efforts have been largely unsuccessful. They publish videos that claim they have community support. In reality, very few people have arrived to join them.

The situation that’s developing in Bozeman isn’t about these men, however. It’s important to understand how they got the idea to try and bully a public official at his home in a quiet Bozeman neighborhood, but this story is really about the women who came together to protect the health officer — and the entire community. 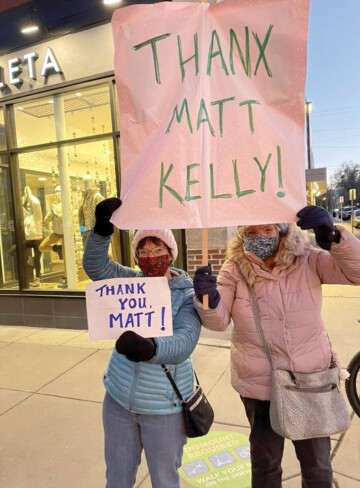 Send In The Moms
A few days after Roots and Lamb appeared in Bozeman, a call went out to a local mother, who heard that neighborhood children were afraid to play in their own yards when strangers were hanging out in their neighborhood and taking videos, and this mother wanted to know what she could do. She contacted Cherilyn DeVries, a community organizer from Love Lives Here in the Flathead, an affiliate of the Montana Human Rights Network, who offered a few suggestions.

Word was passed from mom to mom that these families needed support, and they immediately created a plan and swung into action.

Within 24 hours of that initial phone call, a rally to support Matt Kelley was organized. More than 80 people stood on Main Street holding signs saying “Thank You Matt,” and “I Stand  With Matt Kelley.” Cars honked and waved. People who attended asked organizers if they could do it again, soon.

“It’s impressive to see how quickly these women provided support for the families who are caught in this situation. Instead of panicking, they found beautiful, peaceful ways to show that extremist activity does not work in their community. They refused to let division and intimidation define them,” said DeVries.

As planning for the next peaceful rally began, more moms were looped in. They decided that the entire neighborhood needed a bright, unmistakable symbol of support for the residents who were afraid to be outside their own homes when Roots and Lamb were present. 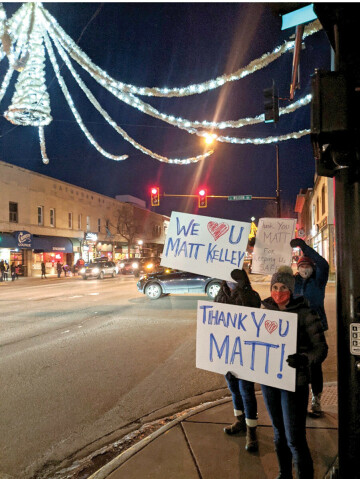 Once again, a plan came together almost immediately. A local business donated balloons. Some moms wrote notes of encouragement to remind their friends that they had support from the entire community. Other women arrived in the neighborhood before the protesters arrived and tied the balloons and postcards on fences and doorknobs. Someone organized friends to park their cars in the neighborhood so the protesters didn’t have an easy way to drive up and congregate. Many of the Kelley family’s neighbors have made their own signs of support that stand in front yards in defiance of these bullies’ actions.

“One of the volunteers said it was a bright moment during an uncertain time. They got to reach out to neighbors in person and let them know that they were not alone,” said DeVries. “That is crucial in breaking the perception that extremists have a lot of power.”

As the Roots and Lamb protests wear on, this group of courageous moms want to make sure they keep providing support, too. More plans are in the works for yard signs, gratitude rallies, letters to the editor, and other pro-public health action items.

Rejecting Extremism - Again
This isn’t the first time that Bozeman has come together to say no to dangerous people trying to raise their profile in Bozeman. Back in 2005, white nationalist Kevin McGuire dropped racist flyers in the valley, tried to start a chapter of the white nationalist group National Alliance, and ran for the Bozeman school board.

Once the word got out about his agenda, there was no hesitation. The Gallatin Valley Human Rights Task Force (no longer active) organized a Martin Luther King Day parade attracting more than 1,000 people and created a campaign titled “All Are Welcome Here.” McGuire was utterly defeated in the election, getting only 157 votes while the winning candidates received more than 4,000.

Since then, Bozeman has come together when white nationalists dropped anti-semitic literature in a neighborhood in 2017. Instead of looking the other way, community organizers spoke up, gathered, and condemned the actions at a peaceful rally downtown.

“When these terrible things happen, it’s easy to think that ignoring the situation will starve these extremists of attention, but it doesn’t work like that,” said McAdam “Communities must push back against Bundy and his supporters so they can’t divide the community, target our neighbors, and get to the armed conflict they ultimately desire.”

Right now, the community is holding together, and Bozeman moms are leading the way. Instead of using weapons, they are wielding kindness and a commitment to the well-being of everyone’s children.

The Montana Human Rights Network  is a grassroots, state-based human rights organization in Montana working to promote democratic values such as pluralism, equality and justice; challenge bigotry and intolerance; and organize communities to speak out in support of democratic principles and institutions.