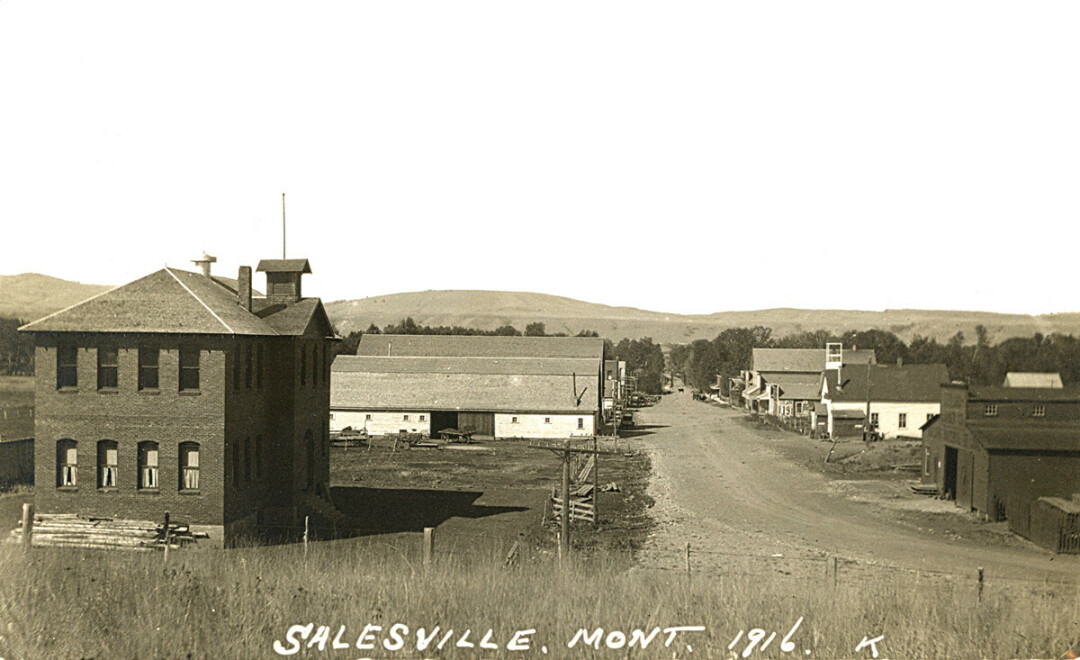 The community of Gallatin Gateway is one of the older settlements in Gallatin County and had its beginnings in the 1860s. Zachariah Sales relocated his family from Wisconsin to the Gallatin Valley in 1865, and they began ranching. Because of the abundance of timber in Gallatin Canyon and convenient waterpower from the West Gallatin River, Sales soon established a sawmill. Crews floated logs down the river to be processed at the mill, and the resulting lumber was used to construct buildings in Gallatin County and as far away as Virginia City, Montana. The little town that sprang up around the sawmill was initially called Slabtown – named for the unfinished wooden planks used in construction of many of the local buildings. Population steadily increased as mill workers moved to the area, joining local ranchers and their families.

On July 13, 1883, Slabtown’s name was changed to Salesville, in honor of Zachariah Sales. Prominent local resident and businessman John J. Tomlinson drew a plat of the town, which included eight streets—Tracy, Bozeman, Mill, and Sales (running east-west), and Lynde, Adams, Webb, and Bench (running north-south). Like Zachariah Sales, Tomlinson was an entrepreneur. He established a flour mill, located approximately one mile north of Salesville. Tomlinson was also community-minded, and in 1885 he donated several lots near the northwest corner of Bozeman St. and Adams St. for a church. He acquired the old Zachariah Sales sawmill in about 1900, and according to the book, Salesville and the Todd Family, Tomlinson maintained the old water wheel at the mill as a community feed grinder. Additionally, a wood saw remained in operation during this time so that local residents could cut their own firewood to convenient lengths. Zachariah Sales’ old sawmill was eventually demolished in about 1915.

A variety of businesses soon emerged in the young community. L. W. and Molly Orvis established a grocery store on the corner of Mill St. and Lynde St. The Orvis store later expanded to sell hardware and dry goods and eventually included a post office. In about 1906, Charlie Overstreet founded a livery stable and Alex Shadoan started the Salesville Mercantile Company. Other early businesses in town included a drug store, hotel, blacksmith shop, barber shop, meat market, and saloons. In 1913, the community also briefly had its own newspaper called the Salesville Weekly Times.

The Salesville State Bank was built in about 1910 on the south side of Mill Street. The bank had close ties with Harry W. Child, Charles Anceney, and the Flying D Ranch. Harry W. Child helped establish the Yellowstone Park Transportation Company in 1892 and managed several hotel and transportation concessions in Yellowstone Park. Charles Anceney, his wife Marie, and their children arrived in the Gallatin Valley in 1864 and started a ranch south of present-day Manhattan. Anceney was a French immigrant who Americanized his last name, Anxionnaz, upon his arrival in Montana. In 1911, Charles Anceney and Harry Child partnered to form what would later become known as the Flying D Ranch. The Flying D was a prominent customer at the Salesville State Bank until the bank dissolved in 1929. The brick bank building later housed the Old Faithful Inn bar, known today as Stacey’s.

Formal education began in Salesville in 1883, with the establishment of School District No. 35. According to local histories of the area, class was initially held in Zachariah Sales’ sawmill and the teacher’s salary was $40.00 per month. For the rest of the nineteenth century, Salesville school held classes in various one-room framed structures. In 1902, School District No. 35 acquired its own property on the south side of Mill Street, on land at one time owned by John J. Tomlinson. A larger frame school building was built on this new site, which was used until a brick school was constructed in 1914. The one-room frame schoolhouse was moved across the street to the northwest corner of Mill Street and Webb Street. A cheese factory later operated out of this building, and the frame schoolhouse still stands in this location today.

Thanks to the area’s wealth of natural resources, associations with families like Sales, Tomlinson, Child and Anceney, and a close proximity to Yellowstone National Park, Salesville grew steadily in the twentieth century. Electric rail service to the region began in 1909, when the Gallatin Valley Electric Railway completed a track that stretched south and west from Bozeman. By October, local residents and ranchers enjoyed freight and passenger service directly to Salesville. Within only a few years, additional track connected Three Forks, Belgrade and Manhattan with Bozeman, Hot Springs, and Salesville. This new interurban line allowed farmers and ranchers to easily and quickly transport grain, hay and livestock to the main Northern Pacific and Milwaukee Railroad lines in Bozeman and Three Forks. Passengers from across the Gallatin Valley could now travel with ease between area communities. The Milwaukee Railroad soon took over ownership of the interurban line and use continued until 1978, when the Milwaukee finally ceased operating in Gallatin County.

In 1926, the Milwaukee Railroad ushered in a new era for Salesville with the introduction of bus service through Gallatin Canyon to West Yellowstone. An impressive log archway, designed by Bozeman architect Fred Willson, was erected in Gallatin Canyon and dedicated in August 1926. The Bozeman Courier newspaper reported on August 6, that several hundred people attended the dedication. A “be-ribboned bottle of water from Yellowstone Lake” was used to christen the unique gateway structure. The Gallatin Gateway arch was located near the north end of the Canyon, between Spanish Creek and today’s Rockhaven camp. Additionally, Milwaukee Railroad officials prepared for the coming bump in tourism by improving the railway branch line from Three Forks to Salesville. To celebrate its new status as a major Yellowstone Park “gateway” city, Salesville officially changed its name to Gallatin Gateway on March 1, 1927. The Gallatin Gateway arch impressed early motorists through the canyon for a couple decades until highway widening led to its removal. 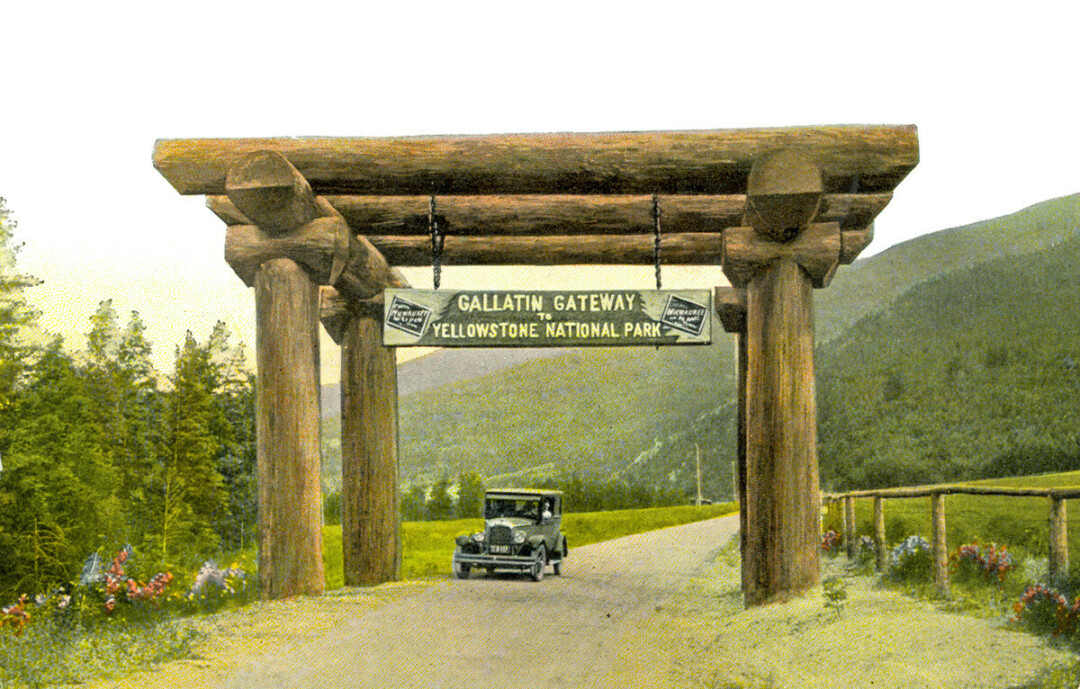 As part of the improved access route through Gallatin Canyon to Yellowstone Park, the Milwaukee Railroad built the Gallatin Gateway Inn. Situated just northeast of Salesville, construction of the Inn began in February 1927. Workers completed the mammoth structure in record time, and the grand opening was held only four months after construction began, on June 17, 1927. Montana Governor J. E. Erickson and Northern Pacific and Milwaukee Railroad officials attended the opening festivities, which included a morning presentation in Bozeman and a trip down Gallatin Canyon. An open house was held at the new Gallatin Gateway Inn, where, according to the Bozeman Courier on June 24, “the largest crowd in the history of the county gathered in the evening to admire the structure, partake of the dainties and enjoy the dancing.” The Courier reported that “between 10,000 and 20,000 persons” attended the festivities—an almost unbelievable number. Even if the attendance figures were slightly exaggerated, it is certain the day-long event was well-attended. It is clear Gallatin Gateway’s new connection with Yellowstone Park was a big deal. In all the excitement that evening, the crowd at the Inn did get a little out of hand. The Courier lamented, “scores of over-enthusiastic visitors took advantage of the hospitality offered to obtain souvenirs, carrying away silverware and dishes and whatever other small objects that came handy. One of the rugs belonging to the hotel was stolen, and during the crush considerable damage was done to rugs, furniture and fixtures. The total loss, it is reported, will run well over $1,500.”

The Gallatin Gateway Inn cost a quarter of a million dollars to build and it was considered one of the most elegant hotels in the state in the 1920s. Milwaukee trains carried travelers as far as the Inn, where passengers disembarked to relax and dine while awaiting a bus trip through Gallatin Canyon to West Yellowstone. Many tourists chose to stay overnight in one of the 26 guest rooms and took advantage of the modern showers to clean up after their long journey. The Inn was well-staffed by young men and women, many of whom were students at Montana State College. Employees spent their summers earning tuition money as employees of the Milwaukee Railroad, working as maids, cooks, drivers, and luggage handlers.

The Milwaukee Railroad and the Gallatin Gateway Inn eventually found it hard to compete with automobile popularity and a steadily improving road through Gallatin Canyon. The Milwaukee sold the Inn in the early 1950s, and while the property has passed through several different owners, it still stands today as a reminder of Gallatin Gateway’s involvement in early travel to Yellowstone National Park.

The Gallatin Gateway story is still evolving. Despite rapid growth to the area, the community has been able to hold on to many elements of its historic past. Gateway’s Willing Workers Ladies Aid society celebrated its 100th anniversary in 2012, the old 1914 brick school building remains the core of School District No. 35, and Stacey’s Bar is still the place be on a Saturday night. We look forward to the next chapter in Gallatin Gateway’s history book.