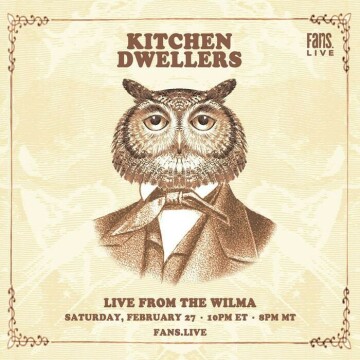 Shawn Swain: I heard you had some some questions for us.

Bozeman Magazine: Well, you know us at Bozeman Magazine & Ripple Sound have noticed that you guys were killing it the last couple weeks with the Billy Strings show and your upcoming one at the Wilma Theatre and we just wanted to touch base, and congratulate you guys on finding a way to stay sustainable in the pandemic.

So if you don’t mind one of the things that people are asking is if you guys as a band the Kitchen Dwellers think you’ll ever have your own festival some day in the future?

Not this year obviously, but maybe five years down the road or something, whenever it’s safe and everything’s normal again. Do you guys ever envision having your own Festival like a Del Fest or something?

SS: It’s always seemed like something that is hard to do with the schedule that we’ve had. I believe in time, and quite frankly we just have not really committed. But, yeah I think we’d like to and do see it as a possibility down the road. We also, you know, live in such a cool place to be able to throw one. It’s just not something that we’ve ever buckled down to do 100% I would say, but it is it’s one we’re interested in. Absolutely. There’s just nothing in the works yet, nothing’s set in stone but it is really important to a lot of our fans and that community is something they really thrive off of so, we hope to see that returning for sure.

BM: Another question from a fan here has to do with you guys and Twiddle and how you’ve played lots of shows even in Bozeman at the Eagles, as well as lots of other places around the country. From the outside, you might not suspect that the Kitchen Dweller’s and Twiddle would be paired together or buddies on tour, so how did that come about, and what’s unique about that relationship?

SS: Well it all started because when they first came to Bozeman in like 2012, I think we were the only people at their show. So, naturally they just came over to my house afterwards and hung out and we became fast friends and one thing led to another and we were able to collaborate with Mohali and he recorded on my songs “visions of more” on “Ghost in the Bottle.” Since then we’ve toured together with both bands a few times and have done a lot of stuff together. We developed a good friendly relationship and we found that it’s easier to tour with your friends than it is to not, and then also at the same time, it’s really cool to bring two really different ends of the musical spectrum to one show and see people vibe off both and it speaks of this is all one language.

BM: Speaking of that, are there some musical influences that we might not suspect or know about, maybe not in the Bluegrass genre?

SS: Yeah. - you know, I mean, I like to listen to a lot of country. I’m not really into top 40 country music but more like the stuff that came before that. And everybody in the band kind of has a different musical background, I would say that Max has a lot of classic rock influence and that’s what he grew up listening to. I grew up listening to a lot of the Grateful Dead with my parents. So that’s there. But that’s obviously a suspected influence. I would say everybody kind of really loves punk rock music and Joe’s actually got kind of an electronic background. He used to go see Pretty Lights all the time.

BM: Nice. I mean like you said, it’s all one language. I don’t want to put you on the spot, but I remember hearing a long time ago that you mentioned loving Metallica like as a kid in high school.

SS: Yeah. It is all one language. Some of those early Metallica albums are badass, dude.

SS: It’s pretty unreal for what they’re doing. They were also like 17 years old.

BM: Yep, every so often somebody that comes along blows our minds or shifts the paradigm or whatever, you know, like Eddie Van Halen.

BM: Yeah for sure. That’s what he’s done in the jam band scene. I mean it doesn’t matter which band you follow people are just like whoa, that kids good.

SS: Yeah for sure.

BM: So here’s a funny one from a fan. Being a bluegrass band you guys are not completely unique but somewhat unique in the fact that you guys have your pedal boards. Whose pedalboard is the biggest and what does that actually mean?

SS: Laughs, Joe’s. Because he’s running two pickups in his instrument and he’s got the most unique effects that were built for him. He has a 35 inch pedalboard and mine is 24-inch. It’s just because he has a more elaborate set up to capture all of the tonal qualities of the bass. So he requires more preamps and more lines?

BM: He has the biggest pedalboard so it’s for a technical reason and nothing else.

BM: But it’s not like having a big pickup truck?

SS: No, no, okay. No, he needs all this stuff and it’s obnoxious. A big jam band, their pedal boards are crazy.

BM: Well, yeah some definitely are just insane, even a couple people in Bozeman have those. Here’s one it’s from somebody that calls themselves New Hampshire band parents. Do you always eat over the sink? And do you like us?

SS: Probably breakfast a lot because I’m going somewhere and yes, I do like them. They’re great people. That was funny, I love that question.

BM: So really though the reason we were talking today is to congratulate you guys on the show from last week with Billy and just to Hype up this show at the Wilma. What do you have to tell us about that?

SS: You know playing the Wilma Theater for our own headlining shows has obviously been something we’ve always wanted to do. It’s a shame that it took the pandemic and literally no crowd for us to be able to do it. It’s definitely an epic space to get to play and you know, I think it is probably, well definitely, Montana’s most Musical room. It just feels good. It kind of has a real feeling of being home and I hope to get to play there again, you know for an audience, but even when it is empty it sounds incredible.

BM: Well, yeah, you’re right. It is one of the most beautiful theaters for music in Montana at this point. And it is definitely a shame that the first time you’re going to play there is to a livestream crowd, but people are going to tune in and it’s going to be pretty awesome.

SS: Yeah either way, it’s a big production. Frank Douglas Jr is going to be doing all  his big lights and it’s going to look like a large production.

BM: So where do people need to go to get a ticket or to watch it?

BM: Cool, well you guys have a great time and we will be watching.