In January of 2020, Bozeman Actors Theatre (BAT) began rehearsing a production of Naomi Iizuka’s Polaroid Stories, intending to stage nine performances in April of 2020. Rehearsals were well underway when Covid-19 reached Gallatin County, and by the end of March it was clear the performance couldn’t go on. The show had been set with a cast and crew of 15 who had auditioned, been cast, and arranged their lives so they could commit six weeks of rehearsals and 3 weeks of performances. When April came and went, BAT decided to try again with a June performance; agreements were made with the cast and crew to reflect the new dates, and rehearsals were scheduled to begin, when an unexpected surge in Covid-19 cases caused the show to be postponed once again.

It has been a long difficult year for theatres and actors. Shows have been scheduled, postponed, rescheduled, postponed, rescheduled again, and postponed yet again. Actors chased their dreams, subletting their apartments to follow their work, only to find their performances canceled when they got to the theatre. The pandemic has been brutal to the performing arts this past year, just as it was in Elizabethan England during the time of plagues when theatres were closed, shut down and locked up for weeks or months at a time, sometimes for several years. Bozeman Actors Theatre can relate to these woes that Shakespeare, Ben Jonson, Thomas Middleton, and other playwrights of the 17th century experienced. But on March 4, BAT is coming out of this quiet time and opening its doors to live audiences again for the first time since February 16, 2020, when the curtain fell on their last production of Wait Until Dark. On March 4, BAT raises the curtain once again with its production of Iizuka’s Polaroid Stories.

What is it like to be in a theatre company that gets shut down only days or weeks before opening night? Every theatre company has their own stories. Bozeman Actors Theatre’s Mark Kuntz, director of Polaroid Stories, talks about the thought processes that went through his mind as he debated go or no-go with each attempt.

“It’s awful,” Kuntz says, “One feels like you’re letting the whole community down; all our actors, all our crew, our donors, our sponsors, and our entire audience are looking forward to seeing this play!” 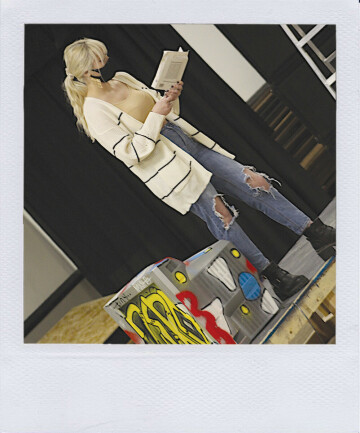 The indecisiveness, the lack of clarity was all-consuming for the director and the company. There was no clear road map, no decisive way to deal with this crisis. Audiences were desperate to see live theatre again, but not at the expense of their health. Because of the lead time required for contracting with cast and crew, acquiring venue space, rehearsing, and designing the set, lights and sound, making decisions required several months advance planning before a production could be staged. Kuntz felt a deep concern and responsibility for his actors, for their safety as well as for their economic well-being. The decision to postpone, reschedule, start rehearsing, or send everyone home and look to a future date became a daily discussion about the safety of the cast and crew versus the desire of audiences to see live theatre, alongside Kuntz’s need to satisfy his own creative energy. There were constant assessments to determine what was known or unknown in terms of Covid-19 behavior and how this could impact running a show. The economics of the theatre world seemed to hinge on successfully running a show— or not.

After much reflection and discussion with the cast and crew and the BAT board, Kuntz decided to go ahead with the show, aiming for a March production in 2021. Then it was on to quickly fill the empty spots in the cast and crew rosters. In a year’s time, things change, and some had moved on to other projects, a few were still unsure about the wisdom of moving ahead with a production, others had taken on new jobs, but many of the cast and crew originally hired for this production were enthusiastically still on board for another go at this show, and so the decision was made: “The show must go on.” 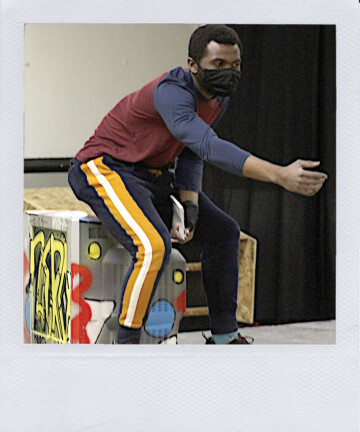 So why Polaroid Stories now? It is a time more important than ever. Polaroid Stories is a play based on the famous classical Roman historian Ovid’s poem Metamorphosis, a story about change. Playwright Iizuka used Ovid’s story as a foundation in which she could talk about change and transformation. Kuntz chose to set this production in a modern inner-city environment, where a community of homeless young people search for their own identities, trying to find their place and purpose in this world. This theme turns out to be especially powerful in a post-pandemic world--a world in which a new administration attempts to find a way forward in the midst of economic and political chaos, a world in which human detritus litters the terrain with human casualties of families and individuals that have been polarized and separated from the society which existed pre-Covid19.

Kuntz says “A dazzling and diverse cast of Bozeman, Atlanta, and Chicago-based artists bring these stories to life in the Eagles Ballroom for nine performances in March, as Bozeman Actors Theatre rigorously follows safety protocols and health guidelines to present Bozeman’s first fully-produced piece of live indoor theater since the pandemic began, inviting intrepid yet limited audiences to witness the naked power of live storytelling, so notably absent from our lives of late.”

Kuntz is quick to point out that his version of Polaroid Stories uses dance and movement in a significant way to help tell the story. BAT hired a choreographer from Atlanta to teach hip-hop dance moves to the actors, using the liquid movements of hip-hop artists to accentuate the text. This works well, breathing new life into Ovid’s Metamorphosis, through the lens of playwright Iizuka’s script and Kuntz’s directorial choices.

Polaroid Stories is scheduled to run Thursday, Friday, and Saturday evenings from March 4 through March 20 at the Eagles upstairs ballroom. All performances begin at 7 p.m. Tickets will be available as advance sales only, no ticket sales at the door, in an effort to provide more safety in the face of the coronavirus. Ensuring everyone’s safety is BAT’s first priority; audiences and cast alike will be required to take precautions laid out by the CDC and local health officials. Mask wearing, social-distancing and contactless check-in are just some of the ways BAT will ensure this performance will be a fun and safe event for everyone.

Tickets can be purchased at www.bozemanactorstheatre.org/tickets.