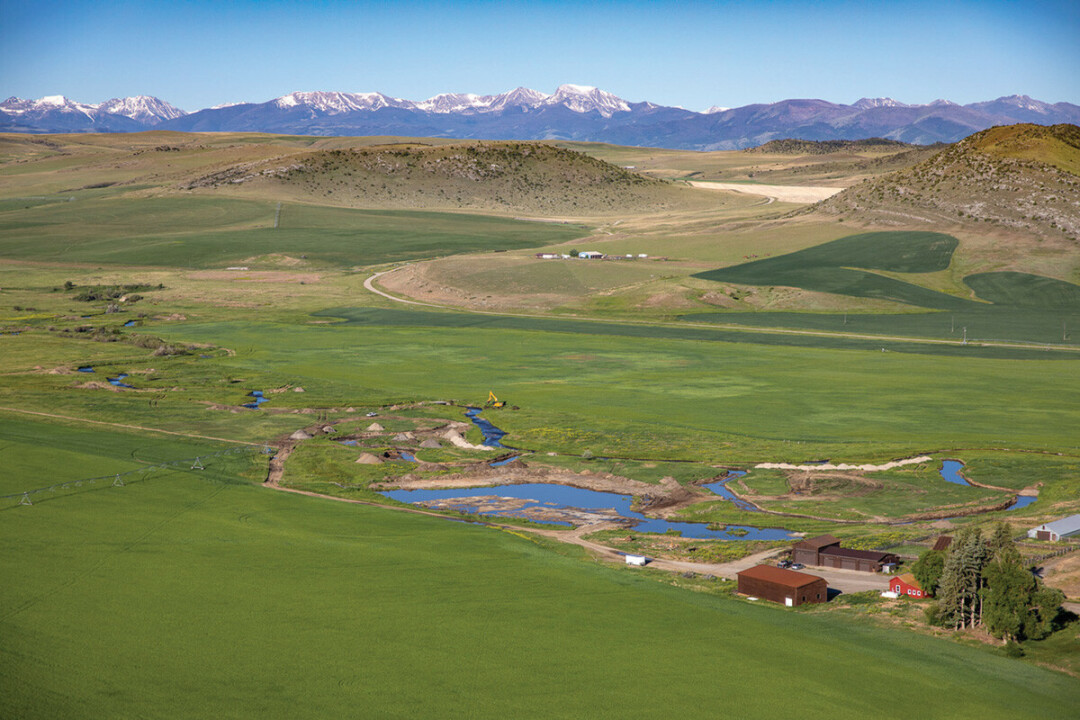 One year ago, the Covid pandemic shocked most of us when we suddenly were confronted with shortages in grocery stores, restaurants were shut down, and food became a source of concern. Faced with this sudden and totally unexpected development, many Americans rediscovered something so many of us had forgotten: cooking at home from scratch. Amongst the homemade sourdough bread, the stews and soups, and the delightful meals we started making in our own kitchens, many of us began to think about nutrition and the quality of our food, quickly precipitating thoughts about the way our food is raised, which leads to thoughts about our farms and ranches.

How our land is cared for, how our food is raised, caring for our communities, fighting climate change, and eating healthy food are all closely entwined; each one impacts the whole. This is the shared philosophy of several agricultural companies in Bozeman that are addressing this connection between the health of the land and the nutrient content of the food they produce. Baxter Creek Farms engages in regenerative agricultural practices to produce grass-fed beef; Beartooth Group restores environmentally compromised farmlands, remediates damaged wetlands and waterways, and sells their farms and ranches to conservation-minded farmers, and in the process offers their own grass-fed beef for sale through another company, Philosopher’s Beef.

Baxter Creek Farms was originally founded in 1894, when J. R. and Willemina Kimm bought a farm south of Churchill, Montana, on Godfrey Creek and began raising beef cattle. In the years since then, the farm has been passed on through the family to today’s 5th and 6th generation family farmers, who renamed the operation “Baxter Creek Farms.” Michael and Kathleen Cok (5th generation) own the farm today, with the day-to-day operations managed by their son Dylan and his wife Tiffany.

Baxter Creek Farms’ primary focus has become the sustainability of the agricultural operation through good ecological farming practices: preserving the health of the soil, protecting the water, and producing food that is nutritious, healthy, and tastes great for the consumer. They do not feed corn, give antibiotics, nor inject their cows with hormones. It is their mission to produce healthy and nutritious food while maintaining the integrity of the water and soil so one day they can pass on a sustainable legacy to future generations. 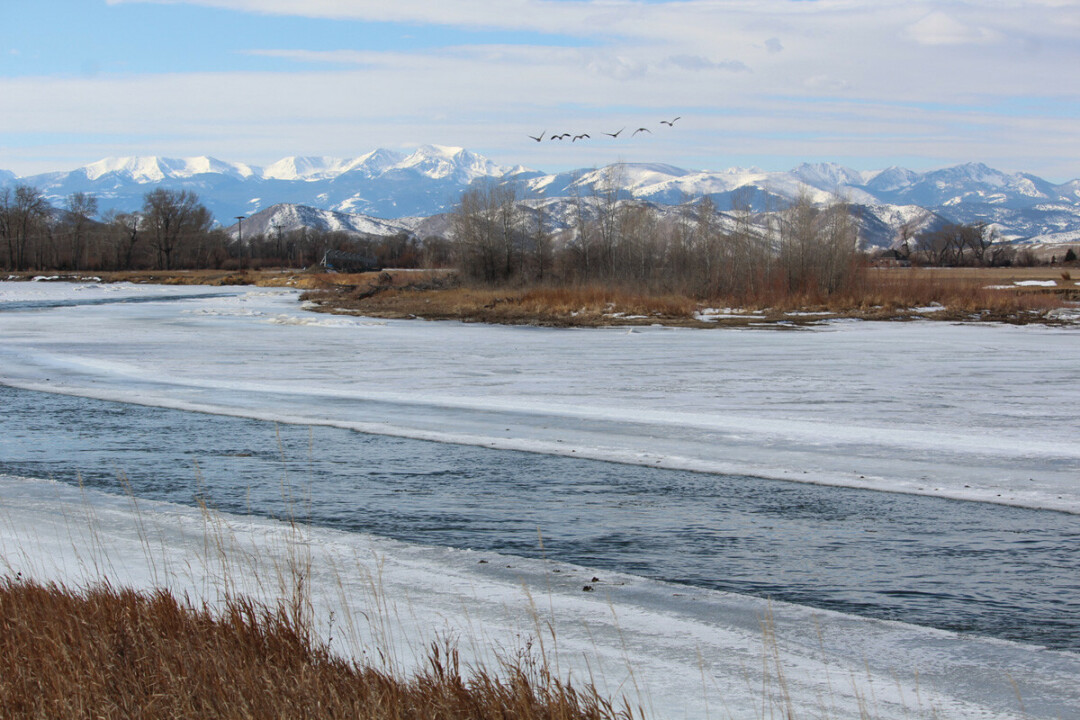 Today Baxter Creek Farms profitably raises cattle on the same farm that Cok’s great grandfather did in 1894, without growth hormones, antibiotics or drugs, on land that does not get commercial fertilizer or chemicals. A major epiphany for Cok occurred while visiting a mountain farming village in western Uganda several years ago. While walking through the bananas, cassava, and other crops clinging tenaciously to the steep mountain side, he noticed where the soil was uncovered and bare, the erosion was severe; where the farmers kept a groundcover, the hillside continued to produce. Back home he started reading and researching, came across the ideas of “Regenerative Agriculture,” and soon began following those principles on his own farmland. Cok planted a mixture of nine different varieties of plants on his fields that gave groundcover while providing healthy grazing for his cattle; at the same time the varieties put nutrients back into the soil. Then he divided these fields into smaller paddocks, and as the cattle would quickly graze one paddock, he would move them to the next in a rotational grazing pattern. By following this method, he eliminated the use of commercial fertilizers and herbicides completely. He noticed quickly that the cattle were more contented, healthier, and still maintained their growth rates.

John Zumbro, a Health and Fitness Consultant, says, “When cattle are managed optimally in this sort of ranch environment, the result is beef that is higher in protein, Vitamin B3, Vitamin B6, Vitamin B12, selenium, zinc, iron, phosphorus, and many other micronutrients than most foods. Compared to beef raised industrially in confined animal feeding operations, grass-fed beef is much higher in inflammation-reducing omega-3 fatty acids while being lower in omega-6 fatty acids.” Zumbro says this applies exactly to Baxter Creek Farm’s beef.

Baxter Creek Farms now markets their grass-fed, grass-finished beef through Heebs grocery store in Bozeman, and direct sales of their live cattle to anyone who wants to order quarters, halves, or full beeves. For more information about purchasing Baxter Creek Farm’s beef, please visit their website at www.baxtercreekfarms.com.

Beartooth Group, a conservation-minded investment group headquartered in Bozeman, has a mission to restore, enhance, and steward farms and ranches in the American West through investment in people and places, encouraging the use of regenerative agricultural practices, and in the process making high quality grass-fed beef available.

Beartooth Group founder, Robert Keith, and his ranch manager, Tom Groneberg, grew up in midwestern cities, far from the agricultural world they both inhabit today. Both men came to the Intermountain West with their families when they were children, imbuing them with a passion for the land, the people, and the lifestyles of the American West.

Keith’s vision for Beartooth was realized when he met Groneberg. Their strategic goals for Beartooth’s success began with the observation that the land that makes up Montana and Wyoming ranches was originally grazed by bison. Bison, in their nomadic ways, move constantly with their hooves grinding up plants and churning up the ground, mixing the plants and their own manure into the topsoil as they graze their way across the countryside. Rather than hurting the plants and soil, this churning and pulverizing of the plants, soil, and manure improves the soil health. In the process, it captures carbon and stores the captured carbon in the soil. This mixing of soil, manure, and plant material creates healthier grazing lands, increases water infiltration rates, improves grass growth, which in turn produces healthier, more nutritional beef. Keith says of Beartooth Group’s mission, “our goal is to preserve farms, ranches and communities with our triple bottom line: people, place, and profit.”

But Beartooth is really interested in restoring farms and ranches that have been damaged environmentally. In pursuit of profits, some conventional farms straighten out creeks and waterways, turning them into straight-line pollution-filled drainage ditches; wetlands are drained and natural springs are plugged in efforts to gain more tillable acres. With more tillable acres, herbicides and pesticides get applied, often in heavy doses that eventually can poison the land.

Finding these farms and ranches that are in need of remediation and restoring them to a healthy status (and profitability) begins with searching available inventory of farms and ranches and doing an environmental assessment to determine the work that is needed to correct environmental damage. Often this work requires collaboration with hydrologists and organizations such as Ducks Unlimited or Trout Unlimited to develop a restoration plan for the land. Restoring a farm or ranch often involves removing old buildings, junk piles, restoring creeks and waterways to their original natural meanderings, replanting native grasses and trees, and creating a grazing plan that involves the constant moving of cattle from one spot to another, mimicking the ancient traditional movement of the plain’s original bison inhabitants.

An example of the work Beartooth Group does can be found in one of their farms, Willow Creek Preserve, near Three Forks. Finding the land had been systematically exploited and degraded by draining its wetlands, filling in natural springs, draining raw sewage directly into Willow Creek itself, and overstocking a confined cattle feedlot, Beartooth restored two miles of Willow Creek to its original meandering path, removed the sewage line, cleaned up a dump, and replanted fields to native plants, restoring the original balance of nature. After several years of remediation, the creek runs clean and trout once again populate its waters. Geese flock to a restored wetland adjoining the creek, and cattle can once again graze peacefully on restored native lands. On a hillside overlooking the ranch, solar panels have been installed to offset energy usage. 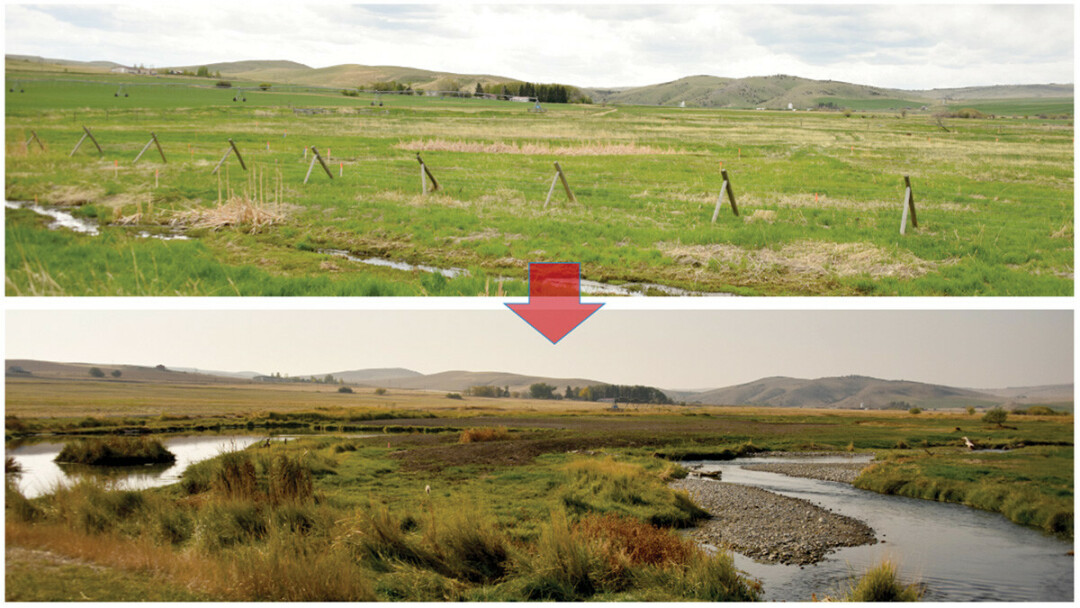 creek before and after photo: Robert Keith

It can take two to five years to restore and remediate a damaged parcel of ground. Once the land has been restored, it will be offered for sale to conservation-minded people who will continue to manage the property according to similar farming values. Some of the buyers of these properties have not been farmers before, but they take pride in owning such restored property and become part of the rural community.

One of Keith’s motivations in pursuing ranch restorations is his passion for quality beef that has been raised on grass. Michael Pollan’s book Omnivore’s Dilemma, in which he discusses how unnatural it is for cattle to be finished on corn, antibiotics, and growth hormones was a major influence for Keith. Often the corn fed to these cattle has been raised under an irrigator in one state, then trucked across the country to feedlots several states away where the cattle are finished, slaughtered, and processed before being shipped back to grocery stores across the United States. Keith believes that cattle that are grass fed locally on native grasses that have not been commercially fertilized and chemically treated to control weeds, are harvested and eaten locally will make for a much healthier diet for consumers.

Out of this conviction, Keith started “Philosopher’s Beef,” a company that owns and grazes cattle on one of their locally restored ranches west of Bozeman. Philosopher’s Beef markets these sustainably raised cattle to consumers through their website. Their cattle spend their lives on restored ranchland just west of Bozeman on Willow Creek. This river flows from its headwaters on the west slopes of the Tobacco Root Mountains to the Jefferson River. Willow Creek was originally named “Philosopher’s River” by Captain William Clark in 1805, when he camped at the junction of this river with the Jefferson River on the night of July 26th, 1805, as the Lewis and Clark Expedition passed by on their way to the Pacific Ocean.

For those interested in more information about Beartooth Group and to see examples of the restoration work they have done, or for purchasing a restored ranch from Beartooth Group, please visit their website at https://beartoothgroup.com. For more information about purchasing beef from Philosopher’s Beef, please visit their website at www.philosophersbeef.com.

Uncommon Beef: A Female Rancher is Called to the Land