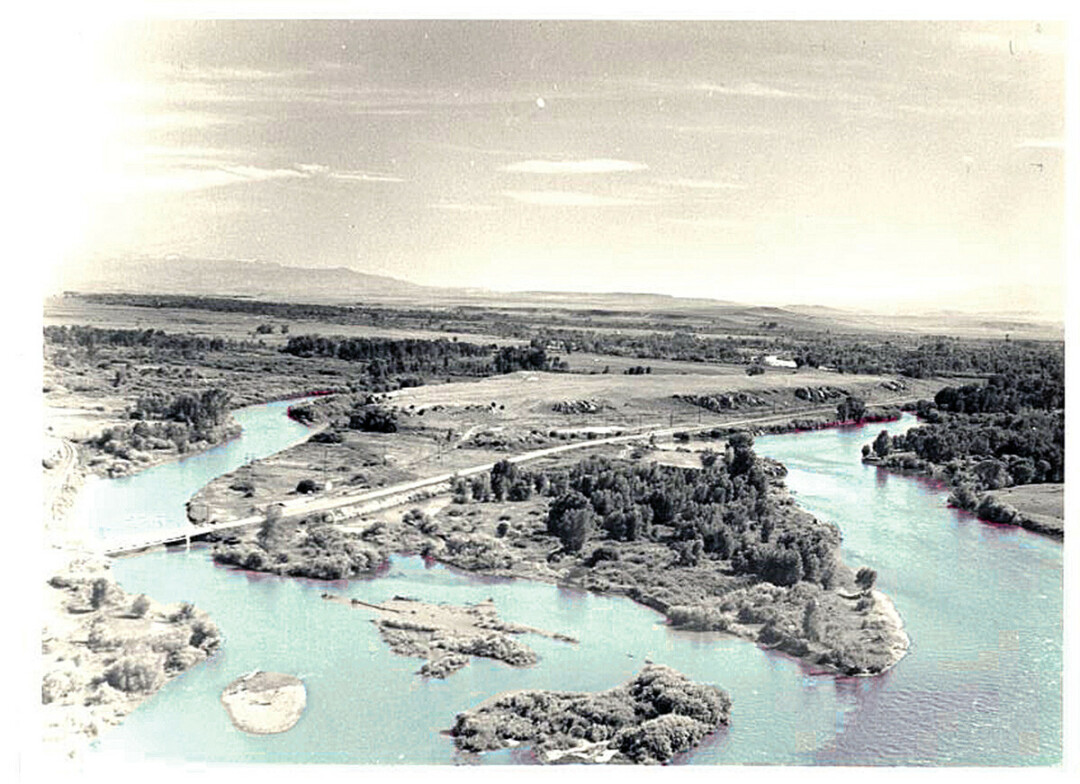 On the 4th of July 1920, a farmer fishing the Madison river about six miles above Three Forks came across the grisly scene of a body lodged in a pile of driftwood. Stripped of most of its clothing and much of its flesh, the body was difficult to identify. Collar bands still attached around the man’s neck contained laundry marks, which led authorities to a laundry in Norris. The bands had remained intact due to a gunny sack, which had been tied about the dead man’s head with a rope before he had been put in the water. A study of the man’s teeth revealed heavy gold fillings which it was hoped would help lead to a positive identification. Perhaps the most startling discovery, however, were two bullet holes through the man’s head, indicating clear foul play. A few days later a coroner’s jury hesitantly confirmed rumors that the body was in all probability that of Harry Walker, a ranch hand who had gone missing on New Year’s Eve 1919. Walker’s car had been discovered in February, also in the river, but his body had not been inside. Death had been caused by the gunshot wounds “by persons unknown” and “at an unknown time and place.” Tracing the perpetrator would prove difficult; in fact, it would prove impossible.

The case would remain quiet until January of 1922, when suddenly a Mrs. Laura Adams, proprietor of a rooming house, of Three Forks was arrested for the crime. The details of her arrest were at first cloudy. It seems Walker had been a boarder at Adams’ house on occasion when he was in Three Forks. The complaint had been filed by the County Attorney E.F. Bunker, but according to Adams, this was just a ploy by her former husband to get her out of the way since she knew something of his shady business transactions. That seemed to be the only connection, and indeed the local Bozeman paper seems to have left the case right there, nothing can be found more about the woman’s involvement nor what the outcome of her current situation would be. A look at papers from Butte, where the murdered man Walker was from, and the Anaconda Standard detail much more of this interesting case.

The Anaconda Standard featured a full front-page headline and three separate articles describing the case in its January 4th edition. The spread included a composite image of Mrs. Adams and the boarding house which she ran where it was believed Walker had been killed. According to the paper, three motives had been proposed for Walker’s murder: “jealousy over a woman, premeditated robbery by a gang of murderers or a sudden display of uncontrollable temper in a card room brawl.” Each motive was then elaborated upon. It seems rumored that Adams (a divorcee of between two to four men) had recently become the fiancé of Walker, which had made certain men jealous of the seemingly popular Adams. The second, robbery, was indicated by several people who believed Walker had between $1,500 and $2,000 which he had shown in town on the night of the 26th. The third motive was made possible by a belief that Walker had been playing cards at the Adams hotel on the night in question. It was only very briefly mentioned that Adams, his possible fiancé, may have killed Walker herself at her establishment. A motive for this last possibility was established by a William Miller, a manservant of the hotel, however his story was not shared in the paper. It does seem like it was on his word that Adams had found herself arrested for first degree murder. However, it was also believed that Walker had not been to the hotel that night and that Adams had been ill in bed for days before and after Walker’s disappearance. If this is true, the motive for Adams killing her fiancé and that of a rough card game at the hotel are both an impossibility, which leaves jealousy and robbery.

However, the Augusta News of Augusta, Montana, seemed to know more about Adams’ possible motive and involvement. In this telling of events, it was believed that robbery had indeed been the motive. According to this story, Walker had been celebrating at a New Year’s Eve party at the Adams hotel when the latter and her fellow men realized the amount of money Walker had on his person. They had murdered him in the house then done away with the body and his car. This seems to be the reason why Adams had been arrested and perhaps was a better telling of the story by which William Miller was being held as a witness. At the telling of this story, it seems Mrs. Adams had claimed Walker had committed suicide as he had left a note behind at the Sloan Ranch stating he was going away, and all his money was to pay his debts. However, it seems unlikely Walker put a gunny sack full of rocks over his head after he was dead.

For ten months following the discovery of Walker’s body, detectives had been working as undercover ranch hands among the men suspected of knowing something about the case. The culmination of their work had been the arrest of Adams, although still, the motive and means by which she would have committed the murder were unclear to the public. Several men were under surveillance, including two men who had visited the Sloan Ranch, where Walker worked, that night asking him to accompany them to town. In this latter investigation, it was proposed that the two men had picked up Walker and a rifle at the Ranch. A rifle belonging to Sloan was indeed missing. On the way to Three Forks, the man riding in the back seat had shot Walker twice while the other drove. The car was driven over a 100-foot embankment into the Madison and a gunny sack full of rocks had been tied about the dead man’s head to keep him securely at the bottom of the river. The motive could have been either jealously, as one of the men had shown signs, or robbery of the large amount of money Walker had. However plausible this scenario is, it was Mrs. Adams who was under arrest, not either of these men indicated.

This confusing case becomes even more convoluted when it was announced in an article running parallel to the one on possible motives in the Anaconda Standard titled “Depicts murder Scene as Given Her by Occult.” A correspondent of the Standard was on the scene at the Gallatin County Jail where Adams, in a large room, sat with an arm around both of her children proclaiming her innocence and describing the murder as told her by a spirit medium from Willow Creek. According to Adams, the male medium, Moore, saw:

a high bank and said that he could see Walker approaching in his car…it was just before sundown when he [Walker] recognized two men fishing on a flat below. He thought he might get a drink with them. With one of the men Walker had previously had some kind of misunderstanding…when Walker approached he was attacked…and would have been able to defend himself ably enough had not one of them seized a gun and fired. The body was then done away with under a pile of brush in the river and the car run over the bank. One of the assailants was injured and was carried to a ranch house not far away.”

Adams was able to identify the two men the medium had seen and which of the two had pulled the trigger. According to Adams, she claimed she had “been arrested and charged with murder because the booze runners are trying to put me out of the way—just as they got rid of Walker.” She had indeed intended to marry Walker but had feared for her life if they had. It seems Adams had been married four times previously, the first had been annulled due to her husband already being married, her second was shot and killed while standing beside her at their home in Texas, and the third and fourth she had divorced, the last being a prominent rancher near Three Forks.

Despite all these different theories, it seems the crime could not be pinned on Adams or any of her companions. She would be released in March of 1922 and dismissed of all charges. Adams would continue to be of interest to the Butte Miner, which would print her corrections to facts that had been printed in various newspapers during the case. According to Adams, her second husband had in fact, been killed at his store while she had been in the back and she had used up nearly every cent of his estate trying to track down his killer per his request. She stated that she had never been apart from her two children from her third marriage until she had been arrested, and that she had never been in the company of Walker alone. She claimed to have only been near him twice and her children had been with her both times. According to Adams, “This has been my stormy career. I was the victim of blackmail and charged with a crime I had nothing whatever to do with. Since my arrest I have been constantly under a physician’s care.” This bold statement seems highly at odds with many parts of the case; if she had not been alone with Walker ever, how then was it assumed they were to be married and in fact, why did she once say she feared for their lives should they be married? And why did she see a medium about the case prior to her arrest if she had nothing to do with Walker and his murder?

The case would dissolve into nothing following Adams’ release until the summer of 1923 when Seth Orrin Danner was arrested for the murder of Florence and John Sprouse. While at the Gallatin County Jail, Seth made mention that he knew someone who knew something of the Walker case, but that they didn’t live about here anymore. This brief mention led to a re-examination of the case, to the point where Seth Danner himself was alleged to have committed the crime. After all, his supposed victim John Sprouse had also been discovered with a gunny sack tied over his head. Seth Danner likely had been located in South Dakota at the time of Walker’s death, making his involvement mute. The rumors quickly quieted in light of the dramatic Danner case and his eventual execution. The death of Harry Walker remains to this day, an unsolved murder. Laura Adams’ own murder in 1941 would end differently. Her killer would be sent to prison for life. To read about the Adams’ murder and many others look for “Murder and Mayhem in Gallatin County” to be released Fall of 2021. More tales of crime can be discovered in “Wicked Bozeman” set for a Summer 2021 release. (For autographed preorders go to mountainstudio308.com/history-books).