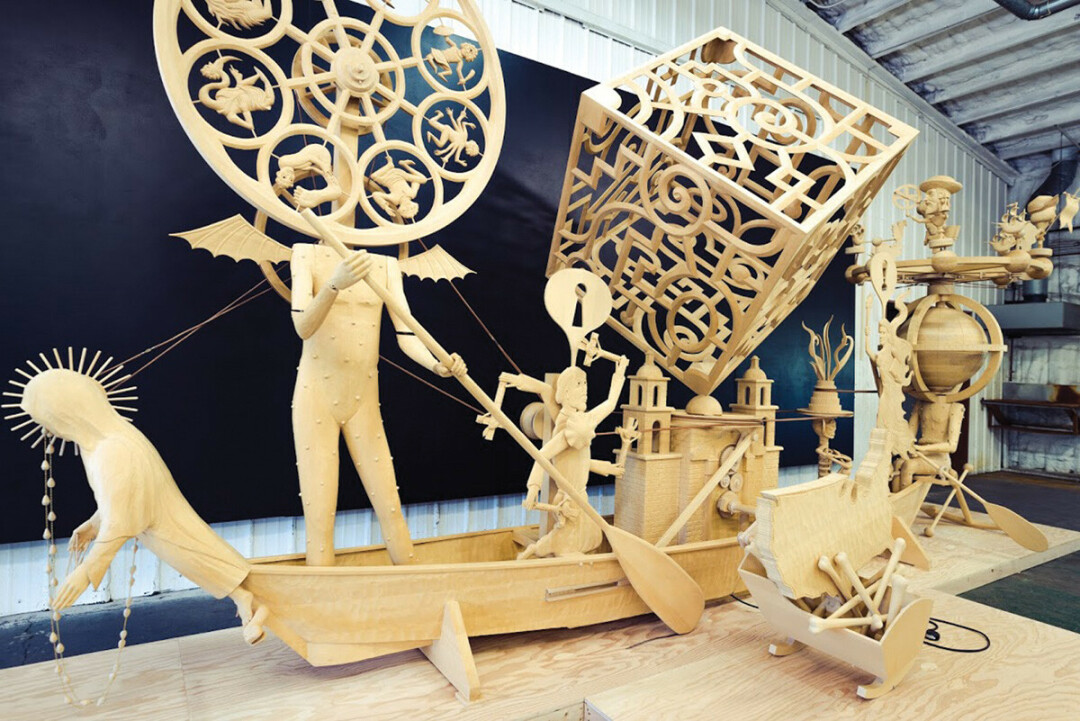 At a time when the Bozeman community is filled with one new development after another, leaving the citizens breathless at the pace of new buildings, roads, subdivisions, offices, condos and townhouses, one organization is actively seeking old unused spaces, repurposing them with a new vision of art that combines visual arts with performing arts. Tinworks Art was established three years ago with the mission of enriching the cultural and social fabric of greater Bozeman by supporting inclusive, immersive contemporary art experiences for artists and audiences in non-traditional spaces.

Founded by the nonprofit group Story Mill Art, Tinworks began in 2019, bringing together artists from across the Bozeman community and beyond to create works of art that reimagined the possibilities and identities that an empty building can contain. Through the efforts of these nationally renowned visual and performing artists, the old Tinworks warehouse located at 719 North Ida Avenue was transformed into a space where visitors experienced art in new and unexpected ways. For many years, this building served as a temporary storage for metal that was going to be used in the war effort of World War II. Before and after the war, this building housed a metal working and roofing company. The age of the building and its original purpose has served Tinworks very well in becoming their exhibition gallery for their first year.

Using old, empty industrial warehouses, Tinworks Art repurposes these old spartan buildings into art galleries showcasing innovative insightful works of art that cut across traditional artistic boundaries. While the original Tinworks building of 2019 is slated for removal and development of that ground, Tinworks Art continues to fulfill their mission by involving diverse artistic voices that produce thought-provoking works, enriched by being presented in other older historic buildings. In 2021, five of these artists were selected to receive sustaining grants in the amount of $10,000 each. Tinworks Art actively seeks to break down barriers that have historically excluded certain artists, art, and audiences from the important conversations that art provokes. This year, the grant focused on supporting indigenous artists, emerging artists, and those working with endangered forms of knowledge.

This year, Tinworks’ annual summer exhibition is titled “The Pursuit of Happiness,” exploring topics such as unity in democracy, individual and collective wellbeing, and lateral power structures. Tinworks has included workshops and interactive experiences to help viewers access these works and more easily turn them into catalysts for conversations about democratic societies, contentment, and happiness. Those artists chosen to submit artwork for Tinworks galleries are encouraged to work with Tinworks’ curatorial team to prepare their contributions to Tinworks exhibits.

The first location for Tinworks’ season is titled ”Tinworks Art at the Rialto.” This exhibit opens on July 9 at 4 p.m. with a reception open to the public at the Rialto Theatre in downtown Bozeman. The gallery exhibits continue on Fridays, Saturdays, and Sundays from 4 to 7 p.m. through August 14.

The art exhibit at the Rialto is augmented with a special screening on August 1 at 4:30 of the film “Tell Them We Were Here.” This screenplay chronicles artists living and working in the San Francisco Bay Area who follow a path that is less careerist and more community driven. The featured artists in this film extend the legacy of Bay Area activism and social consciousness through their influential but unconventional careers. In an age of hyper capitalism, these artists represent an alternative worldview that emphasizes creativity and community over capital. 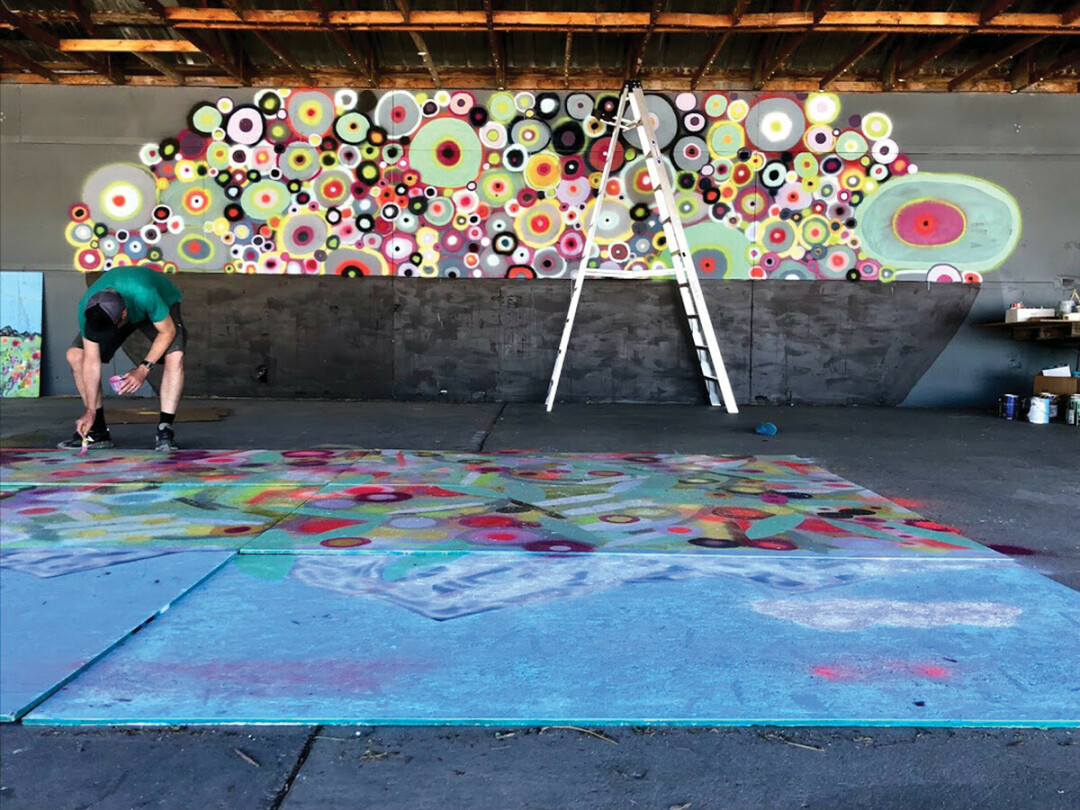 The second site for this summer’s exhibits is titled “Tinworks at Story Mill” and is located at the old Story Mill warehouse just east of the new Story Mill Park. Commonly referred to as “the silos,” or “the silos at Story Mill,” this warehouse once housed the bustling flour mill founded by Bozeman pioneer Nelson Story. At one point, this warehouse supplied 90% of the flour for the entire state of Montana. The Great Northern Railway made a special bargain with Nelson Story to lay railroad tracks up to this mill, leaving rails that are there to this day. History becomes implicit in the very walls and foundations of these galleries, adding depth and meaning to the new works hanging on these old silent walls. This mill closed in 1960, and has been empty since, a large brick-walled, concrete-floored behemoth that once smelled like flour and roared with the sounds of millworks and trains and industry, now echoing only with the distant sounds of traffic on I-90 a couple miles to the south.

Tinworks Arts opens in the Story Mill warehouse space with a reception on July 29 from 5-7 p.m., running through September 5 every Friday, Saturday, and Sunday from 12 to 6 p.m. Special events at the Story Mill exhibit include “The Crossing,” “Strange Mating Calls,” and dance performances by the Raison D’être Dance Project.

“The Crossing” is a two—time Grammy-award-winning professional chamber choir conducted by Donald Nally and dedicated to new music. This group is committed to working with creative teams to make and record new, substantial works that explore and expand ways of writing for, singing in, and listening to choir. This one-hour program will focus on newly commissioned works that address the American condition. “The Crossing” will perform on July 27 starting at 6 pm. For more information about The Crossing, their website is www.crossingchoir.org.

“Strange Mating Calls” is a live performance that reimagines Pier Paolo Pasolini’s 1968 film “Teorema.” The original film centered on an upper-middle class nuclear family in Milan who is visited by a mysterious guest. The guest radically disrupts the family structure only to depart as suddenly as he arrived, leaving the family to confront their own ‘bourgeois’ identities and assumptions. Pasolini’s sparse script—there are only 923 words spoken in the entire film—serves as a neo-Marxist allegory, asking the question: What happens when we are suddenly forced to really look at ourselves, our ideologies, our identities, our place in society, our repressed desires, all at once? This performance is co-produced by Nervous Theatre and Bozeman Actors Theatre.

For more information about the performance of “Strange Mating Calls,” check out the webpages of Nervous Theatre at
www.nervoustheatre.com and Bozeman Actors Theatre at www.bozemanactorstheatre.org.

Raison D’être Dance Project will perform on Saturday August 21, from 4 to 6 p.m. They will offer dances at 4, 4:45 and 5:30 p.m. For more information about Raison D’être, see their website at www.raisondetredance.org. 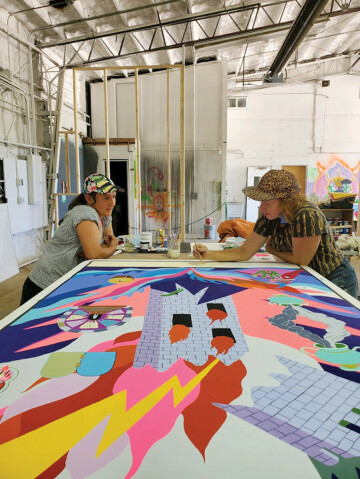 The galleries at the Rialto and Story Mill are curated by Melissa S. Ragain and Eli Ridgeway.

Regain is an Associate Professor of Art History at Montana State University. She is the editor of Jack Burnham’s collected writings, “Dissolve into Comprehension: Writing and Interviews 1964-2004,” and has written for numerous journals, including X-Tra, Art Journal, and American Art. Her new book, “Domesticating the Invisible: Form and Environmental Anxiety in Postwar America,” is forthcoming from University of California Press this year.