Tips and Tricks: Floating on the Madison River

The bustling riverbank located shortly off of Montana Highway 84 buzzed with activity, as scores of tube-floating specialists paddled down the meandering Madison River, maneuvered their tubes to shore, and shared generous bounties of drinks and laughter among their present companions. Technicolor rafts and other assorted flotation devices peppered Black’s Ford—a final landing destination for many miles along the river—in which congregations of outdoor enthusiasts savored euphoric conclusions to their afternoons spent bobbing and dabbling in the water. Ice boxes sat by half-forgotten inner tubes: resting open with propped up lids that invited thirsty friends to quench oppressive heat from the hazy, midday sun overhead. While only a typical day for Black’s Ford in the summer, any vacationers who decide to float on the Madison River often leave with a smile on their face, and fond memories to remember for years to come.

If the idea of floating down a river while sipping on a frosty beverage and stretching out your legs in relaxation grips you with a tantalizing appeal, you’re far from alone. Every summer, innumerable swaths of laid-back residents set their sights on Bozeman’s local waterways to dip in their toes, and cool off from the heat. While some might have their own secretive creek or river stretch to migrate towards, one of the most popular haunts for those in the Gallatin Valley is the six-and-a-half mile float between the Warm Springs Boat Launch, and Black’s Ford Fishing Access Site along the Madison River. And why not? The gentle current ebbs along a winding path filled to the brim with picturesque views of the surrounding bluffs, and its temperate water strikes a perfect balance between being refreshingly crisp and comfortably tolerable. Along the way, one might pass an occasional angler, or another neighborly group floating on by, but the greetings are often jovial, and the atmosphere is one of slow paced contentment and relaxation. 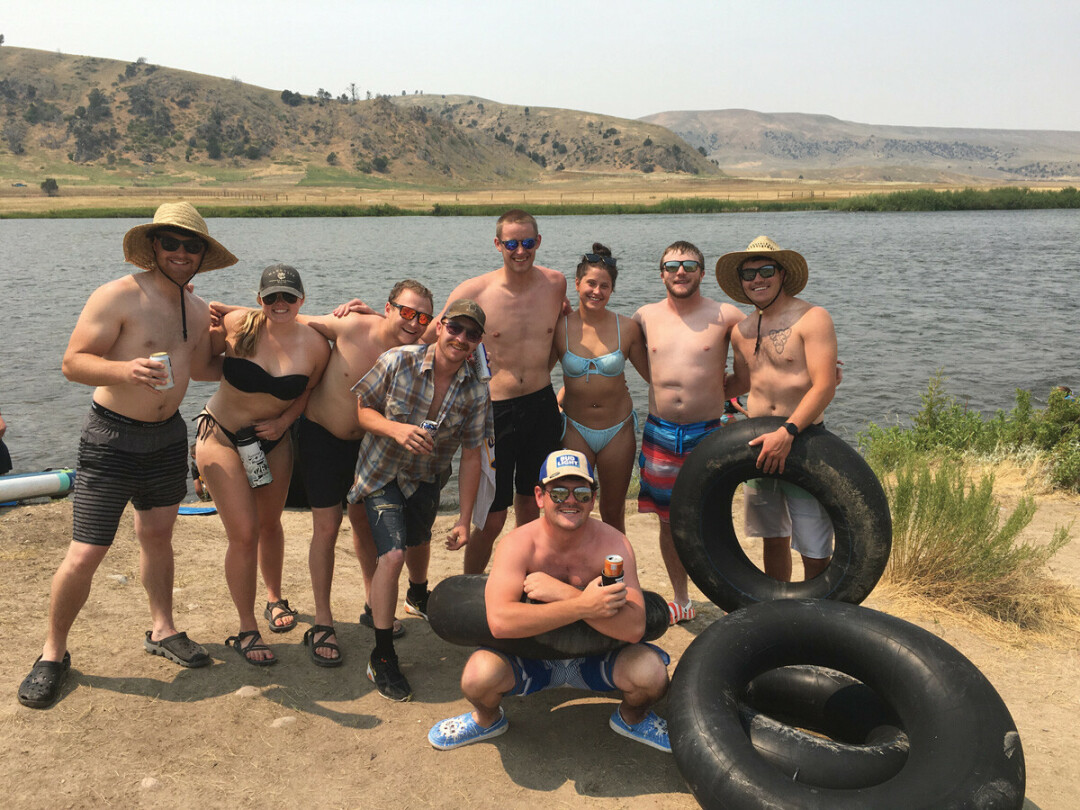 After arriving at Black’s Ford and absorbing its standard, summer cacophony, I encountered a rambunctious group of friends at the tail end of their therapeutic experience: offering sage tips and advice for anyone wishing to craft their own outdoor adventure without painful lessons of forgotten gear, or ill-considered scenarios teaching them how to improve their next trip on the waterway’s lazy bends. I spoke with Tanner Reynolds, a recent university graduate, and he explained a little about his group, as well as what drew them to come together and hang out at the river:

“We’re actually a bunch of college buddies—we got a couple work buddies with us—and we didn’t really have anything going on this weekend so we just came down,” Reynolds stated. He continued, explaining, “Half of the group went to school in Butte, and the other went to Bozeman, and just about everyone here has graduated. They graduated this spring, and kind of wanted to get back together, so we came back and met up.”

The cheerful, elated faces that lay spread across the rest of his company reported a similar story of reconnecting friends, as they jested with one another and milled around the various equipment en route to be organized and packed back into their vehicle. It was clear I had stumbled upon a group of watercourse veterans: most held onto perfectly cooled beverages, buffered in the hand by a drink koozie or insulated water bottle, and every member wore a pair of reflective sunglasses to protect themselves against any harsh or overly bright sunshine. Wide, black inner tubes lay nearby in the surrounding turf and appeared to have been inflated to well-accommodating pressures: not too low, as to leave its occupant struggling to remain afloat, but still retaining enough flexibility to properly saturate the riders in Madison River’s refreshing tides. 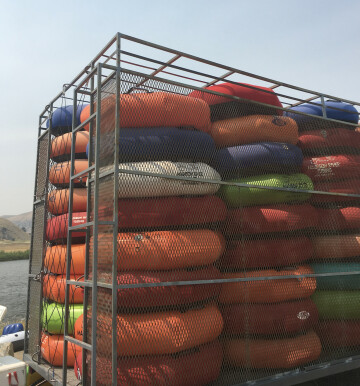 I continued by investigating how the group might have prepared for their fun. There is certainly no shortage of ways to get the most out of an outdoor experience on the water, but depending on the resources one has on hand, common questions can easily arise unprovoked—what supplies do I need? What supplies will make my trip the best it can be? It would be all well and good to simply pack only an inner tube and set off down Bozeman’s surrounding waterways, but doing so would most likely result in the delayed emergence of more than a few discomforts. Because floating recreationalists often find themselves out and about with nothing but time on their hands, aspects such as hydration, skin protection, and even entertainment quickly become important issues to consider.

The merry group freely explained their thought process in preparation for their escapade, and offered perspectives on the gear that they felt might prove useful to take along. Additionally, they mentioned the importance of planning a trip’s logistics as well, such as bringing two vehicles to shuttle equipment back and forth between landings and transport it appropriately.

Reynolds began by recalling how his preparation evolved, stating, “The first time we did it, we rented all of our stuff, and then now we just run to Walmart and grab five dollar tubes, grab a tube for a cooler of beer and essentially that’s it. You grab two vehicles—one down there [at the Warm Springs Boat Launch], and one around here [at Black’s Ford Fishing Access Site]—and drop off.” Continuing, he advised: “If you’re going to do it by yourself, you need tubes of course, and I’m assuming just about every group out here has a cooler. If you have a speaker, that is ten times better: if you don’t have a speaker it’s kind of awkward, you’re just sitting there—I mean enjoying the peace and quiet, but still—a speaker is essential.”

Braden Tethal—another lighthearted member of the troupe—focused on the idea that it is a positive attitude which is most important, and the opportunity to gather friends together and celebrate the time we have with them. He described his group’s river floating experience as a committed and shared interest, and expressed how the group enjoyed spending a sun-filled day together.

“We tied our tubes together, and were all good to go. We had to have a couple tubes for the coolers—for beverages—and then we started floating. And, we shoot for the longest float. We shoot for the stars, dude. If you’re not tipping over in the end, you’re not with us.” Tethal laughed and carried on, stating, “As long as you float how you need to, it’s a blast. It’s a riot. If you do it right, you can do a four hour float with a bunch of great buddies. You want a good crew—you want five good people—because at the end of the day you need two people to drive: you need a pick-up and you need a ride home.”

Though proper preparations and mindsets certainly have their place on the water, the crew also seemed eager to encourage newcomers that floating on the Madison River is an activity that anyone can enjoy. During the summer, besides practicing general water safety, potential hazards on the Madison River seem few and far between. When inquiring about the largest obstacle that was encountered, Hallie Maiseh and Tate Lunde spoke up, providing reassuring answers. Maiseh recalled that the biggest trial they encountered was the pillar of Montana Highway 84’s bridge across the river, a mile or two after departing from the Warm Springs Boat Launch, and Lunde followed up by helpfully encouraging those who might be nervous about navigating such obstacles.

“You see rocks, you see trees, but just ride it out. Let it roll.” Lunde remarked, with a humorous tone beginning to reveal itself. “If you’re gonna hit something, it wasn’t meant to be. You’re not supposed to be out here, alright? Obviously the Madison River did not want you out here.”

With a few supplies and good friends, coming together to enjoy the warm weather and cool water that we are blessed with around Bozeman can be easy, and can include as much customization towards your own preferences as could ever be wanted in an outdoor experience. However—for anyone seeking to enjoy these recreational activities, a few caveats are incredibly important to keep in mind.

Always ensure that if alcoholic beverages are present, there are designated, sober drivers for any vehicles taken along. Drunk driving is both incredibly dangerous and irresponsible, and can be prevented by a few, easy precautions. Talk to a friend or bring along a family member, and prevent tragic consequences by having them safely drive sober, keeping both your group, and the public safe.

Finally, it is incredibly important to enjoy our public lands responsibly, and leave the wilderness as we found it: for everyone else who shares our public lands and does the same. Reynolds and Tethal both emphasized the importance of a “pack it in, pack it out” mentality that their group takes with them when enjoying river floats in the outdoors. They finished their advice by arguing that everyone should practice backcountry etiquette whenever they interact with nature.

“Honestly, don’t litter. Do not litter. We love Montana, we love it for how it is. Don’t do it,” Tethal stated.

Reynolds agreed, answering, “That’s the big thing, I mean it’s a ton of fun and everything like that, but either you have a tube with a net in the bottom designated for garbage, or you have a bag with you, or something like that. That’s one thing we always emphasize when we come, we’re like, ‘Hey, we need to make sure we have a garbage bag.’”

“Yeah, make sure you have trash [bags] with you,” Tethal concluded, “because we don’t appreciate littering, and no one else appreciates littering, so pick up your garbage and have fun at the end of the day.”

If you would like to learn more about the impact of littering on natural environments, please visit www.lnt.org for additional information. Additionally, please visit www.mdt.mt.gov/visionzero/ for resources on preventing drunk driving.