Pianos are usually taken for granted by most of us; they sit in the neglected corners of public rooms gathering dust or against the wall in Grandma’s house serving as a repository of family photos, the ivory keys faded and slow to return. Yet pianos are the entry point to all music for most of us. And we expect them to be in performance-quality anytime we see one and remember some music phrase from our youth. But how do we get and keep these instruments in perfect working order? Piano technicians are the key.

Ward Guthrie of Bozeman has just won a national award for his piano tuning work: a “Hall of Fame” award from the national organization known as the Piano Technicians Guild (PTG). Guthrie has braved the unusual elements of piano tuning around Bozeman and the Greater Yellowstone area for 47 years, including run-ins with wildlife, winter driving conditions, unusual piano locations – including January outdoor piano concerts with Steinway Grand Pianos, and through these years has earned an international reputation of excellence and service towards fellow technicians around the world. The Piano Technicians Guild’s Hall of Fame Award is given out to only 2 people each year who have shared their talents, time and loyalty with the piano technician’s profession and demonstrate significant long-term dedication to the causes, ideals, and purposes of the guild, along with outstanding contributions to and implementation of ideas, programs, and support, resulting in improvement to the piano industry as a whole. Guthrie has proven beyond doubt his credentials in earning this high award.

Guthrie related an “It could only happen here” story to me recently, as an anecdote to what makes tuning pianos special, especially around the Bozeman area: “One of my clients owns a nice 7-foot Schimmel grand piano and lives only about one-half mile beyond the Yellowstone National Park boundaries. When I arrived to tune his piano, other cars were in the driveway, so I parked about 90 feet from the front door. After completing the tuning, I packed my tools, left the house, walked down the front walk heading for my van. About 45 feet from the car, I suddenly saw a huge grizzly bear foraging on apple trees only about 80 feet away! What should I do? I knew if a person runs from a bear, the running can trigger a reflexive ‘chase and kill’ action from the bear, and he’d easily catch me. Knowing this, I forced myself to calmly keep walking to my van. It was amazing how far that last 45 feet was to my van. Just another day in the life of the piano tuner around here.”

Guthrie has been tuning and repairing pianos for 47 years. After getting his Master’s degree from Oberlin Conservatory in Ohio, where he was also trained as a clarinetist, Guthrie returned to Montana and became a public school music teacher for three years in Sunburst, Montana (nine miles south of Canada). His next stop was Bozeman, where he was hired by Creech Reynolds, MSU Music Department chair at the time, to replace an ailing professor. One of Guthrie’s colleagues in the music department, Ed Graff, had a side-job of tuning pianos for the town. They became friends, and Graff taught Guthrie how to take care of pianos as well, and in short order Guthrie had his own sideline business as a piano technician. 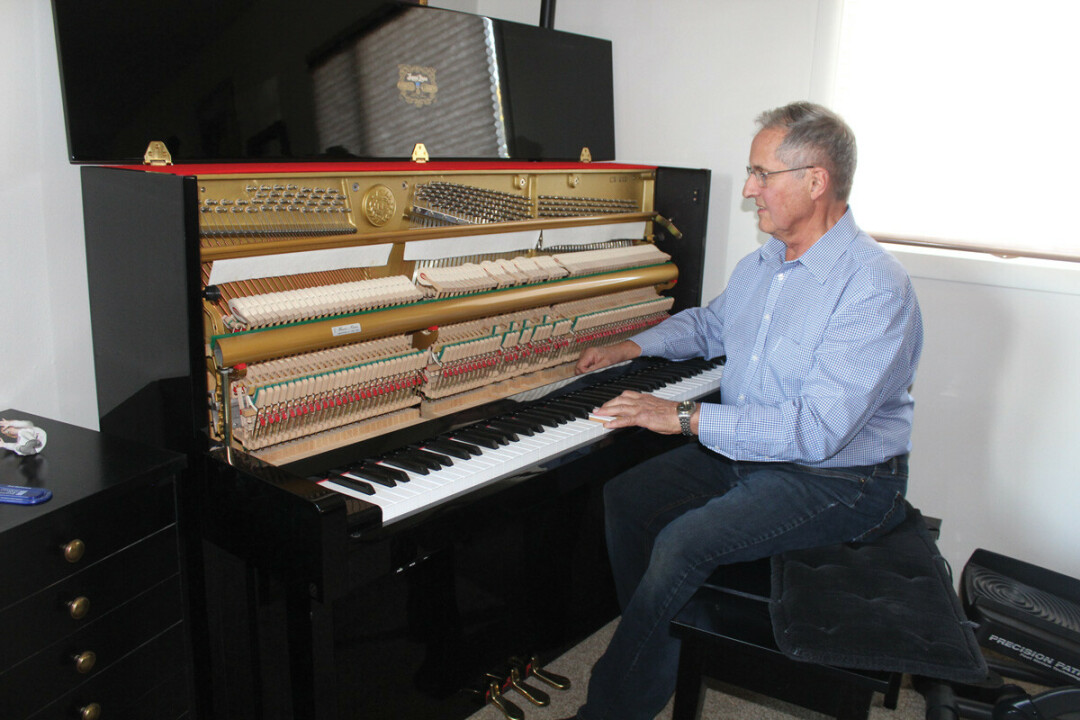 Within a few years, Guthrie had built up so many clients that he had to choose between teaching music or tuning pianos. He chose piano tuning and the Music Department hired Greg Young to replace him; Young is still here at MSU and is also a renowned clarinetist.
A common perception is that piano tuners are great piano players. However, this is not always true; Guthrie confesses to knowing only two songs that he can play on the piano: Chopin’s Prelude in C Minor and Music Box Dancer, by Frank Mills, written in the late 1970s. While tuning pianos does not require piano performance skills, it does help to find enjoyment in tinkering with mechanical parts. There are about 37 moving parts in each key of a grand piano, each moving part playing a significant part in making a perfect sound.

The author Nancy Burkhalter writes about tuning pianos: “To the casual observer, piano tuning must seem mysterious. Customers hear bong bong bong and see us wiggle the tuning hammer. They can’t see that our thoughts are aswirl with myriad judgments about where and how to place the 230 strings [on a piano]. One doesn’t tune just one string and go on to the next. We first set the A above Middle C to the A-440 Hz tuning fork, which is the standard frequency throughout most of the world for that note. From there, it’s a process of repeatedly comparing unisons, intervals, and octaves. We do that by counting beats, or pulses, created by two sound waves crossing. And, yes, it takes a long time to learn to hear them.”

The PTG, headquartered in Kansas City, Kansas, is the world’s premier source of expertise in piano service and technology, representing more than 100 years of collective knowledge, with over 3,300 members as well as the piano tuning industry’s only recognized piano service certification program. Burkhalter’s comments are a point of reference to the training that PTG provides technicians that enables them to hear the beats, pulses and sound waves that create the perfect sound to our ears. The PTG was formally organized in 1958 after the merger of several smaller piano technician organizations merged. One of the big organizing principles behind the need for an organization devoted to piano tuning was the need for a standard tuning pitch. Today almost all pianos are tuned to the A-400hz pitch, that is, the A above middle C vibrates at 440 cycles per second, most commonly known as “concert pitch.” This guarantees that all instruments will be in tune with each other, standardizing the pitches across towns, states, and international borders. Imagine playing in a symphony in which everyone tuned their own instruments to whatever sounded right to their own ear!

The starting place for tuning any piano is always A-440, as Burkhalter references above. Pianos were invented around 1700; creating A-440 as the standard tuning pitch for pianos didn’t occur until 1938; until then pianos tended to be tuned only to regional and local desires. The obvious question is “why choose A-440 as THE correct pitch”? The answer is fascinating, and it has to do with steam and the introduction of steam used to power trains.

In the 19th century, train engines and steamships were developed that were powered by steam engines which created railroads and steamships that quickly led to much increased travel. Soon musicians were frequently traveling from town to town and across national borders to perform, often as guest artists with local symphonies. The traveling guest star needed to find a way to sing and play in tune with the local orchestras. With the pitches varying greatly from community to community, it was important to find some continuity between communities.

Around 1830, an amateur scientist in Germany built a collection of graduated tuning forks which could be used to measure various pitches. Traveling around Europe, he measured the exact pitch used in various cities, finding great variations from place to place. In a meeting of the German Society of Naturalists and Doctors in 1834 in Stuttgart, Germany, this scientist proposed A-440 as a median compromise for everyone to use as a standardized tuning pitch. Very slowly this compromise became accepted, but regional differences still held, especially in England and France.

In 1936, the A-440 frequency became a standard of sorts across the United States when the U.S. Bureau of Standards chose to broadcast the time and frequency of an hourly A-440 tone so musicians in radio stations across the country could tune their instruments to a standard pitch. In 1938, in one of the last pan-European agreements before World War 2 began, A-440 was adopted by all European nations to align with the United States.

The mission of PTG is to promote the industry’s highest possible standards by providing members with every opportunity for professional development, recognizing and promoting technical competence through examinations and advancing the interests of each of our members. PTG also offers seminars and training sessions, including some that address nostalgic feelings about pianos, entitled, “But It’s My Grandmother’s Piano!” and giving advice to technicians who commonly encounter those situations when someone inherits a piano that has deep sentimental value but has not been maintained through the years.

There is so much demand for piano tuners in the United States, with a ratio of approximately 6,000 pianos for each tuner. One piano tuner working full time can only tune approximately 600-800 pianos per year. General accepted wisdom says a piano should be tuned minimally twice a year to keep it in good condition. Concert pianos should be tuned daily. To someone like Guthrie with his trained ears, a piano could be tuned twice a day. Clearly, there is a need for more people to make a career out of becoming a piano technician. If you would like more information about the Piano Technician Guild, or about becoming a piano technician yourself, please contact the Piano Technicians Guild for more information. They can be reached at 4444 Forest Avenue, Kansas City, Kansas 66106. Their phone number is 913-432-9975 and their email is: ptg@ptg.org.

“Life is like a piano. What you get out of it depends on how you play it.” – Tom Lehrer