Knowing When To Turn Back

Most of the time when people are told not to do something, they do it anyway. It’s just human nature to put up a challenge and go against the rules. As humans, we don’t truly learn unless we experience the consequences ourselves. If we continue to get lucky, then we’ll keep risking our lives. We thrive on risk. It might be just me, but doing something that involves risk makes me feel alive and good. No matter how much I’m told not to do something because of how dangerous it may be, I’ll usually do it anyway, because I want to feel the adrenaline.

My roommate, Grace, and I decided to go to Clayton, Idaho for Halloween weekend. We found this beautiful hike called Goat Lake, located in the Sawtooth National Forest. This was a very last-minute trip, so we didn’t really look into where we were going. We just knew we wanted to get out and do something. So we threw our backpacks, food, water, sleeping bags, and pillows in the car and took off! We probably should have checked the weather before leaving, but it was too late, because there was no cell service during most of the roughly six-and-a-half hour drive from Bozeman to Iron Creek Trailhead, the access to Goat Lake. The drive is beautiful, but we didn’t realize that until the end of the weekend, because most of our road trip was in the dark. It was also very rainy, so it was fun, but kinda scary. By the time we made it to the trailhead parking lot, it was around 11:30 pm. As college students, we’re not made of money, so we decided we’d just sleep in my car all weekend. Honestly, it wasn’t bad, but it did get a bit cold at night.

Saturday morning we woke up and made some dehydrated eggs and oatmeal to get the day started. We were the only ones in the parking lot that morning. It was very peaceful, and a nice getaway from society. After breakfast, we set out on the trail, not quite knowing what we were getting into. We didn’t even know how many miles we’d be hiking, because it didn’t say on the trailhead sign. Luckily, we saw some other hikers, which allowed us to at least walk in the right direction. It was very foggy when the hike began, but I was hopeful it might clear up. It didn’t. In fact, the further into the hike we got, the more cloudy it became. We were both pretty discouraged by the fog, but we found a way to enjoy the trip for what it was. The first obstacle we encountered on the trail was a stream. Grace was completely prepared. She had her hiking poles, as well as some Chacos, in case we ran into a stream. On the other hand, I was not at all prepared. I had my hiking boots and backpack, and that was it. So, when we were crossing the stream, we had to improvise. My roommate could easily have gone on without me, but luckily she didn’t. Instead, we each took a pole and shimmied our way across this log that was acting as a bridge. Since it was foggy, there was some condensation that created a slickness on the log, but eventually we made it across. So, lesson number one: Always prepare for a hike. Even if you don’t think you’ll need something, you probably will—especially during a hike in late October with the possibility of snow on the ground! 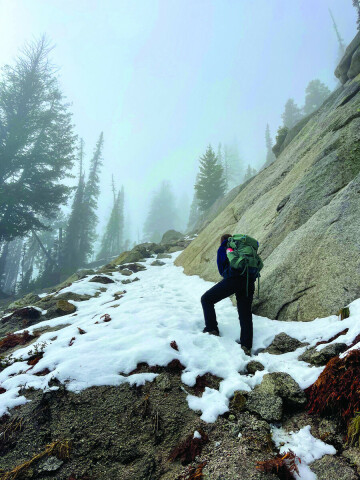 After the stream crossing, the trail was pretty solid for two miles or so. It did get pretty snowy and steep. We ran into our first big hill, which had lots of switchbacks, but fortunately the snow wasn’t terrible. Our summer hiking shoes provided enough traction to get by. As we got to the top of those switchbacks, the snow began getting deeper. I thought to myself, “maybe I should have some sort of stick for stability.” I found a stick with the perfect height along the trail and it ended up being pretty useful since I’d forgotten my poles. At this point, not only did the snow get deeper, but service continued to be non-existent. Grace and I weren’t worried, though. We had faith it would work out, so we kept trekking along the path. We came across a sign with an arrow pointing down to the left; to the right, the sign pointed towards nothing. So we headed left. Then I decided to check my phone… I had service! Goat Lake was in the opposite direction. We also figured out how long the hike was. It was an 8.1-mile trail overall, so we only had about two miles to go to get to the lake! Lesson number two: Download the AllTrails app, because it tells you distances, and works as a compass. It will point you in the direction you need to go. If you are hiking somewhere and you’re lost without access to the AllTrails app, use Google Maps. Although you can’t type in a destination, you can see where you are, and find lakes around you; it is very useful.

Once we turned around and were heading in the right direction, we felt very reassured. At this point, we were in a very open area, but it was still super foggy. Looking out at the terrain around us was like being trapped inside a cloud. Grace and I kept making jokes, saying things like; “Hey, imagine how pretty the mountains probably are!” Our next big obstacle was the last 1-1.5 miles of the hike. Since it was late October and the trail is typically not used after September, it was not very trekked out. There were some footprints already there, but for the most part it was pretty ghosted out. We came to a part of the trail where it showed a weird zig-zag we needed to follow. This meant going up the steep, snowy, icy mountain to the right of us. With both of our personalities being hard-headed and go-getting, we decided to say, “eff it” and continue hiking. At first, the steep hill wasn’t terrible, but the further we got, the riskier it became. Not to mention, our hiking shoes were not made for snow this deep, so the insides of our boots were turning into a swamp. We were only a mile from reaching Goat Lake, so there was no way we were turning back, although we were starting to worry for our safety. Each step forward seemed to get more slippery than the one before. I would take a step, and then my foot would slide right back to where it began—not good. Plus, Grace was the smart one with poles. I, on the other hand, only had that stick. It got the job done for a while, but it was not doing too well as the terrain became steeper. I remember stopping at one point and asking whether we should turn around and go back. We thought about it for a second, but ended up going further because we could still see some slight footprints from others. We figured, ‘If they can do it, we can do it.’ We got about 15 feet further; then, the footprints disappeared completely. This is when we got that bad gut feeling. You know the feeling—like something just isn’t right. We stopped and finally stepped down from our pride, putting our safety first. We really wanted to keep going, but we knew that going up a steep hill covered in deep snow would not work in our favor. Yeah, it was a bummer, I admit, but you have to listen to that gut feeling and know when to turn back. So, lesson three: Wear good hiking shoes that can handle the snowy mountains; don’t hike to an alpine lake in October and, most importantly, don’t let your hard head lead you into dumb decisions. It’s not worth the consequence. 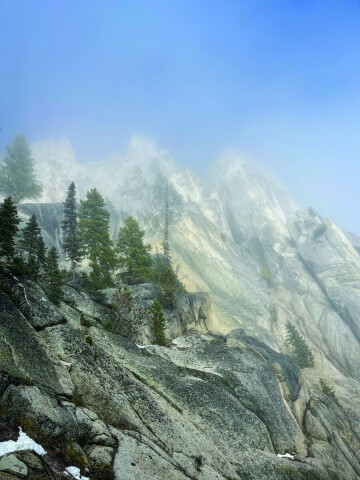 The way down was SUPER fun!!! The overall elevation of the hike was 1,768 feet, and being one mile away from Goat Lake meant we were pretty close to that. With that being said, it was very steep and there wasn’t a very safe way down. Prior to the risky descent, living in the moment, we just had to build a snowman… because after all that hard work of climbing, we deserved to make our mark! Anyway, we ended up deciding that the safest way down was going to be sliding. Maybe not the best way to stay dry, but it worked. Lesson four: Make sure that if you’re doing any sort of hike in the snow you have good, waterproof clothes. Trust me, you’ll thank yourself later.

Maisie Bissell is a freshman at MSU majoring in writing and photography, who really enjoys the ability to share her work. She just recently moved to Bozeman from Washington and absolutely loves it here.