When you first set foot inside Mountains Walking Brewery—greeted by its elegantly sprawling bar, long wooden tables, and an ambiance full of relaxed conversations, you quickly realize that you’ve stumbled across one of Bozeman’s hidden treasures. The relaxed dialogues surrounding you blend seamlessly into soft music that drifts down from the brewery’s wood-stained accents, and a welcoming embrace of camaraderie is almost palpable among the natural light, friendly faces, and steaming plates. It isn’t surprising that Mountains Walking Brewery continues to please its patrons with dozens of original beer and seltzer varieties, and food made from scratch: the owners have worked hard to create menus that tantalize the appetite, and to craft intimate environments that build positive, lasting relationships with its customers.

Following their dream, Gustav Dose and Sarah MacDonald moved to Bozeman seven years ago to start their business as Mountains Walking Brewery. With a focus on finding harmony within fluidity and impermanence, they pursue community development in Bozeman through their craft: sharing passions for well-refined food and beverages with anyone who’s interested. We spoke with them both to understand what inspires them to continue developing Mountains Walking Brewery into a pillar of Bozeman’s brewing scene.

Gustav Dose: I guess it depends on if you’re tying it into how our tasting room was engineered to be; maybe I’ll start there I guess. You know, I’ve been in the industry a little bit: probably 15 to 20 years now. Obviously, you see a lot of breweries and tasting rooms: and a lot of them are kind of cavernous, and open, large spaces—you hear a lot of echoing. I kind of wanted to go the other way and make it intimate and smaller, and engineer it so that you don’t get that echo; where you can still have music, you can still have the conversations and that booth kind of thing going on, but still incorporate that cavernous, community table kind of thing—like beer bringing people together—that’s what we’re all about here. 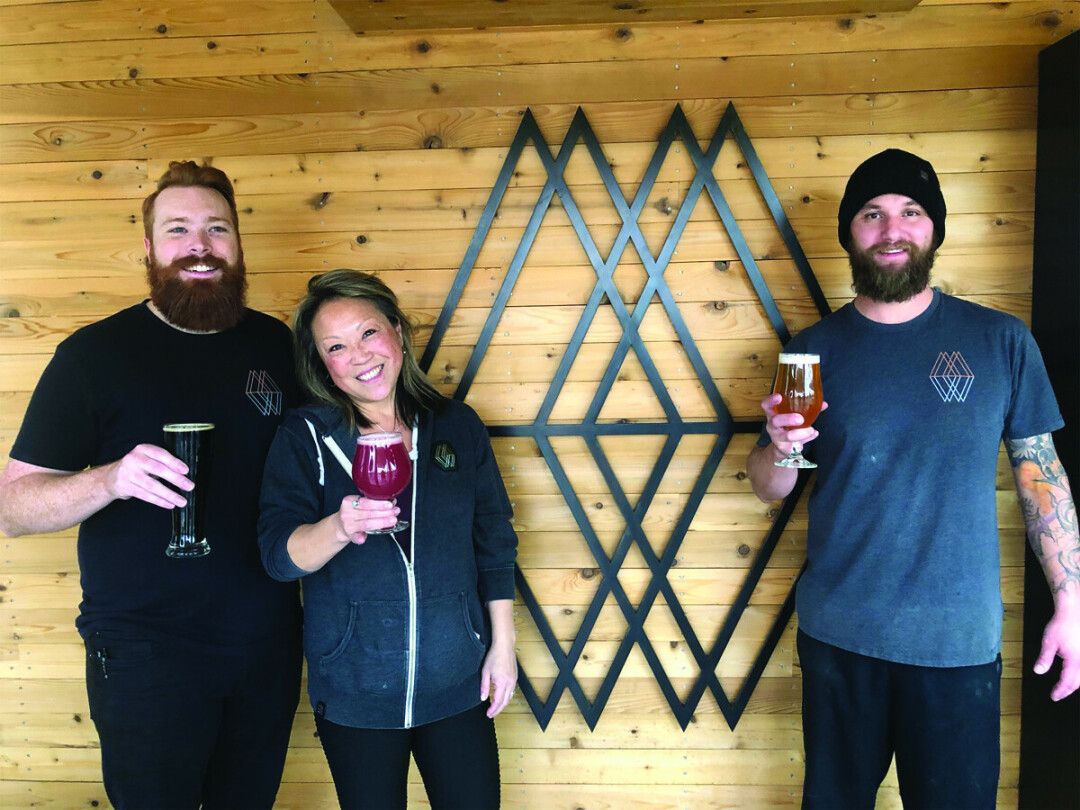 CDM: How did you develop an environment that was both open, as well as intimate?

GD: I guess just creating space so you don’t have sound coming up and around. [The brewery’s tasting room] was engineered as a box within a box. This is a big warehouse, so this taste room is just kind of a little wooden box that’s hyper-engineered with sound dampening and speakers and stuff like that; I come from an asian background and I really want to incorporate linear lines too so you create that kind of a flow of horizontal space and vertical blinds.

Soon after, I was joined in conversation with Gustav Dose’s spouse, Sarah MacDonald.

CDM: So when thinking about the birth of Mountains Walking Brewery, what dream started that? What made you want to open a brewery?

GD: It really started from a love of beer, and then it got into just learning more and more about it over the years working at breweries. Mountains Walking comes from my background and my philosophy of life—and the impermanence part of it is having worked at breweries that do a great job of producing two or three varieties of beer, but just kind of plug away at it. I wanted to do the opposite; I wanted to create a place where breweries are testing the boundaries—if there are boundaries—and bringing new things, even if it’s off the beaten path a little bit.

I really wanted to do different things and have a place where brewers really feel challenged and want to come to work every day, and that’s extended out to [the brewery’s restaurant] too. Part of my idea of [building] an open kitchen is that I’ve been in kitchens and in the back: there’s a divide between the kitchen and the front—I really wanted the kitchen staff to be front and center too. You can have people seated, and have that engagement. You know, you see everyone here and that’s important to me. I wanted to create that kind of an environment.

CDM: What do you want people to experience when they walk through your doors?

GD: Well, we humbly create our products to engage with the customers. I really want that engagement with them through our service, through everything. Everyone is important in delivering this product, and if it comes in a crappy, smeared glass, or if the person serving it to you just seems out of it, that ruins the beer just as much as a recipe or just as much as any other part of the process. I think that other breweries I’ve been with and worked with [have] sometimes been like, “Oh the beer is so good, people will come.” Well, no. I mean it really has to be good all the way up into the end. 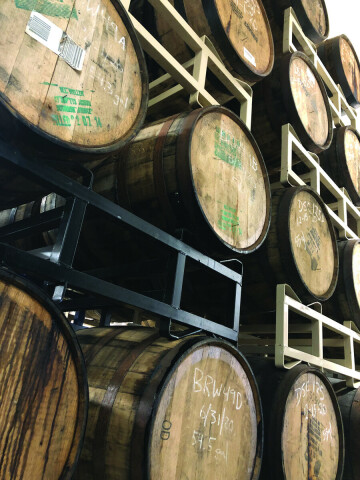 GD: I think brewery-wise, we’re a little bit different from the other breweries in the state. I think that no one else has thirty beers [and seltzers] all made in-house.

SM: So we have Bozeman’s largest brewery tap list in addition to everything, and all the taps are completely full right now. We have even more cans—we usually have about thirty-three, or thirty-four different options. Plus, we have hard beers/hard seltzers.

CDM: That’s a lot of variety.

GD: We really keep pushing it too, so if you come back in a month we’ll have seven or eight different things you haven’t tried. And also, I think from the beginning we focused on being the best restaurant we could be, and we didn’t put that secondary, we put that front-and-center, and it’s been a huge learning experience. I can’t really speak to others, but I think that if you go to other breweries, it’s not necessarily like that. So, I think our food is right on par with our beer, and it hasn’t been like, “Oh yeah, we’re a brewery (and we have some food).” No, our food is really good and our beer is really good too.

SM: We also have Bozeman Bubble hard seltzer as well.

CDM: What do your regulars keep coming back for?

GD: I think it’s the food, the beer, the atmosphere, and I think a lot of it is the people too. People like people, and they like to feel welcome and comfortable. I know we have regulars that know our servers, know Sarah, or know myself, and I say hi: that sense of community makes it all worth it, you know? I think it’s—again—the whole picture, but [also] about the people.

CDM: What is your personal favorite menu item?

GD: Straight up, the pizza. I think our pizza’s really special, I mean I think we’re one of the only places that [cooks with] one hundred percent wood fires. Everyone comes out a little different; sometimes they’re a little burned you know—it depends on the fire temp. I think it’s really special and [our] extra 48 hour fermentation on the dough allows for what we’re talking about with the beer—the breakdown. There are so many similarities between bread and beer too, because it is a product of that breaking down of the grain, and yeast is involved.

SM: It’s nice because when you eat it, it’s not so heavy—in my opinion anyways. It just feels a lot lighter when I eat the pizzas here compared to other pizzas; I love the pizzas. 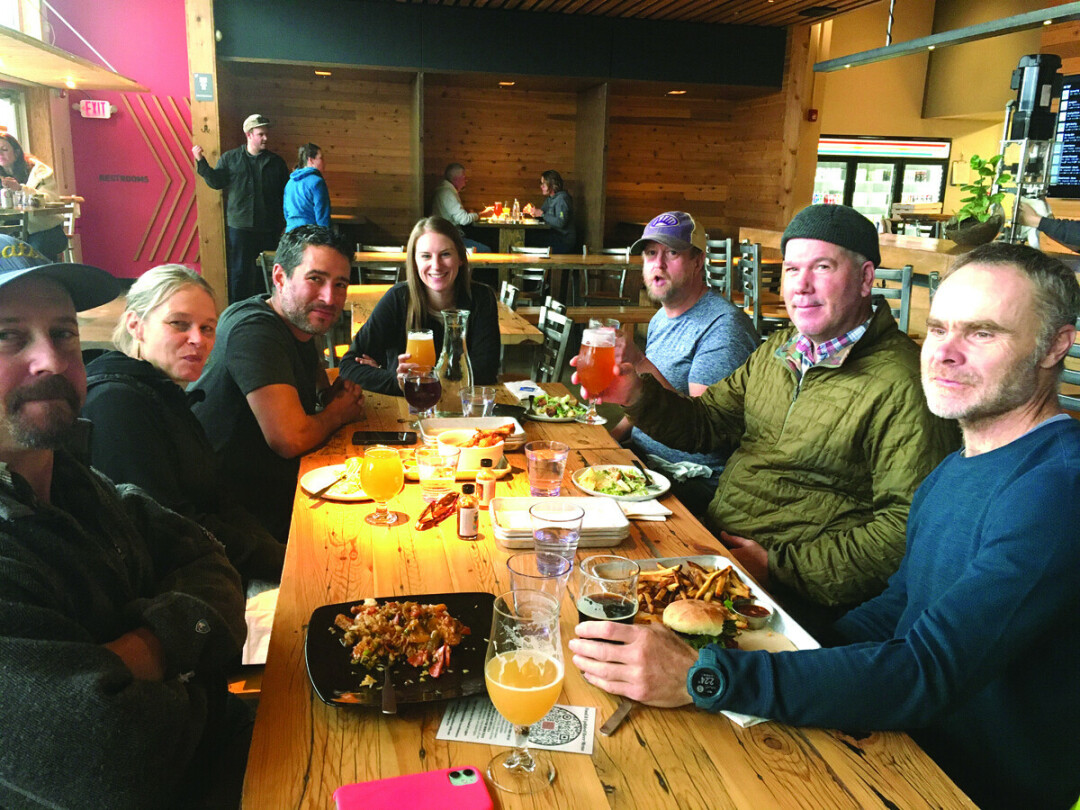 CDM: Do you have anything coming up that the readers should know about?

SM: We’ll be open in December every day except for Christmas, so we’ll be open Christmas Eve and New Years Eve. And then, every Tuesday we have a special—Taco Tuesday—you get two tacos and a five dollar beer for ten dollars. Every Wednesday, we have a Wing Wednesday special…then, we’ll have a pint night for Haven in December too…and that’ll be [a donation to them of] 10% from all draft beer sales of Mountains Walking’s brand new “Hokkaido” [selection] in Bozeman Bubble draft beer and hard seltzers [from 4 pm to close].

Before departing, Sarah was kind enough to provide a brief tour around their warehouse: with heartwarming photo opportunities of their tightly knit staff, a group of friendly, regular customers who had worked with them as architects to design and build their business, and even the impressive, stainless steel equipment they use to craft their artisan beverages.

Whether you’re after a relaxed environment to enjoy engaging conversations whilst sipping on draft beer, an eatery to dazzle your taste buds with pizza and other food made from scratch, or just a welcoming and friendly environment, you would be hard pressed to find a better Bozemanite gem than Mountains Walking Brewery.