‘Til Death Do Us Part: Stories of Romance in the Gallatin County 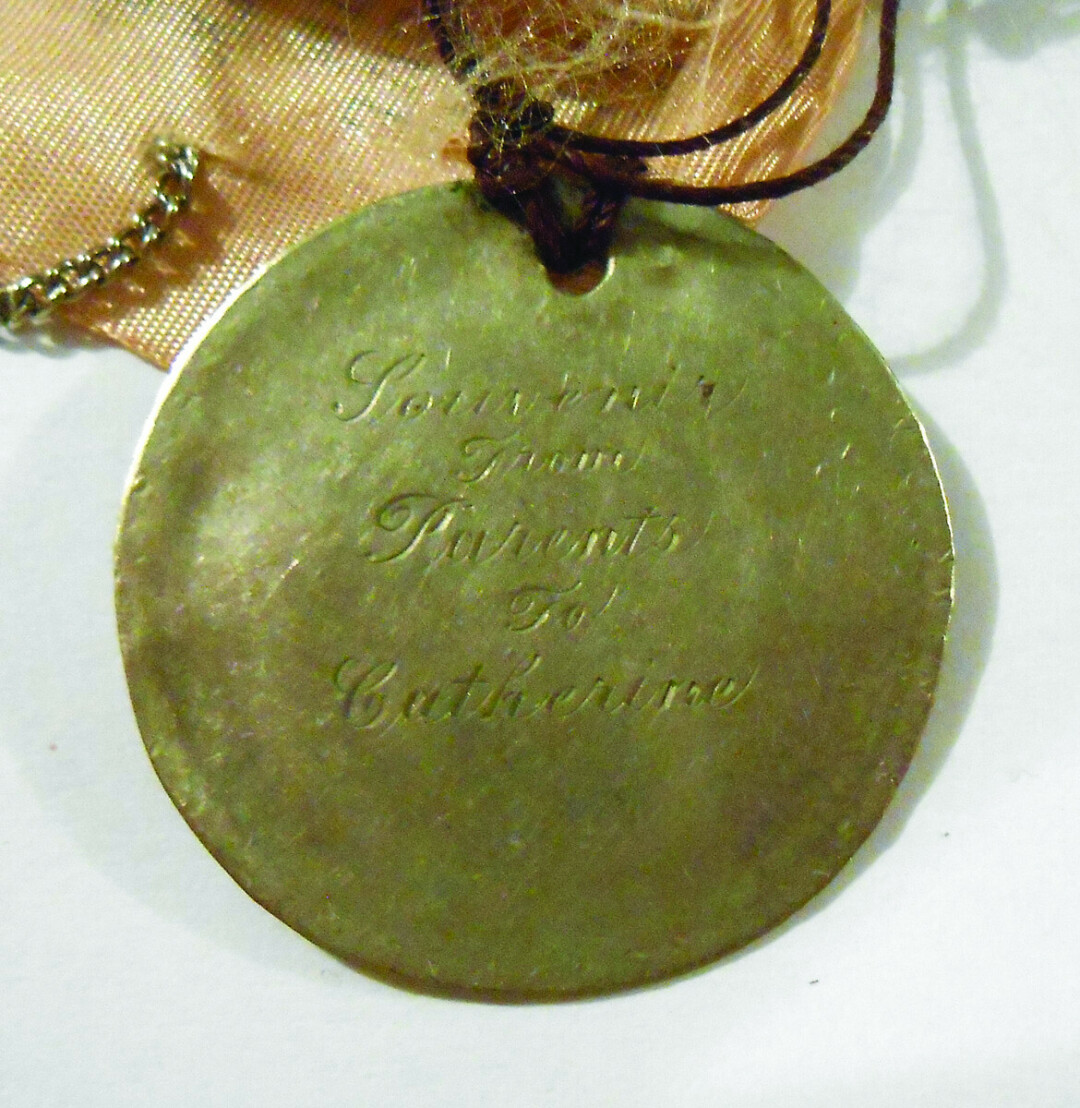 Housed in the collection of the Gallatin History Museum is a box full of ornate vintage Valentine’s Day cards, many of them collected and donated by Mrs. Myrtle Hollier Cheever to the museum in the early days of its existence in 1986. This collection contains over 100 cards, most of them boasting lace, ribbons, flowers, and hearts. Perhaps most unique, one features a giant red lobster and the words: “A Lobster I am and always will be. But won’t you have pity and please marry me?” This collection was mainly gathered by Cheever’s mother, and resided in the attic of her home until discovered by her daughter.

Then there are the sweet home photos of George Orswell and Anna Huffman Orswell depicting the happy couple in their domestic life. From playing the piano, to scenes of daily activity, these photos playfully show the joys of young love. A vinyl record recorded at the Ellen Theatre also resides at the museum. The album, “On the Wings of Love” was performed by Ed Pegram on the Ellen’s famous Wurlitzer Organ. 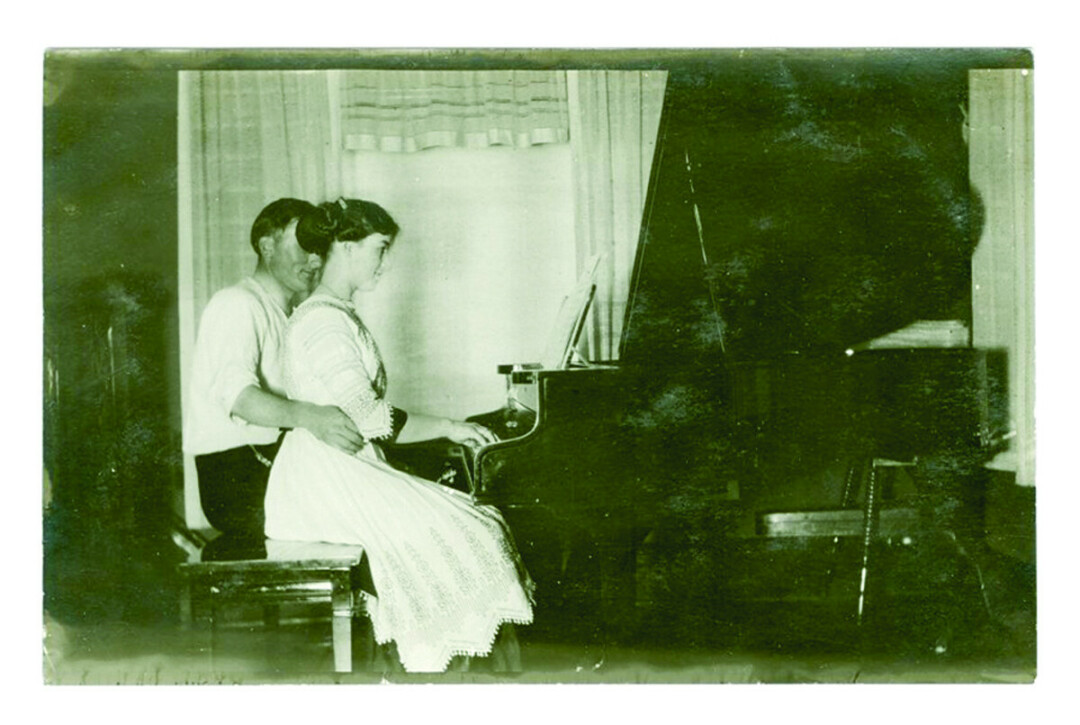 While the museum is home to many a vintage wedding dress, there are some recent donations of note, including that of David Delap Sr., which is a wedding suit. David and Ada (Walton) DeLap were married on February 6th, 1929, at the First Methodist Church in Bozeman. As David was then a member of the National Guard, fifty officers and enlisted men attended the chilly wedding (the temperature had been 29 degrees below zero)! Decades later, David DeLap Jr. discovered his mother’s original wedding bouquet in a cardboard box in the attic. The bouquet is currently on display at the museum.

Also among the recent donations is a green wedding dress with cream and gold detailing on the sleeves, worn by Hazel Evah Stiles in 1933 when she married Leslie O. Anderson. As with many dresses during the Great Depression, the color of the dress could indicate its multiple uses. A green dress could be worn again, unlike a full gown of white. The museum’s collection also contains some pieces of wedding lingerie, made of silk and lace. A particularly interesting quilt was made in 1890 by Sarah Jane Johnston Reichman using wedding dresses and men’s neckties. The light-colored fabrics are the dresses, the dark fabrics the neckties.

Other artifacts hearkening to matrimony are a gilded metal centerpiece with three cupids encircling a ruffled pink glass bowl that was given as a wedding present; a six-sided white dinner plate with a gold band that was one of twelve originally used at the wedding breakfast of Carey A. Darlington and Eliza Holmes Darlinton in 1828 before it was packed up and brought to Montana across the plains in a wagon train, and many a wedding announcement, scrapbook and certificate. A Roger’s and Bros. silver set that includes candelabras, serving ware, and punch bowls was used from the 1950s through the 1970s at the Baxter Hotel for events including dances and weddings.

Then there are artifacts that show the love between platonic friends, as in the five-piece silver decanter which is inscribed, “Presented to Lizzie Woods by Blanche and Maude, Oct. 28, 1889.” Lizzie Woods was a Madame and Blanche and Maude were her “girls.” Their admiration of Lizzie can clearly be seen in the decadent engraving upon their gift. Friendship is again showcased on the “Friendship Quilt” made by workers at the Pea Cannery; their names are embroidered on each square.

There are heartbreaking artifacts of love taken away too soon, as in a watch back carried by a soldier all throughout World War I. It had been given him by Judy Catherine Swartz, whom he was to marry. While he was in the War, Judy sadly passed away back home. The watch back has inscribed upon it “Souvenir from Parents to Catherine.” Its chipped and dented edge displays his devotion of carrying it throughout the war.

The collection also holds some mementos of love gone awry, as in the long kitchen knife that Mrs. Knowles used to stab her husband in the chest in 1966. The man survived, and charges of domestic violence went unprosecuted when the man claimed to have only fallen upon the knife, and the wife stopped speaking. 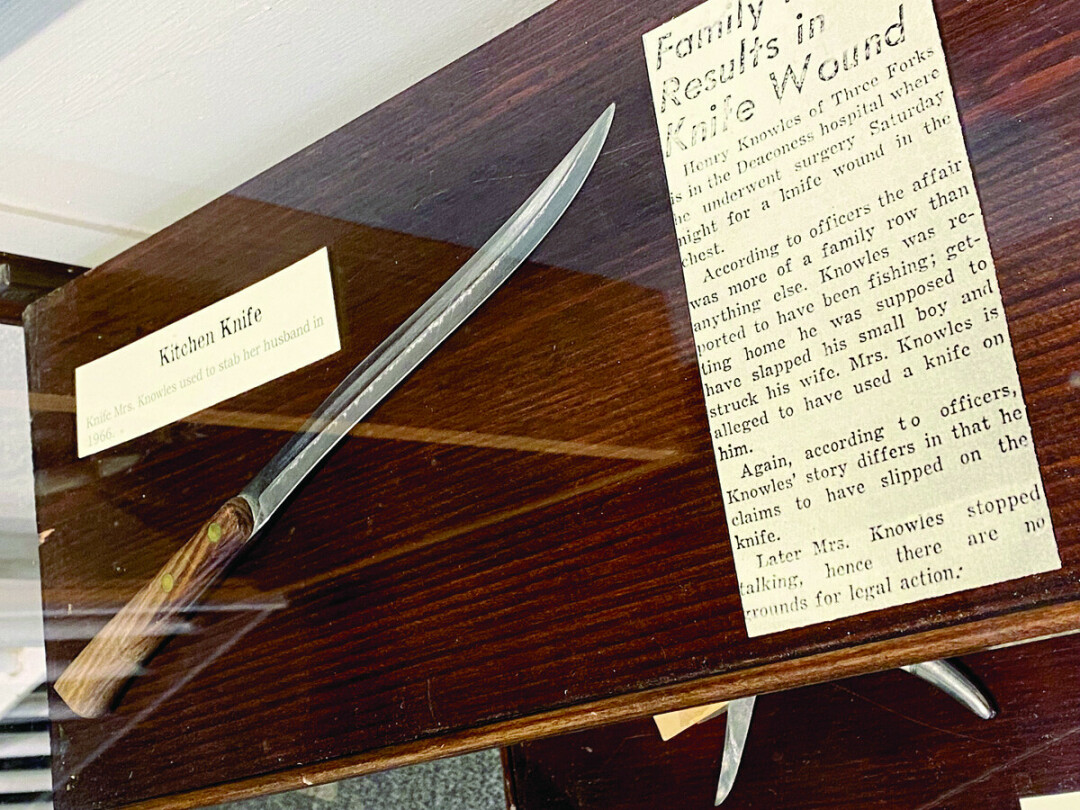 In 1900, a triple tragedy occurred at the Rock Creek Church in the Shields River when Frank Forrest murdered his former sweetheart, Flora Lin and her new suitor, Willis Howard, before killing himself. It seems that Howard had been a poor winner, rubbing it in to Forrest, who finally cracked. The local paper summed up what may be a classic line for many a story of love and murder: “Thus ends the story…and it’s tragedy. Each man had his friends, each has his defenders. Possibly one may have been too jealous, too revengeful; possibly the other was too hasty. But that they both loved, and loved to desperation and death cannot be denied, and, whether friend or foe, the verdict of all is recorded in one brief sentence, “It’s too bad.”

This would not be the only case that ended sadly. In 1915, Walter Anderson shot his wife through the window of her bedroom after seeing her with another man in that location. He would be sent to Deer Lodge State Prison for ten years, guilty of manslaughter only when his sanity was found potentially lacking. And in 1900, Etta Davis would be murdered by her scorned lover, Frank Rogers when left alone in his company. At first sight, Etta’s husband believed the couple to be sleeping on the floor of his kitchen and himself considered murdering the two of them with an axe. Instead, he would set out to put his affairs in order before he planned to take his wife and children and leave town. It would be hours before the poor man would discover the couple was indeed dead, not asleep as he had believed. Etta had remained faithful to the end.

While there are many more cases of this sort, let us remain hopeful that love leads to happily ever after; ‘til a natural death do us part.