Edith Freeman and the Art of Woodblock Printing

Early in my work at the Gallatin History Museum, I stumbled upon a print in our basement amongst many other paper works. This one stood out to me, because I too am a printmaker. I had never seen anything quite like it; the colors were exquisite—and the texture! You must see it in person to appreciate the texture that gives one layer of ink depth from another. I knew it was special, and I knew I had to know more about it. Everyone I showed it to fell in love with it as well.

The print is titled, numbered, and signed “Flowerbed: Woodcut” 15-20, E. Freeman. A Google search told me the print had been made by Edith Maxwell Freeman, who had been born on my own birthday, May 1st, 1913, near Broadview, Montana, and that she had died in December, 1922 in Billings, Montana. Her story was absolutely inspiring, especially to me as a hopeful young artist. Edith had received a Bachelor of Arts from Eastern Montana College (now MSU-Billings) in 1954, and a Master of Science in 1961. Having been a painter, she did not explore woodcut techniques until the 1960s, when she attended a class taught by Isabelle Johnson. In many ways, this followed my own trajectory. I had received a Bachelor of Fine Arts from Western Oregon University, only dabbling in printmaking in my fifth year. Having been somewhat forced into it, I discovered I absolutely loved the process.

Edith became enamored with woodblock printing in the last three decades of her life, showing you’re never too old to learn something new! Her favorite subjects were the landscapes in which she lived in Eastern Montana. From her backyard garden to images of the prairie, her work is instantly recognizable. 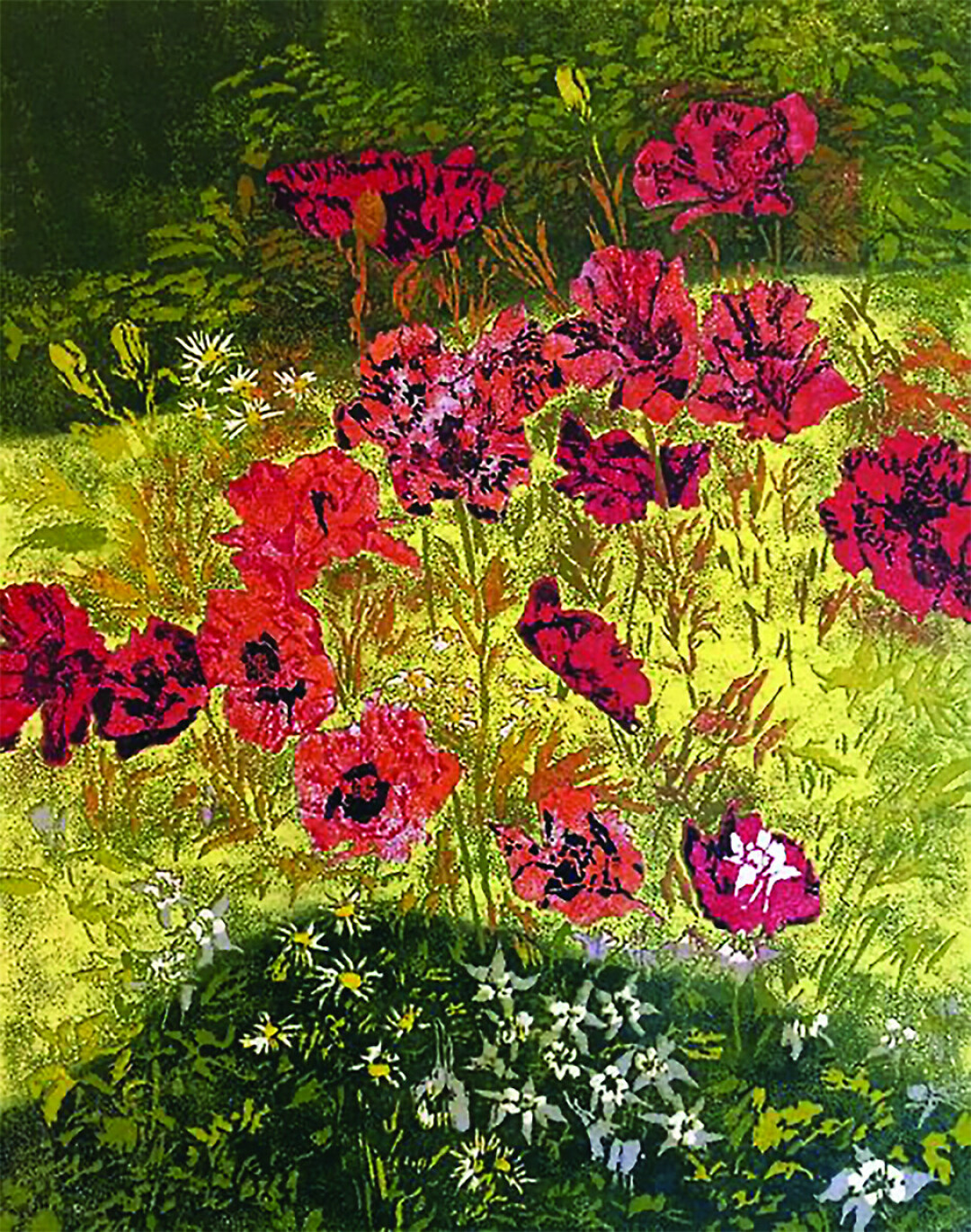 Woodblock printing seems to have originated in China as far back as 868 C.E. The technique is difficult to master. First, you must think of the image in a backwards fashion, particularly if you are printing a reduction print, as Edith most often did. This requires only one woodblock, which is carved and printed, carved, and printed over and over again until the desired layers are achieved. In this way, the details are brought out from the distance to the foreground, from the vague outlines of color to the rich, small flecks of color that give the piece depth. The negative space becomes central in understanding which areas need to be carved away.

Carving requires relatively simple tools; a supply of various ‘carvers,’ from wide, dished-out blades for removing large areas of wood to small, V-shaped blades to create the details. Wood is trickier than linoleum, since you must either work with or against the grain, depending on the design. The grain can make a cut unpredictably veer off course if you aren’t careful. Hence, the constant reminder from teachers of the trade to “cut away from yourself.” For Edith, this process became more difficult with age, as she struggled with arthritis in her later years. This malady did nothing to stop her, however; she found a remedy to keep her carving hands steady—tying doorknobs to her wrists! As noted by Meadowlark Gallery co-owner Marylee Moreland, who once visited Edith at her studio; “she reminded me of Julia Child—a very proper lady, but down to earth.” Edith was always known to those around her as a woman who let nothing stand in the way of her good attitude and great drive to learn new things. 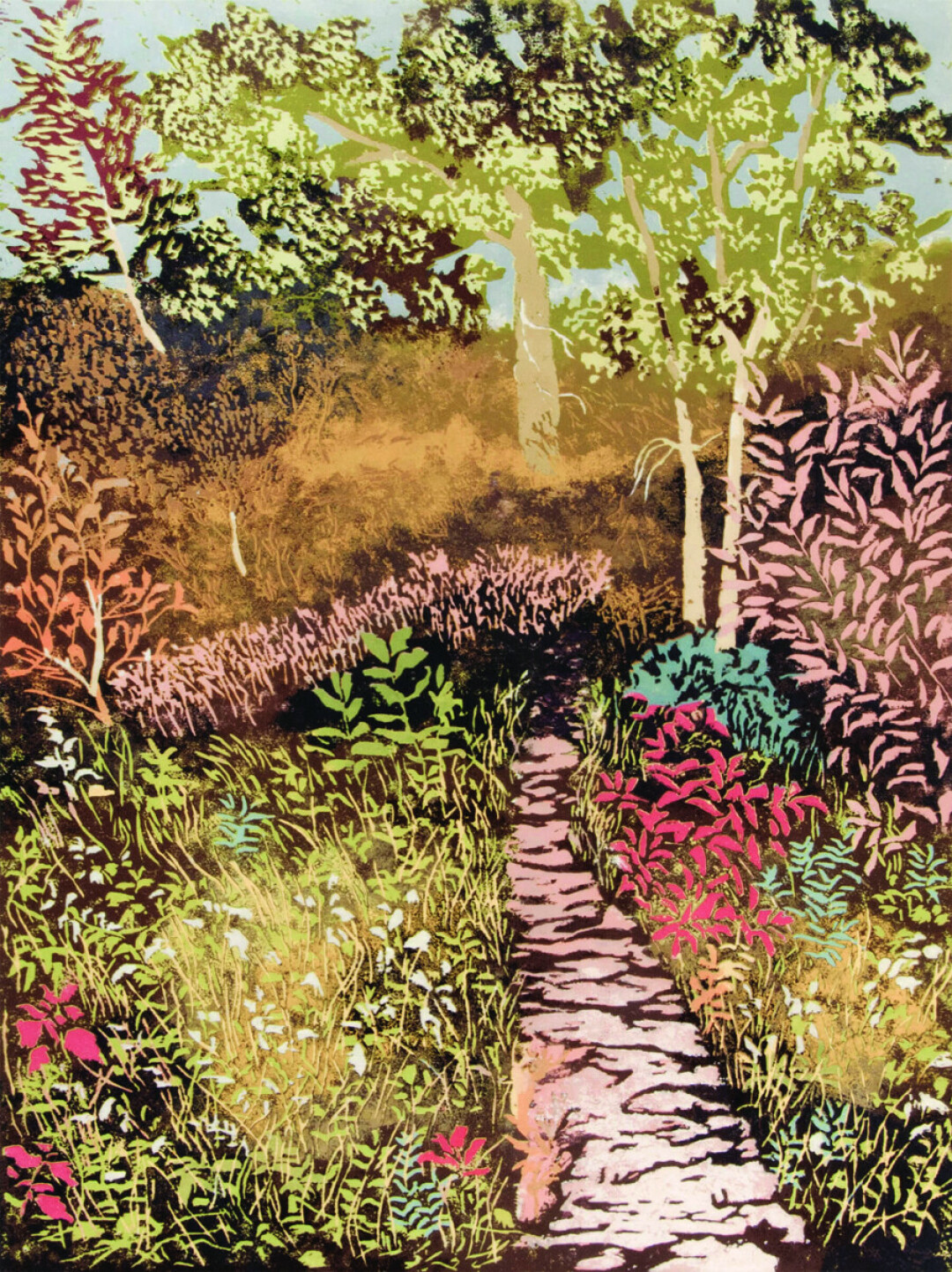 Inking and printing the block is another complication altogether. Edith most often used rice paper on which to print her images, each layer meticulously inked, then printed by hand using a stainless-steel spoon to press the paper against the ink. This time-consuming process in turn makes Edith’s prints valuable. She usually only made 15 to 20 editions of each image. With each new layer of color, the old layer of the woodblock is worked upon in a reduction print, making the number of prints originally printed in a run the max of the edition. Some pieces inevitably don’t make the final edition due to inking issues or little irregularities. Today, people most often associate the idea of prints with a copy. What makes printmaking so unique is that each piece in an edition truly is finished by hand and is really an original in its own right. Most often, pieces in an edition can differ slightly, due to the pressure applied while transferring the ink. Edith’s prints, which used to go for around $40 in the 1980s, now sell for over $3,000. The original woodblocks themselves are even more valuable due to their rarity.

Edith’s work is on a fairly large scale. The image at the Gallatin History Museum measures 18”x22.” When you refer back to the way in which each print was created by hand, you see the monumental task in creating multiples of each piece: hand carving each detail, inking each layer, gently transferring the image multiple times, then doing it all again.

What makes Edith’s work so unique is her subject matter and personal style of portraying her landscape. There are few artists who can so accurately capture the beauty of a place while also imbuing it with the feel. Edith’s work not only looks like Eastern Montana, it feels like Eastern Montana. Her love for her home shines through; you can feel what she must have felt through her use of color, texture and the details of what she chose to portray. Maybe that is what makes all landscape artwork so unique; it’s the voice of the artist, and what they find beautiful.

Edith would also make a career out of something I too would like to do: she taught others. For 30 years Edith taught in rural county schools and elementary schools throughout Eastern Montana before starting her second career as a printmaker. In 1939, Edith married rancher Charles William Freeman, 28 years her senior. They would share a Billings home until his death in 1985 at the age of 100. 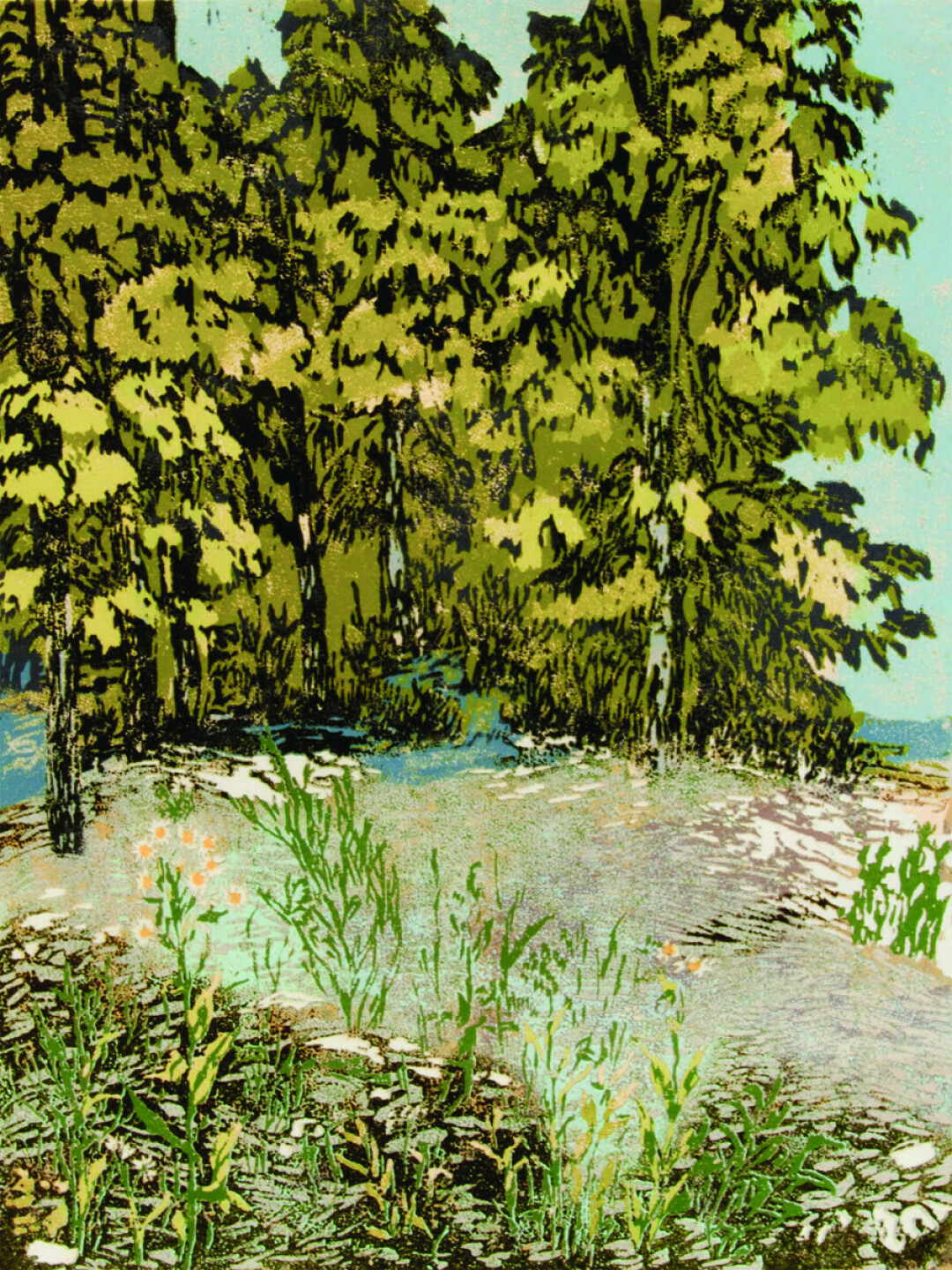 Today the largest collection of Edith’s work resides at the Yellowstone Art Museum in Billings, Montana. Most pieces were donated by her estate with the cooperation of its executor, her brother, Floyd Maxwell. This collection boasts over 60 of her woodblock prints. My favorite piece in their collection is “The Rosy Path,” where the colorful silhouette of leaves and grasses play against each other to create a vibrant pathway leading into a wooded forest. I defy anyone not to want a walk down Edith’s path (which can be seen online in the Yellowstone Art Museum’s Permanent Collection).

The Gallatin History Museum is overjoyed to have found a prized treasure in its own collection. Since its discovery, the piece has been protected in an archival mat and frame that highlights the beauty of her print. In 2018, in celebration of Montana and the Great War, this image of Edith’s was used on a booklet handed out at a commemoration of Armistice Day at Montana State University, Bozeman. What makes this image so compelling is the play of the delicate red and orange poppies against lush green and yellow foliage. Her garden must indeed have been beautiful. How lucky are we to be able to continue to enjoy it long after the blooms have gone, long after its creator too is gone? Edith’s vision of beauty will continue to live on and inspire others to embrace the patience of the age-old art of the woodblock.

Gallatin History Museum: An Amazing Place To Do Research