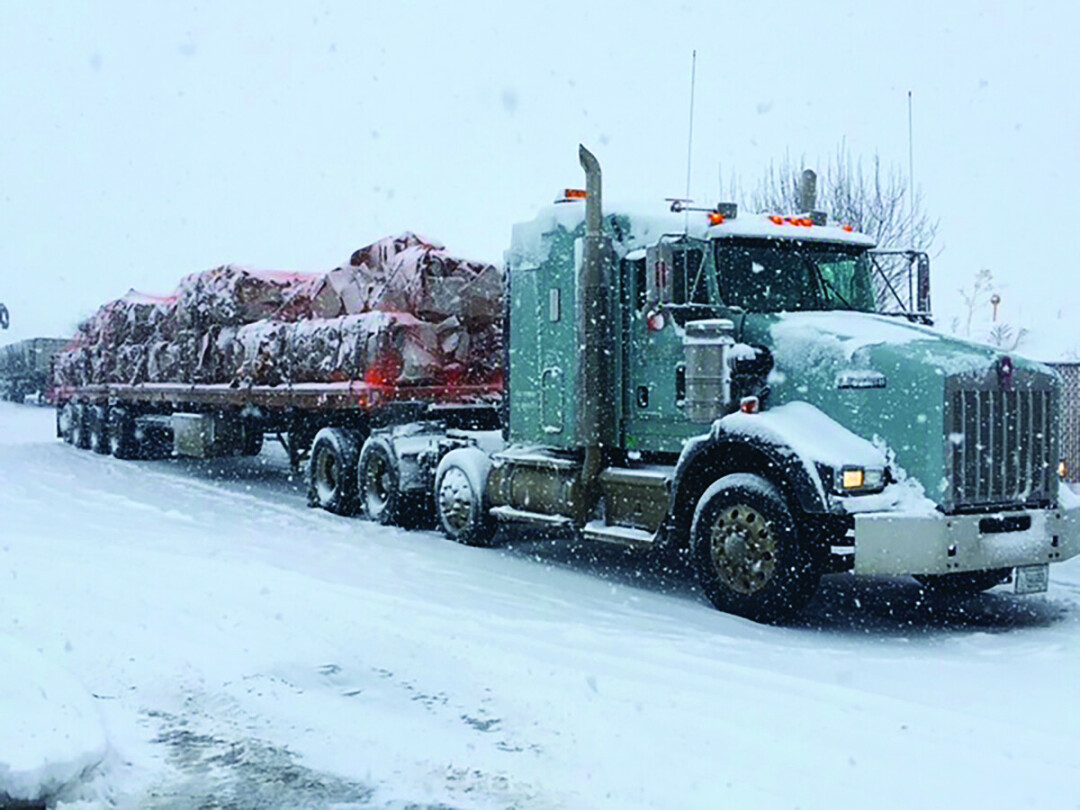 Back in January 2018, I was working as a truck driver for a local company in the Gallatin Valley, driving a flat-bed tractor-trailer, hauling recycled metal from Pacific Steel in Bozeman to the Pacific Steel shedder in Lockwood, just east of Billings. These trips could be done in a day, within the 14-hour logbook timeline, which is the Federal Motor Carrier’s requirement for the majority of all CDL drivers.

Occasionally on my return trip to Bozeman, I would swing up north from Billings, through Lavina, and on to the ghost town of Barber, or to Harlowton, to pick up a load of buff colored flagstone. There are several quarries in this area, unknown to visitors passing through because the quarries are hidden from view down in arroyos or gullies on the area ranches. The three aforementioned towns lie on US Route 12, which in this area follows the route of the long ago abandoned Milwaukee Road transcontinental railroad. I always enjoyed this drive, picking out the remnants of the railroad bed, bridges, and trestles, beautiful wide open spaces, with very little traffic.

On this winter morning of 2018, leaving Bozeman, I was pulling an empty 53’ trailer, heading west to the Bitterroot Valley, for my pick-up. This trailer is known as a “Maxi,” because of its extra axles, for carrying extra weight. A standard semi-truck set up is 10 wheels on the tractor, eight on the trailer, for a total of 18 wheels (hence the term “18 wheeler”). My semi had 12 on the tractor, and 14 on the trailer, for a total of 26 wheels—a lot of tires and brakes to keep track of! This tractor had an extra axle of two wheels, which could be lowered with an air switch for extra weight, and it is known as a “push axle,” or “pusher.” The trailer had the same setup at the very rear; this axle was known as a “tag.” My destination was in Victor, MT, where I was to pick up a load of recycled, crushed cars, and then take this load to a recycling yard in Portland, Oregon. I found the recycling center in Victor—really just a crushing machine in a field, with big grappling tongs, similar to salad tongs, to pick up the car cubes to load on my trailer. I parked nearby on the pavement and left my truck to investigate the entrance and exit of the field, and the two-track path, to look for barbed wire, depressions in the ground, or scrap steel or concrete sticking out anywhere. I had learned to never take someone’s word, but to go look for yourself for hazards, or you might be spending the night in a broken truck! This is why you sometimes see a semi parked in the middle of or on the side of a highway; the driver probably went to go look ahead. 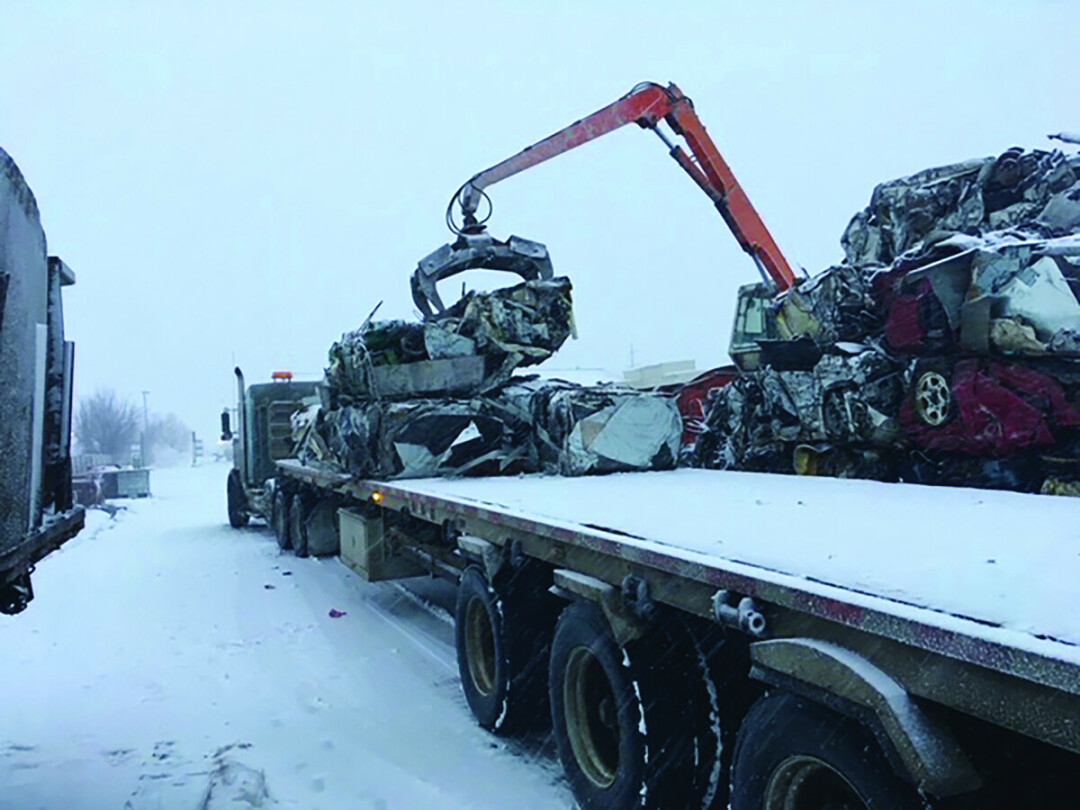 The loader and I were keeping a tally of the approximate weight of the car cubes: I could take on about 60,000 pounds, or 30 tons; with a full load, my normal gross vehicle weight for the whole semi was between 102,000 and 106,000 pounds, or 51 to 53 tons, thereby using those extra axles. A normal 18 wheeler semi that you may see many of per day has a GV weight of 80,000 pounds, or 40 tons. I chained the load to the trailer, with 10 or 12 chains thrown over the top. We then covered the whole load with plastic netting, to catch car parts or scrap from the cubes.

Now leaving Victor, the real part of my run began. It is more work to watch your load in the mirrors, your 10 or 15 instrument gauges constantly, for oil, coolant, and air pressure readings, as the truck is working hard now, and to gauge the traffic signals and the cars all around you. You can’t just stop or change lanes quickly in a 100,000-pound vehicle! As I drove north on US 93 towards Lolo and Missoula to connect with westbound I-90, I was thinking it would be great if I made it to Spokane or Ritzville, WA, before my 11 hour drive time ran out on my logbook. After negotiating the miles of traffic on Reserve Street in Missoula, I finally made my connection to westbound I-90, and Portland, here I come! The distance from the Bitterroot to Portland was over 550 miles, and a long way to haul a recycling load, but I was told that the backhaul load from Vancouver, WA paid really well. As I motored down the highway, westbound, I knew I was going to run into some winter weather on the passes ahead, but didn’t know it would be a blizzard! 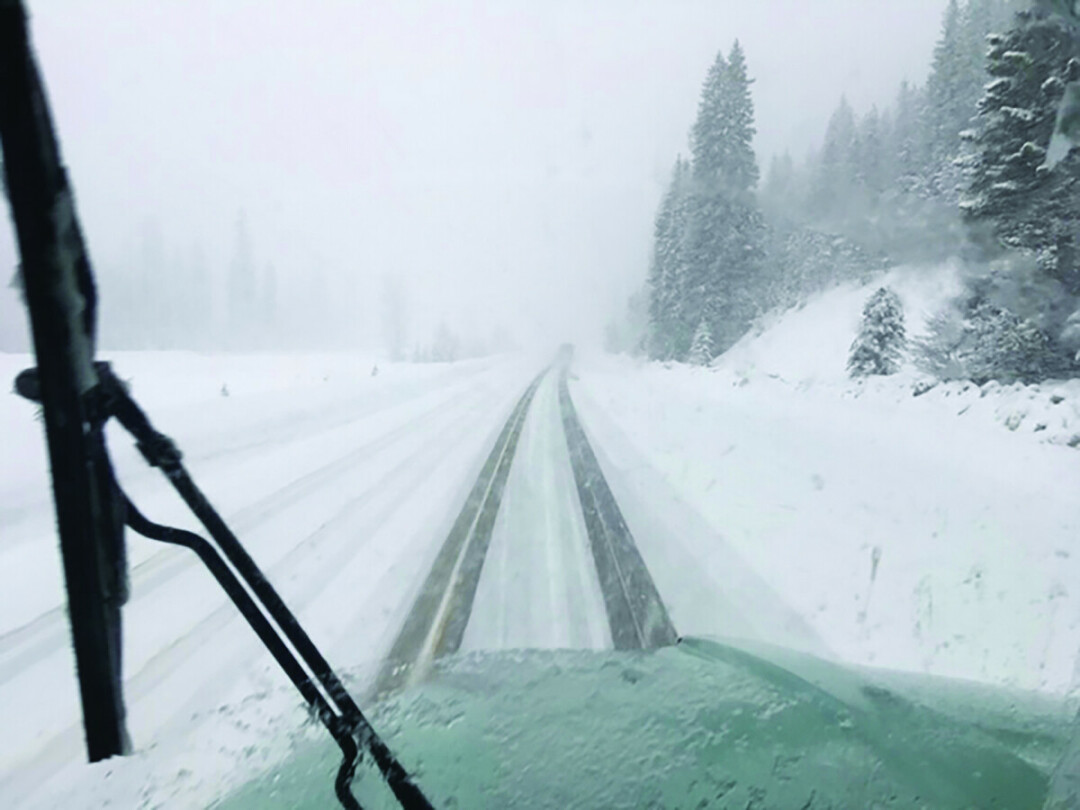 Nearing the edge of Montana at Saltese, things began to look wintery: the snowflakes were falling hard, and the road became a two-track lane through the white. I was passed by another semi going full blast, disappearing into a whirlwind of snow. Regarding this driving style and the lack of “chain law in effect” signs or warning lights, I continued on. With no cell service for miles, the CB and radio were tuned to local channels, my “ears on” for weather or accident info, but I heard only silence. As I climbed Lookout Pass, the road became steeper, the downshifts more frequent to maintain my speed. All of a sudden, I felt the tires slip and the truck shudder! I knew immediately I was losing traction, and I tried to recover the truck as we bounced up and down. I threw a switch to lift my push axle, to put more weight on my drives, two or three switches to lock my drive axles to reduce spinout, and downshifted, all within a second or two while accepting my predicament and steering my truck towards the shoulder, without sliding off the mountain. I came to a stop partially on the shoulder; with no way to move forward or back without spinning out or sliding, the highway soon became a parking lot with stuck vehicles. A semi with a van trailer was stuck next to me; as I waited for everything to calm down, I watched the truck inch closer to me as he spun out while trying to move forward.

Time to chain up. I got out and pulled the freezing, iced up mess of tire chains off the racks by my drive wheels. Hooking the chains on the inside of the duals requires lying on the ground to reach the hook and loop, to fasten it behind the wheel. I did this with thoughts of my wife and new baby back at home, and of how my life would be sold cheaply (at $21 per hour) if the truck broke free and slid off the mountain, crushing me and taking me with it. People were leaving their cars and trucks to assess the conditions, and talk to each other. As I was installing the chains, I noticed two guys in big coats walk up, watching what I was doing. They were the drivers of the semi stuck behind me, two young Black guys from Georgia, in their 20’s. They asked if they could watch; I replied yes, and tried to show my method of installation. As I finished, they explained that they had never put on chains and that their boss had told them not to do it. I replied that they wouldn’t be moving off the mountain if they didn’t. I helped install their chains, along with a drag chain on the back trailer wheel, and gave them some bungee straps to secure them. They were very thankful for the assistance, and we returned to our trucks. With the vehicles ahead stuck all over the place, it was an hour or so before we could move forward. As the road became clear, my truck jumped up as I released the brakes and let out the clutch, giving it power as I spun on the chains slightly, going uphill. I was glad they didn’t break under the heavy strain.

I soon made it over the pass, crawling down the other side, and found an exit to pull off and remove my chains. As I exited, I was passed by the guys from Georgia; I was glad they’d made their way out safely. My 11 hour drive time ran out at the small town of Osburn, ID, where I pulled off I-90 and into the small downtown, looking for a place to park and, hopefully, find a meal. I was kicked out of the first place I stopped, where I checked on my truck and load, which was covered in about a ton of ice. I asked the man there where I could park, and he told me to check with the bar across the street, as this was the only place in town that was open. The barkeep was helpful, gave me permission to park next to the bar, and offered me a bowl of homemade soup and a place to change out of my frozen and soaked clothes. She had lived in Livingston, MT previously, and I enjoyed the brief visit and hot food before I retired to my truck for a good rest. 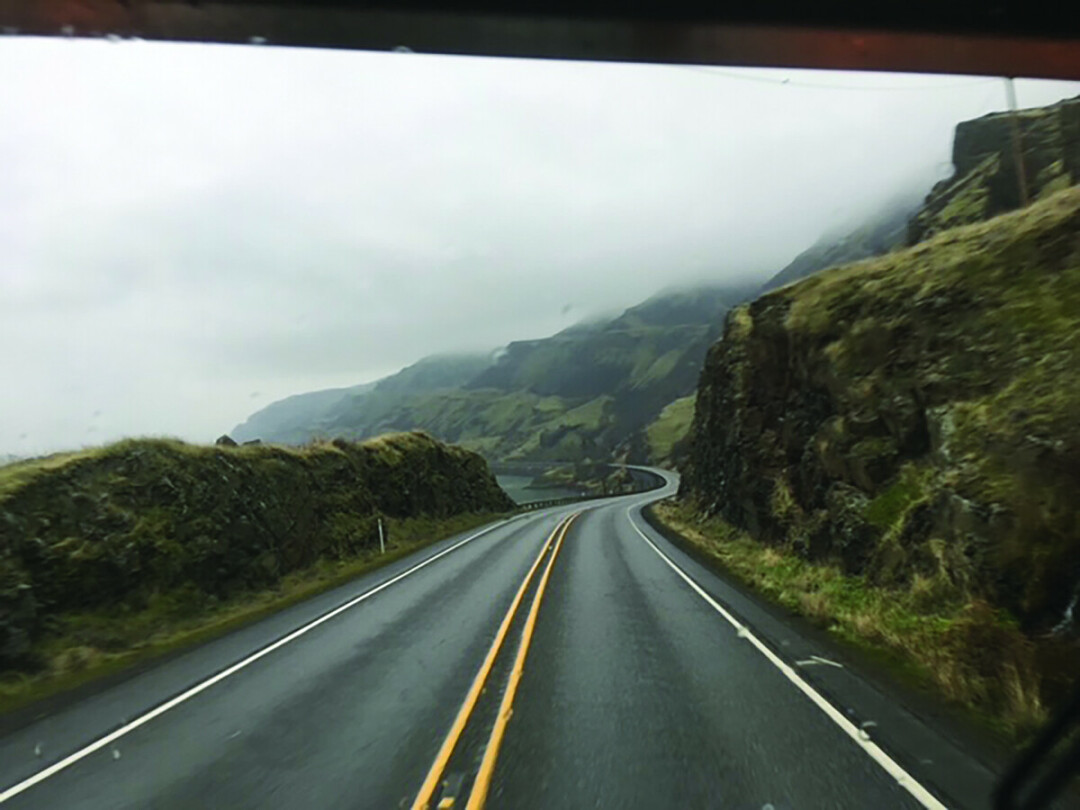 The next morning, I was looking forward to a day of smooth sailing, and it was so as I made my through Spokane, then south towards Oregon. Just before the Oregon border, I turned west and followed some other trucks onto Washington Route 14, which began a scenic 175-mile drive on the north bank of the Columbia River to Portland. Memorable to me were the views of the miles-wide river at the start, the Mary Hill winery and estate, The Dalles, and the curved tunnels which were too short at the sides for the exhaust stacks on my truck, which forced me to drive through the middle of the tunnel to clear. The lighted bridge close to Portland, featured at the end of the movie Wild with Reese Witherspoon, was a surprise to see! I drove through the big city traffic to drop my load at the recycling yard in Portland, then on to the old Jubitz Truck Stop, where I parked for the night in the pouring rain. The truck stop diner looked larger than any restaurant in Bozeman, with me and about five other people dining there.

My return load of square tubing was waiting at The Port of Vancouver, where I picked it up the next morning. This steel load was from South Korea, weighed about 20,000 pounds, and was headed to Pacific Steel in Billings. After the previous day’s excitement, I was glad for the light load, and enjoyed my return drive before I had to stop for the night in Milltown, MT. After dropping this load in Billings the next day, I was happy to make it back home to Bozeman. I always enjoy coming home! 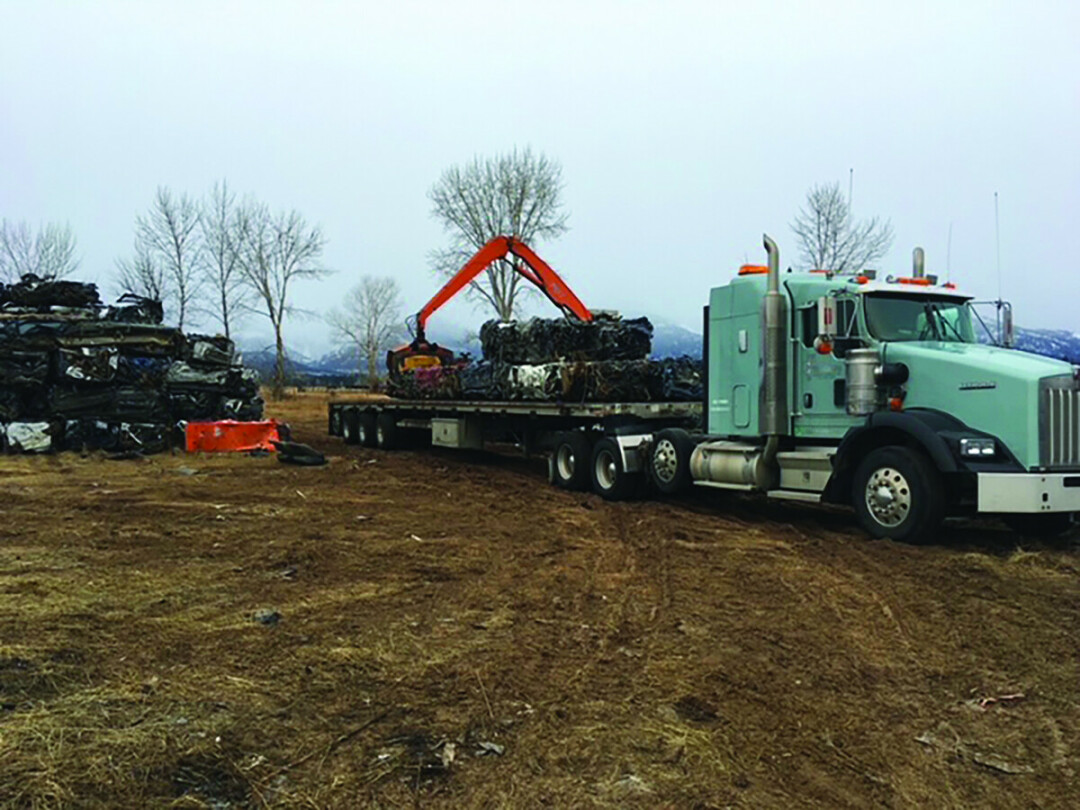 Dan Hill is a single dad of two young daughters, he works as a carpenter and real estate agent. His free time is spent exploring and enjoying this beautiful area with his girls, where he has lived for the past 23 years.

Stewards of our Spaces