Last summer, the Gallatin History Museum debuted an exhibit showcasing 35 hand embroidered panels. Each panel gave a brief glimpse of the history that shaped Gallatin County, and each was completed by a current or former Gallatin County resident. This community project was started in December 2020, in an effort to bring people together while we had to remain apart during the Covid-19 crisis. The project began as a dozen panels depicting key moments of the area’s history. We quickly sold those panels to interested artists, with a waitlist for more. In the end, 35 panels were created by both experienced and brand-new embroiderers.

The natural world was celebrated in every panel, paying homage to the land that makes this area home, and to the story of the Valley of the Flowers. As an artist, I took each idea and searched for ways to best represent the concept while presenting something visually interesting. Not having much experience embroidering, this was a difficult task; however, I believe this meshing of hands may have led to something beautiful. When receiving the completed panels, I heard multiple times how the work was like painting with thread, and that once they got into it, the artist in them came out. For some, it was an artist they had not even known was there.

This community project has its roots in a trip I took to London with my dad in 2017. I was lucky enough to see the Mount Felix Tapestry, a series of embroidered panels chronicling the history of the WWI No. 2 New Zealand General Hospital in Walton-on-Thames. I brought a book back with me that shared an image of each panel with information about the history and those who had embroidered it. At the time, I thought this could be a great idea. Then came the Covid-19 crisis and I realized that this project had been waiting for just a moment like this to uplift people in the community through working together while we had to stay apart.

Much like the book created for the Mount Felix Tapestry project, the Gallatin History Museum created a little booklet sharing the history of the panel depicted, along with a word or two from the participants. Here is a brief look at some of these panels and the history they depict. 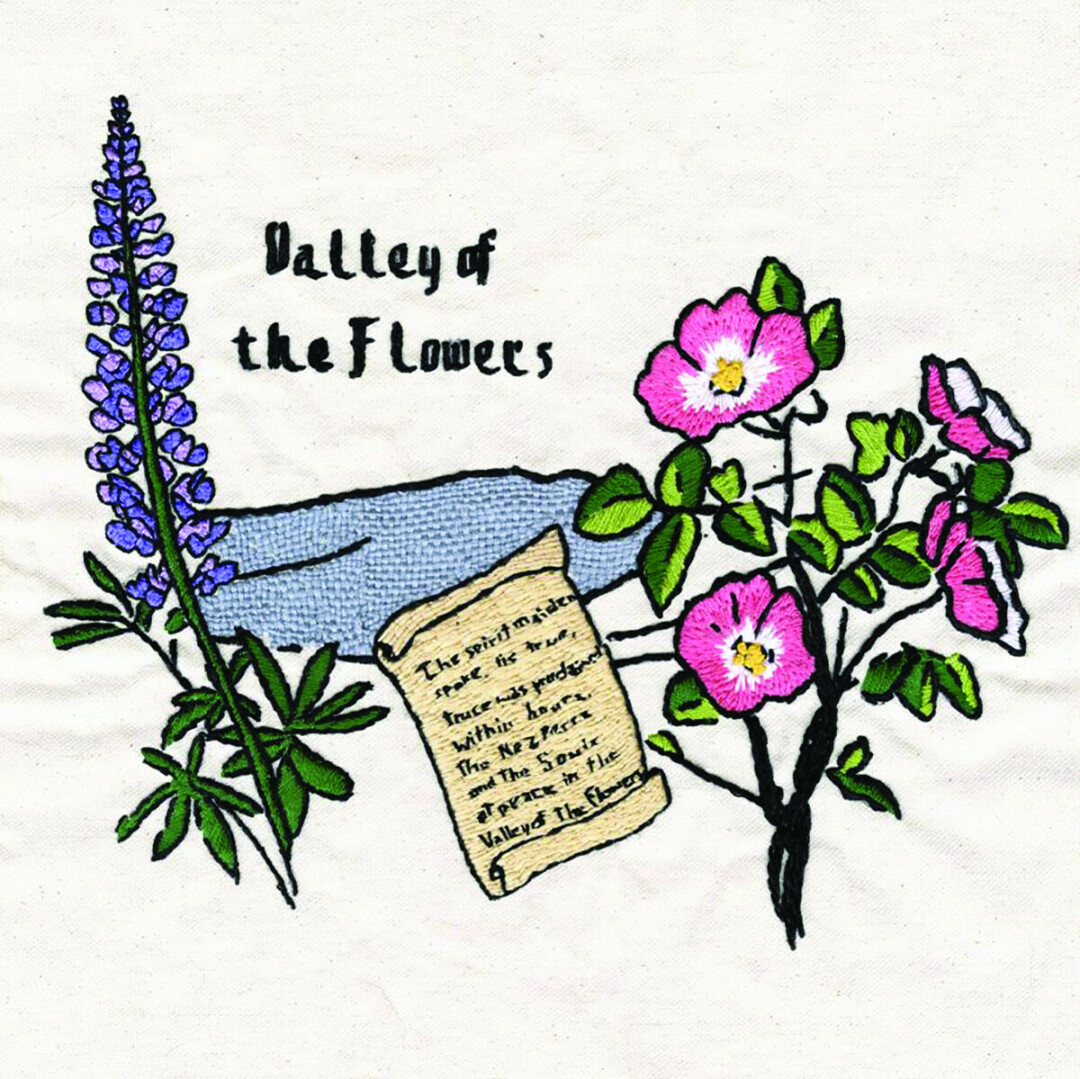 Valley of the Flowers
The Gallatin Valley has many names, one of them dating back to an Indigenous beginning with a story that inspires hope, in which this area is called the “Valley of the Flowers.” Many of us living here today can connect to that wonderful time of year when the mountains come alive with color, as described by Melanie Mangione, who embroidered this panel: “The Valley of Flowers was a special panel for me. Spring is my favorite season, and when the fields come alive with a rainbow of color in early summer as the flowers bloom, it lightens my heart and makes me smile. I chose this panel because it reminded me of my favorite hikes through the rolling hills and mountains with the lupine and wild roses everywhere.” 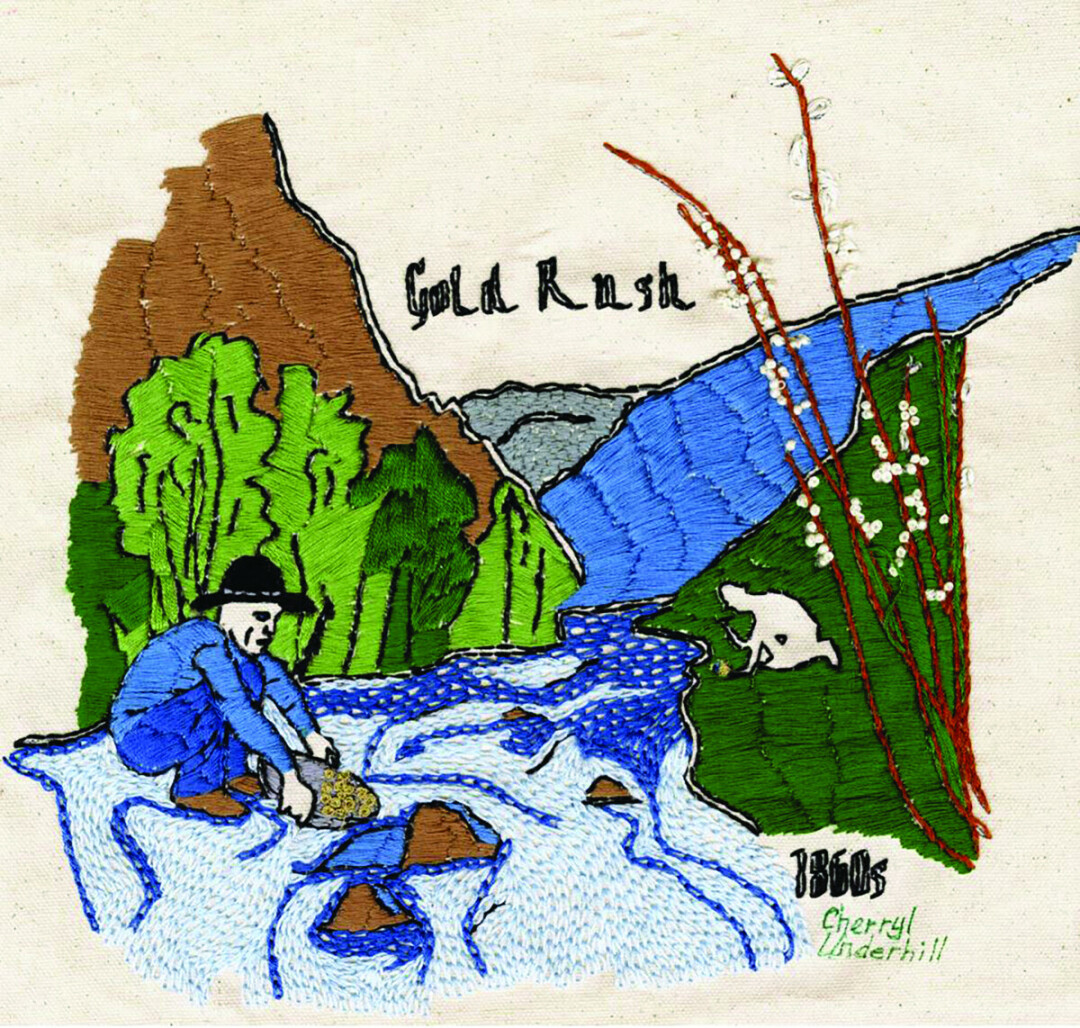 Gold Rush – 1860s
The gold rush in Montana began in 1862 on Grasshopper Creek near Bannack. As prospectors flocked to the area, some would search for gold close by, leading to more gold being discovered in Alder Gulch a year later. Although there were many who struck it big in the Montana Gold Rush, there were also those who did not. Those whose luck was not good traveled to other parts of the territory to find other ways of life. Many came to the Gallatin Valley in search of new wealth. Shortly after the discovery of gold in Montana, the city of Bozeman was established, and soon became a supply point for those making their way to the gold fields near Bannack. This panel was embroidered by Cherryl. 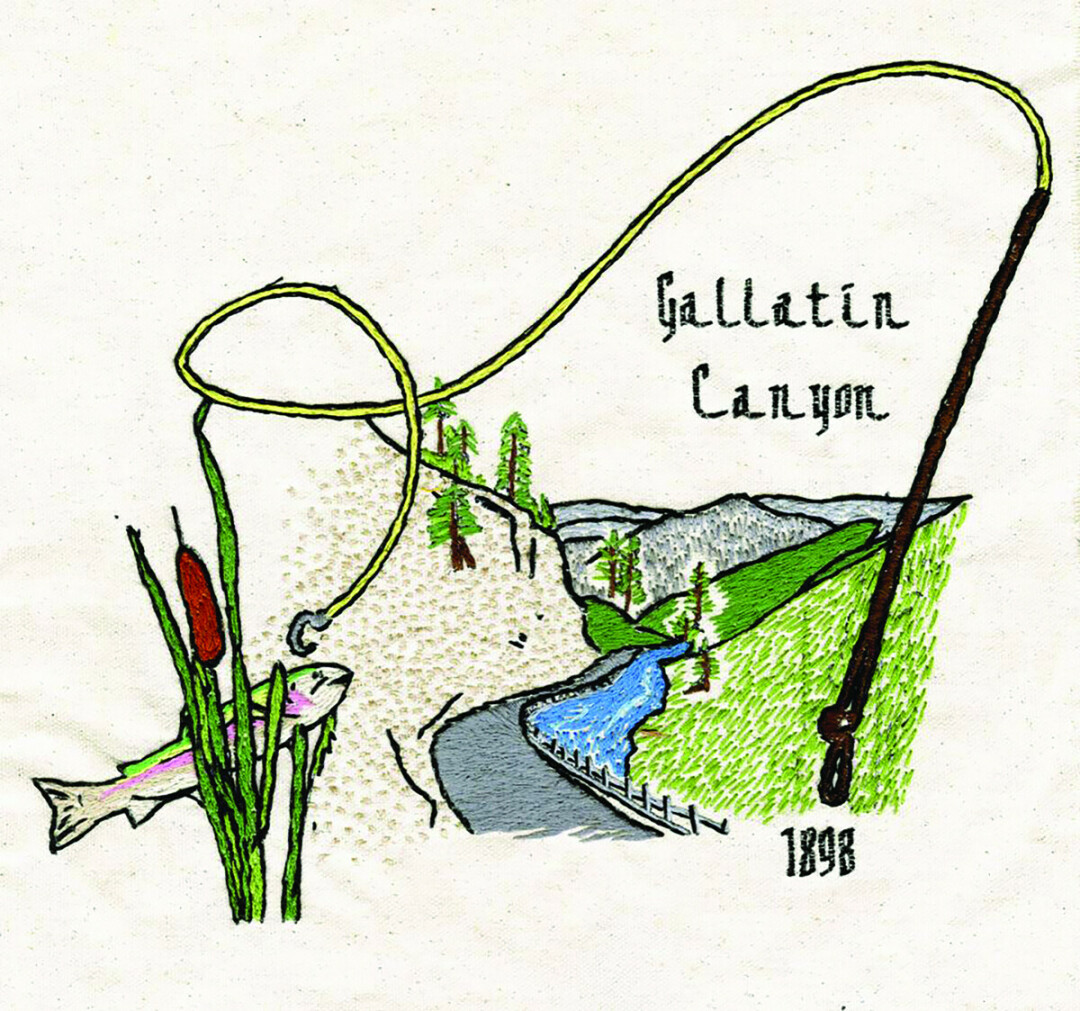 Gallatin Canyon
As settling in the Gallatin Valley became more popular with cattle farmers, the demand for a road in the Gallatin Canyon became more intense. Many farmers saw the canyon as much-needed grazing land for the increasing number of cattle, and miners believed the canyon would be rich in minerals, like the surrounding areas. In 1883, a survey was conducted for a wagon road in the canyon; the crew found the best route from Salesville to Squaw Creek. However, the road proposal was denied by county commissioners in 1891.

In March 1892, Lewis Michener presented a petition signed by 600 county residents to the county commissioners, stating that the Gallatin Canyon Road was wanted. By September, another survey team was sent out and the price of construction was estimated. It was not until March 1897 that one Mr. Cockerell paid for two bridges to be built over the Gallatin River. Sparking the demand for a road again, Cockerell also won the bid to build 32 miles of road in the Canyon. The first section of the Gallatin Canyon road was completed in July 1898.

Kathryn Seeburg, who embroidered this panel, shares her experience: “I have lived in the Gallatin Valley just north of Gallatin Gateway for over 40 years, and the view from my living room is of the southern Gallatin range and the Spanish Peaks. I look towards Gallatin Canyon daily and have driven through the scenic canyon often. It seemed natural to pick Gallatin Canyon as my project. The stitches used include satin, straight, split, stem, scroll stitch for the riffles in the river, and a French knot for the fish eye. It was a fun project to work on and the completed project should show off our beautiful valley.” 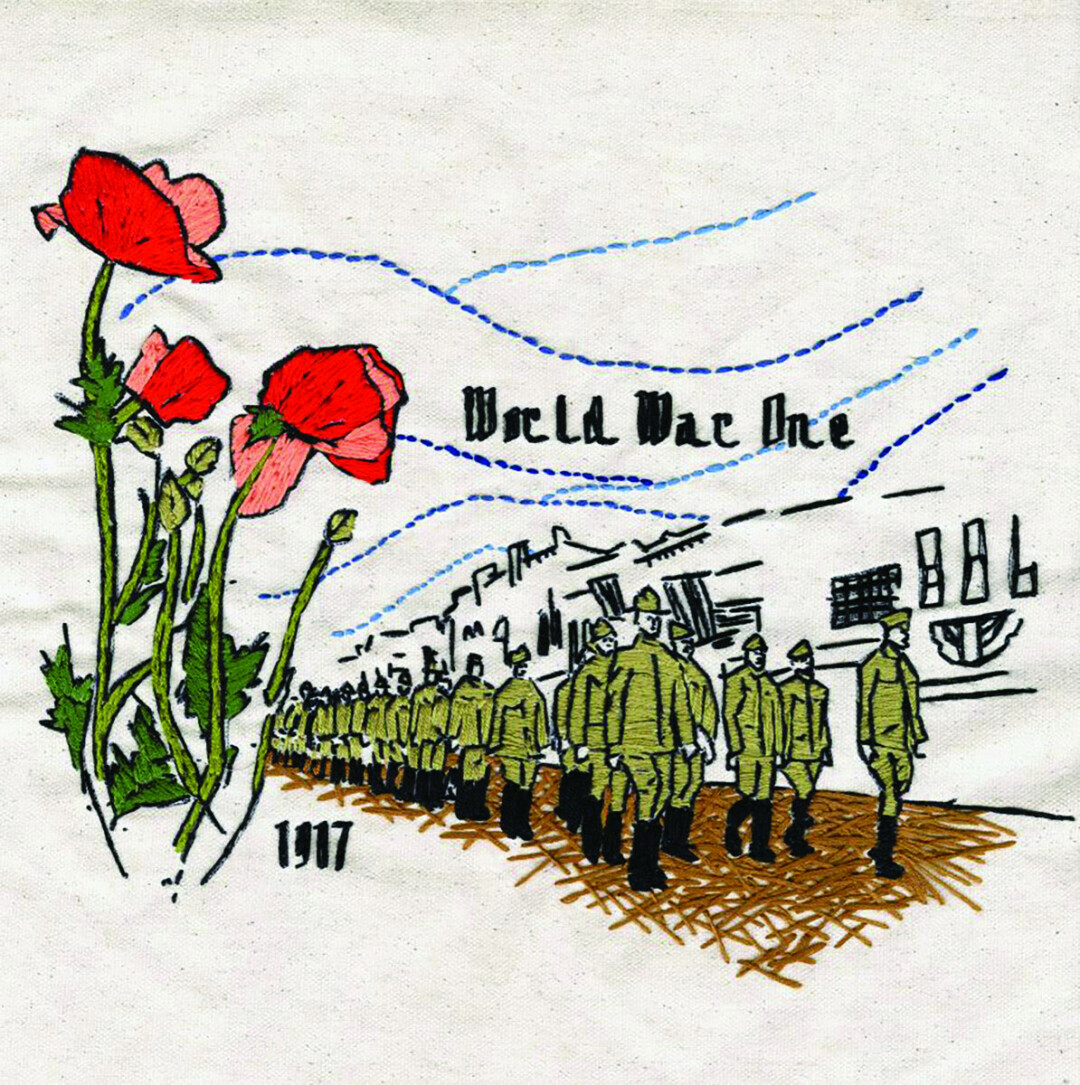 World War I – 1917
In 2018 I was privileged to work with a wonderful group of people on the project Legacies and Memories of WWI: Commemorating the Armistice. I got to create an exhibit at the Gallatin History Museum that included a replica of a trench, something that was so much fun to make. Participating in a WWI poetry reading, researching and writing about those affected by sedition laws, and releasing a homing pigeon in honor of those who lived through such trying times all will remain a fond memory. It was so important to me to work alongside the participants of the projects so I could better understand the medium we were all using, and the different techniques. 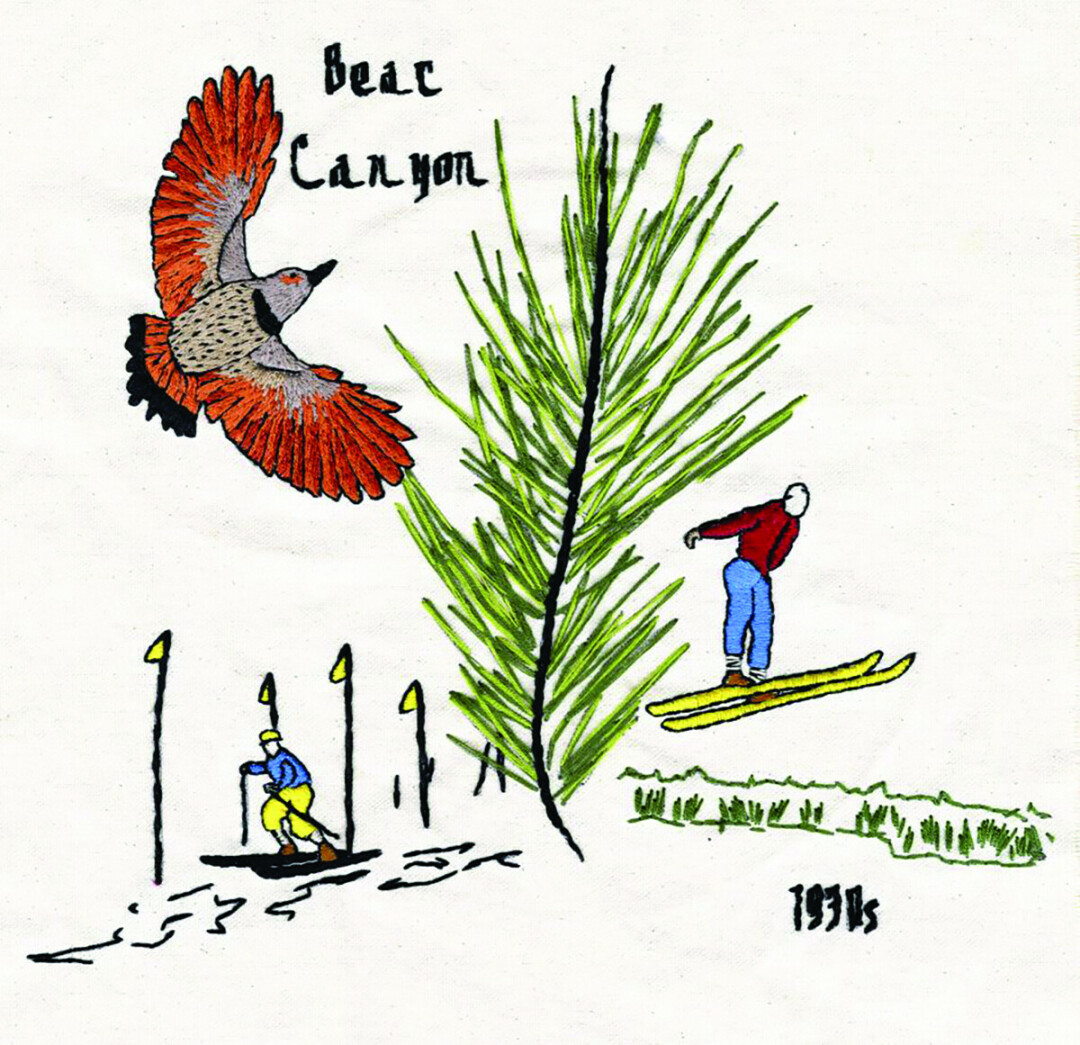 Bear Canyon – 1930s
The 1890s saw Bear Canyon as a booming place, with the Cooper Sawmill and many homesteaders calling it their home. By the 1930s the area was making itself known to recreation—skiing, in particular. The slopes at Bear Canyon boasted an interesting event, public night skiing. Railroad flares were used to light up sections of the trail for these brave skiers. The ski jump was also a big hit. The lifts at Bear Canyon ran until 1975, although Bridger Bowl and Big Sky had already started to steal its glory. Today, the slopes are still used by students at Mount Ellis Academy. For embroiderer Jennifer Buchanan, this panel represented a big part of her life: “I chose the Bear Canyon panel because I have spent a bunch of time up there on skis imagining what it was like back in the day. It’s a place my husband and I love to go for a quick escape from our busy lives.”