Celebrating the Genius of the Grateful Dead: Cornell ‘77

On a cold, blustery, wet Mother’s Day evening in Ithaca, New York, thousands of fans waited impatiently for the doors to open to Barton Hall, a low-slung brick building on the campus of Cornell University. Inside, the Grateful Dead were poised to play the second of three consecutive nights on their May 1977 tour. By the end of the evening, as the last note rang through the hall, those who had braved the cold and snow left having witnessed a show that was to become legend.

In all, the Grateful Dead performed approximately 2300 concerts during their 30 years on the road. The band was renowned for their incendiary live concerts, with setlists that changed for every show. Yet, the Cornell ‘77 concert stands out as the most lauded in the band’s history. In 2009, the New York Times proclaimed the May 8, 1977 show as the favorite of both fans and band insiders.

Forty-five years later (to the day), Dead Sky, the Bozeman-based Grateful Dead tribute band, will recreate this extraordinary show at The Elm. What makes this show such a touchstone for long-time Deadheads and new fans alike? Kelly Nicholson, vocalist for Dead Sky explains; “The Cornell show represents a golden age of the Grateful Dead and, as a band, we tend to heavily lean into the music from that era. The Dead had started evolving from their psychedelic origins earlier that decade, gravitating towards a kind of cosmic Americana vibe, and they were playing incredibly well by the time they appeared at Barton Hall in May of 1977.” 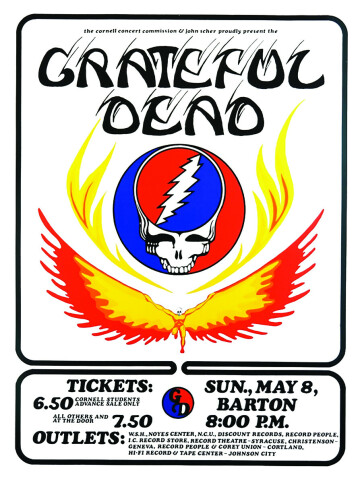 Undoubtedly, the Grateful Dead was firing on all cylinders in the spring of 1977. The band was in the final stages of recording Terrapin Station, their first release with Arista records. Legendary music producer Clive Davis courted the Dead for his new label, and paired them with Keith Olsen, a powerhouse producer. The studio album was more orchestrated than most of the Grateful Dead’s previous work, to the chagrin of the band, but the songs included on the record were already staples of their live performances. Although the album hadn’t been released at the time of the Cornell show, the Dead never waited to debut a song until an official release, and many of the tunes were already enmeshed in setlists by Spring of ‘77.

The Cornell concert showcased the energy and excitement that the Grateful Dead embodied. From the opening chords of New Minglewood Blues through the last notes of a joyful version of Dancing in the Street, the first set was tight; the energy and musicianship of the band on peak display. The setlist traversed multiple musical styles including country, funk, and Americana. The second set cemented the legend of this performance. The Dead opened with a 27-minute Scarlett/Fire, a combination that had only recently made its way into their repertoire. The band hardly seemed to take a breath during the two-hour set. They closed with a magnificent Morning Dew. The encore, One More Saturday Night, sent the tired and frenzied crowd out into the snowy evening, sure they had witnessed something special.

Between the setlist and the performance, the Cornell show was a scorcher; one that would be indelibly burned into the mythic story of the Grateful Dead’s history of incredible performances. Those who were there would carry the memory. This concert, however, transcends that moment in time, due to two interconnected factors that made the Grateful Dead unique—the culture of taping and the generosity of the band and its crew to the fans.

Taping, the practice of fans bringing recording equipment into shows and then sharing their recordings with other fans, is inextricably linked to the Grateful Dead. From the earliest recordings at the Acid Test parties in 1965 through the last show, played at Soldier Field in 1995, no band has more live recordings accessible to their audience than the Grateful Dead. Currently, the Internet Archive hosts over 16,000 Grateful Dead concerts (many shows are available in duplicates), which gives longtime Deadheads, as well as the Dead-curious, an opportunity to both discover new shows and relisten to old favorites. There are twenty-three versions of the Cornell show available on the Internet Archive, which include both soundboard and audience recordings. At last count, these versions of the show have been accessed over three million times.

While access to the Internet Archive is a 21st century phenomenon, the Cornell tapes were in circulation soon after the show ended in 1977. Jerry Moore (a legendary taper) sent his recording of the show to Dick Latvala, another taper who was soon to become the first Grateful Dead Archivist. Latvala wrote that the Cornell show was the best of the May ’77 tour. But perhaps the unsung hero of preserving the magic of the show is Betty Canton-Jackson, one of the Grateful Dead’s recording engineers, and the master behind “Betty Boards.”

Cantor-Jackson was an adept sound engineer who wanted to have audiences “live inside the music.” Her recordings were as close to being at the show as technically possible. The Cornell show was one of her finest recordings, and has been widely circulated throughout the Deadhead community. According to Nicholas Meriwether, in his liner notes to the official release of Cornell ’77, the Betty Boards for this show were sonically excellent, and their release is what cemented this show as the pinnacle of the Grateful Dead’s live performances. In 2011, the National Recording Registry selected the Cornell ’77 concert for preservation in its archives. The collection, held at the Library of Congress, noted that the concert had achieved almost mythic status because of its excellent sound quality and early accessibility.

Forty-five years later, Montanans have the opportunity to relive this magic evening, with a new twist, courtesy of Dead Sky. For those of us who, for whatever reason, couldn’t make the show in Ithaca, this is our chance to experience the magic that was the Grateful Dead. Kelly Nicholson shares: “Cornell is a classic show that many people are familiar with. It also serves as a gateway for many new Dead fans, and continues to bring people together. We’re looking forward to playing this show as both an homage to the incredible legacy of the Grateful Dead, and to our bandmate and friend, Joe Knapp, who passed away this time last year. The wheel keeps on turning and we’re just thankful to be along for the ride.”

Listen: Cornell 77: Live Release from the Grateful Dead (be sure to check out Nicholas Meriwether’s liner notes)

Read: Peter Conners’ Cornell ’77: The Music, the Myth and the Magnificence of the Grateful Dead’s Concert at Barton Hall

Susan Balter-Reitz is a Professor of Communication, Montana State University Billings and host of The Dead of Night, which airs Saturday nights at 9 pm on Yellowstone Public Radio.