Sitting Around the Table with Jacob Rountree

Mid-April, I had the opportunity to sit down with Jacob Rountree, an up-and-coming singer-songwriter who has been building momentum in the Pacific Northwest, particularly in Bozeman, over the last five years. Jacob won Bozeman Magazine’s “Bozeman’s Choice” 2022 Solo Artist of the Year Award, and has been an integral part of Gallatin Valley’s music scene since he arrived from Spokane. His sophomore album, “As I See It” is slated to debut in two short months. A release party, a mini tour through Washington and Montana, and a few surprises along the way for listeners will celebrate the debut. Jacob and I chatted about the new album, its vibe, the music contributors on the album, and the growth of his development as a musician in the times of COVID.

Missy Glenn: Let’s talk about the album — when did you record it?

Jacob Rountree: It has been a three-year process. I had an old trio, and we had recorded it all. Then, I listened to it for a while and there were a lot of things I wanted to change. I sat on it, and then COVID happened and we stopped playing live as much. So that gave me a lot more time to focus on it. Then the band ended up going separate ways [during] my second iteration of re-recording it. I started to have to figure out how to play the drums myself, or hire other drummers. I started outsourcing; some of the songs were even recorded a third time, just to make sure it was truly what I wanted. So if anything good came out of COVID, it was patience, and [COVID] definitely gave me the time to really sit there and feel like I wasn’t as much in a competitive space — where I’m falling behind if I don’t get it out, or things like that. With the new digital world, everyone talks about quantity over quality and we just need to keep posting, keep posting. I had that pressure for a long time. COVID kind of slowed everyone down equally. So it actually gave me the time to be like, okay, I’m actually going to make this exactly how I want it. I would say the majority of what you’re hearing now happened in the last year. I moved out to Belgrade a couple years ago and now I have my own home studio and stuff, so I got to record it all myself, which was a lot of fun.

MG: Who would be in the band?

JR: Cole Thorne; I’m having her do some auxiliary percussion, which is a lot of fun. She adds backup vocals and harmonies as well. Yeah. And then a new friend from Austin, Texas has moved out here — Alex Speed. He’s doing guitar for me, and it’s fun. My old version was just drums and bass with female harmonies. I’ve never had the second guitarist, but he’s filling up a lot of really cool ambient textures in space. And then just last week, we added Andrew Olivo; he used to play bass for the Hawthorne Roots, back in the day. And then myself. So we’re a four piece now. I would love to get the full kit drums in the future. But I’m actually really enjoying Cole’s stripped down kind of drumming. The album has a full kit drummer, but live they’re hard to find, and they’re getting really busy. So, I’m having Cole do this kind of stripped down thing, which is really fun, too, because it gives a lot more space to the vocals and guitar than a full drummer. Luke (Scheeler, with Jericho Studios) helped master and do the final mix on this album, so I gotta shout out — he helped me out a lot! On the album itself [are] harmonies of Leah Dobby, the percussion of Marcus Bendon, the bass of Keelan Evins, the auxiliary percussion from Andrew Tumason, the cello from Leslie Fox, and the drumming of Alex Platt. 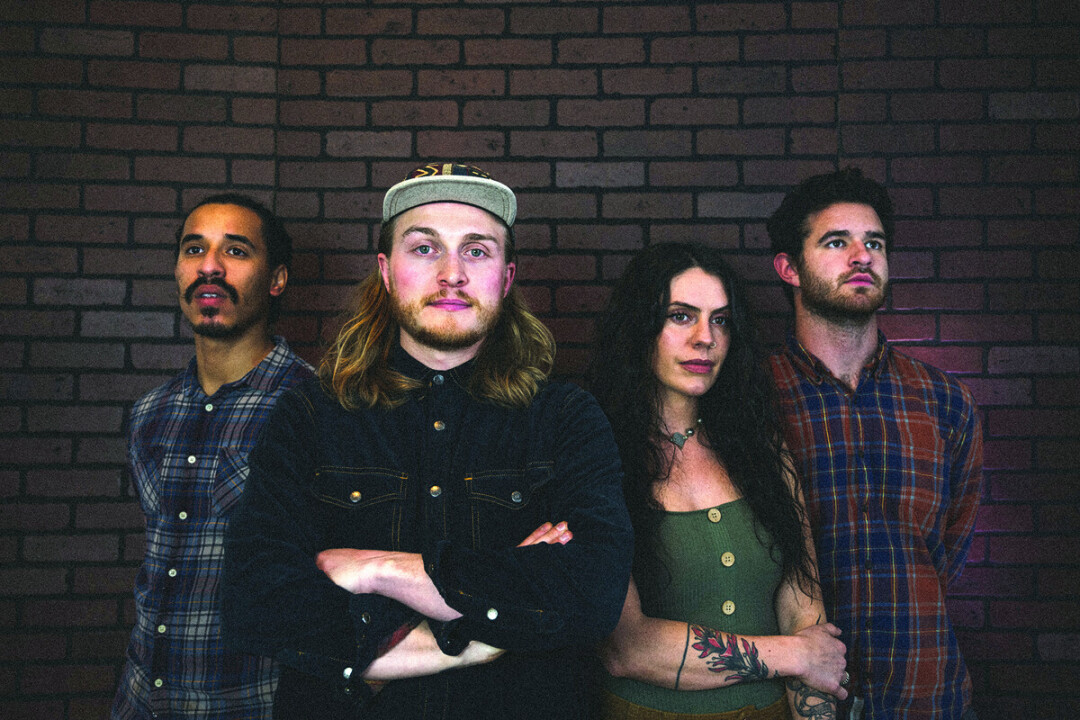 MG: How would you describe the album? The album’s vibe, or what you’re trying to convey with it?

JR: Absolutely. I think the most exciting thing about it is how diverse it is. My first album was very soft, raw, singer-songwriter. I didn’t want to lose any of that, so I still have some of that just really beautiful, soft stuff. But the production is a lot greater. So no longer is it just kind of acoustic guitar and vocals. I mean, it’s like 60 layers in most every song. It’s a big production. It would go anywhere from grungier blues — there’s even some psychedelic stuff on there. There’s also just some really good acoustic rock, soft rock, singer-songwriter kind of stuff, too. I would call it “Alternative Indie.” I love how alternative indie is the odd category of categories.

MG: When does the album come out? Where’s the release party?

JR: June 3rd. The release party is going to be in Manhattan at Tailored and Tied. Cooper and Lex are wedding designers. That’s kind of their main gig. This space out in Manhattan was their showroom. In the last, maybe six months, they’ve opened it up to be a beer/coffee kind of bar. And so now it’s just like a beautifully designed room for their wedding business, but also a storefront. So I’m renting that out with them. June 3rd, doors at 7pm. I think it’ll be capped at about 175 people, and it will be ticketed. The album’s coming out June 3rd, and I’m releasing a single on the 6th of May, the 13th, and the 20th of May. They are three singles that will be on the album.

MG: And so, when you do a song or album release, what platform do you do that on?

JR: That’s gonna be all platforms. I just kind of clicked the box of all platforms. I mean, it’d be anything from Spotify, Pandora, Apple music, iTunes. More websites than I’m even aware of! I do have my own YouTube as well, which is probably the most up-to-date right now. If people want to see the evolution of me as an artist, I would turn to YouTube first, just because I’ve been keeping up with that the most.

MG: And speaking of your evolution as an artist, how do you think that you have evolved over the last couple of years?

JR: Yeah, so I started in Spokane, Washington. Spokane has such a hip underground scene where there’s such a desire to support local. I was able to start opening up for some cool names and play some really cool venues in Spokane as a really young artist. So I think that gave me a good confidence leap to actually keep pursuing it. And then I came out to Montana, and was split between college and music. I did a lot of coffee shops and stuff just to meet people, but never a lot of recording until I was playing more in Spokane again. And people just kept telling me “you have to have an album.” Okay, so I rushed it. And I also did it myself. And so I was also learning about the production and the recording side of things through that first album, and you can definitely hear how raw it is. And it serves its place, because some people like that really stripped down raw sound, but this one’s a lot more produced and so it’s fun. I was solo in Spokane, came out here solo, then I got the original trio. Getting that drummer helped my sense of timing. Working with another harmony player made me understand melodies a lot better. I also started writing all the bass lines in that trio and then would have someone else play the bass. That helped me to think a little more or less full composition — to not just be in my element of my guitar. So I started learning that with a trio; then with COVID and the trio kind of falling apart, I returned to solo, which was really cool, actually. I’d been working so hard at building the band that my focus was there and then to return to kind of where I started — that was my first realization of how much growth I had made. And I did win the Bozeman’s Choice Solo Artist of 2022, which was a really cool feature!

Also with this album, I recorded the whole thing myself again and I learned a lot with my first album about the recording side of things. With this one, especially doing it three times over now, I really, really learned it. So I think not only just playing my instrument and multiple instruments, and learning to compose — a lot of the live stuff has improved. Also, my computer work side of the music has really improved, too, and the recording side, and the mixing side, and so it just sounds better. It’s more filled out with vocal stacks. Also, now I’m playing the drums and the bass and the guitar, and I was doing some MIDI cello. This project also [involved] more collaboration than I’ve ever done. Even passing off artistic freedom was a learning experience for me, because I’ve always been someone to do everything and control everything and try and make it all my own. But on this album I also just gave artistic freedom to others. I worked with Leslie Fox on cello, she did some beautiful, beautiful additions on a few songs. Alex Platt transformed my songs as a drummer. That was a fun one, too, because I had worked with a (different) drummer for two-and-a-half years already, so I was used to the songs sounding a certain way. I gave him the songs and he just came out of left field with his own ideas and almost rewrote the song with his instrument. At first it was not what I was used to. So I was like, ah, what is this? Then after maybe a week of listening to it, I realized just how much better [it sounded], and what he did for it. So that was another learning experience; just working with more musicians, and [those of] different caliber.

“What I ask is your support to help me release this album the proper way. If we reach my funding goal of $7500, I will be able to pay off the final pieces of studio gear, shoot a single music video, manufacture CDs, as well as internationally distribute this album. Overfunding my campaign will allow me to shoot two professional quality music videos for further promotion, manufacture vinyls, and work in collaboration with a PR firm to help promote the release and a related tour. I work hard to keep costs as low as possible by designing my own artwork, photographing my own content, designing my own website, handcrafting my own merchandise, and learning to record, mix and perform every instrument in my studio. Yet, there is still such a need to ask for help from my community of fans, family, and friends.”

Tickets for the release party can be found on www.jacobrountree.com or via his Kickstarter campaign.

Along with releasing an album and touring through the Pacific Northwest for a week in May (starting in Washington, then making their rounds in Montana), Jacob and his band are also available for festivals, private parties, weddings, and special events. Booking inquiries can be sent to info@Jacobrountree.com.

Keep an eye on Bozeman Magazine’s Event Calendar to catch future performances by Jacob Rountree and his friends!