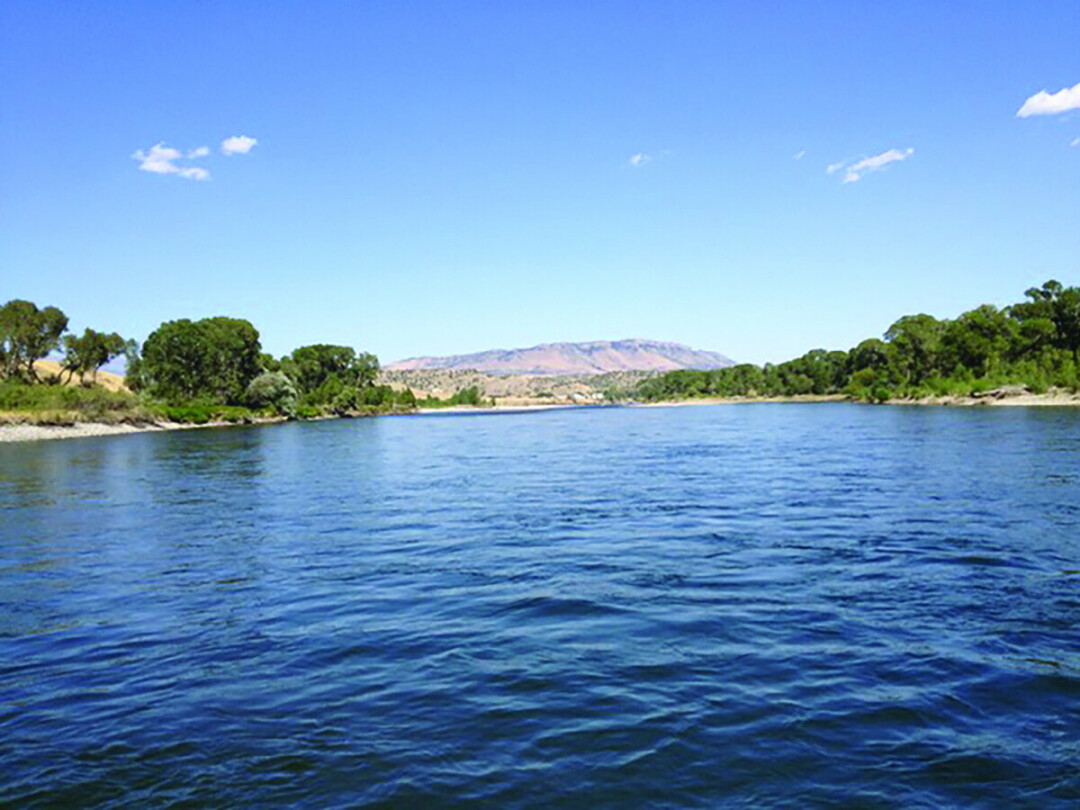 Have you ever wondered how many trout there are in a given stretch of river?

I think about this a lot. I think about it every time I stand beside or float along a river. Whether I am casting a fly or just appreciating the scenery, the thought comes to me; “Hmmm, I wonder how many… .” Of course, there are a number of trout species in a river: Rainbow Trout; Brown Trout; Cutthroat; Golden; Brook Trout; Bull Trout; Dolly Varden, and others, depending on the river. There are whitefish, and even a mixed variation called a Cut-Bow. But how many fish are there total in, say, a mile stretch? Usually, about this time, I also wonder how to find out. What do fish-counters do—put on a mask and snorkel, jump into the river and count every fish they see?

Well, sometimes. I did that once. Some friends and I donned wet suits, masks and snorkels, and jumped in. We floated about two miles downriver to where another friend was waiting with hot coffee, and a car to pick us up. We were not counting the fish we saw, but we sure did see a lot of fish. I was amazed that not one fish bumped into me as I drifted by.

Montana’s Paradise Valley is an idyllic area to fly-fish and wonder about such things. The Yellowstone River flows north out of Yellowstone Park. It is flanked on the eastern side by the Absoroka (pronounced Absorka) Mountains. The setting looks like something out of Lord of the Rings. I always expect to see some Hobbits tramping around. This particular day, my buddy Vince and I were drifting the upper Yellowstone River; I was casting dry-flies for native rainbow and cutthroat trout. I tend to look off into the distance—what we call ‘taking a scenery break,’ searching for Hobbits and elves, or scanning for hawks and eagles and deer alongside the river. At one point, I snagged my fly on a submerged log and lost my rig. Vince dropped the anchor and we sat back and had a cup of coffee and watched the river flow by. As we sipped our coffee, we counted several trout rising to tiny insects downriver from us. Vince tied on a size 18 Purple Haze dry fly. I held it up to the light, appreciating its delicacy and color, and thought about the rising trout, thus prompting the question: “How many trout are in this river? Say, in a mile stretch?”

“Oh, a few thousand or so, depending on the section,” Vince answered. Wow, I thought. I wonder how they figure that out. I was intrigued. So, I looked into how to estimate how many fish are in a river. And it can be a pretty complicated thing to do, full of different techniques, suppositions, fancy terminology and mathematical equations. The kind of mathematical equations that Sheldon might scribble on a chalkboard in The Big Bang Theory.

Now, you may understand what that means, but I didn’t. It is called the Lincoln- Peterson Index, and it is quite complicated.

There are several ways that fish can be counted, such as pool-seining (simply counting fish as they pass through a fish ladder), via a fence or trap, or even by jumping in and keeping track of every fish you see. There is also the scary sounding electro-fishing where, in a nutshell, a section of the river is electrically shocked; the fish are stunned and float to the surface, where they can be counted. They soon revive, shake it off and swim away, probably wondering what the heck just happened. You can read about things like population dynamics, probability sampling, abundance density distribution, and genetic data. Whoa! All I wanted to know was how many trout my fly might float over. 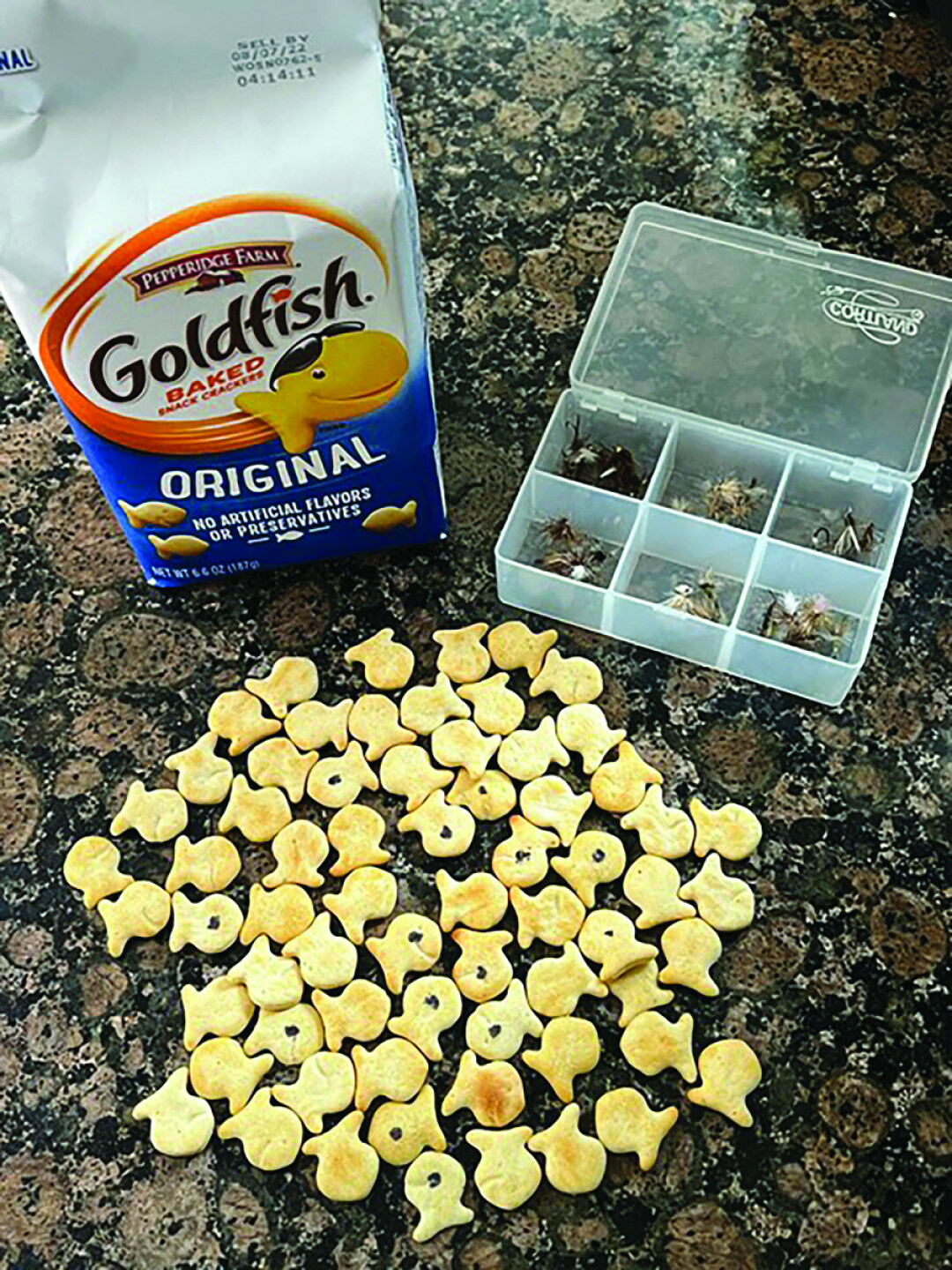 Here is kind of a fun exercise you can do at home to simulate how fish are counted. Go to the grocery store and buy a bag or two of edible Goldfish crackers. You know, the kind you might put in a bowl of clam chowder. But don’t eat them yet. You can eat them after the little experiment (maybe start some clam chowder heating on the stove while doing the experiment). Spread the crackers out on the kitchen counter and count them; then, put them all into a large bowl. Reach into that bowl and scoop out a handful. Count these and put a small, black dot on each, using a magic marker (don’t eat these). Put them back into the bowl and swirl them around, thoroughly mixing them all together. Now reach in and scoop out another handful. Count these and note how many have a small, black dot on them. From this, and using funny looking math calculations like the one above, you can estimate (I know, you already know from previously counting them) how many fish crackers are in the bowl. The bowl represents the river and the Goldfish crackers represent, well, that is pretty obvious. This is a simplified exercise, of course, but it can be applied to real fish in a real river.

All fishermen must wonder about this at one point or another, along with the many other things fly-fishermen wonder about. How deep are the trout? What are they eating today? Do I have any flies that match what they are eating? Where should I cast my fly? Do you think the trout know I’m hungover? What am I doing wrong?

How many fish are in a river can depend on many things. What types of predators are in the area, and what are their numbers? How wide and how fast is the river? Is the river fished heavily? Is it catch and release, or are some of the fish taken home? Disease can be a big factor. Global warming can impact aquatic insect populations; hence, it can impact fish populations. This is just a small list of the many things that can affect trout populations. It is important for the Department of Fish, Wildlife & Parks to know things like this.

Knowing how many fish are in a given stretch of river is not going to help us catch more fish. Knowing how many trout our fly is floating over, especially if we are not catching any, is not going to help us feel any better. In fact, it might lead to more frustration. So I suggest this: wonder is a good thing, so wonder all you want, but spread your wonder a little wider. Wonder about not just the fish in the river, but about the animals around the river, the hawks and the eagles and the osprey, the deer and the antelope. Wonder about the bears and the mountain lions. Are there any elves in those mountains? Wonder about the geologic forces that shaped the river and the landscape. Wonder about man’s search for the meaning of life. Then cast your fly back onto the water.

How many trout are in the river? Ask Sheldon.