The Sweet Pea Festival is a three-day festival of the arts held the first Friday, Saturday, and Sunday in August. The Festival kicks off late Friday afternoon in Lindley Park with a performance by Montana Shakespeare in the Parks; Saturday ramps up with a children’s run and parade that lead the community to the park where the festivities continue through 7:00 p.m. on Sunday. Weekend entertainment comes in many forms – music of all genres, performances by local theatre and dance troupes, workshops, family-friendly entertainment and activities, a flower show, a beer and wine garden featuring Montana microbrews, and over 100 arts and crafts vendors to stroll through and purchase unique gifts for yourself, family, and friends. Find out about the full music lineup here:

DeVotchKa - Denver, CO
Headlining the opening night of music, DeVotchKa brings a cross-pollination of numerous influences, including cabaret, spaghetti Westerns, norteño, punk, and the immigrant dance music of Eastern Europe. This Colorado-based quartet formed in Denver, emerged as unlikely indie heroes in the mid-2000s infusing modern indie music with a global flavor. They found widespread success in 2006 with their Grammy nominated soundtrack to the hit film Little Miss Sunshine. In 2008 they reached #9 on Billboards Heatseekers chart followed up by a world tour featuring stops at Bonnaroo, Lollapoolza and Bumbershoot. Front man Nick Urata has continued doing film scores for such films as Crazy Stupid Love, Paddington, Whiskey Tango Foxtrot and Netflix’s own Series of Unfortunate Events. This will be an incredibly unique opportunity to see one of rock and rolls most eclectic touring acts.

Matt Wallin & His Nervous Breakdown - Bozeman, MT
Growing up just south of the Canadian border in rural North Dakota, Matt Wallin tells stories about the trials and hardships of farm life and oil boomtowns to starting a family and following your own path. Ravens his debut album, paint musical pictures, with writing that reflect the character of Corb Lund, Waylon Jennings and Vic Chestnutt. Songs you can see when you hear them. His music hits on ethereal parts of human life: love, connections, regret all interwoven into the fabric of Ravens.

Kiltro - Denver, CO via Valparaiso, Chile
Kiltro is the brainchild of singer/songwriter Chris Bowers Castillo. Conceived in the lively bohemian port city of Valparaiso, Chile, Kiltro draws much of its thematic energy from Latin-American folk artists making for an emotive and stylistically unique merging of genres. Their debut album Creatures of Habit seamlessly weaves ambient textures with looping guitars, Andean Folk, flashes of shoe gaze and lively percussion. Kiltro has created a fascinating world somewhere between familiar and foreign. A large splash of acoustic picking, a smidge of ambient psychedelia and a dash of groove-worthy funk to get you up and moving.

Kaleta & Super Yamba Band - Brooklyn, New York via Lagos, Nigeria
Brooklyn’s Kaleta & Super Yamba Band are fronted by Afrobeat and Juju veteran Leon Ligan-Majek a.k.a. Kaleta. Kaleta got his start in the late 70s performing in church and was soon picked up by iconic Juju master and world music pioneer King Sunny Ade. A few years later Fela Kuti came calling and Kaleta would go on to tour the world playing guitar for the King of Afrobeat in his storied band Egypt 80 through the 1980s and into the 1990s.

Touring with Super Yamba since 2017 their debut album “Mèdaho” draws on the group’s shared reverence for the raw, psychedelic sounds that captivated Kaleta as a music loving child. The album was included on Bandcamp’s “Best Albums of Summer 2019” list and two of the songs were chosen for the ABC/Hulu series High Fidelity staring Zoe Kravitz. They have performed with a diverse range of artists such as David Byrne, Rubblebucket, Yeasayer and have colloborated with Senegalese griot and talking drum master Mood Mbenge, known best for his work with African pop star Abdou Guite Seck. It’s not often the Northern Rockies get a chance to see an act like this so don’t miss this one!

Black Joe Lewis & The Honeybears - Austin, Texas
Black Joe Lewis & the Honeybears have been laying down some nasty blues and funk since 2007. Esquire magazine had them as a top ten must see band at SXSW in 2009 and that same year saw them touring with Spoon and Okervil River. Their wild performances vaulted them into all the major festivals such as Bonaroo, Wakarusa, Outside Lands, Sasquatch, Coachella, and Bumbershoot. Their 2017 release Backlash saw them hit #3 on Billboards Blues chart and they return recently with their most subversive record to date: an exploration of the sordid trappings of ego, isolation, consumption, waste, and war. Sonically inspired by the Hill Country blues, cowpunk, and the southern soul of Stax, this album charts new territory with a heavy stream of lyrical consciousness. This is The Difference Between Me & You. The Difference is influenced by Lewis’ first decade on the road, embodying a deep repertoire of sounds drawing from the heavy grooves of Albert King, the punked-up blues of R.L. Burnside, and the soulfully layered horns of The Rolling Stones, it was a conscious step in a new direction for Lewis. And yes, in the bar scene of recent Marvel blockbuster The Eternals, that is Black Joe Lewis singing one of his most popular songs, Sugarfoot.

Railroad Earth - Stillwater, New Jersey
For over two decades, Railroad Earth has captivated audiences with gleefully unpredictable live shows and eloquent and elevated studio outputs. And now we get them for our Saturday night main stage headliner! Between selling out hallowed venues such as Red Rocks they’ve launched the longstanding annual Hangtown Music Festival and Hillberry: The Harvest Moon Festival both running for a decade-plus. Beyond tallying tens of millions of streams, the collective have earned widespread critical acclaim from David Fricke of Rolling Stone, American Songwriter, Glide Magazine, and NPR who assured, “Well-versed in rambling around, as you might expect from a band named after a Jack Kerouac poem, the New Jersey-built jam-grass engine Railroad Earth has let no moss grow under its rustic wheels.” This year they recorded their seventh studio album, All for the Song, produced by Anders Osborne behind the board as producer. It might’ve been the gumbo, but the guys seamlessly absorbed the homegrown flavors of the Big Easy by osmosis incorporating horns, blues harmonica and the producers own perspective and guitar playing. ‘It’s no wonder these guys are headlining Bluegrass, Jam and Rock-n-Roll festivals across the country all summer long!

STiLGONE - Bozeman, MT
Kicking things off Sunday are locals STiLGONE who play a unique fusion of genres, spanning funk, soul, hip hop, reggae, psychedelic rock and more. While covering so many styles they manage to create a cohesive sound that is uniquely their own. Their live shows are an immersive trip through detailed soundscapes, and danceable groove. They have opened for such acts as Deltron 3030, Nappy Roots, Kyle Hollingsworth Band, and Michal Menert. In 2021, after a multiple year hiatus, the band reformed and have taken their live performances to yet another interstellar level.

Amanda Platt & The Honeycutters - Asheville, North Carolina
The music of Amanda Anne Platt & The Honeycutters is nuanced, bringing insight and wit to the stories Platt tells through songwriting. Lyrically driven, the band’s country roots music often inspires introspection, whether it be about life on the road, heartache or hope. There is an empathetic and charming wit ingrained in Platt’s songwriting. She has a knack for accessing a deep well of emotion and applying it to her story-telling, whether she is writing from her own experiences or immersing herself into the melody of emotions in another person’s life. They have graced the stage at Vancouver Folk Music Festival, Folk Alliance International, Mountain Stage, AmericanaFest and MerleFest to name a few. In 2016, they were featured on NPR’s World Cafe: Sense of Place Asheville. Amanda has one of those voice that May harken to the younger days of Lucinda Williams and Brandi Carlisle but she truly has something special that is all her own.

Houndmouth - New Albany, Indiana
Houndmouth and their unique mix of Indie Roots Rock and Blues formed in the summer of 2011. They found themselves at SXSW music festival in 2012 and in 2013 their debut album, From the Hills Below the City, was released which led to performances on Letterman, Conan, World Cafe, and several major festivals (ACL, Americana Music Festival, Bonnaroo, Lollapalooza, and Newport Folk Festival). SPIN and Esquire.com named Houndmouth a “must-see” band at Lollapalooza.

On their new album Good For You, a collection of songs set in places as far-flung as the Alamo and the Hudson River, each populated by a motley cast of characters: fairy-tale princesses and vampires, parking-lot lovers and wanna-be beauty queens results in a lovingly gathered catalogue of those wild and fleeting moments that stay lodged in our hearts forever, taking on a dreamlike resonance.

In a departure from the shambolic spirit of past work like Little Neon Limelight (Their 2015 breakout, featuring the platinum-selling “Sedona”), Good For You bears a hi-fi minimalism that beautifully illuminates its finespun storytelling. Fresh off a sold-out tour playing with Rainbow Kitten Surprise this is yet another Sweet Pea performance you will look back upon and say, ‘I saw them back before they were huge!’ Definitely, a not-miss performance. 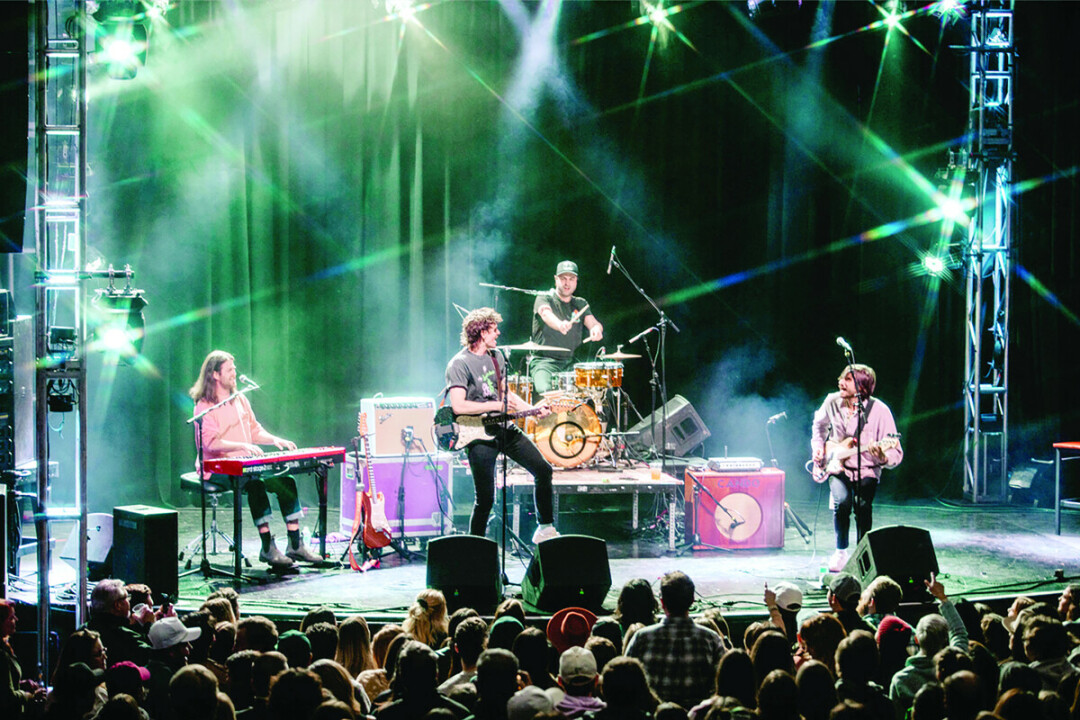 Sweet Pea Festival of the Arts