The Blessings Come Down

Somewhere along Bridger Canyon Road on a steep, gravel driveway in the middle of winter, Adrian Jay and I are about
to die.

Jay, 27, who just the night before was drafting lyrics for one of his demos, is chipping away at a thick layer of ice under the tires of our delivery truck, which — as a result of poor judgment, bad weather and fate — sits just inches away from falling off a cliff. I sit in the driver’s seat with my foot pressed firmly against the brake pedal, hoping that my inaction keeps us from tumbling over the brink. The truck groans.

I met Jay four months ago after moving to Bozeman for school. He was quiet and unobtrusive, but it was apparent that he carried a somberness, an anger with him that felt real and intimidating. As we spent more time with each other, though, I sensed that this persona was attained, not inherent; that his past may have been more fraught than originally expected—that maybe this wasn’t the first time Jay had found himself standing on the brink.

For nearly two hours, Jay has dug for traction and created it by throwing fistfuls of sand around the truck’s four wheels, but now, as the sun begins to dip below the horizon, we realize we have to attempt an escape. “Stand clear!” I yell. “I’m gonna give it a go.” He jumps out of the way and gives me the thumbs up. We hold our breath, cross our fingers and do the one thing we can to liberate ourselves from devastation: floor it. 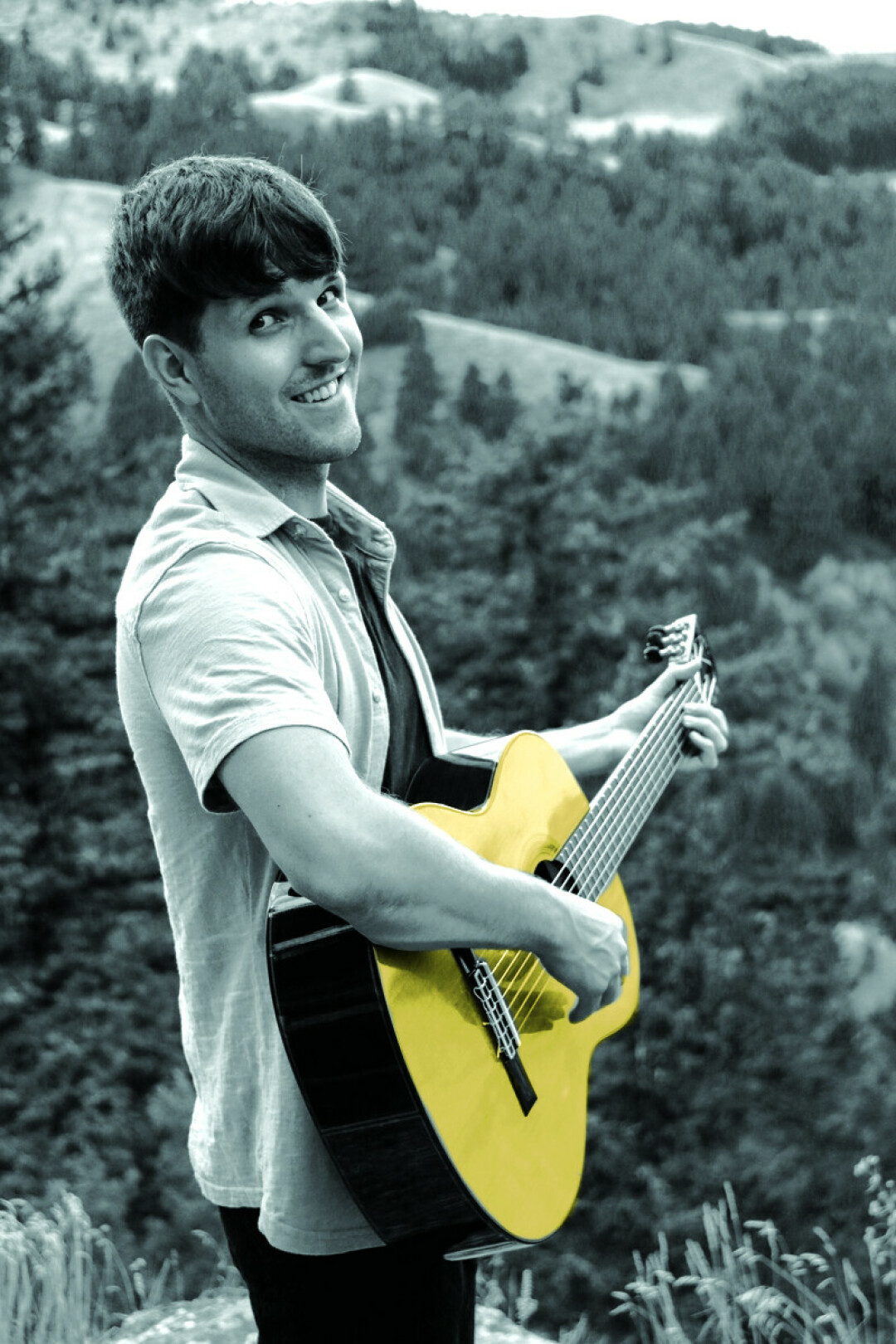 DEMO
“That song was an A+. If you pursue this, I guarantee you will have success.” These are the words Anthony Kiedis, front man of the Red Hot Chili Peppers, said to Jay and his best friend, JD, when they showed him their first demo, Stroboscopic Fantasy.

It was summertime at JD’s annual family trip to Lake Michigan. The two had been planning to show Kiedis their demos from the moment they arrived, but Jay was nervous. To JD, Kiedis was the cool, famous uncle, but to Jay, the singer represented a way of life, an ideal he was destined to reach.

“This guy was my hero,” Jay told me. “I did everything I could to try to be just like him for better, and very much for worse. When I read his book, Scar Tissue, back when I was a freshman in high school, that book essentially became my guide. And, I don’t think this was necessarily intentional on Anthony’s part, but as a young kid with no guidance, you might take away from that book that you can do whatever you want. There will be consequences, sure, but it’s okay, because you are going to be successful beyond your wildest dreams.” So, when Kiedes told Jay and JD that success was certain, everything changed. “I felt like anything was possible,” Jay remembers. “Nothing would stop me from becoming whatever or whoever I wanted to be.” For better and for worse.

LOSS
In the years that followed, Jay lived the life he knew he was supposed to live, with all the swagger, ego and intoxicants that came with it.
One night, for example, after their run-down apartment (affectionately dubbed ‘the Trap House’) was robbed, he and his friends descended into a drug-fueled frenzy, and destroyed what remained of their home. Everything was fair game.

In his blog, Jay wrote, “All I remember is that I was overcome with such a wave of animalistic violence that I became afraid of myself… I woke up sometime the following afternoon, and the first thought I had was, ‘I don’t care about anything.’ It would be a long time until I shook that feeling off.”

While this night of debauchery and madness was shocking and morally draining, Jay and his friends’ breaking point came later, after Joe, a core member of the group, died tragically in the fall of 2015. Jay described how Joe’s death became a line of demarcation within the group. “Some of my friends made it their excuse to dive deeper down their paths of destruction, while I and a few others were gently guided somewhere safer,” he wrote.

A dark cloud had descended upon Jay’s life, and despite his family’s emotional support, everything became polluted by loss. The only step that seemed right was a step forward. Little did he know, that step forward, that “somewhere safer” at the time, would end up being a million-dollar beach house in Malibu.

PARADISE
“I just got a message from my uncle!” JD exclaimed over the phone. “He said that if we move to LA we could stay with him while we look for our own place, and that he would introduce us to anyone we wanna talk to!”

The moment of truth. The opportunity of a lifetime. Jay and his best friend were set. Not only was this their ticket to fame, it was their chance to escape, or at least distance themselves from the pervasive grief that cast a shadow over both of their lives. And, in the beginning, California was paradise. Jay and JD would sit on cliffsides and let the cool breeze from the Pacific lull them into bliss. They would wander the streets and watch celebrities go about their daily routines, contemplating and enjoying the affluence of their new life.

From the moment they arrived, Kiedis acted as their de facto band manager, setting up meetings, planning budgets and visualizing festival circuits but, despite these unbelievable circumstances, Jay soon became disenchanted by a feeling that fame itself was an illusion, that the life he sought was meaningless — that maybe the institution that creates fame was, in itself, evil.

“We just had a feeling that there was this pulsating, evil energy around us,” said Jay. “The ground was vibrating with it, and as we became more aware and grew into our religions and politics and thought about having families of our own, we decided we wanted the complete opposite of LA.”

Life in California had anesthetized Jay and many of his bandmates into a state of indifference. As a result, Jay fell into debt, and music slowly became less of a priority for JD. So, they left. They left Kiedis, they left the opulence and they left the ocean — and found themselves right where they wanted to be: someplace completely opposite.

MONTANA
Livingston is a peaceful town. It sits right at the gateway to a place of unfathomable beauty. It’s a good choice if you’re looking to escape the chaos of urban life, but still, Jay found no solace. “I came here with $200 to my name, and I felt like the lowest person in the world,” he said. “I felt so weak, like such a failure, but still hopeful. Still relatively hopeful that maybe this was all part of a plan that was just beyond my knowledge.” He started making a living by delivering flowers around Bozeman until he found his way into my life, delivering mattresses.

For the most part, Jay remained skeptical of the institutions and authority figures that surrounded him in Bozeman. He was cautious, retreating often into the stories of great men like Julius Caesar, Cicero and Anthony Kiedis. Scar Tissue was still present in his life. It was the invisible hand that governed his perception of reality and his music, but that would soon change after meeting Morgan Rawe, his future fiancée, on a delivery run. Strangely enough, the pair first bonded over their mutual love for the Red Hot Chili Peppers, but as time passed by, she helped him realize that the relationship he had with the idea of Kiedis is where a lot of his struggles were rooted.

“Again,” Jay said, “my bible when I was a kid was Scar Tissue, and that’s not his fault, I’m not blaming him for that. But it’s part of the reason I went down a bad path, and now that I look at my past through a more Christian framework, I just see someone who was suffering because of their own selfishness.”

Somewhat unexpectedly, Christianity came as the answer to many of both Rawe and Jay’s struggles. As a result, it led to a dramatic shift in the tone of his music and his life, and served as an escape that was real and earned. “I had been, up until that point, the ultimate taker,” he said, “and I think, by things not working out, this was like God’s way of telling me, ‘Adrian, you need to be a giver’… If all that stuff didn’t happen in the way that it did, I wouldn’t be here now, I wouldn’t have the love of my life, I wouldn’t have the album that I made, I wouldn’t have this new career path and the opportunities ahead of me.”

Jay’s new album, On a Tight Rope, is a distillation of his past and the process of experiencing, confronting and coping with his deepest pains. It’s an intentionally joyful collection of songs that highlights the love he has for everything: Rawe, Bozeman, jazz, God, even Anthony Kiedis. Aside from being a thoughtfully produced and delightful piece of collaboration, the album communicates a message that feels honest, heartfelt and true to the life Jay hopes to lead. It says, “I’m okay.”

So, yes. We did escape that icy hill with our lives and limbs intact. Sure, it took us multiple attempts, and sure, we had to do it backwards. But escaping from the brink is not easy. It forces you to take the unexpected and longer route. It forces you to use the limited resources at your disposal and confront your fears, but once you skirt your way to the bottom of the hill and find yourself on the clean road ahead, there’s nothing to do but celebrate... and, of course, sing.

Check out Adrian’s eight-part blog on trademarkadrianjay.substack.com and listen to On a Tight Rope wherever you get your music.

Matthew Hayden is the Managing Editor of Arts and Entertainment at the Arizona Daily Sun based in Flagstaff. He can be reached at mhayden@azdailysun.com.

Adrian Jay Unveils "I Do", the First Single From…

Adrian Jay to release debut album, On a Tight Rope