If you walked down Bozeman’s Main Street on Christmas Day in 1866, you would witness the opening celebration of the City Hotel. The first formal hotel in Bozeman, it was owned and operated by George and Elmyra Frazier along with their business partner, John M. Bozeman.

The opening celebration, which included a grand ball and a supper, brought people from all over the valley. Most of them had to dance all night, as it was impossible to provide a place for everyone to sleep. It was a cold December night, so no one wanted to travel home until daylight. The City Hotel was a one-and-a-half story wood-frame structure built on Bozeman’s Main Street where the Fechter building (128 E. Main Street) stands today. There was one long room that held 20 bedsteads (lodgers usually brought their own bedding). The upstairs had two rooms, one for John Bozeman and the other for his friend, William Mackenzie. The bedsteads in the hotel were made of pine, as were the dining tables and benches. The Fraziers proudly hung a sign outside the hotel, one of the first signs on Main Street. It read, “City Hotel, G.W.A. Frazier.” 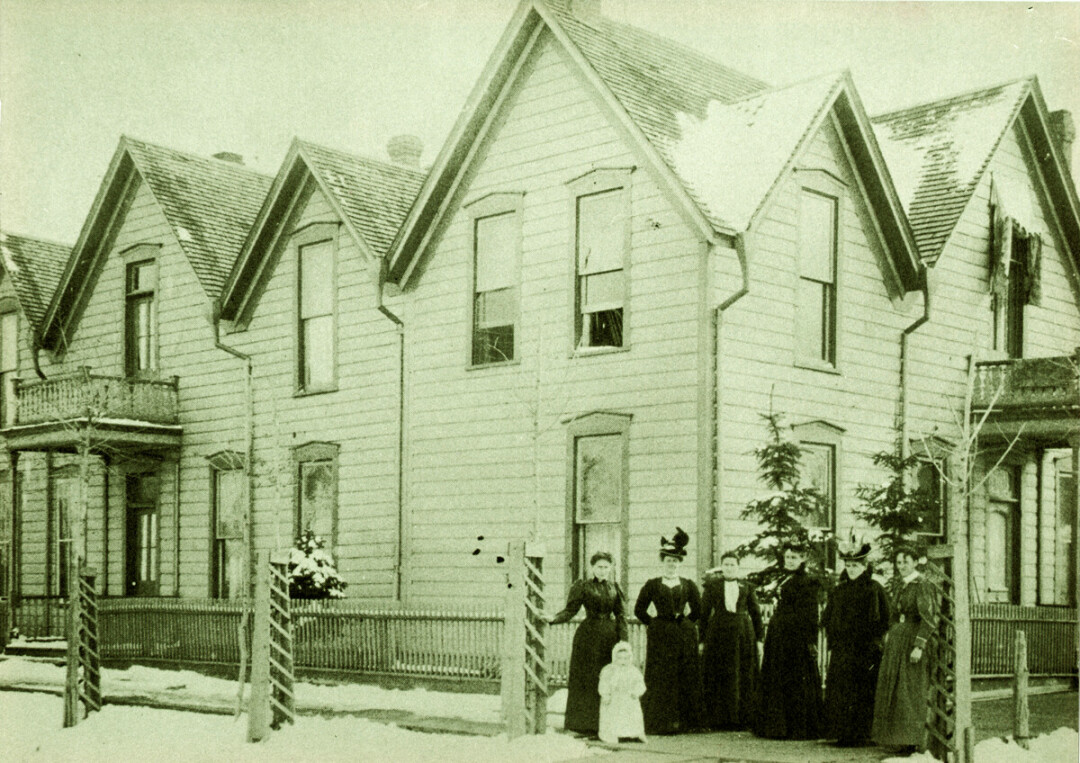 Elmyra and George Frazier, along with their three children Andrew, Billy, and Emma, came to Montana Territory in 1865. They left McLeansboro, Illinois in spring that year, traveling with a wagon train. After a long journey, they arrived in Bannack, where a man had been hanged the night before. Understandably, they decided to keep moving on to Virginia City, where they arrived on September 7, 1865. Approaching the newly formed gold rush town, the family saw a settlement made up of wood shanties intermixed with two-story wood-frame buildings, at least one two-story stone building, and log cabins along a wide main street with boardwalk sidewalks. A few brick buildings were being built, a sign of future permanence for the burgeoning town. The landscape around Virginia City was barren of trees, the hills covered with sagebrush. As the family descended into Virginia City, Elmyra must have wondered what the future held for herself and her children in this territory. Ellen Gordon Fletcher, who arrived in Virginia City just a year after the Frazier family, noted in her diary:

“We reached Virginia City at about noon. I can hardly tell you what my feelings were, or what my impression of the place was as I reached at last that long talked-of, long looked-for place. It certainly did’nt [sic] surprise me with its broad streets and splendid edifices. It looked strange and new to me, and different from anything which I had ever seen before. It is quite a large place, though it does’nt [sic] show off prepossessingly at first sight. The city is situated in a hollow or basin-like, entirely surrounded by mountains, not green and fresh looking, but brown and bare, the numbers of stock in and around the city having eaten all of the grass. There is’nt [sic] a tree in sight. All have been cut down for wood, and all about the city, the ground is cut up by the mining which is constantly going on. All this gives the city at first sight, a rough, bare look. As you enter the city and pass through business streets, it shows to much better advantage. There are some very fine stone buildings, quite stylish and city-like, but mostly small. The streets are narrow and the dwelling houses small, the greater portion of them being built of logs. The outside streets consist entirely of log cabins, some of them the littlest bits of houses I ever saw, and built right into the mountain side.”

While living in Virginia City, George hauled wood for miners and Elmyra helped teach school with her brother, C. A. Heard. After a year in Virginia City, Elmyra and George decided to move to Bozeman in the spring of 1866, most likely due to reports of the fertile Gallatin Valley and farming possibilities. 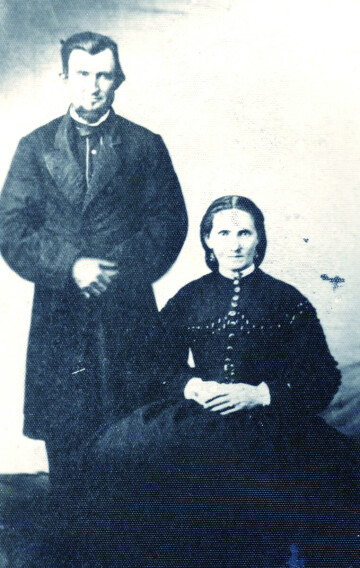 Before moving from Virginia City, George Frazier had met John Bozeman, a young entrepreneur who was interested in transportation routes into Montana Territory. George and John went into business in the town of Bozeman by building the City Hotel. John Bozeman eventually signed over his interest in the hotel to the Fraziers in exchange for room and board. In April of 1867, John Bozeman met his end just east of present-day Livingston when he was shot to death. His murder remains a mystery to this day. Before he left on that fateful trip, John Bozeman left his pocket watch with Elmyra, asking her to send it to his mother if anything happened to him. Elmyra tried to honor his wish, but the administrator of Bozeman’s estate refused to give her the watch. The watch resides within the collections of the Museum of the Rockies today.

The Fraziers sold the City Hotel to Lizzie Williams, an African American woman from Kentucky, in 1869. Williams was known for her cooking, and operated a restaurant and hotel within the building until her death in 1875. This building was demolished in 1917, making way for the Fechter building, designed by Fred Willson and built in 1918.

In 1871, Elmyra gave birth to another daughter, Irena, in Illinois—probably going to her family home for help with her labor and delivery. In 1872, the Fraziers filed for a 160-acre homestead on land that now resides within the city of Bozeman, but at that time was outside of town. Their property was located between Babcock Street to the north, College Street to the south, 15th Street to the east and 23rd to the west.

The mid 1870s were traumatic for the family. George Frazier died of spinal meningitis on February 26, 1874, and son Andrew Frazier was murdered by Jack Schuster in August of 1875. Schuster had quarreled with William Mackenzie and went out to the Frazier ranch to exact revenge, but, instead of killing Mackenzie, he killed Andrew Frazier and George Haverstock. With the loss of George and Andrew within two years, Elmyra was unable to prove up on the homestead and lost it in 1880. 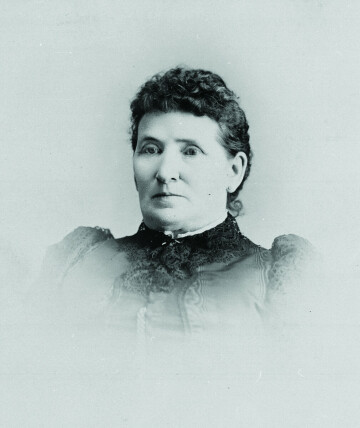 In 1881, Elmyra moved back to Bozeman and opened the Frazier House on the corner of Mendenhall and Bozeman Avenue. This was a large boarding house where people could lodge and take meals for a few days or weeks at a time. The room rate was $2.50/day to $3.25/day. The house had a double parlor where salesmen could set up and show their wares. The dining room, where up to sixty boarders were served at one meal, overlooked a spacious lawn. The house was located next to Bozeman’s red-light district, but the Frazier House was a respectable establishment with no bar or hurdy-gurdy girls.

The Frazier House became a popular stopping place for businessmen, families, and individuals traveling through Bozeman. The hotel register from the late 1890s lists lodgers from Chicago, Portland, St. Paul, Cincinnati, San Francisco, Brooklyn, Helena, Miles City, Missoula, Anaconda, and Butte, just to name a few places. The boarding house was a staple of downtown Bozeman until the 1920s when it fell into disrepair, most likely due to Elmyra’s advanced age. After the closure of the house, the family continued to reside in the building until Elmyra died in 1928 at the age of 92. After Elmyra’s death, her son William lived in the house until his death in July of 1945 at the age of 90.

The house and all its contents, including antiques Elmyra had brought with her from Illinois, were put up for auction on August 12, 1945. The last item on the auction block was the house itself. The auctioneer started the bidding at $350 and it sold for $375. The house was torn down that same year and used for construction material at the Mt. Ellis Academy east of Bozeman.

The Frazier family contributed much to the building of Bozeman, especially Elmyra and her noted hospitality at both the City Hotel and the Frazier House. If you have a chance this holiday season, take a minute to pause and reflect on those who came before. And if you’re downtown during the Christmas Stroll, or shopping on a snowy December evening, stop in front of the Fechter building and imagine a one-and-a-half story wood-frame building in front of you, with candlelight glowing inside and people whirling to a waltz, a polka, or a Virginia Reel. When the door opens, you can smell the scent of pine from the evergreens decorating the hotel inside. You may also get a whiff of the celebratory supper which may have consisted of oyster soup, baked trout, jellies, wild game, duck, candies, puddings and pies, sparkling wines, and eggnog. Imagine the women in fine dresses and men in their Sunday best, dancing and socializing in the new hotel. As you look up, you see a sign that says, “City Hotel, G. W. A. Frazier.” You may see Elmyra hosting, along with husband George. And if you look closely, you may even get a glimpse of John Bozeman himself.

Happy holidays from all of us at The Extreme History Project. We hope you enjoy Bozeman during the holiday season, both past and present.

Julia Martin And Her Generosity of Spirit