Take a Journey to the “West Side” 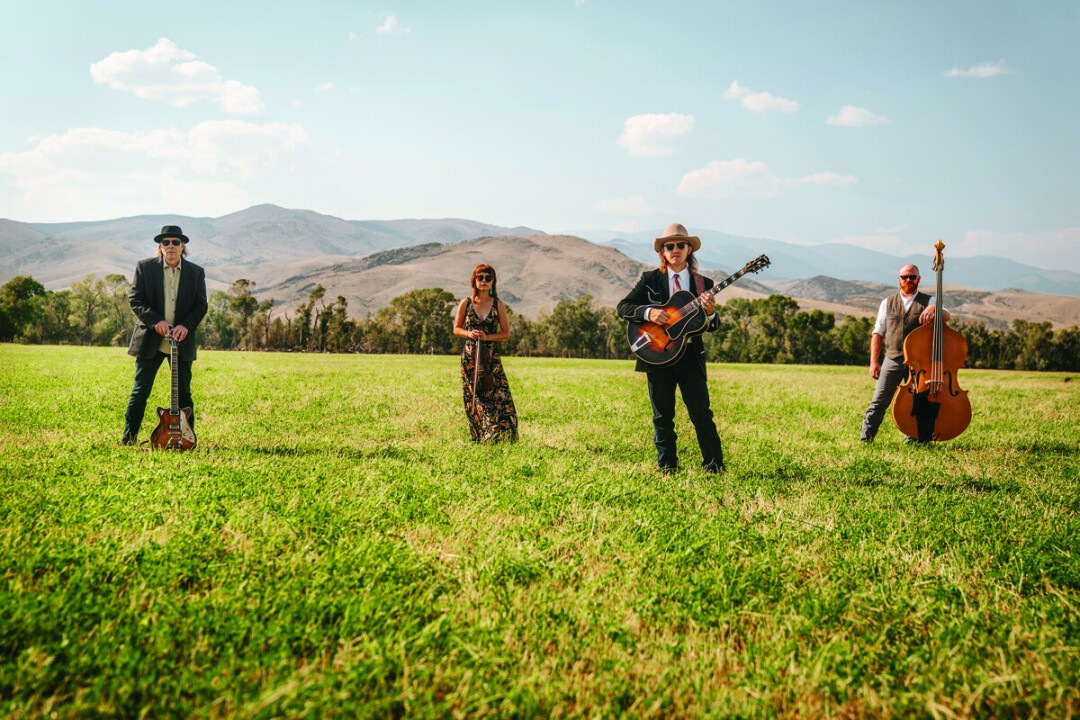 If there’s any one thing Western music seems to require as a barrier to entry, it’s authenticity, and Sam Platts & The Plainsmen have it in droves. Having spent the last decade honing their craft on the live circuit and quite literally living the oft-romanticized “Western lifestyle” outside of music prior to that, this Montana-based outfit’s commitment to their art form is undeniable. Led by husband-and-wife duo Sam and Lilly Platts, fifth-generation residents of the region — Wyoming and Montana, respectively — with their ancestral roots in homesteading, The Plainsmen’s new album West Side is a product of the years spent perfecting their sound and vision.

Tracked live over the course of just a few days in an effort to capture an energy similar to early recordings in the genre, West Side evokes poetic, story-song imagery and intentional lack of traditional percussion — archtop guitar and upright bass carry the backbeat throughout the record, complemented by razor-sharp fiddle work and Sam’s rich baritone vocal delivery. Western swing is known for its infectious rhythms and catchy melodies blended with clever wordplay, and The Plainsmen are masters of the craft.

Lyrically, the album paints a picture of the American west that is both beautiful and gritty. Sam’s songwriting draws on his experiences growing up in small-town Wyoming and a veritable lifetime on the road performing music adjacent to the area’s ranching economy. From the Guthrie-esque working class anthem “If You Haven’t Met The Wolf” to the impressionistic yet sobering realities of “Canadian Line” and the album’s title track, these songs are sure to resonate with anyone who has ever yearned for — or lived within — the wide open spaces of the west. Public domain tunes “Whoopee Ti Yi Yo” and “Saint James Infirmary Blues” also appear on the record, nodding to the ever-present importance of keeping the oral tradition alive in Western music.

This music has been in the group’s veins for a lifetime, with Sam growing up working in his father’s custom guitar shop and Lilly performing Texas-style fiddle from an early age. Sam cut his teeth on stage as a guitarist with Wylie and the Wild West, traveling with namesake Wylie Gustafson’s group across the globe for several years before breaking off to front his own band in the greater Bozeman, Montana area. It was here that he met Lilly, who began her stint with the band as a fill-in player. They began dating a few years later, and the rest is, as they say, history — they were (fittingly) married at the Elko, Nevada courthouse while in town for the National Cowboy Poetry Gathering.

While the rolling plains and vistas of their home region may be easy to romanticize and lazily conflated with “cowboy music,” the group wants to be clear: they are making music steeped in the culture of their region, but there’s simply more to it than the played-out Yellowstone imagery of Stetson hats and rodeos.

“It’s a nuanced thing that can be hard to explain to people who are removed from the west and agriculture, but we identify the most as westerners,” Lilly notes of the band’s identity. “The way we were all raised and our ancestry are strongly connected to the west, which is not the same as the ‘cowboy’ thing. That directly translates to the music we play. Western swing isn’t necessarily cowboy music. There is crossover, but it’s more of a cultural thing. We are really proud of our roots and involvement in agriculture, but we are not trying to ride on that exclusively.”

West Side has been a long time coming, despite being recorded swiftly when it was time to put tracks to tape. Sam and Lilly have been playing together for nearly a decade now, but the band has gone through several iterations in that time — often enough that it delayed their efforts in properly releasing new material.

“We spent many years trying to figure out exactly what this band should be,” Sam recalls. “It used to be a lot more electric guitars and bass, had drums, etc. We spent some time with our friend Joey McKenzie (The Quebe Sisters, The Western Flyers) during the pandemic, and he basically told us that a five piece country western band probably wasn’t going to get us where we wanted to go.”

That advice proved to be a eureka moment for the band in their search for sonic identity.
“We both have always loved western swing,” Lilly continues. “A lot of what Sam writes really fits in that pocket.”

It simply made sense — Sam dropped the electric guitars for the humble-yet-capable archtop, J (Kane, bassist) transitioned to playing upright bass exclusively, and local jazz guitarist Bill Dwyer joined the fray several months later, intrigued by the project’s new direction (and to satisfy some stubborn venue owners who wanted more than a three-piece band). Dwyer is now a full-time member, as luck would have it. Everything seemed to fall into place, and the group set out to record West Side not long after (with Dwyer handling production duties, no less).

The resulting output from Sam Platts & The Plainsmen is a remarkable renaissance for a group that has certainly found their footing after years of grinding in pursuit of just that. West Side is as throwback as it is timeless, awash in an undeniable authenticity born from the generations of personally-lived experiences as well as the experiences of the homesteaders and ranchers who came before them. It’s a triumphant new chapter in the band’s story, and one that will take listeners along on the journey.