Lost Sounds Montana is excited to announce the release of their latest compilation of archival Montana music:

Without Warning is an overview, compiling over the course of 24 tracks more than a decade’s worth of previously unknown music that was inspired by several distinct musical developments—New Wave reaching the American masses; Punk morphing into Hardcore; Postpunk emerging from the formal break with both Rock and Punk; and the post-1985 shift toward a more commercially-viable notion of Indie Rock.

This album is available in Bozeman at The Wax Museum, and Cactus Records, and online at the Lost Sounds Montana Bandcamp.

Lost Sounds Montana’s mission is to preserve, archive, showcase and make accessible the music and associated history of Montana across the decades. Without Warning is our third release and our second double LP compilation. Our first compilation project chronicled 1960s Montana garage bands.

All proceeds help us further our mission and allow for us to continue releasing forgotten and under-appreciated music from Montana’s analog era. 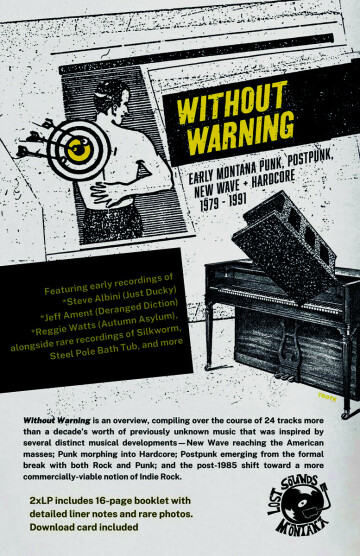