When you first walk through Tanoshii’s doors on Main Street, you’re greeted by a comfortable ambiance and an intimate space decorated with eye-catching artwork. As the winter progresses, this izakaya-inspired, Montana comfort food spot is the place to visit to warm up during these snowy months. At Tanoshii, you can find dishes like ramen, noodle bowls, Japanese curry, a happy hour special of a hand roll and a beer, mochi donuts, and even a new take on chicken and waffles. With a menu that is always rotating, each visit will bring new flavors and combinations. Over a few bites at the restaurant’s bar, Tanoshii’s owner, Daniel Wendell, sat down with me to share his vision and insight into the restaurant’s culinary creativity.

Taylor Owens: How was Tanoshii conceptualized?

Daniel Wendell: The restaurant was actually dictated by the space. I had been looking at multiple spaces for some time. Numerous places either just didn’t seem right or didn’t feel right. When I walked in here, the long narrowness reminded me of when I used to live in the Bay Area and San Francisco and see little ramen places. So the kind of space dictated the idea. We do a lot of Japanese food and we had a lot of fun developing some things, especially working with allergens. We came up with a bunch of recipes based on Japanese food, but which use other ingredients to stay away from allergens. I purchased the existing business in November 2019; then the pandemic hit, so we sat on it for 16 months. We had started, did all this stuff, and then had to shut it down because nobody really had any idea what was going to happen. It was kind of nice, because it gave us plenty of time to develop it. We used the pandemic to come up with and refine a lot of the recipes, and we did it as to-go’s and pickups. Then we opened in April 2021.

TO: What would you like people to experience when they walk through the doors?

DW: The greatest asset we have here is our team. Austin, David and Sam are also managing partners. We decided to make them managing partners so that they have ownership over what they’re doing here. We just really pride ourselves on the people aspect, and the experience. We have tons of vegan food and it’s all gluten-free, and a lot of it is allergen-free. 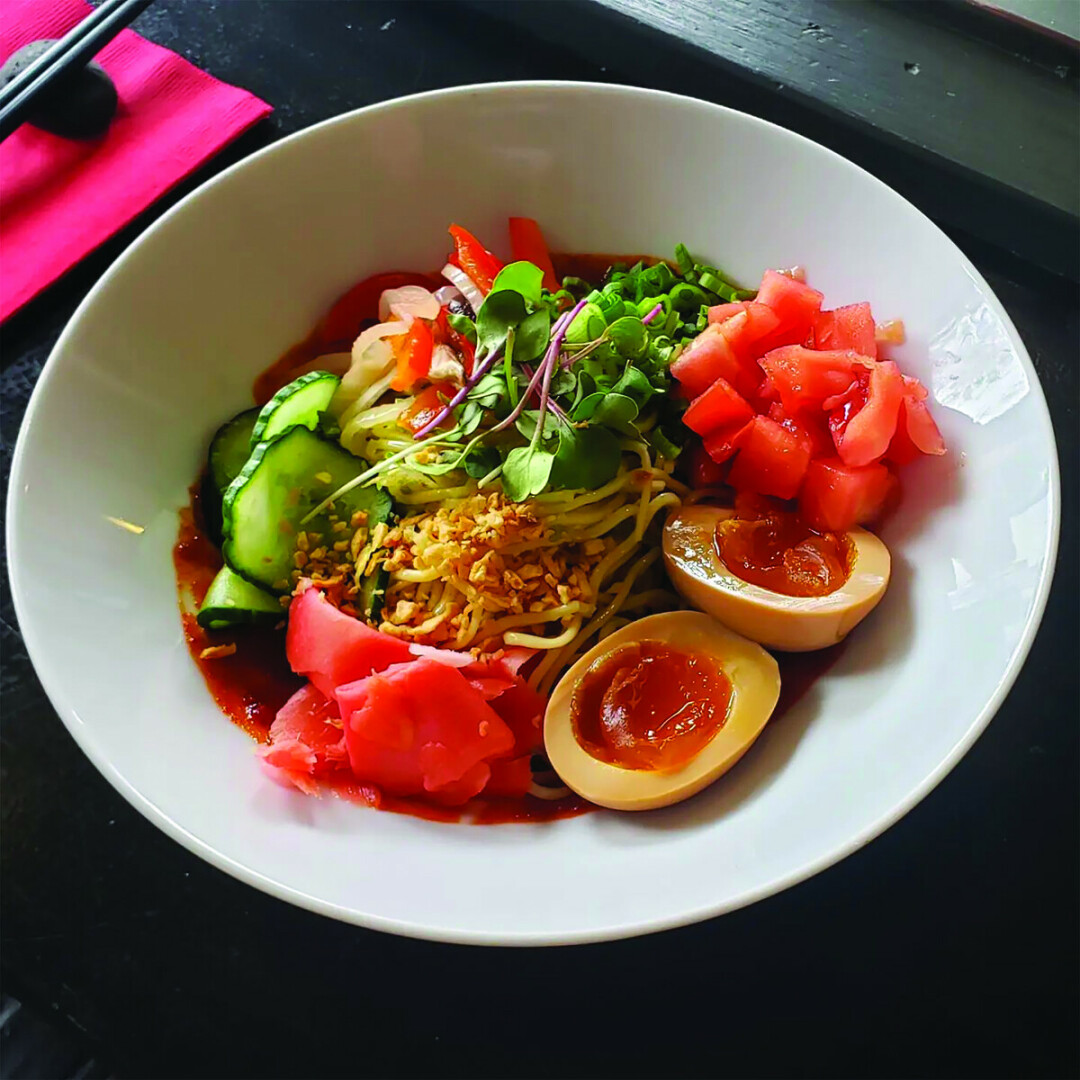 TO: What do regulars keep coming back for?

DW: I think regulars now look at the specials. Obviously, ramen is the main thing. People think of us as a ramen restaurant, but we’re way more than a ramen restaurant. We fly in fish, and we want to be able to make sure that what we have is the freshest and best that we can bring in. We fly it all in from L.A. and through Japan. It’s always rotating.

DW: You know, that is a very difficult question, so I’m going to pick one thing. I don’t think I’ve actually ever ordered it, but it’s my favorite menu item, only because it is so unique. It’s kind of a signature dish; it would be the chicken and waffles. That was a brainchild of all of us. We were making okonomiyaki cakes and they’re usually done in an egg pan. So, it’s like a pancake. We wondered one day, “Do you think we can make this in a waffle machine?” We threw it in a waffle maker and thought, “Oh my gosh, that came out crispier and better.” We always make karaage, which is a traditional type of Japanese fried chicken. Well, then we put the two together. We just came up with chicken and waffles that no one in the world has ever come up with, and it’s amazing.

TO: What would you say makes you unique in the Bozeman food scene?

DW: I don’t think anybody does food like we do, which is unique and doesn’t mean we’re better than somebody else. We’re just our own thing. The fact that we focus on seasonal, fresh, local, sustainable ingredients as much as possible. I mean, it’s cold here. We were growing all our own microgreens, especially herbs, and that stopped for a little this summer, but we’re starting it back up. They are actually grown at my other place, the Food Studio. We source as much local stuff as we can, and we really take pride in that. So we’re a locally-sourced, sustainable practice here, and I just think that’s super important, and really sets us aside. I think the experience is what’s most important to us. That means the quality of food, quality of service, and then, just the atmosphere. I think the atmosphere is a lot of fun. 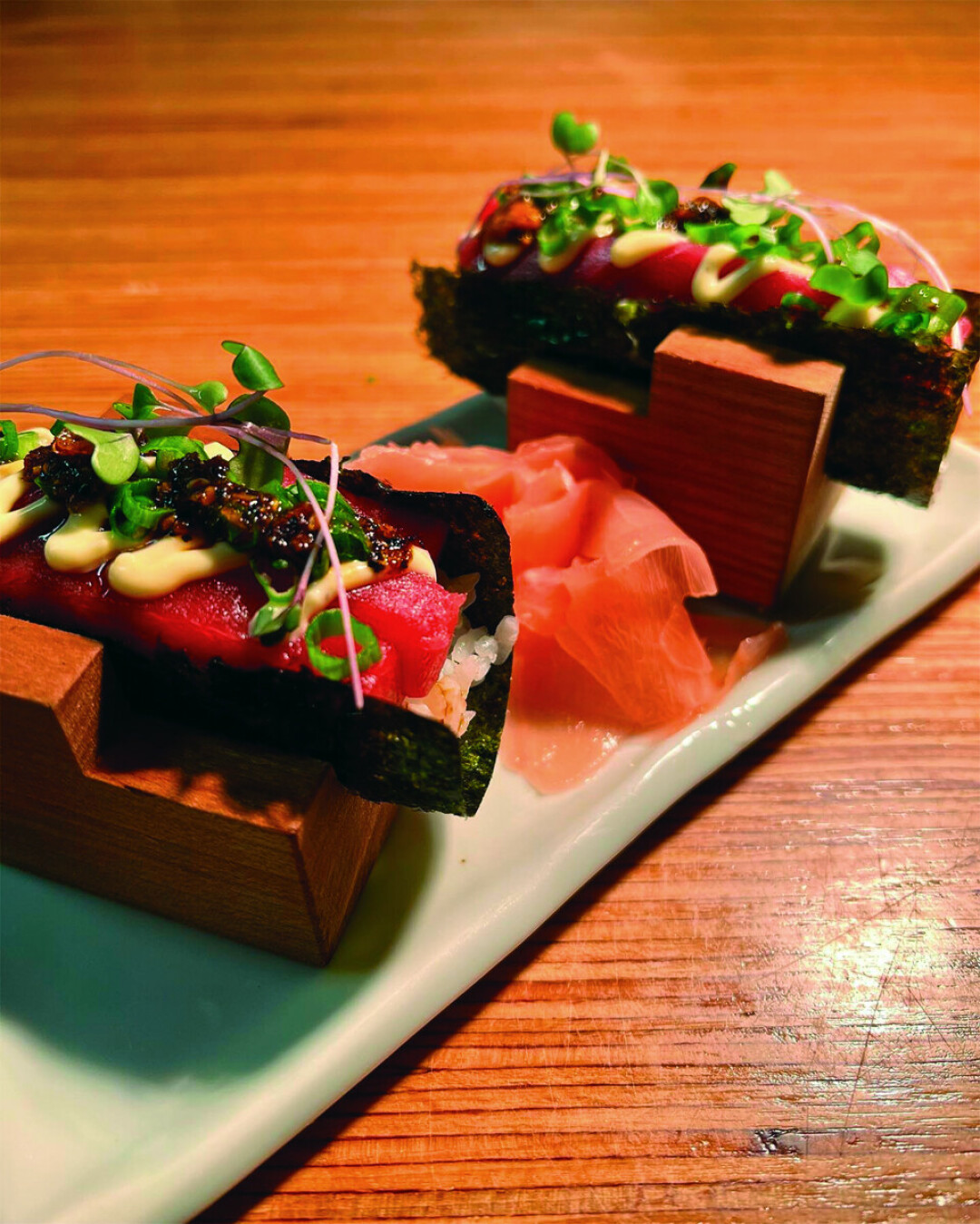 TO: What do you personally enjoy about being part of the Bozeman community?

DW: I’ve been in Bozeman for 23 years now, and I’ve been a chef for way too long. I have run many restaurants, but I’ve never owned one, so it’s just being part of this community. I hear from people a lot that they like it because they can bring their kids here. It’s not a kid’s place at all, but there is kids’ food here. So it adapts to both, you know, and I think it’s just a really neat spot to be able to fit almost any bill. Say you’re eating with a person who is vegan. Everybody can eat here. If you [go] into a restaurant and say, “Oh I don’t eat meat and I am a vegan,” they’ll give you a big hunk of cauliflower. They sear it in the pan, stick it out, and that’s your dinner, right? There are many things you can have here, and even if there is something that doesn’t necessarily fit into your diet, we’ll work through it and help you out in the kitchen. So I think that’s the other thing that makes us unique and different from anybody else. It doesn’t matter if you’re Whole 30, keto, or vegan, we have something for everybody here.

TO: Do you have anything coming up that you would like readers to know about?

DW: We’re constantly changing the menu. We’re trying to do a remodel in the spring and open up this space a little. Storage is very limited, so we’re trying to change that. During the summer, we do a lot of cold dishes and things like that. By this summer, we’re hoping to have this new room set up so we can do more fish and more sustainable stuff… kind of expand what we do as much as we can. Right now, the restaurant only seats 32 people. When we have the patio in the summer it seats 44, but that’s it. We are starting to take reservations for parties of six or more, which we have never done before. That starts this month. We’re doing our happy hours, where you get a hand roll and a beer. I mean, we just want to be a part of this community and stay in the community. We’re just hoping to be able to maintain the kind of drive we’ve had so far. I think we have a really good reputation. I think these guys have done a great job. I wrote all the recipes, designed everything. I did all the interior design. I did all the construction here. I was a general contractor while running other businesses. And so, a lot of my heart is here.

Top 10 Places For Soup in Bozeman