“This is the first day, the beginning of the next chapter for me, where child sexual abuse isn’t at the primary focus of my existence,” said Neulinger, who was headed out to a rural Montana stream near his home rather than hopping on 34 airplanes for a six-week, 12-city speaker’s tour advocating for children’s victim rights.

Neulinger, 30, has worked for seven years, since he graduated from the MSU School of Film and Photography, to bring his story of surviving childhood sexual abuse to life.

He also directed the film, which Esquire magazine called one of the best films of 2020 and a Rogerebert.com review predicted “will have a transformative impact on countless lives.” But “Rewind” is not for children. The film details Neulinger’s own harrowing story of sexual abuse and the angels, as well as the monsters, of his childhood.

Even though the COVID-19 pandemic ended a speaking tour that was to build on the debut, Neulinger’s phone has been ringing off the hook since the film aired on Independent Lens nationally a few weeks ago. “Rewind” is available to view for free until June 10 on the national PBS Independent Lens website and is also available on several video on demand sites.

And while nearly all the film revisits his childhood growing up in suburban Philadelphia, the documentary, as well as its creator, came to maturity in Montana, Neulinger said.

“It is kind of incredible how supportive the MSU filmmaking community has been,” Neulinger said. “(The film) was a big MSU rally, is what basically happened. It is special that a film that is this personal and timely, and that has received so much praise internationally, was made here in Montana.”

Neulinger has literally grown up with a camera. Early scenes in the documentary begin moments after he was born. His father, Henry Nevison, now a historical documentarian, arrived a bit late to the hospital because he was purchasing a video camera to film the occasion. From that moment, Neulinger’s life unspools in home movies, beginning with scenes of a radiant little boy with bright, chocolate-drop eyes.

But young Sasha changes. He becomes aggressive, angry, then clearly troubled. He is referred to a therapist, and as the film progresses, viewers see a family pattern of sexual abuse. His father tells viewers that he knew his son’s claims of abuse were true because he had gone through similar abuse when he was a child, a secret he had kept.

Beginning when he was 8, Neulinger’s abusers were prosecuted. The attorneys for his most vicious abuser, an acclaimed cantor in one of Manhattan’s wealthiest synagogues, prolonged the case long enough to bargain a plea to five misdemeanor charges, the least amount of punishment of any of the three accused. Two other abusers confessed. Neulinger was 17 when the court proceedings ended.

Neulinger survives somehow. He officially changes his name (from Alex Nevison) to honor the resiliency and support of his maternal great-grandfather and as a way of claiming redemption from his abusers. Another escape was nature, he recalls now, especially trout fishing, which is how he came to MSU.

“I was looking at film schools in bigger cities, but when I landed on the MSU website and saw the campus surrounded by mountains, it spoke to me,” Neulinger said. He and his mother visited campus, and the late Paul Monaco, then director of MSU’s film program, met with them. 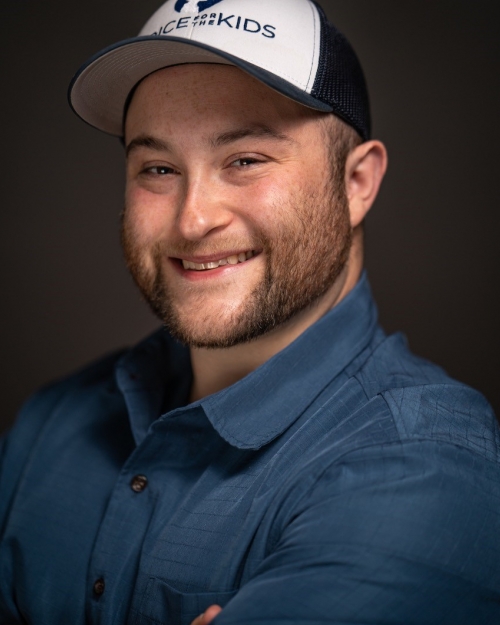 "Rewind," a feature-length documentary about Sasha Joseph Neulinger's personal journey of surviving childhood sexual abuse, made its debut recently on PBS' Independent Lens to rave reviews from several national publications. Neulinger began work on the film shortly after graduating from MSU with a degree in film seven years ago. Much of the production crew have MSU connections. Photo courtesy Neulinger.

“I had a profound connection with him,” Neulinger said. “I remember he told me that what is special about the MSU program is that you can get out of it as much as you are willing to put into it, and we will support you in doing that. MSU was such a positive experience that Montana quickly became my home.”

Neulinger said he was near graduation when he began rethinking his past.

“I still had that self-deprecating voice from unresolved issues from my childhood, and I thought there might be some answers in our home videos,” he said.

“To my surprise, my dad had more than 200 hours of home video dating back to the early 1990s,” which Neulinger retrieved and brought to Bozeman. “I basically logged the first six tapes in (an MSU editing bay). I quickly realized that this was going to be a film.”

Even though he did not have much money, Neulinger did have support from fellow MSU film grads and friends Robert Schneeweis and Jeff Dougherty. They shot a pitch reel, which Neulinger showed to Tom Winston, whom Neulinger met during his internship at Big Sky Youth Empowerment, where Winston served on the board. Winston is a graduate of MSU’s master’s program in Science and Natural History Filmmaking and is the award-winning founder and CEO of Grizzly Creek Films in Bozeman. “We had this MSU connection,” Neulinger said.

Winston said a story in New York magazine about Neulinger’s case revealed the depth and complexity of the story. Long known for award-winning wildlife and conservation filmmaking, Winston offered to team up with Neulinger on the project.

Other MSU friends and filmmakers jumped on board, including Rick Smith and Mike Kasic. MSU graduate Scott Sterling of MontanaPBS, himself an Emmy award-winning filmmaker, served as a mentor and an adviser.

Neulinger gave a TedX Bozeman talk, organized a local crowdfunding campaign and sought private donations. Through the process he became a sought-after speaker about surviving child abuse and launched the nonprofit Voice for the Kids.

“We raised more than $176,000 for the film to continue production, and we were able to go back to Pennsylvania for a three-week shoot,” he said.

Then they ran out of funds. Neulinger feared the project might be dead until MSU film professor Dennis Aig — “another MSU connection” — introduced him to producer Cindy Meehl, who had produced “Buck” and “Unbranded,” other successful documentaries that found wider audiences.

Neulinger said Meehl came on board in about 2017 “with a plethora of experience and resources to finish this film the way we wanted to finish it.

“Cindy just believed in this project and had the connections and resources to get seen by the right people,” he said. “While a big part of making a film is the construction of an effective and compelling narrative, if you don’t have the business side, or exposure to the right people, it doesn’t matter how good your film is. So, I’m extremely grateful for Cindy and Dennis.”

Those interviews of adult Neulinger with the other principals in the story provide perspective on Neulinger’s grace and resilience as an adult. In a final powerful scene Neulinger, closes the door on the empty suburban Philadelphia courtroom where his case was heard 13 years ago. The point of view of the camera then shifts, and a resolute Neulinger is met with the embraces of his Montana friends — Schneeweis, Dougherty, Winston and Smith — a triumphant ending for the difficult story.

“Rewind” was accepted into the juried 2019 Tribeca Film Festival a little more than a year ago, resulting in positive reviews and interest by distributors.

“Ultimately, we chose Independent Lens and PBS so the film could be seen by as many people as possible while being commercial free,” Neulinger said. They also contracted with Film Rise for video on demand rights. The film can be streamed on Apple iTunes, Google Play, Amazon and Microsoft Movies for the next 15 years. Neulinger hopes it will be an important resource of understanding and inspiration for generations of people dealing with abuse.

Sterling of MontanaPBS that he was thrilled when the production team for Rewind chose PBS as their distribution platform to enable the broadest audience.

“I believe they could have sold this film to a big money cable network, but, by going with PBS, this film is now available for free to millions of people that don’t have the luxury of those subscriptions, and likely those who need to see it most,” Sterling said.

For the time being, Neulinger is back home in Montana, fishing, building a house with his wife, training a new rescue puppy, and playing hockey in Bozeman. He said all are keys to his newfound balance as he contemplates his next project.

“I’m extremely proud of this film and what our team was able to accomplish here in Montana,” Neulinger said. “I’m really honored that we have received honors from critics and audiences, but the biggest reward is I have a better relationship with my family now. And I have a much healthier relationship with myself. I am at peace with myself. And that is worth more to me than any positive review or reward.”