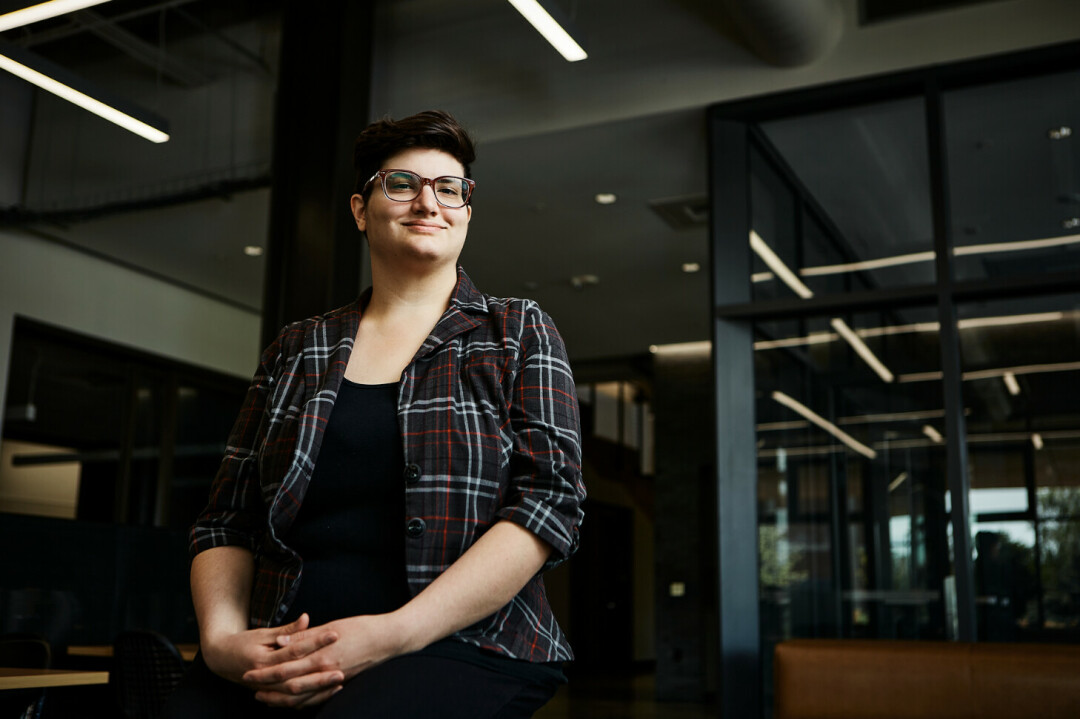 In addition to recognizing the academic achievements of the awardees, the competitive Ford Foundation Fellowship Program — administered by the National Academies of Sciences, Engineering and Medicine — is grounded in a mission to increase diversity on college campuses.

“The Ford expects you to not only do research but to increase the diversity in higher academia, using the diverse human experience to enrich the academic experience,” Molina said. “It speaks to how both my research and my equity and inclusion efforts are valuable. That means a lot to me. Equity and inclusion work has always been a very strong component of who I am as a researcher.”

Molina is one of 26 postdoctoral Ford Fellows for 2021 and the first postdoctoral fellow at MSU. The fellowship includes a $50,000 stipend and an invitation to attend the Conference of Ford Fellows in October. It will support Molina’s ongoing inclusion initiatives and fund a year of astrophysics research with Amy Reines in the Department of Physics in MSU’s College of Letters and Science.

Molina knew they wanted to be an astronomer at age 4, when a visit to NASA’s Johnson Space Center in Houston opened their mind to myriad questions about the universe. But early in their academic career, Molina considered abandoning the dream.

“It wasn’t because I didn’t like astronomy,” Molina said. “It was because I felt isolated and alone.”

As a Mexican American, Molina was met with negative comments and cultural bias from peers as an undergraduate student at Ohio State University. The young university student craved a supportive community within the field, people to engage in conversations about the things they were learning and share in the struggles.

Molina was discouraged and the situation didn’t improve in graduate school. The Sloane scholar was contemplating dropping out of Pennsylvania State University when they reached out to their academic inspiration: their father, David, who grew up in Mexico City and is now chair of the economics department at the University of North Texas. Molina’s father pushed them to find other solutions, both for themself and students who come after.

“If someone leaves because they don’t like astronomy, fine,” Molina said. “But it’s not fine if they leave because they think no one cares.”

Determined to create the space they sought, Molina founded an equity organization at Penn State in 2016. Towards a More Inclusive Astronomy now has four chapters, including one at MSU.

Molina’s research is focused on supermassive black holes in the smallest of galaxies — known as “dwarf” galaxies based on their size. As more is understood about the mechanics of black holes and how they influence their environments, researchers are finding that they are critical to how those galaxies are built and change over the eons, Molina explained.

Black holes are areas of space with such intense gravity that even light is drawn in. Rather than looking for direct visual cues, people who study black holes look for their interactions with objects around them in a sort of reverse logic that Molina said only serves to make them more interesting.

“They’re not like stars; you can’t go and easily pick them out in the night sky,” Molina said. “And yet they are central to how galaxies evolve.”

Molina is conducting a follow-up to confirm the results of Reines’ radio-based study into supermassive black holes, which revealed that many of them were not anchoring the center of their dwarf galaxies as expected. The follow-up relies on visual light data from telescopes, rather than radio waves. Molina is also looking for signs of black holes in dwarf galaxies through other methods, such as visible emission lines.

Matter influenced by the gravity of a black hole forms into what is known as an accretion disk, a swirling flattened spiral of material not unlike the rings of Saturn. Gases around the black hole are bombarded with energy coming from the accretion disc, and electrons are stripped from elements such as iron. Iron 10, for example, has lost nine of its electrons, releasing light in the process which astronomers can observe as an emission line.

According to Molina, only two phenomena in the universe are powerful enough to produce an iron 10 emission line — black holes and exploding stars known as supernova. But only the black holes can sustain that sort of energy.

Molina found this emission line in the first black hole they confirmed from Reines’ findings, then again in a black hole identified in a paper on a dwarf galaxy merger by Erin Kimbro, a post-baccalaureate researcher who received her undergraduate degree in physics from MSU in 2020. Now Molina has more questions to answer about the nature of the emission line and how it relates to black holes in dwarf galaxies.

“Even in massive galaxies with massive black holes, you have a hard time detecting this line,” Molina said. “And yet it was really strong in these two objects. It blew my mind a little bit. It was not something that I would have ever expected.”

In addition to their extensive research, Molina works with the Women+ in Physics group to build mentoring programs and a library of materials for students and meets with prospective students to talk about campus diversity efforts and resources to make sure all students know they have a place at MSU.

“Nobody should feel like they can’t do physics or astronomy because they are not being supported,” Molina said.