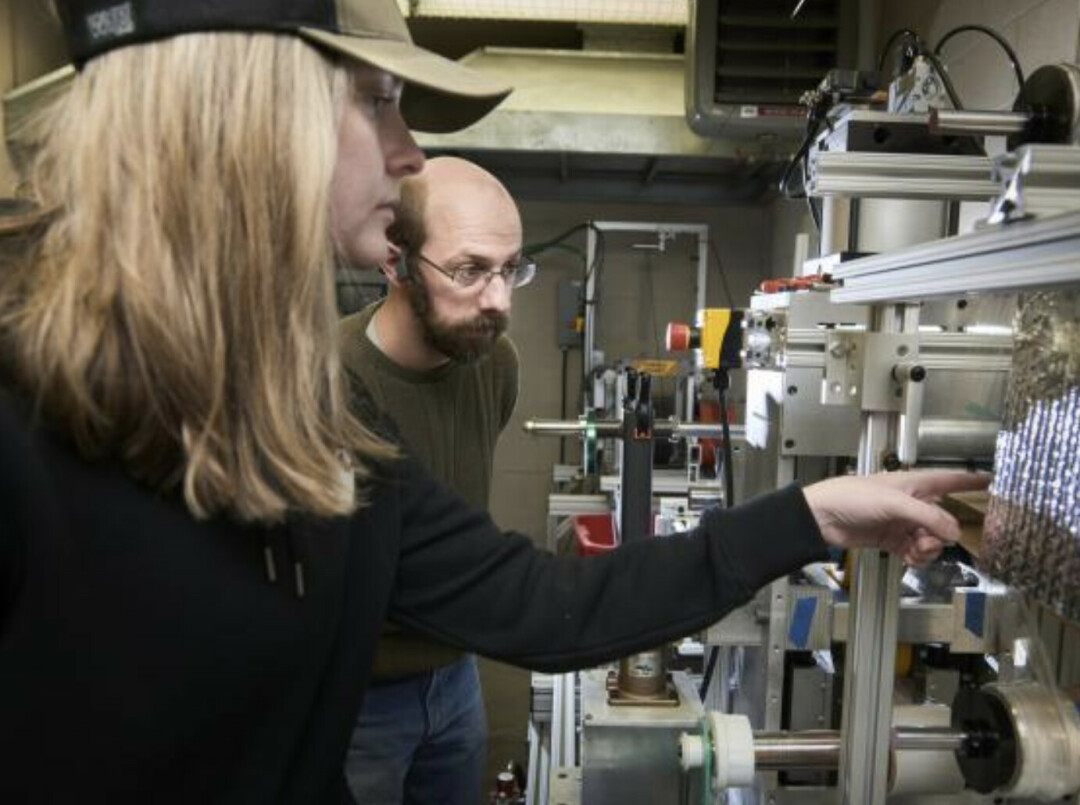 BOZEMAN — The carbon fiber material used to make aircraft lightweight and strong could soon get a major makeover as a result of a Montana State University project that’s rapidly catching the attention of industry.

For the past four years, a team of MSU scientists, students and collaborators has pioneered an innovative way of making “stretch-broken” carbon fibers that are more easily formable to the complex shapes of aircraft and could significantly cut manufacturing costs. The project is funded by a total of $25.8 million in contracts from the U.S. Army.

“We’ve invested a lot into this and now we’re approaching a major milestone where we’ll demonstrate actual manufacturing at a small scale before transferring the technology to industry,” said Douglas Cairns, the lead MSU researcher on the project. “We’re very excited about the potential impact.”

Traditional carbon fiber composite — made by embedding the long fibers, which are stronger than steel, in a hardening resin — is the gold standard in the aerospace industry because it’s exceptionally strong and durable for its weight, explained Cairns. But the fibers are so stiff that forming them into the tight curves of an airplane wing, for instance, requires complex and expensive machinery. It also often requires a scaffold-like metal substructure that’s prone to corrosion, costing the U.S. military billions of dollars each year in maintenance and repairs.

By contrast, MSU’s new carbon fiber material — created by precisely stretching the material so that some of the fibers break at natural weak points — is about eight times more formable while being roughly the same strength, according to Cairns. That means the material can be shaped with simpler equipment and without metal substructure.

"Because it’s so much easier to form, we're conservatively estimating that we can lower the manufacturing costs by a factor of four,” said Cairns, the Lysle A. Wood Distinguished Professor in the Department of Mechanical and Industrial Engineering in MSU’s Norm Asbjornson College of Engineering. “That’s a huge deal.”

Although the concept of breaking carbon fibers to improve their formability has been around for decades, previous methods such as randomly cutting the material proved to significantly compromise strength, said Cairns, who has worked in aerospace materials for nearly 30 years. The idea of stretch-breaking also isn’t new, but until now nobody had figured out a way to consistently and efficiently do it in a way that could be scaled for industry. “The concept is easy, but the control of it is very difficult," Cairns said.

Working with nearly two dozen Montana companies to help with design and machining, the MSU team developed a new kind of stretch-breaking tool called the Bobcat Head. As a flat strand containing thousands of individual carbon fibers is rapidly passed through a series of rollers, precise force is applied to break the fibers where there are nicks and other imperfections. Only about 2% of the fibers are broken across a given area, Cairns noted.

The researchers then studied the properties of the resulting material. Roberta Amendola, associate professor in the mechanical and industrial engineering department, led a team of fellow faculty and students to test how easily the stretch-broken fibers could be bent into complex shapes and set with resin.

“The material keeps surprising us,” Amendola said. “What we’ve confirmed is that it’s as strong as material made with continuous fibers but is very easy to form. It’s a remarkable result.”

The next step, according to Cairns, is to scale up the stretch-breaking machine for a pilot demonstration of how it could be used in actual manufacturing, which would pave the way for licensing the technology to aerospace companies that produce both military and civilian aircraft. There’s the potential for the material to start being used industrially in the next few years, he said.

In the meantime, the work is having an educational impact at MSU, with more than eight undergraduates and a dozen graduate students having contributed to the project, Cairns noted. Other MSU faculty on the project are professor Dilpreet Bajwa and associate professor Cecily Ryan, both in the mechanical and industrial engineering department.

Federal appropriations for the $25.8 million in Army contracts for the project were supported by Montana Sens. Jon Tester and Steve Daines.

“The scientists and engineers at Montana State are consistently at the cutting edge of innovation, and I’m proud to see some of Montana’s brightest minds helping to keep our nation safe through this partnership with the United States Army,” Sen. Tester said. “As Chairman of the Senate Appropriations Subcommittee on Defense, I was happy to help secure funding for this partnership and am confident that MSU’s breakthrough carbon fibers will deliver for our armed services.”

Cairns said the project is already attracting attention from advanced material supply and aerospace companies that have come to the Bozeman campus to see the material for themselves and are eager for material samples, which the MSU team is working toward providing. "When we talk with aerospace companies, their eyes light up,” he said. “They recognize how much this could impact their design and manufacturing."