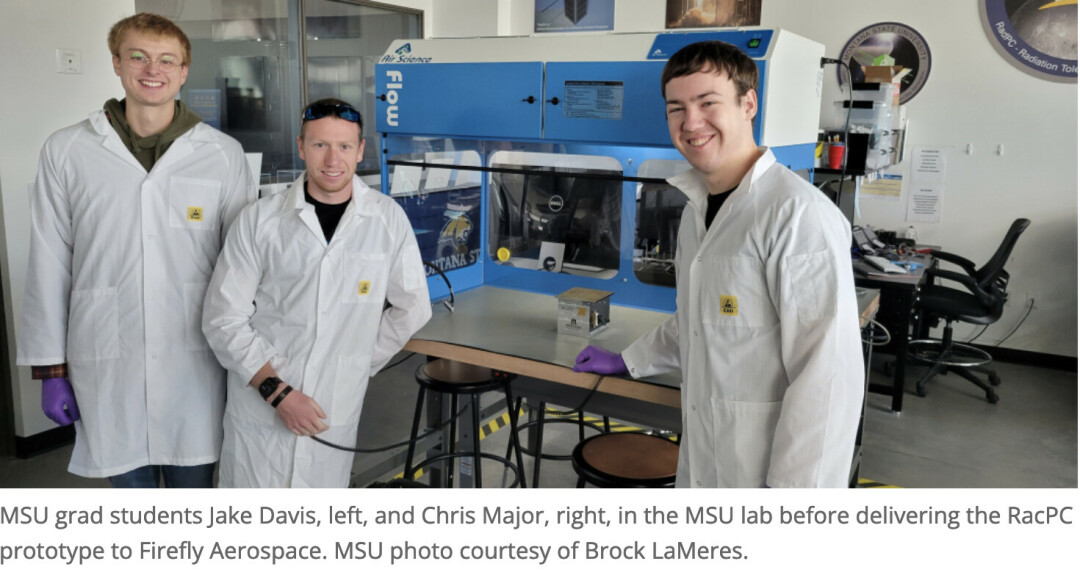 BOZEMAN — When two Montana State University students recently took a flight to Austin, Texas, they had arguably the most unique cargo of all the passengers: a Rubik's Cube-sized computer that's scheduled to land on the moon.

Chris Major and Jake Davis, graduate students in MSU's Norm Asbjornson College of Engineering who have spent years helping to develop the specialized computer called RadPC, delivered the completed prototype on Oct. 19 to Firefly Aerospace's facility where the lunar lander is being readied for the 2024 NASA mission.

“In the airport, a lot of people were tilting their heads to read the big stickers on our suitcase that said 'Warning, sensitive space equipment,'" said Major, who is earning his doctorate in electrical engineering. NASA gave them the stickers to help protect the equipment en route, he explained.

"It was definitely in our carry-on," said Davis, a master's student in mechanical engineering.

The trip was the latest chapter in the decade-long development of RadPC, which was conceived by MSU researcher Brock LaMeres as a new way of coping with radiation in outer space that can disrupt the computers that control satellites and spacecraft.

“This was a huge milestone for the project and also a really unique experience for the students,” said LaMeres, professor in the Department of Electrical and Computer Engineering. He had planned to go on the trip, too, but had to back out unexpectedly, and the students were game for doing it themselves, he said. "More than three years of work was totally dedicated to this moment where these two students delivered a multi-million-dollar experiment to NASA."

RadPC prototypes have been tested on high-altitude balloons reaching the edge of outer space, three times aboard the International Space Station and twice in self-contained satellites orbiting Earth, each time testing the technology's ability to withstand space radiation. In 2019, RadPC was one of 12 science and technology payloads that won a coveted spot to the lunar surface as part of NASA's Commercial Lunar Payload Services program, in which several landers developed by private companies will carry small payloads to the lunar surface. The moon journey will be RadPC’s biggest trial yet, said LaMeres, who recently founded a company, Resilient Computing, to begin commercializing the technology for use in actual space missions.

The onboard computers that control spacecraft are traditionally made with oversized circuitry fashioned from special materials to withstand the high-energy radiation emitted by the sun and other celestial bodies, but that means the devices are more costly and cumbersome, LaMeres explained. In contrast, RadPC uses ordinary computer processors with complex MSU-developed software to create on-the-fly redundancy, allowing computations to continue even if a radiation particle strikes and disrupts the computer's sensitive memory.

From the beginning, students have been instrumental in developing the technology, LaMeres noted. The project has involved more than 62 MSU undergraduates, 17 graduate students and nearly a dozen faculty, including staff engineers in the Space Science and Engineering Laboratory housed in the Department of Physics in MSU's College of Letters and Science.

Davis started working on RadPC as an MSU undergraduate, when, in his junior year, he sought out research opportunities and landed in LaMeres's lab. The project motivated him to pursue a graduate degree at MSU, and his master's thesis has focused on preparing RadPC for the moon mission. He said the trip to Austin felt a bit like a culmination.

"It was pretty cool rolling up to this super nice building and walking through the high-security doors to meet with the Firefly and NASA people," Davis said. In a special clean room in the facility where the lunar lander will be assembled, the students donned gloves and gowns to prevent contamination while taking RadPC out of the suitcase for final testing.

"You get started on this project as a student, but by the end of it you see that you're doing real work that industry respects," Davis said.

"It’s really interesting seeing that industry side when you're a student," added Major, who started working on RadPC as a master's student at MSU and has devoted four years of his doctoral work to the project. "You get to see where you might be in a few years."

The heavy involvement by MSU master's and doctoral students has been crucial to advancing RadPC over the years, according to LaMeres, and the work has offered a rare chance for students to work on such a major project — in many cases seeing a version of RadPC from start to finish for testing on the space station or a satellite.

“It’s a pretty unique student experience," LaMeres said. "And for this part in particular, going to the moon, it’s really special.”

Major agreed. "All the time we spent writing computer code and all that — now there’s a tangible product that's going to the moon," he said. "That’s the fun part.”

“I'm very thankful to have worked on this project," Davis added. "It has been such a rewarding experience.”