I set out from Bozeman late in the afternoon, across the pass east on my way to Zortman, MT to install a thermal solar collector for a Canadian wildlife biologist and his wife who are renovating a home there. There are a few wind turbines off the Interstate on the pass before the town of Livingston, I once heard about a modest wind farm that was begun here, but was removed because of the occasional 100 mph winds flowing downhill from Yellowstone NP.   The blades would strike the tower pole if driven hard enough, causing catastrophic failure and sending debris into nearby residential areas. Paradise Valley is a long chute constraining a flume of heavy, cold air dropping from Yellowstone National Park into a narrow nozzle of sorts at the other end. Just opposite this natural gateway sits Livingston and amazing wind potential, if you can tame it.

North from Big Timber I head into large open spaces between mountain ranges as the sun sets. Deer are feeding everywhere, the temperature is a warm 45 degrees — the equivalent of a cool summer night and it’s January. Occasionally in Montana, there are signs noting animal crossings. More often, you are warned by the people you are going to see (as in this case), or can tell from the large blood stains and drag marks on the road every few miles. The frequency of collisions here appears to be much higher than on roads near Bozeman from the visible evidence. So I’m on my guard, knowing that hitting a deer or antelope at highway speeds can total a vehicle and maybe cause injury. Elk are a more serious matter.

Twilight, and I pass deer bedding down feet from the road only visible in the headlights. Luckily they seem to be staying put. Up ahead, what looks like many radio towers with synchronously flashing red lights turns out to be the first turbine towers of the Judith Gap wind farm. Their huge (126 ft long) ghostly spinning blades are only visible against a dim twilight background to the west. The rest of the five hour journey is pitch black, except for a few towns. People actually live in the windswept area near Judith Gap. Typically, the only signs of life are the neon signs in bar windows, the refuge for the locals from the harsh conditions for many months of the year. Lewistown is the largest in the area, a once wealthy but now sleeping rail town showcasing grand brick and granite buildings along its Main Street. Further on into the darkness, I pass through the Charles M. Russell Wildlife Refuge, guessing what it might look like in the daylight while I look for large game crossing.

Finally, the sign for Zortman. I’m in the middle of nowhere, turning onto a dirt road that goes on for another seven miles into deeper nowhere in the middle of the moonless night. This is one of the least densely populated areas in the lower 48.

Zortman sits in a geological oddity known locally as the “Little Rockies” — a small patch of mountains in the middle of vast, rolling prairie. Apparently there is a huge cave system nearby, comparable to Carlsbad Caverns, which has been closed to protect the bat population. Gold brought people here long ago, but layoffs at the mine have left only about 50 residents eking out a living mostly from the hunters and tourists that pass through seasonally. Dennis, the wildlife biologist, is working to expand the nearby CM Russell Wildlife Refuge and restore native big game, such as genetically pure buffalo and elk, to the prairie. He hopes it will someday rival Yellowstone NP in its herd numbers and range area. The town still hangs on to a General Store (with an amazing selection of gift wrapping paper curiously displayed), a bar, and a greasy spoon diner. It’s the kind of diner where you don’t have private conversations at your table. You’re likely to wander into the lunch hour rush to find a single large unshaven local in overalls and coke-bottle glasses drinking coffee at the counter, who is perhaps ready to converse with anyone – or just stare and listen. I once saw about five or six people in the adjacent bar, which offers the only nightlife in inner-city Zortman. It’s large enough for about 150. It is the off-season, after all. 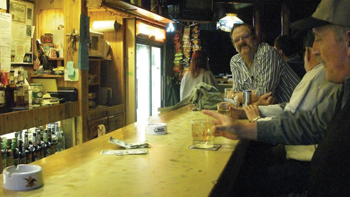 Work keeps me late on my last day there, and I am destined to travel the game-populated backroads in the dark once more. The CMRWR is beautiful in the sunset, but the temperature has dropped to a few below zero (from 45) during the past few days. An icy haze forms as the moisture comes out of the air and freezes. It looks solid and still. I’m almost surprised that I can still travel through it. Suddenly I realize that in my haste to leave, I have forgotten to fill up the gas tank. Zortman is the closest known fuel, but it’s backtracking. It’s not a good idea to run out of gas in below zero temps, but I make some guesstimates and decide to press on. The weather worsens to blowing snow. A diner and gas station is ahead at a crossroad, but no lights. A sign on the door says “Closed for the Season — will reopen summer 2007” — guess they never made it back. I could make a call if the work cell phone would even come on. I chance a look at it while driving through what I assume is a game-free ravine, then glance back up just in time to see a deer trotting down the ravine across the road in front of me. Lesson learned.

The town of Roy made the mileage distance sign, so maybe it has gas. Nothing visible. I keep going, but the gas warning light has been on for a while. There was a store with lights on there. I think to myself, someone will sell me a gallon or two. People tend to be understanding and helpful in these isolated areas. I turn around and ask at the store. Roy Oil and Gas is just right up the road and it’s still open. The lighted sign advertises tires, not gas. In small letters below I make out “oil and g s”, no “a”. The attendant is standing with a customer in below zero temps next to a construction site heater blowing hot air on the frozen diesel fuel pump. The gas pump doesn’t work either. Not good. Finally he finds the problem in a circuit breaker. I put $5 in to get to Lewistown. I hand a bill to the old timer at the counter and he looks at me with baggy cheeks through thick glasses. I’m just a little surprised as the expression “Shiiiiit” rolls out his mouth as his lower lip drops and exposes elongated, aged bottom teeth. “Five dollars? It’s a good thing I stayed open this late – I’m five dollars richer. Now I can go home and get some sleep — I’m tired,” he says slowly as he shuffles over to the register to deposit the sale. Realizing he was having some fun with a “hurrying city type”, I smile and wave him off as I head for the Big City.

As an organic gardener for over 20 years, a student of Environmental Studies, and a Philosopher for life, Joe Jacobs finds it easy to glean wisdom from the living dirt beneath our feet. He’s also a “green tinkerer”, employed for many years in various sustainable building trades.