Every May I charge off somewhere too early for the season. I once loaded a large canoe on top of a small car and drove to Hyalite. The ice fisherman out on the reservoir got a good laugh from that misguided decision. I put my head down and drove the load back to town. At least that trip was unplanned, a whim. It seems that my thought out, planned trips are even worse. It could be that the thought is non-reality based, what I call ‘recliner reconnaissance.’

Last year in early May I drove from Bozeman almost to Canada to hike in the Sweetgrass Hills. What a pleasant sounding lark of a name! Surely there would be gentle slopes, bright wildflowers, glades abuzz with bees, possibly even a soundtrack from the Sound of Music. Well... the Sweetgrass Hills are indeed beautiful, though I did not even see them the first day, since they were sheathed in what turned out to be snow clouds. They are also formidable, and steep. I never set foot upon them, because what was snow on top was heavy rain in my camp below, and the roads became slick gumbo. Still, the trip as a whole was a lot of fun and worth description.

Recently, leaving Bozeman on a beautiful spring morning, I drove north to Helena and beyond, taking the 434 cutoff at Wolf Creek over to Highway 200 leading up to Simms. Being well aware of my weather luck, I did not want to spend all of a great day driving, so had planned a hike on Crown Butte. Rising 900 feet above the plains, this laccolith formation is owned by the Nature Conservancy (thanks to the local ranchers for sharing their roads for access!). The hike is a mile or so along the grassy base, a fairly steep climb up a ravine, and more grassy walking on the vast summit block. Looking out from the cliff edge, the view encompasses high hills, golden plains, and the snowy Rocky Mountain front on the horizon. The upwind ruffled my sweat soaked shirt; moving away from the edge, I jogged back down to the ravine after spotting some blue-grey storm clouds to the northwest. Back at the truck by mid-afternoon, I pointed north once again toward my next destination—the headwaters of the Marias River. 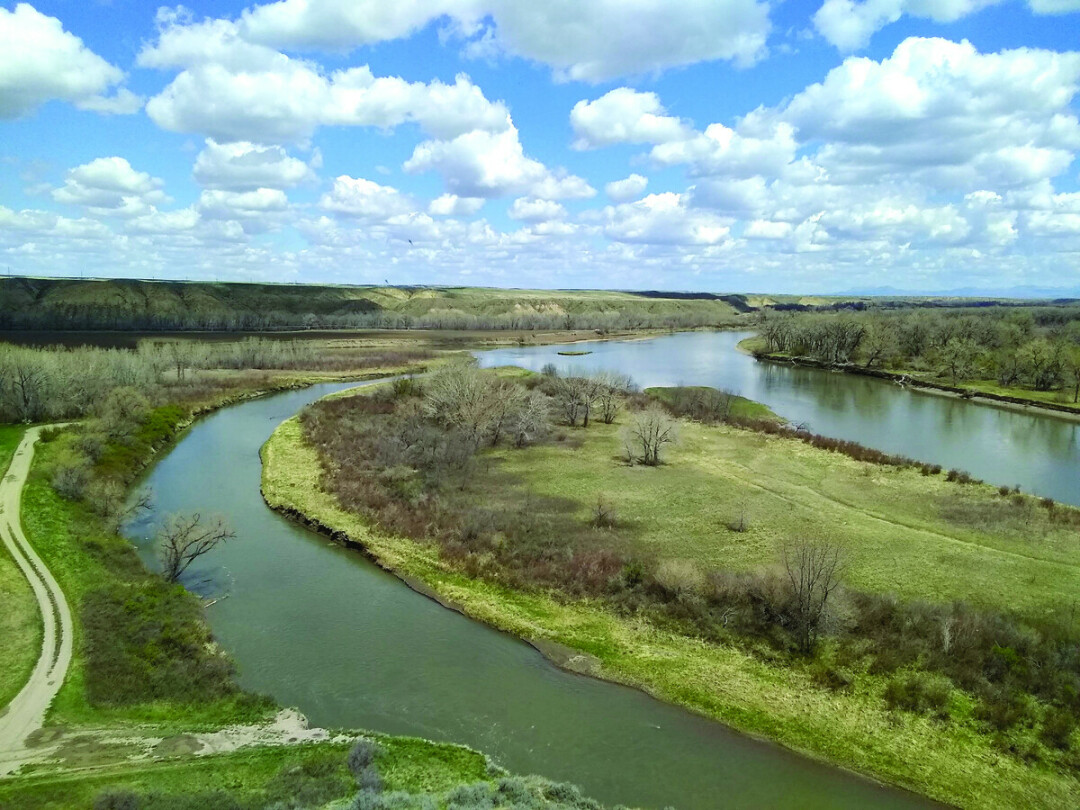 For me, any Montana road trip is liable to turn into a quest to find Lewis and Clark sites. The Marias River is one of these. The expedition first explored the river on their westward journey in 1805, not sure if it was the main stem of the Missouri or a tributary. They established the location and named the river. On their return in 1806, Lewis ascended the Marias to its headwaters and beyond, hoping it turned north, thereby increasing the area of the Louisiana territory. It continued west, and Lewis named his northernmost camp Disappointment. My own trip followed along some remote gravel roads, though I knew I was not lost, since there was a school bus just ahead of me. The road steepened downward and wound into a beautiful meadow at the junction of Cut Bank Creek and the Two Medicine River, where the Marias begins. Still leafless cottonwoods guarded the river bottom, and an old one-lane concrete bridge with thick wood planks down the center spanned the clear, rushing spring river. Sandstone cliffs over one hundred feet high ran along the north bank. The road up was so steep that my pickup fishtailed even in four-wheel drive. On the high bench, a huge wind farm and power station marked that section of the Blackfoot reservation. 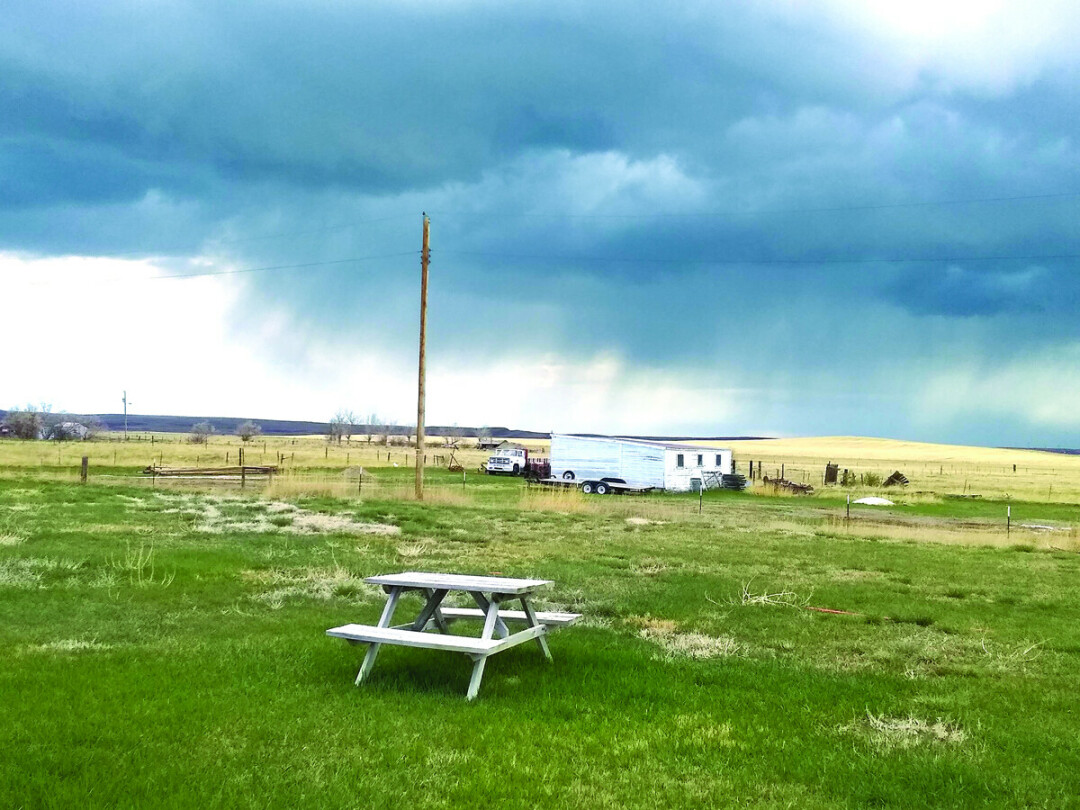 To understand why Montana is called Big Sky Country, simply drive north from Great Falls on Interstate 15. By the time you reach Conrad (certainly by Shelby) it will become apparent. My late afternoon trip with the cruise set at 80 mph passed the rolling high plains’ golden stubble and bright green winter wheat under the great blue dome studded with towering cumulus. My final stop for the day was Sunburst (another great name!), a quiet town just west of the interstate, about nine miles south of Alberta, with close access to the Sweetgrass Hills. I found a little RV park right in town, a few plug-in sites, and picnic tables with a patch of grass in front of each parking spot. There was no one around, just an old ammo box to stuff cash in for a night’s stay. I set up my tent in my little yard and pulled out the phone to text my wife, Ruth, and check a ballgame score or two. No service.

Main Street was just two blocks away, so I walked over. I guess I thought that official brick buildings would mean phone service, so I stopped on the sidewalk and tried again. Heard someone laughing and turned to see an actual phone company truck and employee. He informed me that my device would not work anywhere in town. Whether in the grocery store or the coffee shop, everyone in town was friendly and talkative—maybe we don’t need all those electronics to survive. Back at camp, I watched an impressive thunderstorm roll down from Canada. It rained hard for hours, and sliding in the mud on my way to the tent was a precursor of the next day.

In the morning, after a pleasant chat at the coffee shop, it was time to drive to the Sweetgrass Hills. The road east of Sunburst went under the Interstate and the pavement ended after a mile. There was no fear of getting stuck, since the gumbo was just a couple inches deep. But it was skating rink slick, and the constant danger was sliding off into the ditch. Four-wheel drive only made things a little tougher. The worst part was that there were no tracks, which meant the locals were not out there. I stuck it out long enough so that months later, looking at the map while sitting at home, I would remember how bad it had been and not berate myself for giving up too easily. That turned out to be about an hour and possibly fifteen miles. It was also much past common sense, which overall is not that common, at least for me.

That ended the planned portion of my trip. I was a long way from home with two days to go. Any disappointment was brushed away by a great sense of freedom. Possibilities were so many and varied that nothing specific occurred to me for some time. I carefully retreated to the Highline and drove east to Chester, a railroad and grain elevator town I had never visited. The map showed that I was close to Tiber Dam and Lake Elwell, another first for me. The lake was a typical high plains reservoir, with a gravel shore, and sagebrush hills. The lake was choppy with the breeze and there was a pleasant tree-shaded campground. Below the dam, the Marias flowed once again within its cottonwood-cool banks.

There are just a few books in my truck, but an abridged version of the Journals of Lewis and Clark is one of them. Seeing the Marias again drew me to Loma, where the river flows into the Missouri. I hiked up a hill to Decision Point, where in 1805 the Captains had decided which river to follow upstream. They chose correctly and were soon engaged in their month-long portage of the Great Falls of the Missouri. I walked around the area and then headed upstream to the old riverboat town of Fort Benton. I toured around the historic riverfront and the bridges, then found a spot for the night at Canoe Camp on the Missouri.

Watching people launching their boats for weeklong voyages on the Wild and Scenic River and chatting with the young river ranger left me thinking that my road trip was but a small adventure. I spent the evening sitting on the shore watching Canada geese arrowing upstream and flipping pages of the Journals. A river trip began to form in my head. At dusk, tipping back to search for that first straight up star, I saw instead an eagle floating high above. I leaned even further back to follow his flight and lost myself in the overblue.

Daylight was glowing through the tent fabric when I awoke the following morning. I performed my usual crawl and groan out of the tent, scrabbling in the grass to reach an upright stance. The goal was the picnic table laid out with the stove and the coffeepot. I walked down to the river to throw some water on my face, and crushed a sprig of sage on the walk up for some morning aroma. It was a long drive to Bozeman, but surely there were hikes to check out and a couple more Montana Main Streets to stroll along the way. Regardless of weather setbacks, spring road trips may be the best. They are surely the first, and thus full of anticipation for throwing off winter’s coat. And trips with mild disasters make for the best stories.