A Montana Ghost Story from the Dumas Brothel

Have you ever had a ghost follow you home? I have. My work as a psychic sensitive often calls me out to sites for paranormal investigation work. That is how I first came in contact with the owners-past and present-of the Historic Dumas Brothel in Butte, MT.

In the summer time I like to indulge in my hobby of driving to remote Montana Ghost Towns and visiting the cemeteries, museums and buildings that are the relics that connect me to the rich history of the area. Several years ago I took a drive over to Butte, MT where I came across the Dumas Brothel. The year was 2000 and at that time the Dumas was under the ownership of Mr. Rudy Geicek. I decided to go on one of the guided tours of the building and a lively guide named Rachael explained everything there was to know about the Dumas’ and its distinction as the longest running brothel in U.S. history. That’s right, the Dumas served as a brothel in Butte for approximately 92 years. Mining towns throughout the West were notorious for their brothels, and Butte was no exception. At one time Butte had a thriving Red Light District. Today it is the only building that remains of the sex worker industry of Butte’s past. My tour was fascinating and although somewhat spooky with its cold, dark and musty spaces and creaking floors, nothing I could actually call Paranormal Activity happened to me or anyone else on the tour that day. Perhaps that was because I had come to the Dumas as a Montana history buff, not as a psychic sensitive. I stayed a few minutes to talk to my tour guide Rachael and the subject of my work came up as something she was interested in so I left her my card. Early the next morning the phone awakened me. 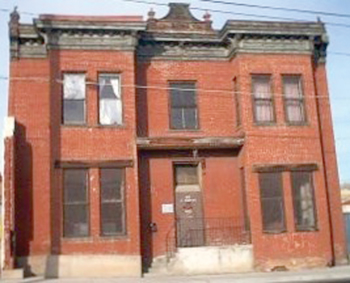 “What the Hell did you do in my brothel yesterday? You scared poor Rachel half to death!” It was Rudy Giecek, the owner of the Dumas.

“What do you mean? I just gave her my card”, I replied slightly shocked at Rudy’s way of introducing himself.

“I get a call yesterday from Rachel as she was closing up. She said that after you left she started to hear funny noises throughout the building. She thought maybe someone was inside-you know-maybe one of the people on the tour was still unaccounted for,” Rudy went on to explain, “And then when she opened up this morning the place was a mess! The hats that hang on the walls were on the floor lined up and down the hallway. Pictures that had been on the walls were lying on the floor. Interior doors that were shut and locked were open. And then I find your “psychic” business card on my desk. What in the world?” Rudy chuckled.

As we conversed I learned that Mr. Giecek had a boisterous sense of humor and that he was also no stranger to the paranormal phenomenon that haunts the Dumas. With his invitation later in our phone call to come back and further investigate the building, I too would also become intimately familiar with its otherworldly inhabitants.

A few weeks later I loaded the car up with two adventurous friends and we headed over to Butte. We were excited to spend some time at the Dumas and explore it’s history-Rudy had promised to take us into parts of the building that are normally closed to the public. Rudy was our tour guide that day and gave us full access to the place. One of the areas in the building that really raised my hackles and got my psychic senses tingling was down in the basement where Rudy had excavated and found a sealed room with a pristine example of an un-touched “crib”-a room where prostitutes serviced a customer-that had been boarded up decades ago. The room contained a bed and a corner sink and nothing more-except the items that the former sex-workers there had inserted in the crevices in the walls. Old matchbooks, pieces of paper, condoms, etcâ€¦ were stuffed in between the cracks in piles that looked to be layered chronologically-it seemed like a great place to do an archaeological dig! As we were exploring the room and the area around it I suddenly felt a sensation of spider webs on my neck and shoulders. Believing myself to have walked beneath cobwebs, my hand instinctively went up to swat at the empty air. I thought to myself, “How strange” and then I saw out of the corner of my eye a solid black shadow figure dart from one corner of the room to another. I gasped and my friend whispered, “I saw the shadow too.” Rudy just laughed, explaining that shadow figures, orbs and actual apparitions were a regular event in the Dumas basement.

Several experiences that were similar to this happened to everyone present in the basement that day. It was more than a “creepy” feeling; all basements are creepy inherently with their low ceilings and gritty dark walls. This was frightening, and I am not easily frightened.

The other area of the Dumas that was very active for me was the upstairs’ Madam’s room on the top floor. At the time the room featured beautiful paper on the walls, a bed from the early 1900’s that was richly adorned in bordello style, and a rendering on an easel of a woman who had once worked in the brothel. She had flawless pale skin, smallish facial features, thin severe lips, luminous eyes and a feathered teal blue hat. She wore a modest, high collared dress that was open at the neck, which I thought at the time was an unusual outfit for a “soiled dove”. She had the air about her that she was a lady of affluence, hardly what my mind’s eye would have imagined as a painting of a prostitute or madam. Her name was Bonita. The whole upstairs area where this painting was located reeked of sadness. It was palpable. A time or two I even sensed I heard a woman sobbing. An empty golden birdcage hung from a post swayed softly as if rocked by an unseen hand. 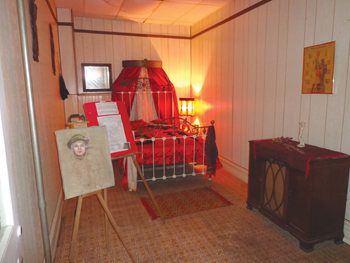 Returning home I went to sleep. As I slept I was awoken at 1 am when I felt my cat jump up on my bed and then pounce on my covered foot, HARD. I sat up to shoo her away while simultaneously remembering my cat hadn’t come inside that night! And then I saw her. Bonita. She was sitting on the end of my bed, teal blue hat and all. It was the lady from the painting in the Dumas! She had followed me home. The hair stood up on the back of my neck when I realized through my sleepy eyes what I was seeing. A little peeved at Bonita’s presence I asked her to explain her presence. You see, I have a rule-No Ghosts Allowed in my bedroom, my sanctuary. Apparently this persistent broad didn’t care for my rules and ignoring it she began to answer me in a confident and authoritative tone. “Please tell Rudy that the Dumas will be OK. Rudy will save the Dumas. Tell him Bonnie said so.” She looked me directly in the eyes and held my gaze for a moment with her blazing eyes. I sat up to poke at the spook and POOF! It completely vanished. Gone, as though it was never there. The only remnants left was the dimpled outline of my bed cover where the apparition had sat upon it and the lingering and faint scent of ladies perfume.

The next morning I called my friend who had accompanied me to the Dumas the day before to make sure I wasn’t losing my mind. As I told her what I saw she let out a shriek. “Noooo! She had to be real! Remember the teal colored hat, the pretty one you noticed in the case? It was also in the painting of Bonita in the Madam’s Room!” With that I knew that I had to call Rudy immediately. There was something I didn’t understand. What did Bonita mean, “Rudy will save the Dumas”? From what? What danger was hanging over the Dumas? I phoned Rudy to explain my visitor. Rudy sighed heavily and went on to explain in detail that the Dumas was the focal point of a lawsuit and a legal nightmare was looming that threatened to take from Rudy the building he had put his heart, soul and wallet into. To put Rudy’s mind at ease I repeated the words that Bonita said to me “Rudy will save the Dumas”. A few months later I learned that Bonita’s words were true. Rudy saved the Dumas. The legal issue was settled in his favor and the ownership of the building, it’s contents and it’s ghosts all came back to him. 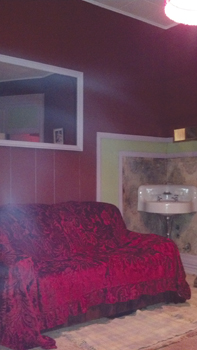 My history with the Dumas continues to this day. Now under the ownership of Michael Piche and Travis Eskelsen the spirits of the Dumas continue to haunt its walls and the souls who are working on preserving it. Renovation and Historic Tours are being conducted and as documented on a recent chilling episode of the SyFy Channel’s series “Haunted Collector” the increase in human activity has stirred up ghostly goings on. Video documentation during the episode entitled “Haunted Brothel” along with EVP audio recordings reveal objects moving on their own and furniture shaking and moving as though someone or some thing is present although no one is in the room. Several of the TV show’s cast and crew reported seeing black shadow figures, feeling icy cold gusts of air and the sensation of being touched by an unseen hand.d

Although the Dumas officially closed for business in 1982 it appears that the ghostly residents did not get the message. Perhaps if you tour the Dumas Brothel yourself you will also have one of its spirits follow you home.

Kathleen Johns is a Psychic based out of Bozeman, MT.   For more spooky stories visit www.KathleenJohns.com

The Piano Man of the Old Faithful Inn