The Piano Man of the Old Faithful Inn 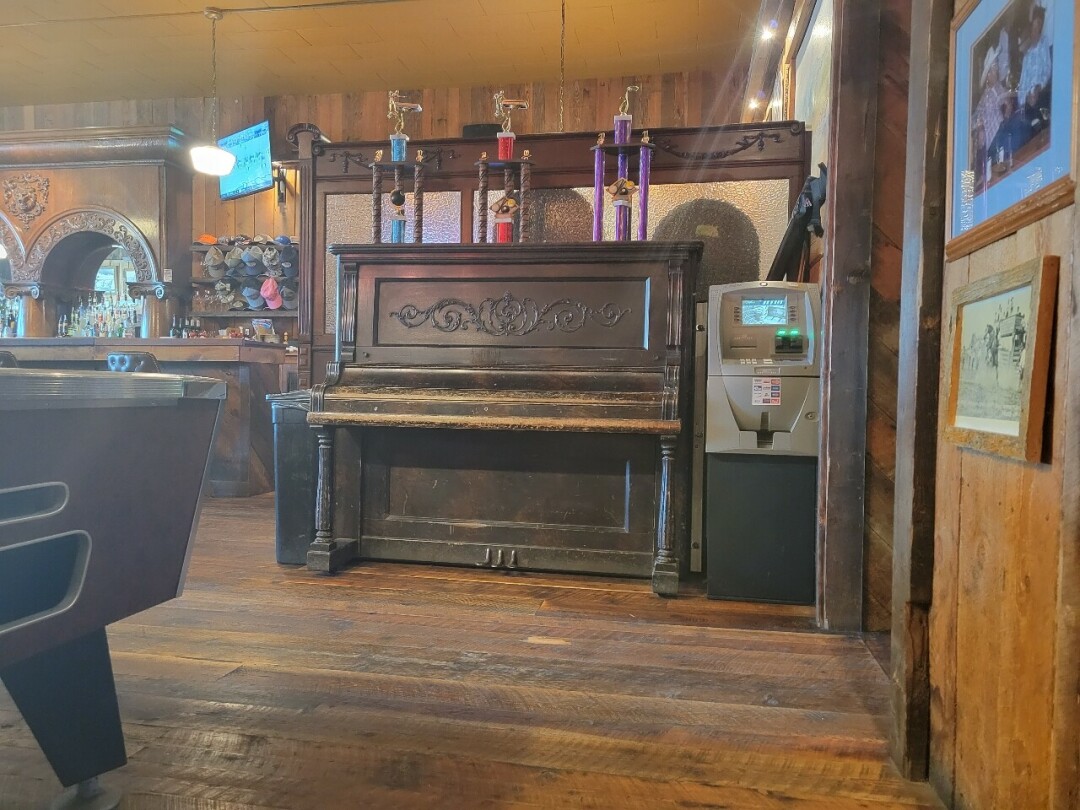 Inside the doorway, the sounds of a piano playing a jazzy tune from the 1930s drift by like an echo from the past, and I instantly think I recognize the melody.

Is that Fats Waller?

As I headed towards the door to get a closer listen, a cool rush of air blows past my cheek. It was a mild weather Montana day, yet the air in the room was so chill it made the hairs on my arms stand up.

Rounding the corner by the bar, I hummed along to “This Joint is Jumpin,” the old familiar words springing to life in my head:

“The piano’s thumpin’,
The dancers are bumpin’,
This here spot is more than hot
In fact, the joint is jumpin’”

I looked across the room to the piano expecting to see a musician at the bench with fingers poised to play. Instead, I saw an old Orton Bros. upright with the lid closed firmly and the bench pushed in as if no one had sat on it in a long, long time.

I HEARD the piano playing. I looked askance to my assistant and the others in the room tagging slightly behind. “Do you hear that? That piano music?” They all motioned “no”. And that was only the first few seconds of my paranormal investigation of The Old Faithful Inn (now known as Stacey’s Old Faithful Bar) in Gallatin Gateway, circa 2006.

I continued to walk towards the piano while my psychic eye began to piece together a tall, lanky man, slicked back hair, white button-down shirt rolled up at the sleeves, collar up, cigarette dangling from his mouth as he worked out the tune for the dancers in the room. But instead of possessing a cool jazzman’s vibe, the Piano Man was bothered. The scowl on his face and the way he kept looking back towards the bar area all jumpy-like got my attention. I sensed something was about to go down as I slunk back a bit to the side to step out of the scene for a second. Relaying to the others what I was sensing, I heard my hollow voice sounding as though it was coming from someone else but not from me. I remember quite vividly seeing the commotion all around me begin, but I was no longer in my physical body. Then I saw him. The Piano Man saw him too. There was a young guy with a drink in his hand and he was bothering a woman nearby. He just would not leave her alone, leaning across her and trying to press up against her. The woman tried to push and shoo him away to no avail. The Piano Man was pissed. Words were exchanged. The next thing I know some burly men are laying the Piano Man down under a small tree outside, a bloody trail marking the path from where they had drug him from the road…. 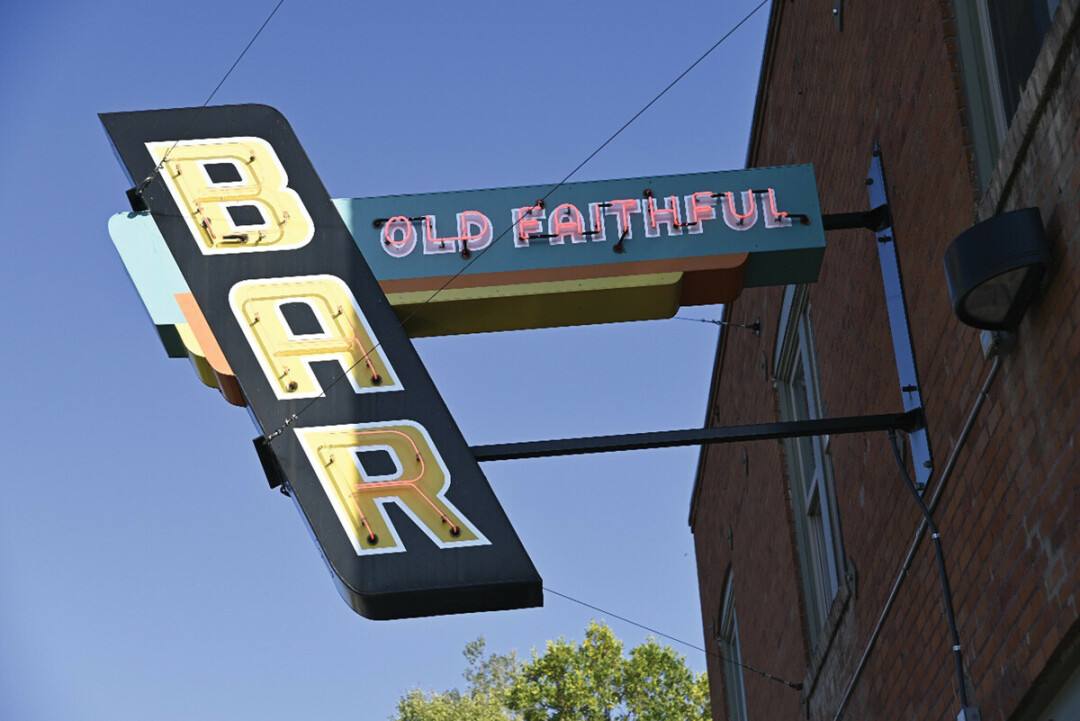 I was also outside now, with the wounded Piano Man and the other men, shocked and queasy from what I had just witnessed. I saw a pool of blood under the tree and heard the anxiously whispered words “bled out” and “knife.” I felt a sharp pain under my left ear that traveled all the way down my neck. Then POOF! Just like that, the vision is gone and I am no longer caught up between reality and the past.

The paranormal investigation continued to the upper floor of the building where one room’s windows face out to the north, a hallway divides down the middle. As I stood there, the trance started to take me over again and I see, hear and feel a woman, mid 40’s, hair pinned up off her neck, beige pumps pacing back and forth across the wooden floorboards. She was wringing her hands and fiddling with a scarf tied around her neck, darting every now and again to look out the window. “Hurry up! Hurry Up!” I can hear her plead with tears in her voice. She looked out the window again, and down towards the street and spied car headlights in the near distance coming her way. A slight look of relief crossed her face as she headed into the next room. And I see no more. The upstairs was stuffy and musty, and I noticed this for the first time as I floated back into my body. The entourage and I headed back downstairs to finish investigating the remainder of the house and the grounds.

I had been called to investigate the Old Faithful Inn to help the employees understand more about the presence that they and others have felt in the building for years. Having recently had a face-to-face encounter with an entity that could not be explained, everyone who worked there knew there was something definitely afoot.

Back at my Bozeman office, I filed the investigation with the other “closed” cases. To my surprise a few weeks later, a white envelope mysteriously slid under my office door. As my hands trembled and a deep cold chill spread through my core, I read the note: “Spoke to Vera Spring. She worked at Gallatin Gateway Inn. She told me a story of the Piano Man who was murdered in a knife fight. Maybe the library would know more???” The note was signed by one of the people at the investigation.

The thought of researching this event to piece together the snippets that I saw from my psychic experience with a historical record was enticing but it wasn’t until 2015 that I sat down and did the research that led me to the tragic history haunting the Old Faithful Inn.
It was late one night back in the Summer of 1939, and The Old Faithful Inn was in full-on Saturday night party mode. The Beer and Dance Hall had live music on the weekends and visitors on the way to Yellowstone lodging at the nearby Gallatin Gateway Inn would drop in and mingle with the crowd of locals looking for a good time. May Ping Sellards was the owner of the old Salesville Bank building now turned Inn. The bank ”quit” in 1925, and after Prohibition ended May, being the shrewd business woman that she was, jumped at the chance to make a profit by taking advantage of the boom in tourism to Yellowstone that the passenger trains to the Gateway brought in. She provided beer, music and dancing and some upstairs rooms for travelers looking to sleep it off. As May put it “It’s more than a bar, it’s a convention center.” Interest was so great that May hired on a house musician by the name of Boise Menzel to play the beautiful Orton Bros. piano that she had brought over from Butte. And that is exactly what Boise was doing that August summer night, what he did best, playing songs folks could dance to. Prior to playing for May Ping’s establishment Boise, had played with the 163rd Regimental Band and over at the Eagles Dance Hall. Among the crowd at the Old Faithful Inn that night was May Ping, Boise’s wife Ducky, his close friend and fellow musician James Copenhaver and others. The crowd had wound down some time around 4 a.m. when Boise recognized a young man by the name of Harold Brown, a hay hand from Roundup. A few weeks prior, Boise had thrown Brown out of the bar for getting fresh with his wife Ducky. Brown vowed to come back and “settle” things with the Piano Man. And on August 13th, 1939, Brown made good on that vow. Boise and Brown exchanged words and went outside into the pitch-black night to fist fight. Boise was getting the best of Brown when Brown pulled a 4-inch hunting knife and drove it 3 inches deep into the left side of Boise’s skull right behind the earlobe. Boise called to his friends “Get him boys! He’s got a knife and he has cut me!” Brown was surrounded and subdued. Boise was able to walk back into the Beer Hall on his own steam. May Ping called the Sheriff over. Boise was bleeding profusely and it was decided he would have to be moved. He was laid down for a bit under a tree in the side yard. Later a witness would remark that Boise had bled so much the ground underneath where he had lain looked like an animal had been butchered. Boise was moved again, this time to the Inn’s upstairs rooms to await the doctor. At some point Boise’s wife showed up to wait with him upstairs, then the Sheriff came and it was determined that Boise had to go straight to the Bozeman hospital.

As for Brown, he went straight to jail where he learned that Boise did not survive the knifing. Brown’s response to the news that he had killed a man? “I’ve been cut up as bad as that before and went to work the next day,” he taunted followed by “You’re not kidding me, are you?” Despite his stated intent and premeditation, Brown was acquitted by a jury of 12 and set free.

Boise was buried at Sunset Hills Cemetery in Bozeman in the Menzel family plot. He was 30 years old. His wife Ducky would stay in the area for a while and eventually moved to the West Coast. She never married again and by all accounts was forever marked by the tragic murder of her husband that took place right before her eyes.

Do the spirits of Boise and Ducky, and perhaps May Ping or others from that tragic night haunt the site of the former Old Faithful Inn? To hear past and present employees tell it, there is something eerie that goes on…. Apparitions of a woman seen downstairs at the bar, loud bangs and crashes in the kitchen area when no one is in it, the worn-out ivory keys of Boise’s piano playing notes on their own and footsteps going across the floorboards in the upstairs rooms are just a smidgeon of the otherworldly phenomenon at the Old Faithful Inn some eight decades hence.

Kathleen Johns is the owner/founder of Mantra located in Bozeman, MT. Kathleen holds a degree in English Literature from MSU/Bozeman and is an avid high altitude gardener. You can connect with Kathleen through her website at www.KathleenJohns.com

A Montana Ghost Story from the Dumas Brothel