On a pleasant Sunday in July 1910, sixty-nine single men gathered in Manhattan to commiserate with each other on their lonely conditions. According to the Manhattan Record, ‘Brooks’ Duff, Charles Duffin, Al Oliver, Bill Perks, and George Kellogg, “all past masters at the culinary art,” prepared a special picnic of bologna and limburger cheese. The men were treated to a guest speaker, Mr. George White, who was married but “spoke to the boys of the blessedness of single cussedness.” The mood dampened somewhat, however, when Mr. White mentioned that “the home and fireside were the bulwark of American citizenship,” reminding the men of their lonely states. The afternoon concluded with songs, stories, and swimming. This first meeting of the Manhattan Bachelor’s Club proved wildly popular.

In the late nineteenth and early twentieth centuries, Gallatin County, Montana, lacked a favorable ratio of men to women. Male-dominated careers in mining, transportation and agriculture left few opportunities for single women to make a living. Consequently, unmarried ladies tended to remain near their families or in locations with more financial security. While many married women traveled with their husbands to the Gallatin Valley, the supply of single, eligible females was sorely lacking. Gallatin County’s first census, taken in 1870, recorded 390 females and 1,192 males. Most of the women included on the census were already married.

In the mid-1880s, an English immigrant by the name of Mrs. Isabelle Randall made an interesting observation in a letter to a friend back home in England. The Randalls operated a horse ranch near Moreland (later renamed Manhattan). Isabelle delighted in writing of her experiences in Montana and peppered her letters with amusing anecdotes. She recorded her observations of women in Moreland’s thriving social scene:

“The natives are passionately fond of dancing, and think nothing of driving thirty or forty miles to a ball… Girls are certainly favored out here—not the smallest chance of posing as a wallflower; and in the more important matter of choosing partners for life, it is literally only a case of choice, as the men outnumber the women ten to one. Matrimony, like death, spares neither age nor condition. I have seen young girls of thirteen and hideous old girls of fifty snapped up as soon as they arrived in the country…”

This unfortunate ratio caused lonely single men to band together informally at first and then formally in 1910. While it is unclear just how the Manhattan Bachelor’s Club began, males mourned the gender discrepancy early on. According to the Madisonian in 1887:

“…on the first of next June, two car loads of New Jersey girls will arrive in Moreland, ready to marry an eligible bachelor that will make the proper advances…we are of the opinion that this will be the best chance ever offered to some of the old fossils who have been living in lonely solitude on half cooked corn dodgers and ‘sow belly’ to get a life partner…”

In Manhattan, several factors contributed to this abundance of men. In the early 1880s, a businessman named Moreland and several other investors from Helena and England established the 10,000-acre Moreland Land Company. These early developers initiated a massive livestock business, which created farming and wrangling jobs for men. They planned to raise horses, reclaim some land for agriculture, and sell off smaller tracts. In 1882, laborers began work on the 17-mile Moreland Canal, constructed to irrigate the Company’s land with water from the West Gallatin River. A couple of years later, agricultural workers planted wheat and oats on an ever-expanding tract of reclaimed land. A great deal of manpower was needed to operate such a large enterprise, and between the canal and ranch jobs, the Moreland Land Company brought in scores of single male workers. 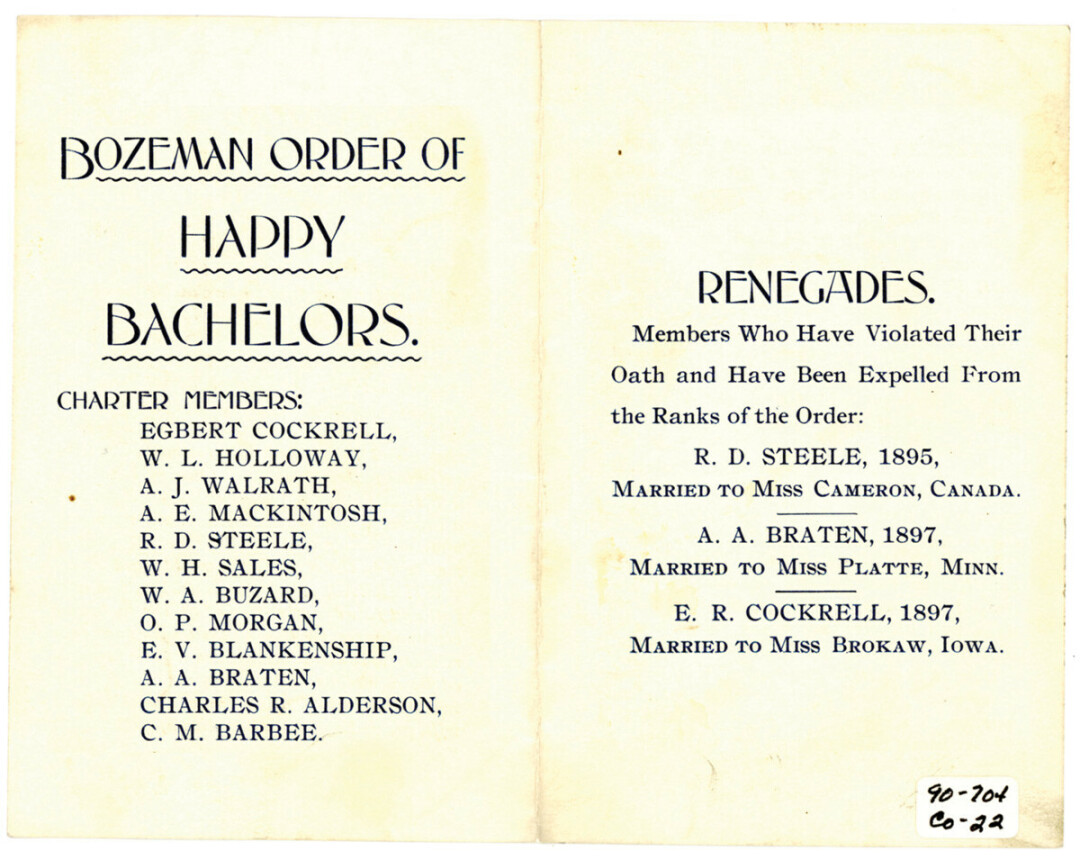 Most likely, the Manhattan Bachelor’s Club also gained membership from the ranks of Manhattan Malting Company employees. In 1889, a group of wealthy New York investors were attracted to the phenomenal agricultural potential of the Gallatin Valley and were particularly excited about growing barley. The investors, presided over by Henry Altenbrand, Sr., snapped up 13,000 acres near Moreland, most of which they purchased from the Moreland Land Company. Expanding on what Moreland had started, the new Manhattan Malting Company immediately planted barley and planned construction of a malting plant. In addition, the group created the West Gallatin Irrigation Company. This organization built the High Line Canal, which irrigated thousands of acres of land for barley and other crops. The Company hoped to attract immigrants interested in growing barley for malting. Between 1890 and 1892, Manhattan’s economy boomed as workers poured in to work on the canal, farms, and malting plant. In honor of the Manhattan Malting Company’s New York investors, Moreland changed its name to Manhattan in 1891.

The Moreland Land Company and the Manhattan Malting Company created hundreds of jobs that attracted single men from all over the country and the world. Industry continued to draw them with the operation of the Manhattan Pulp and Paper Mill from 1903 to 1907. By 1912, railroad construction and a building boom added to the abundance of work for males. Hence, the Manhattan Bachelor’s Club’s popularity skyrocketed. Summer picnics became an annual event and they provided a much-loved social occasion for lonely men. In the absence of parents, wives, and children, the club became their family.

In the summer of 1914, periodic reminders of the upcoming bachelor’s picnic appeared in the Avant Courier newspaper. On June 10, the newspaper reminded readers that “This is one of the big summer features of the Gallatin and each year guests from all over the county are entertained at the big picnic.” A short piece on July 8 notified interested parties that “the unique organization of Manhattan” would hold its annual event at Oyler’s grove on the West Gallatin.” Committees of approximately forty men each planned the event. On August 26, 1914, the Avant Courier exclaimed:

“Sunday Manhattan was drained of male population while the road between the town and Oyler’s grove on the West Gallatin was white with dust, beaten by the automobiles and rigs running out to the grove, which was the scene of the annual Bachelor’s picnic. Hundreds of men from all over the county and even from the cities of the state remote from Gallatin, enjoyed the hospitality of the Bachelor’s Club. This annual event has been growing bigger each year. This year most of the political candidates who are seeking nominations in the primary election found it convenient to attend the Bachelor’s club picnic.”

Bozeman, too, had its own version of a league of unmarried men. The Bozeman Order of Happy Bachelors was probably established in the early 1890s, and like the Manhattan group, the Bozeman organization provided social activities. For many lonely men, the group became a surrogate family. They used humor to poke fun at each other and to console remaining bachelors when matrimony lessened their ranks.

For example, the Bozeman Order of Happy Bachelors published a small commemorative card in 1897 to mark the unfortunate marriages of several members. The printed card included a resolution by the group to “expunge” the names of Egbert Cockrill, R. D. Steele, and A. A. Braten from “all records of this institution.” The remaining bachelors affirmed that “The security and good name of our order is placed in jeopardy by such traitorous conduct on the part of those who have heretofore claimed and received its protection…” Additionally, group members resolved that “the constitution and by-laws of our order be draped in mourning for a period of thirty days, and all members clothe themselves in sack-cloth and ashes for a like period of time.”

Interestingly, none of the three above-named Bozeman bachelors—Steele, Braten and Cockrell—married local girls. All three brides originally hailed from the Midwest and Canada. So what became of our three “happy bachelors?” A little research gives us a glimpse into these men’s lives and reveals the rest of their stories.

Robert D. Steele was a banker and insurance agent in the Gallatin Valley for several years in the early twentieth century. He married Miss Margaret Stuart Cameron in Ottawa, Canada on February 17, 1896. Tragically, Margaret passed away in January 1905 in Bozeman after a long illness and she is buried in Ontario, Canada. R. D. Steele remarried in 1907, to Minnie LeGrande Elliott in Lexington, Kentucky. The couple moved out of state shortly thereafter.

Well-known Bozeman merchant Andrew A. Braten began his career as a retail clerk for Bozeman’s famous Willson Company department store in 1896. In 1897, Braten married Emma Platte, who was originally from Minnesota. The couple settled in Bozeman, where they had one daughter. Andrew Braten established his own Bozeman business, Braten’s women’s clothing store on Main Street, which thrived for over thirty years. Unfortunately, Andrew Braten’s marriage ended tragically. Emma’s body was found in a Bridger Canyon spring in March 1918. She had left her Bozeman home on the morning of her death, telling her husband she was going for a long walk. The official cause of death was suicide by drowning, and the local newspaper reported that she had been in ill health for some time. Andrew Braten continued to operate his clothing store in Bozeman until his death on March 30, 1939.

Egbert R. Cockrell was born in Missouri, but came with his parents, Sadie Railey and H. C. Cockrell, to the Gallatin Valley as a child. He married Miss Dura Brokaw in Des Moines, Iowa in May 1897. Egbert and Dura spent much of their married life in Fort Worth, Texas, where they were both associated with Texas Christian University—Egbert was a professor of history and political science, and Dura was head of the art department. The couple had two children, Dura Louise and Vardaman Brokaw Cockrell. In addition to his teaching career, Egbert R. Cockrell served as Mayor of Fort Worth in the early 1920s before the family moved to Fulton, Missouri. Egbert was the President of William Woods University in Fulton from 1924 until his death in 1934. Dura eventually moved back to Texas, where she passed away in 1961.

On November 3, 1914, Montana women earned the right to vote in local and state elections. Suffrage required organization and sufficient numbers of women in the state—a sign that Montana’s gender discrepancy was beginning to balance. The Manhattan Bachelor’s Club held no picnics during the summer of 1918. Perhaps this was due to World War I. Or maybe the increase in women resulted in more marriages and club membership dwindled. Either way, the Manhattan Bachelor’s Club had served its purpose. The Manhattan Record summed up bachelor’s clubs perfectly when they reported on that first Manhattan picnic in July 1910: “…the fun was enjoyed like so many boys, in fact they were all boys just for the day.”