Our community’s past is filled with iconic women, so while it is impossible to pick one over another, here are ten ladies who stand out as Bozeman history icons.

Audrey Anderson
Bozeman’s favorite red-haired restaurant owner Audrey Anderson grew up in an orphanage in Twin Bridges, Montana. She worked as a telephone operator before marrying her first husband, who died after an accident on their honeymoon. In 1960, Audrey moved to Bozeman and purchased the only locally owned pizza place. Over the next 30 years, Audrey’s Pizza Oven employed scores of young people and provided a venue for hundreds of first dates. Anderson’s tough-love management style made her a substitute parent for many kids. Loyalty to Audrey pried sleepy employees from their beds on freezing winter nights when customers needed a pizza delivered. Though she still tossed pizza dough in the air at age 88, Audrey’s Pizza Oven closed in 1990. The restaurant revived in 2010, and is currently located in Billings, Montana. Rosa Beall
Early Bozeman resident Rosa Beall passed away at age 91 in 1930. Over her 65 years in town, she witnessed Bozeman’s transformation from a handful of log cabins to a sophisticated city boasting electricity and paved streets. She arrived with her first husband and two small daughters in 1864. Difficult times ensued, and her husband took the children and left, abandoning Rosa. She never saw her daughters again, and sadly, neither survived to adulthood. Rosa married William J. Beall in 1868, and they made their home on the north side of town. Nearly 20 years after William’s death in 1903, Rosa downsized and moved into the Evergreen Apartment building, staying active in St. James Episcopal Church for the rest of her life. A portion of William and Rosa’s property on North Bozeman Avenue is now Beall Park. 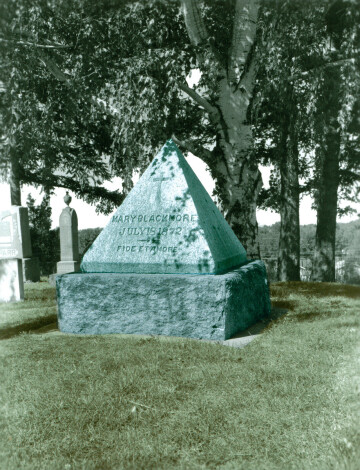 Mary Blackmore
Wealthy English couple William and Mary Blackmore stopped in Bozeman in 1872, intending to take a brief rest before exploring Yellowstone. Mary became suddenly ill and Lester and Emma Weeks Willson welcomed the couple into their home. Sadly, Mary died only days after her arrival. William Blackmore purchased several acres of land on a hill overlooking town, buried his wife, and donated the land to the city. One can still find Mary’s pyramid-shaped gravestone in what is now Sunset Hills Cemetery. Her marker mimics the form of Mount Blackmore in the Gallatin Range, named in her honor by Dr. Ferdinand Hayden, Yellowstone explorer and recipient of financial backing from William Blackmore. As for William, he returned to England, where his empire crumbled and his life tragically ended in suicide.

Eleanor Buzalsky
Eleanor Buzalsky, or “Buzz,” grew up in North Dakota, where she began teaching right out of high school. Her brief marriage to Edward Buzalsky began just before World War II, where Edward was tragically killed in 1944 while serving as a tank commander in Belgium. Eleanor never had children, but after 38 years of teaching and coaching, she always said “she had lots of children.” Beginning in 1953, she taught physical education at Bozeman Senior High School for 30 years, coaching generations of Bozeman teenagers. Even in retirement, she never lost her passion for sports and religiously cheered on local high school and college athletes. “Buzz” passed away in 2008 at age 87.

Bertha Clow
Trained nutritionist Bertha Clow came to Bozeman from Wisconsin in 1929 to join the faculty at Montana State College and taught nutrition in the home economics department for the next 40 years. Besides teaching, Bertha enjoyed consulting with local organizations and writing newspaper columns. Weaving together her love of history and nutrition, Clow transformed early recipes, diets, home remedies, and even holiday dinners into articles and books. A talented photographer, Clow was a dedicated member of the Bozeman Camera Club. She and her fellow club members captured iconic images around Montana and Gallatin County during the U.S. Bicentennial in 1976.

Louisa Cousselle
According to her 1886 obituary in the Avant Courier newspaper, Louisa Cousselle, or “Big Lou,” was born in Great Britain. After traveling to Bozeman in the early 1870s, she quickly established herself as a highly successful madam, owning multiple local properties and a large mansion in New York. For several decades, prostitution was a big business in Bozeman, and a thriving red-light district operated just north of East Main Street. Madams like Cousselle contributed to the economy by arranging loans for Bozeman citizens and financing new development. She also provided early Bozeman doctors with a hospital. Her obituary described her as “kindhearted and benevolent,” though few details about her personal life are known. After her death in 1886, her body was transported back to New York, where she was buried at Green-Wood Cemetery in Brooklyn.

Mary Hunter Doane
Illinois native Mary Hunter arrived in Montana Territory in 1864 with her family. Mary’s father, Dr. Andrew Jackson Hunter, established a resort east of present-day Livingston at Hunter’s Hot Springs. Dr. Hunter’s bathhouses proved successful, and in 1885 he sold the business and settled in Bozeman. Mary attended private schools in the Gallatin Valley and Helena, Montana, before meeting Lt. Gustavus Doane. Despite their age difference (Lt. Doane was 20 years older), the two married in 1878. During their marriage, the couple moved frequently following Doane’s military assignments, but after her husband’s death in 1892, Mary remained in Bozeman. She was interested in local history and was involved in the Daughters of the American Revolution (DAR) and the Pioneers’ Society in Gallatin County. Mary assisted the DAR in placing historical markers around the Bozeman area, and her photographs of old Fort Ellis remain invaluable resources. 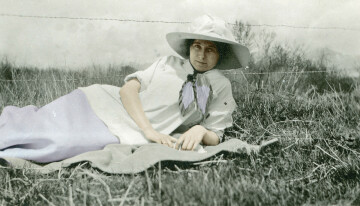 Minnie Preston
Minnie Preston owned and operated the Chambers-Fisher Department Store on Main Street for over 40 years, serving as company president from 1955 to 1985. In addition to her store and its employees, Minnie loved animals. In the 1960s, she remodeled Chambers-Fisher’s storefront, taking the opportunity to add a drinking fountain for dogs near the front door. Chambers-Fisher also contained Bozeman’s one and only escalator, a modern marvel enjoyed by scores of children for decades. Preston advocated support for downtown businesses while witnessing dramatic city growth that brought in national retail chains. After her death in 1998 at age 105, the Bozeman Daily Chronicle interviewed one of her friends, who remembered Minnie’s first visit to Kmart. According to her comrade, Minnie emerged impressed, commenting, “Well, no wonder people come here.” Her Kmart awe aside, Minnie sparked a push to buy local that continues today.

Sarah Tracy
In 1869, Bozeman was beginning to resemble a community. Businesses sprang up, and men journeyed east, each eager to return with a wife. One such spouse was Sarah Tracy, bride of local businessman William H. Tracy. Upon her arrival in Bozeman, she was greeted at the hotel by a crowd of men and only two other women. Seventeen-year-old Sarah never forgot her first meal in town. She wrote in her diary, “When supper was served a little later…every stool around the two long tables was occupied—Mrs. [Sophia] Guy, Mrs. [Ellen] Story and I being the only ladies. It did look somewhat like curiosity…I wonder if they thought Mr. Tracy’s investment was a good one.” Hotel proprietor John C. Guy admitted to Sarah Tracy afterward that such a large guest list (more than 70 men) was irregular. Sarah went on to write a fascinating reminiscence about her trip to Yellowstone in 1873.

Mary Vant Hull
In the 1970s, Mary Vant Hull and her friend Kit Miller sparked interest in building a new Bozeman library. It started with a simple message accompanying their checks for water bill payments--“We need a new library.” Others joined the cause, and the Friends of Regional Libraries was formed in 1974 with the purpose of supporting libraries across Gallatin County. A bond issue passed, and a new Bozeman Public Library was constructed a few blocks away from the old Carnegie library on North Bozeman Avenue. Mary’s crew oversaw a chain of volunteers who passed books by hand from the old library to the new (Note: This “new” library is now used as Bozeman’s City Hall near the corner of North Rouse and East Lamme). Mary Vant Hull also served on the Bozeman City Commission and initiated formation of Friends of Regional Parks (FOR Parks). In 2009, Mary and her crew of volunteers completed the Dinosaur Playground near West Oak Street. Planning took a full year, culminating in a community-wide, five-day building marathon. In an interview in 2015, Mary explained “now my project is just to be kind to people…I just want to help make people be happy.” Mary Vant Hull passed away in 2017 at age 89.