What's Your Beef? Grasping For Real Estate and Gasping For Air

I first moved to Bozeman in the late 90s. Like many young people I came in search of the American dream, or rather; I came in search of something greater than myself. I was immediately welcomed into the town by the residents and the culture. Everyone warned me it would happen, “Bozeman gets its hooks into me.” They were right.

My first place that I lived in was a half a step above a squatter’s paradise. It wasn’t much but it was my own slice of paradise. Every day I wake up to visions of the Gallatin River and the Bridger Mountains. It remains everything I had hoped it would be. As years pass and our town continues to grow, others have inevitably discovered the dream I have come to know and love.

Fast forward and we are faced with the horrors of Covid 19. A healthy dose of naivety and skepticism has kept far too many of the smaller and isolated communities, like Bozeman, believing that something as horrific as this pandemic wouldn’t touch us. For quite a while it did appear as though these communities were isolated enough that Covid did not in fact touch us.

But what began as a bulwark of invisible safety inevitably turned to our downfall and ruin. As Bozeman has lived on the fringes of the rich and elite with its proximity to Big Sky with the accompanying Yellowstone Club we were marked as a desirable refuge for those who could afford to come in and buy properties and houses and condos, often sight unseen. Often they could afford to pay more than market value.

Bozeman has had a long history and a very poor relationship in the battle for livable wages within the community. Ten years ago a person could easily afford to live in the Gallatin Valley if you were willing to maybe live outside of Bozeman proper a few minutes or miles, but you could, with some extra elbow grease, make ends meet if you were frugal enough. It was the literal American dream that if you worked hard enough you would succeed. But when the median price of a house is sitting at roughly $500k for a bare-bones 3BR / 2BA house, locals don’t have a chance in hell.

Now there is no real hope because you have a college town offering jobs that won’t pay you money enough to live on; not if you have to compete with the out-of-state money coming in. At best Bozeman has held a tenebrous balance of infrastructure with housing, jobs, and basic amenities like healthcare. That bulwark was never strong enough to survive the onslaught of people that literally showed up in droves from faraway places like California, Texas, Colorado, and Washington. It is something that we are used to seeing on a limited basis because we are a college town, but even with some very fine city leaders (and even a few poor ones), we could never have hoped to build the town up as quickly as it needed to be. Couple that with the elitist governor we now find ourselves saddled with in Helena, who deems it fit to cut mandates for affordable housing, it leaves a very sour taste in the mouths of many residents.

These elitists are people that have the means and the money and they have the availability to take what they want and they can pay extra to get what they want. This leaves the average Bozemanite stuck in a precarious situation. Do we now demand a fair wage, risk striking at work in hopes of a better paycheck? Do we pull up stakes and go somewhere else? Do we risk it all for the promise of something better in a different location? 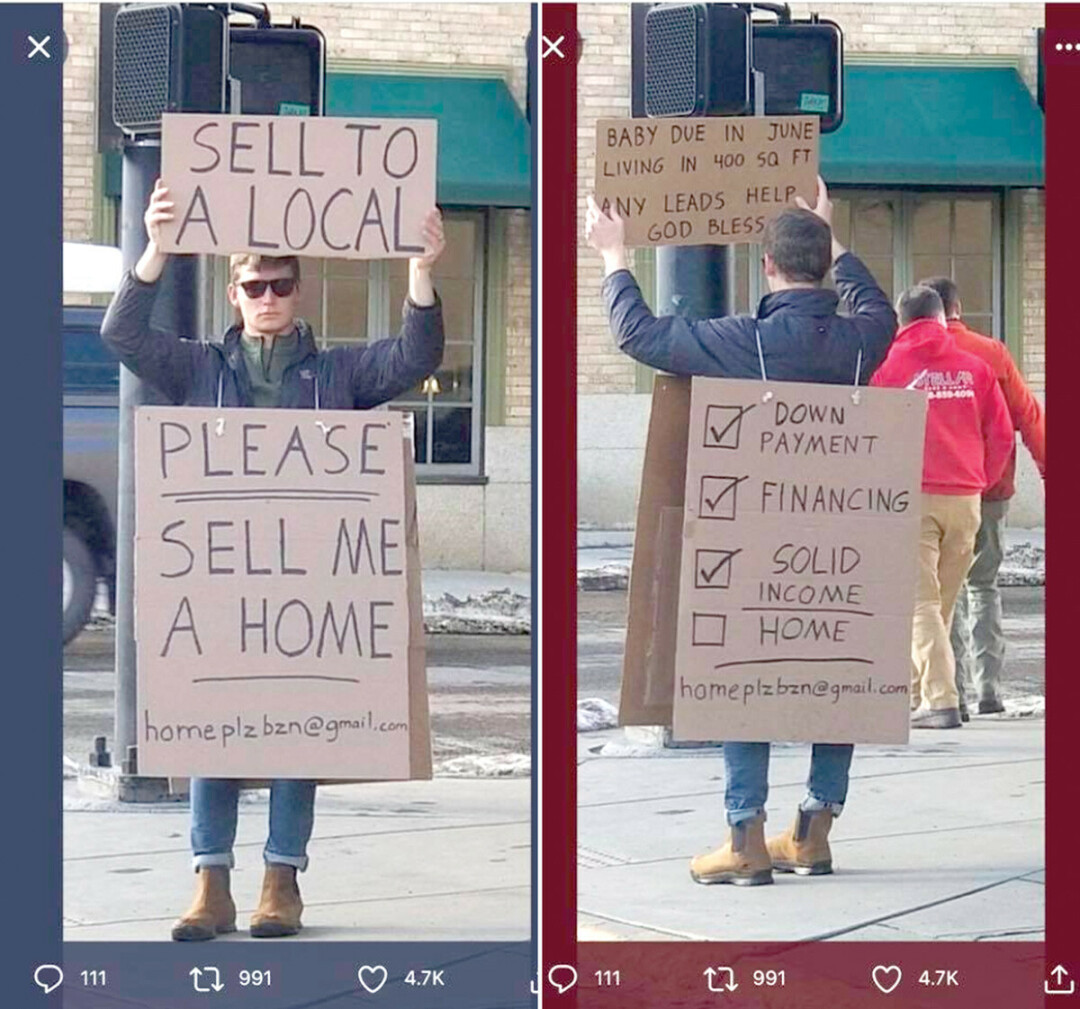 Just a few days ago an image of a man standing in downtown Bozeman wearing a sandwich board sign asking people to sell him a home has surfaced on the internet. Is this what our fair city has become? Bozeman has a bank on every corner, it seems, but not a one will dare invest in our community. You ask for a mortgage and they want proof of income that you can afford said mortgage, which none of the jobs in Bozeman are willing to pay. Trying to explain to a bank that you’ve been consistently paying your rent on time for the last five years apparently is not a solid qualification.

There are more than a few old timers, and this author is fast becoming one, who are sick and tired of seeing a valley they helped build and develop with a sense of inclusivity for, become a haven for the so-called elite who can afford to push people out who have lived here for not just decades, but for generations.

We need to do better.

Jimmy is an avid outdoorsman who feels the spirit that made Bozeman great is slowly being drained away.

What's Your Beef? MSU Soroptomist Plan Fails To Include…

What's Your Beef? Bills That Died in The Recent Legislative…

What's Your Beef? I Get by With a Little Help From my…