Spirit and Industry: The Montana State College Class of 1918 and Their “M”

One of Bozeman’s most well-known and visible icons would undoubtedly be the College “M” emblazoned on the side of Mount Baldy in the Bridger Mountains. Easily visible for miles, this oft-photographed landmark is an integral part of Bozeman’s identity. This May marks the monument’s 105th birthday and it is a fitting time to remember the Montana State College students who put it there.

Formally established as a land-grant school by the Montana State Legislature on February 16, 1893, today’s Montana State University started small. Total enrollment that first year numbered under 140 students. Classes met in the Bozeman Academy building on Main Street until the first campus buildings were constructed on the hill south of town. The school’s name went through several changes in the early twentieth century—”Montana Agricultural College” and then “Montana State College” were the most frequently used.

As the school took shape and student population grew in the 1890s and early 1900s, the little “cow college” began to form an identity. Blue and gold were chosen as school colors, student clubs formed, and the college newspaper, the Exponent, reported on news and events beginning in 1895. A mascot for the athletic teams proved harder to find. Because of the school’s agricultural heritage, early nicknames included the “Aggies” and “Farmers,” neither of which sparked much excitement. In the fall of 1915, the Exponent challenged students to submit suggestions. According to historian Merrill Burlingame, very few ideas came in and the paper’s editor, E. Lester Cole, and sportswriter Fred Bullock created a list of unclaimed animal mascots and settled on “Bobcats.” A front-page article in the January 7, 1916 issue of the Weekly Exponent declared “From now on Montana State’s teams will be known as Bobcats and if the members of these teams live up to all that this name suggests there need be no fear but that the Blue and Gold will not be victorious in the majority of her battles.”

The Montana State College class of 1918, numbering nearly one hundred students during the 1915-1916 academic year, fully lived up to the Bobcat name. Scrappy, confident, and full of ingenuity, these students certainly made their mark on Bozeman. In the fall of 1915, members of the class were enjoying their elevated sophomore status. College culture in the early twentieth century dictated that freshmen were subject to the rule of upperclassmen. Frosh men and women were required to wear green beanies and tam caps on campus, a practice which lasted for several decades. If spotted without the required headwear, freshmen boys risked enduring a forced haircut or a water trough dunking.

The class of 1918 sophomores seemed particularly focused on keeping the freshmen in line. The Weekly Exponent reported on many of these activities with headlines like: “’18s Capture Some Frosh Victims, Sophs Go on War-Path Wednesday Night,” and “Another Victim is Consigned to the Deep.” In the latter episode, a group of sophomores caught an unsuspecting freshman student on campus without his beanie and “…the party headed for the large watering trough back of the cattle barn. There, much to the discomfiture of the hatless infant, and the disgust of the high-bred patrons of the trough, a hurried and undignified immersion took place.”

Fierce class loyalty was the norm, and student cohorts desired to leave a lasting impression on their younger peers. Competition between the freshmen and sophomore classes was rampant and played out on both the football field and in the muddy frog pond on campus. Football matches were well-attended by both college students and Bozeman citizens, but the annual tug-of-war event at the frog pond was undoubtedly one of the highlights of the 1915 fall season. It offered a chance for the class of 1918 to dominate the large incoming freshmen class and repeat their win from the year before.

In a September 24 article dramatically titled “Big Marine Disaster to be Staged Friday,” the Weekly Exponent explained the history behind the tug-of-war. The first event was held in 1907, when the freshmen and sophomore classes pulled for nearly an hour before the match was declared a tie. Tradition dictated that the “second year men…challenge the freshmen to mortal combat,” and the goal was to pull the opposing team unceremoniously into the frog pond on campus. A complex set of rules emerged, including required weigh-ins, fixed positions for each player, and even rituals related to retrieving the rope and returning it to the barn. The class of 1918 chose Edward Preston as team captain and the event went off as planned on Friday, October 1, 1915. According to the Exponent, a crowd of “a thousand college students and townspeople” watched a short three-minute battle before “the first frosh hit the water and started on the cool, slimy journey through the home of the frogs and mud suckers.” The class of 1918 emerged victorious for the second year in a row. They were not, however, finished making their mark. 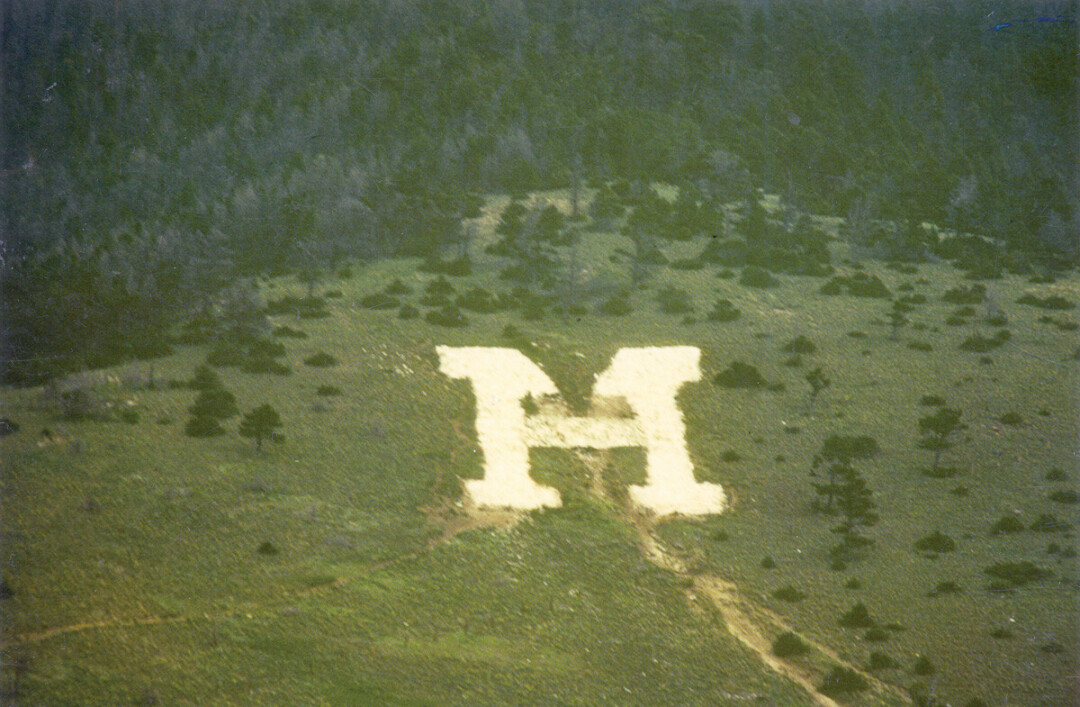 The first published mention of constructing a large letter “M” occurred in the Exponent on October 15, 1915, although the scheme had evidently been already heavily discussed. This novel idea would secure a legacy for the class of 1918, something more permanent than football matches and tug-of-war championships. The short news report noted that “[Edward] Preston advocated that the class place the letter “M” on some conspicuous hill or mountain. This suggestion was well-received and a committee of three appointed to determine a suitable location and the probable cost of erection.”

On October 22, 1915, the college paper proudly announced the approved location of the College “M”—Mount Baldy on the southern end of the Bridger Range north of Bozeman. The location was chosen for several reasons, including a sufficient supply of nearby rock to be used for building material and the spot’s excellent visibility from the campus and town. The article reported that during the previous week, several members of the sophomore class surveyed the site and made an outline of the letter “M.” They had an intelligent plan and took into account foreshortening and the angle that the “M” would be viewed from Bozeman and the college campus. The students also considered size and were planning on constructing the “M” at about 250 feet high so it would be easily visible from miles away.

In a nod to sophomore class ingenuity, college President James Hamilton approved a day off for the sophomores so that they might have sufficient time to construct the “M.” The labor-intensive work began on the morning of October 25, 1915. Fifty students worked all morning transporting limestone from the surrounding area to the site already staked out by Preston, Borton, Kuhns, Streets, and Thomas. In the afternoon, work continued in teams and “bucket brigades,” who were each assigned a portion of the letter to fill in with rock. Anyone who has climbed to the “M” is familiar with the steep grade, and it is amazing that no one was seriously injured by falling rock during construction. The Exponent reported on the progress the following Friday and admitted there were some close calls, boulder “tackles,” and “narrow escapes.” By sundown on October 25, the “M” was mostly filled in with stone and the sophomore class celebrated with food and a bonfire in Bridger Canyon.

Everyone knew that work was only half done on the “M.” The letter was built, but to make it stand out it needed paint. That task had its own set of challenges. Whitewash required water and lime, both of which would need to be hauled up the steep mountain slope by hand. Winter set in and plans to paint the “M” were put on hold until spring.

On Monday, May 8, 1916, the sophomores returned to finish their monument. After adding more rock to the small portion left unfinished the previous fall, the crew moved on to painting. Fortunately, someone discovered a nearby spring, which saved considerable time and effort and eliminated the need to carry buckets of water up the steep slope. As in the fall, the sophomores broke into teams—some adding more rock, others fetching water, and still more responsible for painting. Thanks to the use of the hose and spray pump from the college greenhouse, the “M” was covered in white paint by the end of the day. The class of 1918 celebrated with another picnic and bonfire in Bridger Canyon before squeezing into the back of a large truck for the trip back to campus. The Exponent described the scene: “Forty-nine of the class came in on the big power wagon and suffice to say that those unfortunates who had secured standing room near the rope stretched across the back were in danger of being forcibly amputated at the waistline at every surge of the closely packed crowd.”

As reported in the Exponent on May 12, 1916, the finished “M” measured “two hundred and forty feet high by one hundred feet between the legs.” Each leg measured twenty feet wide, and the total surface area of the letter was estimated at over fifteen thousand square feet. Apart from the initial surveying work, construction of the “M” was completed in only two full days—October 25, 1915 and May 8, 1916. At the time, students optimistically claimed this was the biggest letter in the world, noting that the University of Utah’s “U” was only one hundred feet tall.

Today, there are hundreds of “mountain monograms” and “hillside letters” overlooking towns and sites across the western half of the United States. Bozeman’s “M” is one of the older monuments and has remained virtually unchanged in one hundred years. One notable modification occurred in the late 1970s, when members of a Bozeman Senior High School class transformed the “M” into an “H” for “Hawks.”

World War I and then the Spanish Influenza pandemic interrupted the class of 1918’s carefree college years. Of the five members of the initial “M” survey party—Preston, Borton, Kuhns, Streets and Thomas—only Rubert Streets graduated with his class. Edward Preston, Carl Borton and Raymond Kuhns entered military service during WWI and were absent when the rest of their class graduated in the spring of 1918.

According to the college newspaper, the class of 1918 received multiple offers of help from outsiders who wished to assist with creating the “M.” Each of these were turned down. As the Exponent summarized on October 29, 1915, “The construction of the ‘M’ was a sophomore idea and was carried out entirely by the members of that class. It was erected as a lasting monument to the spirit and industry of the class of 1918, but principally as a mark of their devotion to M.S.C.” In the 1918 MSC Montanan annual, the class summarized their work on the “M” and closed with the following statement “May the M stand long as a symbol of our loyalty to Montana State and a reminder of what a united class can accomplish.”

The Block That Was Rocked