Maps are fascinating. They are factual and authoritative. Roads and trails, place names and locations are described and believed. Maps depict the relationship of one place to another and chart the distance between them for us. They are indispensible to our knowledge of where we are and where we are going. Whether it is Rand McNally or the United States Geological Survey or Google Earth, we take maps for granted. We rely on them.

The maps of at least one section the Bridger Mountains are confusing and inaccurate. In the first great rise of peaks in the Bridger Ridge beginning near Bozeman there are five separate high points. From there the ridge drops significantly and the next high landmark to the north is Saddle Peak. So it is easy to isolate in view these five points. From most places in Bozeman only two of these summits are visible. The rest are hidden behind these two as the ridge bends temporarily to the northeast. But from out in the valley, from the airport, or even from I90 near N 19th all five of the summits are visible. They are fairly uniform in height but there is a definite rise in elevation from south to north.

However, on every map of the Bridger range that I can find the elevation numbers along with the contour lines are reversed with the highest point in the south and the elevation of the others falling off toward the north.

I first noticed the north to south decline while running in the Bridger Ridge Run. If there is one thing a runner in that event is acutely aware of at all times it is elevation. So the general lessening at that point as runners head south to the M finish line, and also its gradual nature, is very welcome. A steep downhill is almost as odious as a steep uphill. After the race, looking at a map both to congratulate myself for finishing and to look for ways to shorten the course for the next year (not possible), I noticed the elevations numbers. Later, on more leisurely hikes to Baldy and beyond, I was definitely walking uphill, while the elevation and contour of my map indicated the opposite. Baldy is listed on most maps as 8914ft in elevation. The next rise which is just north and just a bit higher than Baldy has a contour as high but no elevation is usually listed. About quarter mile north lies a ridge a hundred yards or so in length that again is somewhat higher. Beyond this ridge a few hundred yards is Bridger Peak which is significantly greater in elevation. It is listed as 8634ft on most maps. The last point of this group is part of the ridge north of Bridger Peak. It is lesser in elevation the Bridger Peak but higher than the others.

After consulting numerous maps and always finding these same numbers I decided to use an elevation app. Standing on the summit of Bridger Peak it was easy to see that it was the highest point from the beginning of the range to the south until the top of Saddle Peak to the north. Still, I figured a GPS reading would provide some authentication. I obtained the following readings: Baldy 8684ft; rise just north of Baldy 8707ft; Long ridge north 8762ft; Bridger Peak 8880; Point just north of Bridger, the north subsummit 8866ft. These readings show a steady increase in elevation from south to north already very apparent to line of sight. On one of these trips I hiked on to Saddle Peak. Its twin summits are virtually the same height but the southern one is usually listed as 9162ft. My reading was 9160ft.

Anyone doubting these discrepancies but unable to hike the miles up the mountain required to see and/or document them could simply find any map of the Bridgers, note the listed elevations. drive to the airport, and look up at the view. Another great spot to view the ridge is from the east side on Montana 86 on the drive back from Bridger Bowl. Just south of Stone Creek the road curves to the west and the peaks from Bridger down to Baldy are visible. Or stop at the one room schoolhouse at the Kelly Canyon turnoff for another angle. The south to north rise is unmistakable while the reverse is indicated on the map. Of course the hike is sublime and always worth it, that is best. 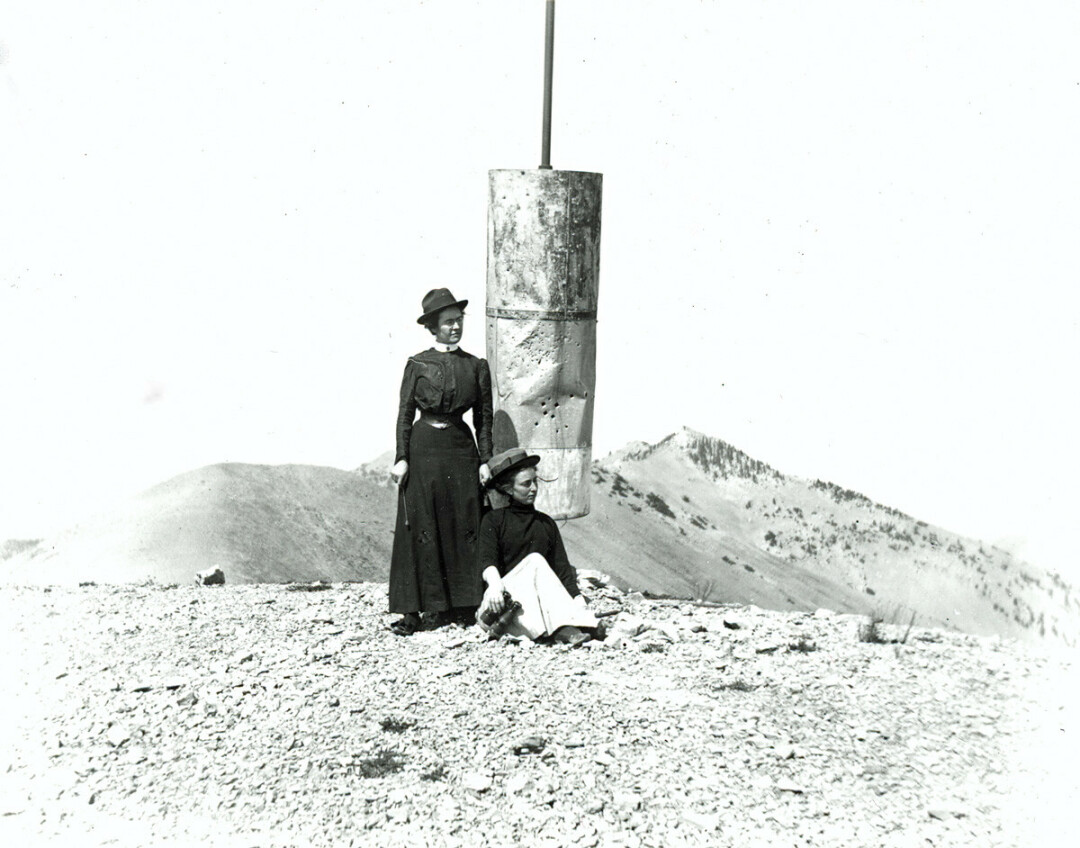 There is a photo at the Gallatin History Museum of two women at the summit of Baldy. No date is listed. The photo is among others that are dated in the early 1900’s. The summit is marked by a ten foot high pole with what looks like a flattened water heater stuck on it. That is what it is according to the caption. The women, one identified as possibly being Mrs. Alonzo Shook, are attired in ankle length dark Victorian dresses while wearing sporty looking fedoras. There is a peak in the background identified as “Mt Sacajawea”. The mountain is Bridger Peak and is definitely higher than the summit the women occupy.

Interestingly, the peak Google Earth labels as Baldy seems to be the last point on the ridge just north of Bridger Peak. Following the cursor elevations on the ridge in Google Earth reveals the same approximate heights that my GPS did. And tilting the range on edge in Google Earth shows the south to north elevation increase clearly. Over several years I have confirmed these readings with several different elevation and trail apps.

All of this is not vital or even very pertinent but it is interesting. It says something about perception. The peak we call Baldy is the first point on the ridge and very visible. The other peaks stack up behind it. Baldy is the traditional destination for local trail runners and hikers. The ridge trail goes right to the summit. The namesake peak of the Bridger Range, hidden from Bozeman, is higher, more rocky, and steep enough that the trail avoids it to the west. It does not quite reach 9000ft as do the signature peaks to the north but Bridger Peak is a true peak. Yet it is not visible from town. This has altered our perceptions of the Bridger Range and even the facts on the maps.

Spirit and Industry: The Montana State College Class of 1918…