What Is Love Field? 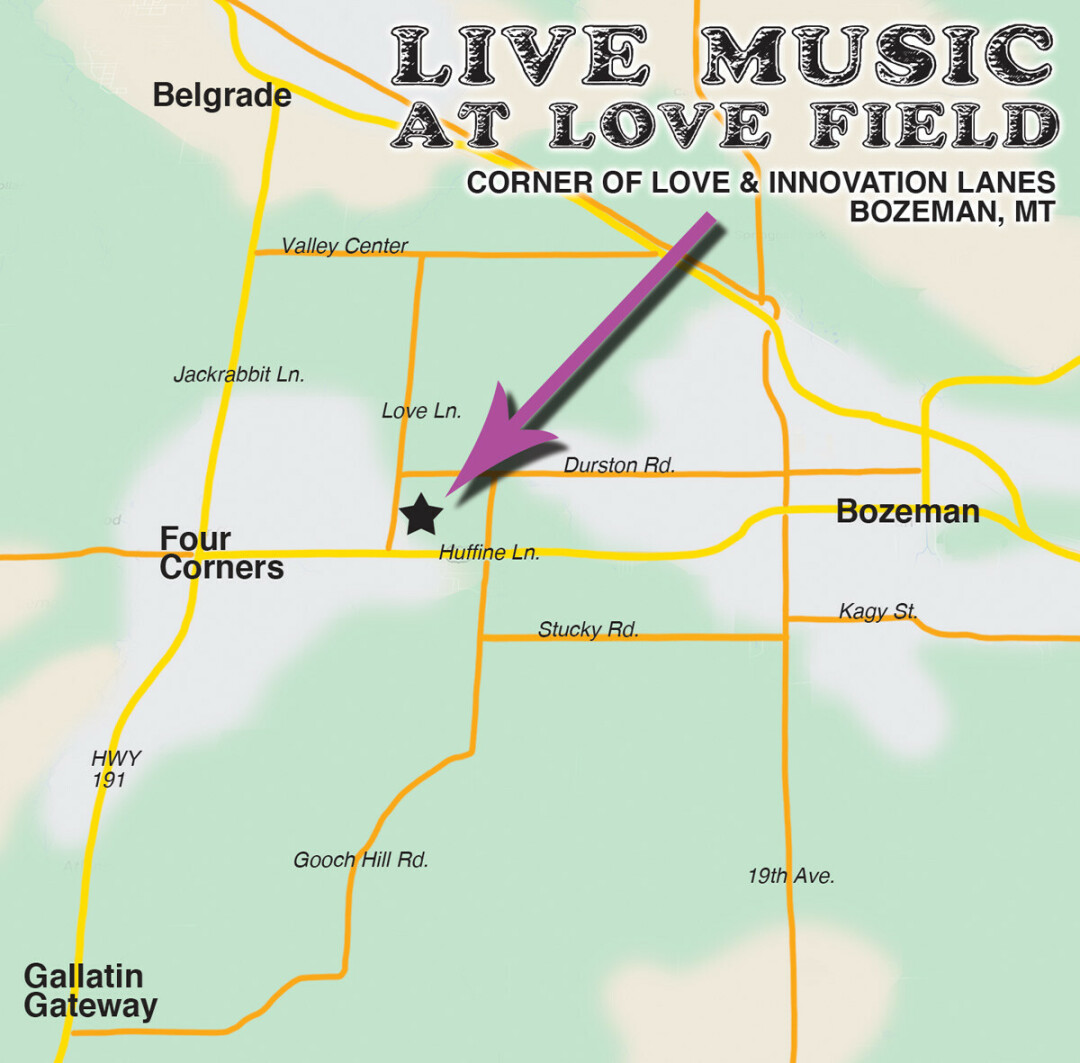 Live music is back in Bozeman! ChickenJam West Productions has a full slate of concerts this summer, including seven intimate outdoor concerts near the corner of Love Lane and Huffine Lane. “Love Field” is an outdoor space owned by Salient Technologies, a local creative product development firm.

Love Field is located at 5350 Love Lane Bozeman, MT 59718, at the old “King Tool” property for those old school Bozemanites who are familiar. This is an outdoor space with a gentle slope that is suitable for all ages and types of people, who want to dance up front or sit back and enjoy the show with their lawn chairs and blankets! Brought to you by ChickenJam West Productions, Moonlight Productions and Ripple Sound, there will be 7 excellent, eclectic concerts throughout July, August, and September 2021! Moonlight Productions will be providing a high end stage experience, and Ripple Sound is providing professional sound.

July 6th will be the first date of the series, as they host Veteran Delta Blues guitarist Tab Benoit and his band. Tab’s 1992 album, ‘Nice and Warm’, prompted comparisons to blues guitar heavyweights like Albert King, Albert Collins and even Jimi Hendrix. Tab began playing two-hundred and fifty shows a year, a schedule he has kept up for over twenty years. Joined by Fellow Whiskey Bayou Revue record label artist, Alastair Greene has been hailed as one of the best blues rock guitarists of his generation with his band drawing comparisons to Gov’t Mule, ZZ Top, and Cream.

Saturday, July 24th brings us the first of a run of great local acts with longtime Bozeman “gypsy soul” band Cole & The Thornes. Mountain-Island infused SOUL band, Cole & The Thornes are a funky eclectic group with sultry vocals, gypsy-jazz guitar, playful horn melodies, and reggae style ukulele. The Thornes bring infectious high energy with an uplifting empowering message people connect and groove to. Cole & The Thornes released their award winning album ‘Map Maker,’ in March of 2018, and are currently working on their second album to be released in the fall of 2021.

Established Rock/Americana band The Dusty Pockets headline at Love Field on August 19th. Their music explores genres from Blues to country, folk and soul. Brand new up and coming band Matt Wallin & His Nervous Breakdown kick off the night. When Matt Wallin is asked about his debut Album ‘Ravens’ he replies, “You know what I’m doing? I’m bringing country music to the Northern Border.” ‘Ravens’ highlights Matt’s rare ability to combine an honest narration of what it’s like being a hard working family man and confronting your inner demons in his 15 track debut that was released June 4th, 2021.

Paige & The Peoples Band brings us a killer party on August 21st. Paige And The People’s Band have quickly made a name for themselves as being one of Montana’s Premiere Musical acts. While the band themselves are a young group, only a few years old, members of PPB have been charming, captivating and blowing the collective minds of audiences throughout the United States for many years.

Renowned for his role in Jurassic 5, rapper Chali 2na returns to town for the first time in a few years on Friday, September 3rd. He is known for his bass-baritone and quick delivery rapping style.

Laney Lou & The Bird Dogs is safely one of Montana’s most popular musical acts and is capping off the summer series on Friday, September 10th. Montana’s favorite stomp-grass folk band, Laney Lou and the Bird Dogs, bring an unmatched energy and fun-loving spirit to the bluegrass and folk scene. Ryan Acker, recently relocated to Bozeman and well known as being in Minnesota’s The Last Revel, will be debuting his new folk trio to start the night!

All concerts start at 7 PM sharp, are all ages, and kids aged 10 and under do not require a ticket! See you this summer outside at 5350 Love Lane in Bozeman! All tickets are available at chickenjamwest.com.

Matt Wallin and his Nervous Breakdown