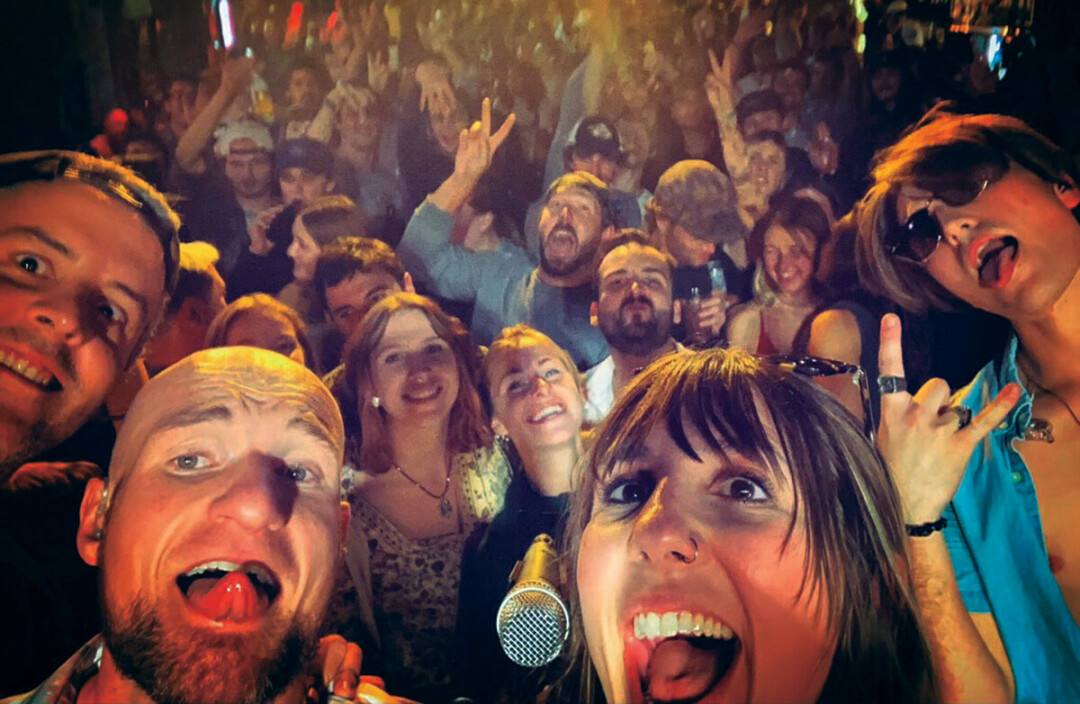 The twenty-something party crowd packed into local Bozeman venue El Camino on Main Street knows every word to this rock n’ roll anthem by The Killers and they aren’t shy about singing along boisterously, arms slung around shoulders or linked through elbows, uniting them all in a sea of harmonious camaraderie as they sway to and fro. At the front of the crowd, up on stage, stands a grinning Kristin Janis, lead singer of “Savvy.” The night is going well, very well by the looks of the crowd and their feel-good blissful vibe, and as the ringleader of all this happiness, Janis is taking it all in. Her grin encompasses her knowledge that this is just the beginning of something…something much larger than the four-piece traditional pop rock cover band she fronts. This is the beginning of a shared vision, a dream uniting Savvy’s followers with musical memories creating -as one fan put it “ a transfer of happiness to your fans.” Janis chooses this moment to gather the band on the stage and, with their backs to the crowd, they pose for a group selfie, the crowd going wild behind them. Yes, Savvy is livin’ the dream, and we are ALL invited to share in it.

As the Northwest’s newest up-and-coming party band, Savvy is drawing large followings throughout the region, playing events, venues and weddings as fast as they can book them. Kristin Janis and her band mate, drummer Adam Daffron, believe that a large part of Savvy’s success is something that they alone cannot take credit for. “We not only want to give the audience a great show and help them have a good time, we want to interact with them. We want the audience to know that we are grateful that they are supporting this dream. If they (the fans) weren’t there, we wouldn’t be able to achieve what we are achieving. We want them to know that they are a part of that dream. This is OUR dream,” explains Janis. “When I started off to create a band, I started looking for a drummer and I found Adam,” she says with clarity as though their meeting was meant-to-be. Together they became the driving force as founding members of Savvy, with Janis leading the direction musically and Daffron handling the business side. Savvy is not all the two created from that initial connection-sparks flew and as they collaborated together, they fell in love. The pair recently wed. 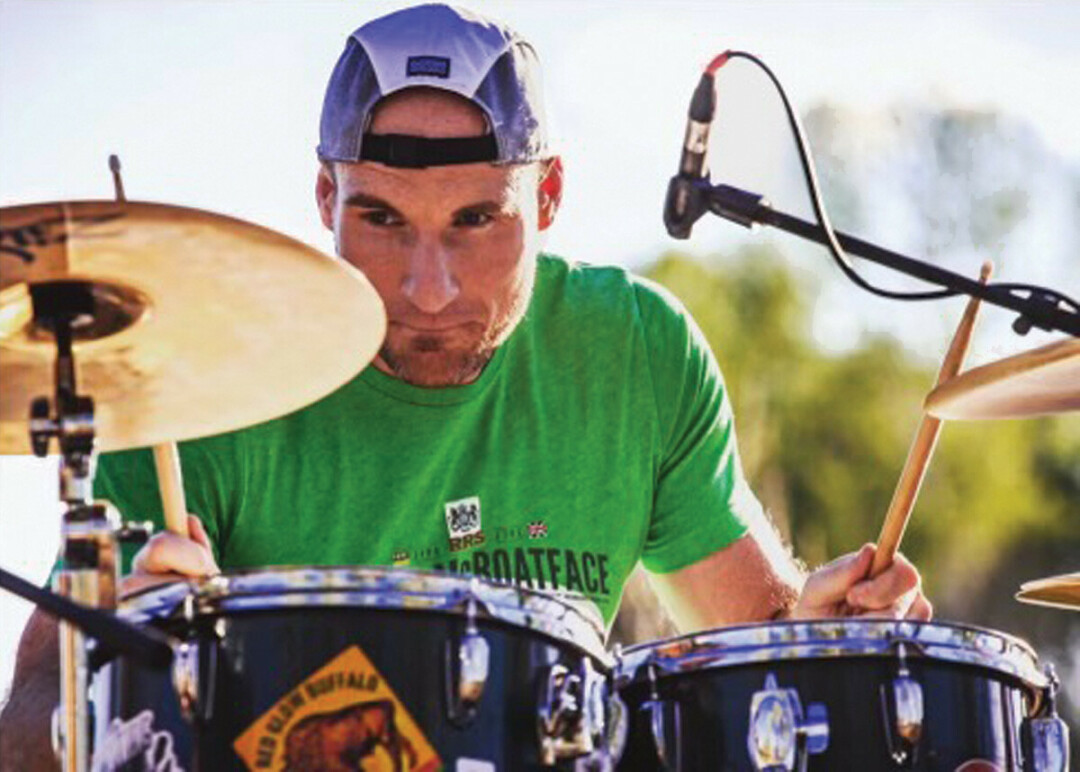 As for the secret of their appeal to a widely diverse audience ranging anywhere in age from 20-ish to 50 plus, that appeal becomes more than evident when Janis takes the stage. Her powerhouse vocals can handle any song from such varied artists as Prince to Katy Perry, Def Leppard to Lady Gaga and beyond, and she has the rock-star swagger to match her killer voice. When asked about her vocal training, Janis replies that she has had no formal training; she was born this way. “I was blessed with the pipes,” she says with a smile. Adam jumps in with this compliment to her gift, “Kristin has this raw talent. She operates on heart and passion. For me as a drummer, I have to strive be more systematic at what I do to get better but Kristin just improves on passion.”

In addition to her chameleon-like vocal range, Janis also plays guitar, something she taught herself to do in her teens. “My passion for music was heavily influenced by the band Veruca Salt. Nobody knows who they were, but they were a huge reason why I started playing music in my teenage years,” said Janis. (Veruca Salt = the female-fronted grunge rock band responsible for the 1994 hit “Seether.”) The fact that Savvy, like Veruca Salt, is also female-led is not lost on Savvy fans. “With Kristin being the lead, you don’t see that very commonly, a woman fronting a rock band. People really connect with that,” Daffron offers. And connecting with people is where it’s at for Savvy, connection being a central core theme of the band’s creation. Janis recalls, “We started talking and we both had this shared vision to start a cover band playing songs that we liked and no one locally was doing that. We wanted to play the music that we liked. We connected with and listened to people and the feedback was encouraging and it turns out that other people do want to hear the same kind of music we like! Yeah. There is a lot of Bluegrass, Folk, Country, Southern Rock bands around but not a lot of bands playing the stuff we like to play. Savvy plays the songs that people love that weren’t getting covered locally. 90’s tunes, pop tunes, big hits that everyone recognizes.”

“We don’t play songs just because we like them though,” Daffron interjects. “We play high energy songs that make our fans go crazy.” What songs make the cut? “Mr. Brightside!” they reply in united laughter. “The fans go crazy over that,” says Janis. She goes on to add, “Sweet Child O’ Mine.” We do a Lady Gaga song, Katy Perry, Alanis Morissette… The song has to be a big hit, danceable or a sing-a-long, preferably all three.” “I like “Sugar We’re Going Down” by Fallout Boy. That one always kills,” says Daffron. 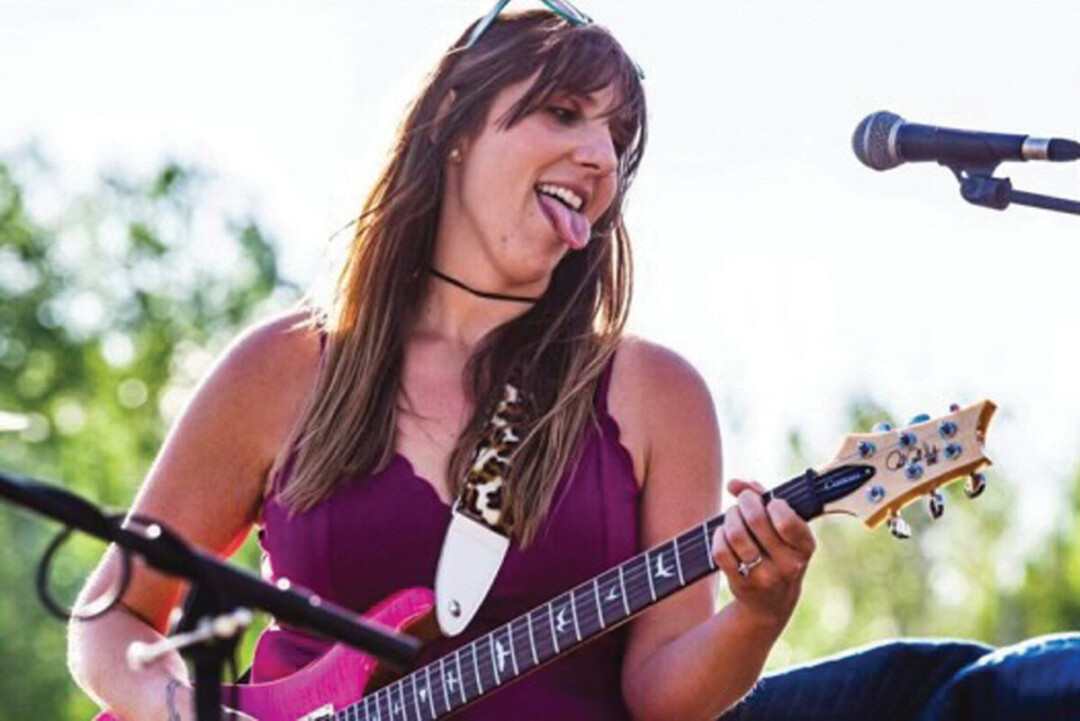 Whether Savvy is playing a smaller venue like their first live performance at The Haufbrau’s Open Mic in March of 2020 or a more recent performance at Catapalooza with thousands in attendance, Savvy’s desire to please their fans and share their dream remains the same. “People have come up to me at gigs with tears in their eyes to say ‘Oh thank you! You brought back so many memories.’ Savvy plays songs from the 80’s to today. We had a woman who we played for at a private event who came up to us just to thank us for playing music that she could actually connect to because it meant everything to her. We play the music that people want to hear,” Janis emphasizes.

You can catch Savvy live at venues like Tune Up in Bozeman’s Armory Hotel, El Camino and Tips Up in Big Sky. For more gig dates and other band news, find Savvy online at www.SavvytheBand.com. Also be on the lookout for a Janis/Daffron side project known as “The Heavy Petters.” Janis describes the musical style of “The Heavy Petters” as melodic rock while Daffron refers to the style as “dynamic and emotional.” Janis and Daffron are currently in the studio laying down tracks featuring this collaboration’s signature sound of catchy hooks and melodies contrasting with rockin’ guitars and heavy drums. For more info on the Heavy Petters debut album’s release date, check out www.TheHeavyPetters.com.

Between Savvy and The Heavy Petters, Janis and Daffron are not only crazy busy, but they are also in awe viewing the kismet-wrapped dream they envisioned as it materializes. Busy, but worth it in Janis’ opinion, “What’s transpiring now is not just because of all of Savvy’s hard work and dedication. This is above and beyond anything the band alone could have imagined. It is much bigger and we have our beautiful fans to thank for every minute of it.”

Kathleen Johns is a psychic who works with the energy of all beings past, present and future. For more info visit www.KathleenJohns.com

Matt Wallin and his Nervous Breakdown

What Is Love Field?