For many who grew up in mid-twentieth century Bozeman (or those familiar with local history), the name “Schlechten” is synonymous with photography. The unusual name brings to mind portraits, landscapes, and everything in between. Though certainly not the first professional photographers to operate in Bozeman, the Schlechten family dominated the local photography industry for over half a century. Between them all, this brother-father-son combo captured all aspects of Bozeman life on film for nearly eighty years.

Brothers Albert and Alfred Schlechten were born in Switzerland in 1876 and 1877, respectively. They emigrated to America in the 1890s and almost immediately began their work as photographers. Though still in their early 20s in 1900, the brothers list their occupations as photographers on the U.S. census that year. At the turn of the twentieth century, Albert and Alfred were snapping pictures in Centralia, Missouri, a small community west of St. Louis. They soon relocated to Bozeman, Montana, where they established the Schlechten Studio on East Main Street (where the Fechter Hotel building currently stands at 128-130 East Main). An ad in the 1902 Bozeman city directory refers to the Schlechten Brothers as “the leading photographers of Bozeman and Gallatin County.” 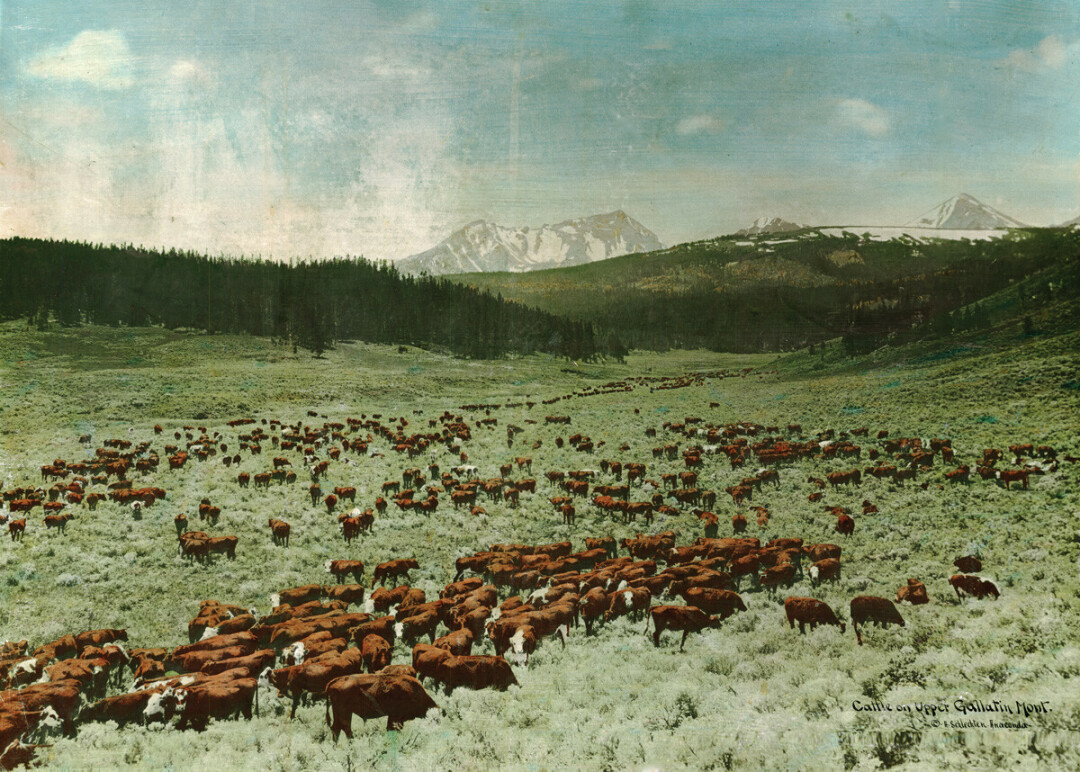 They must have done well. Within the next two years, Schlechten Studio moved again to a building on Black Avenue just south of Main Street, a location they used for nearly twenty years. Over the next half century, their studio also occupied space at 215 E. Main St., 19 South Willson Ave., and 216 South Grand Ave. The brothers had complementary interests. While Albert enjoyed taking landscape photos, his brother Alfred excelled in studio work. Between the two, Bozeman’s citizenry and surrounding countryside were well documented.

Albert Schlechten didn’t seem to mind toting heavy camera equipment up steep slopes and down embankments to get that perfect landscape shot. His photographs of Gallatin Canyon, sometimes hand-colored, provide glimpses of early 1900s southern Gallatin County. Two of Albert’s landscape images appeared in National Geographic magazine in 1917 – “A Clover Field in Montana,” and “A Ranch in Montana.” The Gallatin History Museum has an original hand-colored print of this latter image, which was taken near Cache Creek in the Gallatin Canyon. Albert recorded his own title for the photograph, “Cattle on Upper Gallatin, Mont,” in the lower right corner.

Besides photography, Albert enjoyed farming and for several years he tried his hand at raising wheat in the Gallatin Valley. This may explain why some of his well-known images seem to champion Gallatin Valley agriculture and feature neatly spaced shocks of grain framed by distant mountains. In the 1930s, Albert moved to Anaconda, where he opened a photography studio on West 3rd Street, which he operated for about ten years.

Alfred Schlechten exhibited the same talent indoors that his older brother Albert excelled at out-of-doors. Over his decades-long career, Alfred’s portrait photography captured the faces and personalities of hundreds of Bozeman residents. His well-composed studio shots are complete with painted backdrops, decorative furniture, and toy props for children. One of Alfred’s portrait chairs now resides in the Gallatin History Museum, along with a photograph of local poet Josephine Geyer. Geyer strikes a thoughtful pose in Alfred’s chair, although it is clear from looking at the piece of furniture that it was constructed with appearance in mind and not comfort. 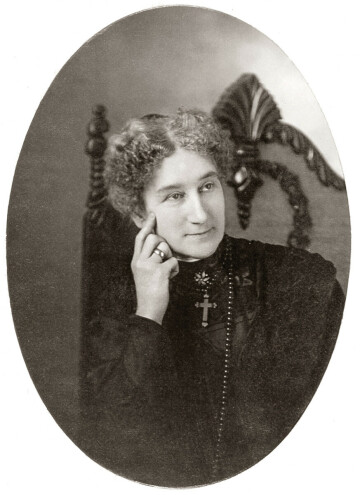 The photography gene passed to the next generation in 1911 when Alfred’s son Chris was born. He grew up in Bozeman on both sides of the camera, helping his father in the studio and taking pictures of himself and his friends. For nearly forty years, Chris took school portrait photos and class pictures of virtually every child in Bozeman, including his own. One beloved image in the Gallatin History Museum collection features his daughter Linda decked out in the neighbor boy’s football gear. Chris continued in his father’s and uncle’s footsteps, documenting the people, places and events of Bozeman. In addition to portraits, Chris photographed the Montana Winter Fair, school groups, and even some new building construction. He handled his own developing and print work from his home studio on South Grand Avenue. 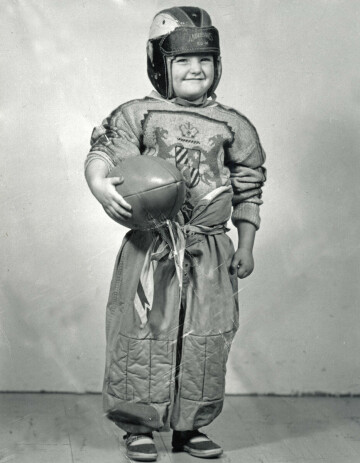 Perhaps Chris’s most famous (or infamous) project was the 1933 Montana State College annual. Now extremely rare and nationally recognized, this spoof yearbook was created by Chris Schlechten and his friend David Rivenes. They spent several years gathering ideas before they finally got their chance to implement their plan in 1933. Chris Schlechten had attended Montana State College in 1930 as a freshman, but by 1933 was working with his father Alfred in the family photography studio. Chris’s friend Dave Rivenes was a Junior that year at MSC and got himself elected as yearbook editor. According to a 1993 article in the Bozeman Daily Chronicle titled “A Grand Lampoon,” the rest of the yearbook staff believed they were working on a traditional publication and had no clue what was actually taking place.

The 1933 Montanan annual famously featured photographs of a fictional character named Clarence Mjork, who made dozens of appearances throughout the volume and posed with various student groups. Clever jokes filled the annual and nobody was spared ribbing. The book poked fun at college administration, student organizations, and sports teams. To create “Clarence Mjork,” Rivenes and Schlechten enlisted the help of one of their friends, who donned a scruffy beard, tattered coat, and an occasional cigar and glasses for photo shoots. Schlechten got creative with his photography and devised a way to add the images of Mjork over top of the official photographs he took – a 1930s “photoshop.” For example, on one page Clarence Mjork lounges next to female students at Hamilton Hall, and on another he closely examines the scalp of a member of the livestock judging team.

As one can imagine, College President Alfred Atkinson was irked, and student David Rivenes was almost expelled from Montana State. Rivenes graduated from MSC and moved to Eastern Montana where he later ran a television station. Chris Schlechten returned to his work at the family photo studio.

In the mid-1940s, Albert Schlechten retired and left Montana. He passed away at age 86 in Mesa, Arizona in 1962. Alfred continued his portrait and commercial photography work in Bozeman with his son Chris until well into the 1950s. He passed away at age 93 in Livingston, Montana in 1970. After decades working in the family photo business, Chris Schlechten passed away in 1979 at age 68. All three are buried in Bozeman’s Sunset Hills Cemetery. Their legacy remains strong today in the photo collections at the Museum of the Rockies and the Gallatin History Museum, and in countless local family photo albums.

Joseph Lindley and His Park