Joseph Lindley and His Park

These days, when one thinks of the Sweet Pea Festival, Lindley Park usually comes to mind. While the celebration is itself a Bozeman icon, so too is the popular city park that has been the Sweet Pea Festival’s home for the last 43 years. The original Sweet Pea Carnival began in 1906 and was developed as a signature summer event meant to draw tourists from far and wide to the small agricultural community of Bozeman. The celebration included sporting events, concerts, balls, elaborate decorations, and of course, a parade down Main Street.

Many of the popular early Sweet Pea Carnival events were held in Bogert’s Grove, one of Bozeman’s first city parks and the precursor to what we know today as Bogert Park. By the 1890s, Bogert’s Grove was a well-known campground and gathering place for group picnics, thanks to its abundant shade trees and proximity to Bozeman Creek. The Grove’s location near the heart of downtown made it the ideal spot for a public park, and a portion of the land on which Bogert Park sits today was formally acquired by the city of Bozeman in 1917. Bogert Park was named to honor Bozeman’s first mayor, John V. Bogert. 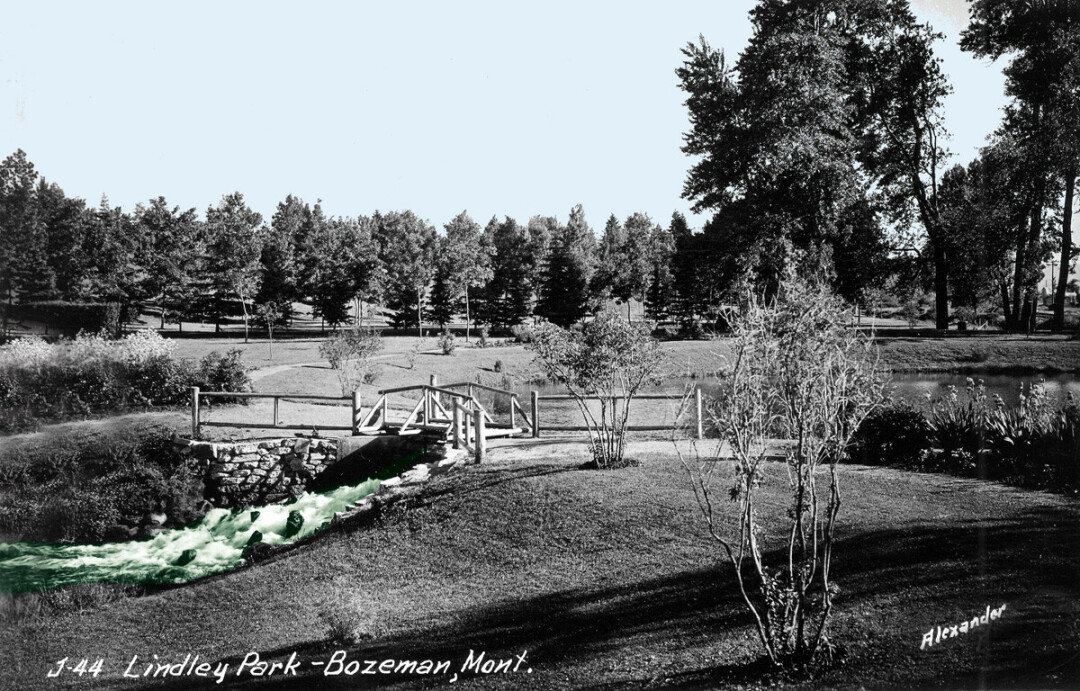 Lindley Park, as well as the street called Lindley Place, were both named for early Bozeman resident and businessman, Joseph M. Lindley. Lindley was born into a farming family in Indiana in about 1840. According to his obituary printed in the January 5, 1916 issue of the Weekly Courier newspaper, Lindley’s father died young and Joseph helped run the farm until he left home at age sixteen. Following a brief stay in Minnesota, Lindley attended college in Jacksonville, Illinois. He returned to farming after graduation, but a drought hindered his efforts and by the start of the Civil War in 1861, Lindley found himself living in the rough border state of Kansas.

On May 30, 1861, Joseph Lindley enlisted in the First Kansas Volunteer Infantry and served for four months in Company K. As part of the Union Army in a violent border state, the First Kansas Volunteer Infantry saw action almost immediately. Just over three months after his enlistment, on August 10, 1861, Lindley was struck by a bullet during the battle of Wilson’s Creek near Springfield, Missouri. Joseph recovered from his wound, although he carried the bullet for the rest of his life. Lindley was honorably discharged at the end of September 1861, after a total of four months served in the Union Army.

Ready for a change, Joseph Lindley headed further north and west. He worked for several years as a freighter, transporting goods between Nebraska, Denver, Salt Lake City, and Virginia City, Montana. Lindley soon recognized the potential for lucrative opportunities in southwest Montana during the gold rush of the 1860s and settled permanently in Montana in 1864. After a short stay in Virginia City, he moved to the Gallatin Valley, established a farm, and began a freighting business between Bozeman and Fort Benton. In 1871, he shifted his focus to livestock operations in what is today Park County. It is likely that this ranching venture put Lindley in close proximity to and in competition with Nelson Story, Sr., a powerful Montana cattle baron and Bozeman resident who had ranching interests near the Yellowstone River and in the Paradise Valley.

Through the years, both Lindley and Story were powerful forces in Bozeman government and civic life, and both owned considerable property. Often at odds with each other, their ongoing feud eventually led to legal hearings and lawsuits. Nelson Story’s son Thomas Byron Story described one incident in a 1945 letter: “Lindley owned the land on the southwest corner of Story and Church where the ice pond was located. Story wanted to divert water from Sour Dough Creek to his Mill Creek to operate his mill, so without Lindley’s knowledge or consent, he cut a number of big cottonwood trees, and dammed the creek on Lindley’s property. Lindley had Pratt the blacksmith (later well known as Justice of the Peace Judge Pratt) make a ‘bomb’ of a type which was supposed to explode and blow out the dam, but it failed to explode, and Nelson chained it to a telephone post in front of the Bozeman Flour Mill office which was on the northwest corner of Main and Black. Lindley kept writing threatening letters to Story and these Story would post on a bulletin board which he erected on the same post. When Lindley came along and stopped to read his letters Nelson threw water from the front window over Joe.”

Tensions escalated and eventually became physical. Thomas Byron Story related another incident: “Joe [Joseph Lindley] came along and NS [Nelson Story] stepped out and whacked him between the eyes with the muzzle end of an old six gun…” According to the story, Joseph fled across Main Street, through a shop, and out the back door to the alley. Lindley’s well-publicized and ugly letters to Story soon led to legal trouble and his sanity was called into question. Ultimately, both men paid fines and Lindley spent a few days in jail but was acquitted of the insanity charge. An interesting twist to the Lindley-Story relationship occurred eighty years later. In 1984, a Jim Dolan sculpture of Nelson Story on horseback was installed on the north edge of the popular Bozeman city park named for Joseph Lindley.

Lindley spent the last thirty years of his life working primarily in the real estate and insurance business. According to Bozeman city directories, he also operated a cement block manufacturing company on East Main Street starting in about 1907. He took part in platting Lindley and Guy’s Addition to the City of Bozeman in 1880, an area centered around the street called Lindley Place, which today forms the core of the Lindley Place Historic District. Joseph Lindley constructed the two large homes which still stand today on the southeast and southwest corners of Lindley Place and East Olive Street. The impressive brick home at 202 Lindley Place was constructed first, in about 1892. An iron hitching post in the shape of a horse’s head, manufactured in Minneapolis, still stands at the ready near the street. The house across the way at 201 Lindley Place was built in about 1904, and replaced an earlier, smaller home which Lindley had previously constructed in the 1880s.

Joseph Lindley passed away on December 29, 1915, but his gravestone erroneously records his death year as 1916. He is buried next to his wife Rachel in Sunset Hills Cemetery in Bozeman, adjacent to the city park that bears his name. On December 2, 1920, the Bozeman City Council passed and adopted Ordinance No. 515, which formally established Lindley Park. Much of the land that formed the park was acquired from Joseph Lindley’s estate, although a small tract came from Louis Ray Taylor and Mary Henrietta Ray. The council voted to name the park in honor of Lindley. Joseph Lindley no doubt participated in and enjoyed the original Sweet Pea Carnival before his death in 1915. He would undoubtedly be amazed with today’s event, enjoyed by so many in a city park named for him.