Bozeman author Wayne Edwards has always striven for excellence, whether it was competing during his sports career, practicing dentistry, running a rural bank—or writing across multiple genres in his retirement. “It’s the way you approach life in general,” he comments. “You learn things from sports: how to be a teammate, how to work with others; that’s a huge thing that transfers, along with responsibility, accountability, discipline and hard work.” Meeting for a chat, he tells me those lessons have benefitted him more in business than they have in writing. “When it comes to writing, I’m not very disciplined; when I get on a roll, I might write from 9:00 pm – 3:30 am, then maybe not again for two weeks. I write for fun, to keep busy and do something I enjoy.” 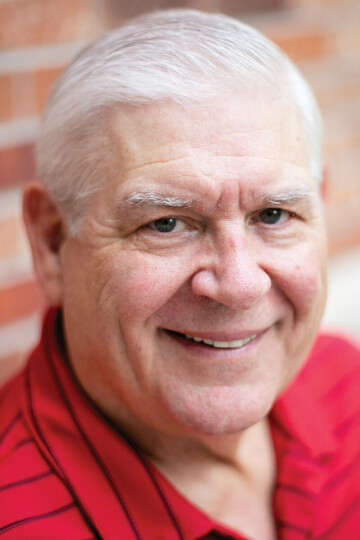 You notice his hands, the left one holding a pen with which he’s making notes on his latest manuscript; they’re large hands, smooth and composed—not gesturing about. Hands that have operated farm and ranch equipment, carried a football for the MSU Bobcats, been gloved inside people’s mouths, shaken on loan agreements, and held newborn children and grandchildren. There’s a steadiness in his demeanor; his posture is nearly perfect, his neatly combed white hair sets off the grey Carhartt shirt he’s wearing. “I’m not in this to make a million bucks,” he continues. “I’m doing something I’ve always wanted to do.” Yet, he admits he’s a competitive person. “I’m not on an absolute mission, but I want to write good books and am hopeful that folks will enjoy the read.”

Besides, he kind of wants to make his sister, Colleen, and Linda Hassinger, his high school English teacher, proud. “I always liked writing,” he tells me. “Linda and I later became friends; we would exchange handwritten letters and humorous notes; we had a lot of fun in the ‘90s writing Happenings Around Town.” At one point Linda told him, “I’ve been an English teacher for 50 years, and you need to write.” “That got me started thinking on the idea,” says Edwards, who loved Stanley Gordon West’s Blind Your Ponies, which came out around 2001. “I thought; ‘he comes from an even smaller town (Willow Creek) than I do. Maybe I could write something that would be interesting to some people.’”

Based on reviews of his first novel, Pacer Coulee Chronicles, about the 1990 football and girls’ basketball seasons in the fictional Montana town of Pacer Coulee, Edwards has written something that interests many people. In mulling over the project, he applied the adage of ‘writing what you know.’ What Edwards knows is small (really small), rural towns. Growing up on 80 acres in Denton, a hamlet of about 300 in central Montana where his father ran a few head of cattle as a hobby, he worked for farmers and ranchers in the summers from sixth grade on. That’s where he learned to mow, rake and stack hay, and run a John Deere 14-foot header combine (now they’re 45 feet). He knows first-hand the changes that have occurred in rural small-town America over the past five to six decades, and he captures them adeptly in ‘Pacer,’ which was also inspired by events from his athletic playing and coaching days.

A three-sport standout at Denton High School, Edwards attended Montana State University on a football scholarship, where he was twice an All Big Sky Conference Running back. He graduated with a pre-med/chemistry degree in 1975, then received his Doctorate of Dental Surgery from the University of Washington in 1980. He returned to Bozeman, where he practiced dentistry until 1986, when a medical condition forced an early retirement from that profession. He then relocated to Denton, where he joined his father in the Edwards family bank—started by his grandfather in 1929. “That was a pretty interesting piece of history,” he remarks (this was before the Federal regulation of banking—as a result, a bank sprang up in every little town across the country).

“I found a newspaper article of my grandpa’s that listed the banks before and after the stock market crash. There had been 34 banks in Fergus County, but the population was still no more than 10,000. Denton was organized in 1912 or 13; by 1925, damn near 1000 people lived there; now, there are about 200,” he says. After the depression, 30 of 34 banks had collapsed. “It was the beginning of the ‘dirty thirties,’ relates Edwards. There were terrible droughts, and ag took a horrific beating.” Almost exactly a year after Wayne had begun working at the bank, his father died, and Edwards found himself the President and owner of Farmers State Bank, where he spent the rest of his working career. “I had to learn pretty quick,” he says. He also ‘got roped’ into coaching Denton High School’s eight-man football team, where over the next six years the Trojans compiled a 52-6 record and played for two State Championships. “I don’t know if I’ve ever had more fun than I had coaching those young men for those six years,” he says emphatically.

Edwards had married his college sweetheart, Lorinda, and the couple have three daughters and now enjoy eight grandchildren. “After being dominated by women, I now have five grandsons, so I’ve got a couple of comrades,” laughs Edwards (who, by the way, has a radio-worthy speaking voice). Besides the initial goading from his former English teacher, Edwards was encouraged by his three daughters to write a children’s book. Their bedtime story about Buster, the Bridger Mountain Bear, illustrated by local artist, Gina Daws, is slated for release this month as both an e-book and a print edition. 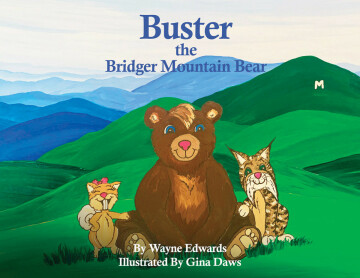 Edwards’ forthcoming young adult novel is A Stone’s Throw; intended for middle-graders and young adults. It chronicles a twelve-year-old girl who is shuttled from a San Francisco orphanage to an eastern Montana ranch to live with a grandfather she has never met. “I’m not really sure where I dreamed that up,” he says. “I was thinking about writing another book, and had decided I’d stay with a small town, rural community theme. I wanted to go back to about the 1960s, when I was in school and growing up. I’m especially close to my oldest granddaughter, so I thought it would be cool to use her age and to use the grandpa (though he points out that the fictional characters’ relationship is ‘totally different from the way we connect’). “I thought I’d create a little conflict that put them both into an uncomfortable zone.”

Edwards came up with book’s title from one of the lines in the last part of Pacer Coulee Chronicles. “I’m talking about where a character lived in Four Corners… his house was just ‘a stone’s throw’ from the cabin where his family had vacationed. It struck me as a good title, since my protagonists’ names are Ira and Maggie Stone. Like most WWI vets, Ira holds his feelings pretty close to the vest; he’s been kicking himself in the butt for the way he treated his daughter (who became pregnant with Maggie out of wedlock and subsequently suffers from an undiagnosed mental condition). I have the final chapter, though I’m only halfway through the book.”

A longtime fan of noted western sketch artist, Don Greytak (“I had many of his works in my home and prominently displayed in our bank,” he recalls), Edwards became friends with the artist on Facebook and found that Greytak is still actively drawing in his 80s. He asked if Greytak would be interested in doing the book cover for A Stone’s Throw. When Greytak agreed, Edwards’ middle daughter suggested he ask whether the artist would consider chapter illustrations as well. The result: detailed, era-specific pencil drawings reminiscent of Norman Rockwell’s work introduce a number of ‘AST’ chapters. “It was icing on the cake to have a guy of his caliber do the work,” says Edwards. “It’s the thing I’m happiest about, since I’ve admired his work for so long.”

As he’d done with Pacer Coulee Chronicles, Edwards began A Stone’s Throw with chapters he had in mind, rather than from the beginning. “Lying in bed at night, I thought about the scene with the skunk, and the chicken coop adventure… I kind of tied it to my growing up and working on farms. The roles between girls and boys in the 1960s were very clear: a boy would have been doing farm work, a girl would have been doing housework. There were several instances in my growing up when a family didn’t have sons, so the girls would be driving combines.”

While his days of farm and ranch work are long behind him, Edwards brings the values he learned through those experiences to his new endeavor, preferring creativity to the golf course. He used to enjoy reading crime, mystery and suspense novels, along with western history, especially Zane Grey. “I liked Louis L’amour when I was a kid. I also like John Grisham and David Balducci—but frankly, since I’ve started writing, I don’t read as much as I used to.” And though he used to fish and bird hunt Huns (Hungarian partridges) and grouse, Edwards never got into hunting elk. “They’re so majestic, I don’t think I could squeeze the trigger.”

Fortunately, he has squeezed the trigger on his newfound talent and is pumping the action; readers can find his two published books in the Bozeman and Belgrade public libraries, on his website (wayneedwardsbooks.com), at Barnes & Noble, and on Amazon. A Stone’s Throw should debut in early 2022.

One Book One Bozeman Title Announced