Author Mark Sullivan and I are sitting in a coffee shop here in Bozeman discussing his upcoming novel The Last Green Valley. Of all the words I would have chosen to describe this novel – or any novel, really – my mind would not have gone to these four, specifically, at least not outright. Yet Sullivan insists that is the criteria for how he would construct his novel, and as I listen to the man, I cannot help but wonder if there is not some mad genius behind these particular words, behind the thought process that brought the very essence of the story to life.

Coming in hot off the success of his previous novel Beneath a Scarlet Sky, Sullivan delivers another emotional and gut-wrenching story in The Last Green Valley that is one part adventure, one part historical, and all parts enthralling. There is a certain gravitas that pulls the reader deep between the covers of the book, deeper still into the very fabric of the story. Both of his recent novels, Beneath a Scarlet Sky as well as The Last Green Valley, bear a solid weight and responsibility to their respective portions of World War II, as well as the particular place in history that is represented by the characters and their life stories.

Sullivan tells me, “There was a significant amount of research for both novels. With the entirety of World War II, the stories offered such rich terrain, just these stories of regular and ordinary people up against astronomical stakes. You really don’t want to screw that story up.”

Sullivan continues, telling me that he had been presenting his story Beneath a Scarlet Sky at a local Rotary Club meeting and people were telling him that he was never going to find another story like this in his lifetime. He said, “I remember thinking, Yes, I will. I just have to look hard enough for it.”

Perhaps that was the motivated thinking, perhaps it was the karma, that led him to his next story of adventure detailed in The Last Green Valley. Sullivan tells me that his inbox was near flooded with people wanting to tell him a similar story of their family and the epic struggles they endured. Ultimately, it was a retired dentist who would turn Sullivan on to the idea of the story for the novel that would become The Last Green Valley.

It was not but a few days later that Sullivan put Bill Martel’s family address into his GPS and found that the two men lived only a few miles apart. He tells me, “You know within the span of a ten-minute drive I was ready to investigate a new story, and within an hour of meeting Martel I was absolutely hooked.” 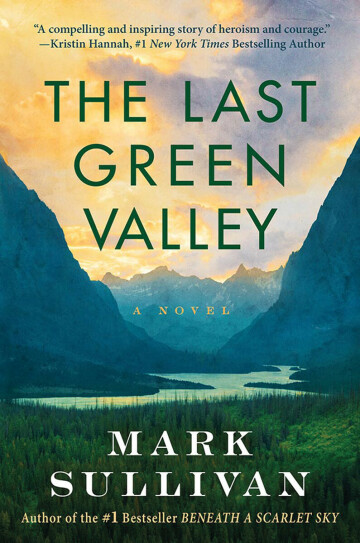 Sullivan continues, “As I was writing this story, as I began doing the research, it immediately became apparent as to how powerful this story was, and just how magnificent a tale it really was.”

When I ask him about the style for these novels versus the style he had used in his previous novels, Sullivan tells me that it was absolutely a turnabout and a complete one-eighty when it came to writing them. He says, “It was definitely a vibe that didn’t come naturally. It is easier to write darker stories. Writing a story of hope, most especially given the times we are currently in, it reminds me that people are more capable than they think they are.”

He tells me it was a style that he was not used to, and it certainly required no small amount of effort on his part to get inside the minds and hearts of the people he is working to portray, to truly understand the setting. “It was an extremely hard-won skill.”

The Last Green Valley details, in no small feat, the harrowing journey of the Martel family who – during the waning days of World War II – had been living in Ukraine. Young Adeline and Emil Martel are as ordinary a couple as history would think. Being raised in a totalitarian society, Emil makes it a point to not be noticed by the authorities. This is a method of camouflage and survival that has allowed his family to farm in Ukraine for generations.

It is March of 1944 and the war is ending. The Martel family is forced to make a terrible decision. Do they remain on the homestead they have literally built with their own hands, maybe go overlooked by the advancing Soviet army, perhaps risk being sent to labor camps in Siberia? Or do they follow the retreating Nazi army back to Germany, those murderous thugs who have pledged their protection to all pureblood German families? Ultimately, the Martel family makes the most difficult of decisions to abandon their homestead, pack up all their most important worldly possessions into a single horse-drawn cart, and set out to get out of the way of two warring factions.

When I asked him if it was painful for either him, as the investigator, or for Martel to recount this story, Sullivan says, “I think that Bill (Martel) recognized that it was a tough story, but I think he also knew just how cathartic it was.”

What began with a series of interviews with the family quickly launched itself into a full-blown adventure for the author. Not long after meeting Martel, Sullivan found himself on a plane, with Martel, as they flew to Bucharest, Romania, in a concerted effort to pick up the trail of his family’s extraordinary journey to their own paradise and green valley.

In Bucharest, Sullivan arranged for a local guide to help him and Martel meet up with as many survivors and witnesses to the events lined out in the book. Sullivan tells me, “It was going to be these witnesses that would radiate a unique soul to the story.”

From Romania, they traveled by train to Budapest, and then to Ukraine. It was in the city of Poltava, Ukraine, where Martel was able to confront a stark reality of his family while touring a museum with Sullivan. It also becomes kismet when Martel learns that there is a connection between himself and the museum director by way of their respective parents. It was the very basement of that museum that became a focal point of the journey and as Sullivan recounts, “A pivotal moment of emotional power,” for the Martel family.

Departing Poltava, Sullivan, and 8o-year-old Martel began an arduous seven-hour journey over barely developed cattle trails and logging roads to the ruins of the family homestead. Sullivan recounts the emotional impact, “To be able to see this man come full circle in his life…” His voice trails off as he recounts this part of the story and while I think that I can fully grasp the emotional punch of the statement, I am still left choked up. Neither of us say anything for a moment.

Martel tells Sullivan that his father was not necessarily a man of faith, but the experience of his family’s trek has literally transformed him, and he comes out as a deeply spiritual man. A once quiet and unassuming farmer who was forced to take immense risks to ensure the safety and survival of his family.

As Sullivan continues to enthrall me with the story of, as he says, “insane hardships and failure,” I am reminded that The Last Green Valley does indeed represent a philosophy of life, the ability to be resilient and relentless. It is a story that can change the lives of others not just in the substance but also in the telling. There is a very tangible idea of being able to overcome the obstacle in front of you and achieving the dream of what could be.

Coming back to the original four words – moving, inspiring, healing, transforming – I realize that it might not be a mad science after all, but rather the mantra of an author who “gets it.” Sullivan uses his worldly experience to tap into the psyche of not just the interview subjects on whom the story is based, but to weave together a narrative that is both compelling as well as shocking. There is a literal and visceral reaction to the scenes described in the story of the Martel family that cannot be easily overlooked or so casually glossed over. Perhaps this is where the true value and the power of the story lies. There is a distinct authenticity that overshadows any precept of a fictional novel and it decidedly shows through on the pages of the novel.

Mark Sullivan tells me that he came out of college determined that he was not going to have a typical corporate job. Perhaps this was what drew him to the Peace Corps, ultimately to him being posted to Africa. Sullivan confirms that it was this experience that opened his eyes to a larger world around him. Perhaps that was how the stories evolved for both Beneath a Scarlet Sky and The Last Green Valley, that there was a world vastly greater than what we are oftentimes acutely aware of.

Sullivan’s accolades can hardly be distilled down into a single narrative as each novel that he has worked on presented its own unique adventure. Whether it has been research on his last two novels or writing with acclaimed author James Patterson, there is certainly no room for anything to be done part way. As our time in the coffee shop draws to a close, I can sense a raw magnetism and hunger about the man that belies the casual hiking clothes he sports. There is an aspect of a hunter stalking his prey that I gather about the man.

Sullivan is not content to rest on his laurels, either. With the release of The Last Green Valley but a few short days away, he is already working on his next project. I asked when we can expect to see it, but he assures me we are still a few years out on that one.

Says Sullivan, “While the previous two novels, in essence, fell into my lap for the tone of the World War II stories, this next one will be a radical departure from that. Rest assured, though, that this will be a story where the characters, as well as myself, will go in deep and come out with our humanity intact.”

However, with a tentative title in place and the story of child soldiers in Uganda, Sullivan assures me that it will ultimately be a story of dark turning to light, and characters coming out with their humanity intact. Perhaps Sullivan has not strayed so far from the stories he set the stage for as he would have thought.

Patrik Hill is a freelance writer as well as the owner and content creator for "Echo Eight Group" and "Mobster Poet."

One Book One Bozeman Title Announced