This month, Bozeman residents have the opportunity to attend a performance of Angels in America, Part 1: Millennium Approaches. Debuting for the first time in Montana, the Broadway hit from award-winning playwright Tony Kushner, directed by longtime Bozeman theater actor, director, and producer, Cara Wilder, will be performed weekends March 11- 20 in The Emerson’s Crawford Theater. Kushner’s two-part production has won several awards, including a Tony for best play in 1992, and a Pulitzer Prize for drama in 1993. Revived for Broadway in 2017, the play featured outstanding performances by Andrew Garfield and Nathan Lane.

Set in mid-1980s New York, Angels in America explores AIDS, homosexuality, Reagan-era politics, and religion through the eyes of several characters whose storylines intermingle over time. A gay man, Prior Walter, is diagnosed with AIDS and left to cope with his condition, receiving support solely from his friend Belize, an ex-drag queen and a hospital nurse. While this is going on, we follow another character, Joe Pitt, a man who is married, a Mormon, and a Republican clerk. He begins working in the same office as Louis Ironson, under the mentorship of Roy Cohn, a fictional representation of the late Republican lawyer. Over time, true identities and feelings start spilling from everyone’s closed doors, leading to complicated relationships and raw self-realizations. Kushner’s themes discuss community, identity, and stasis during a time when social and political discourse surrounding homosexuality was rapidly shifting.

Despite grappling with a very intense and heartbreaking subject, the production possesses both magical and comedic charm, including the presence of supernatural, angelic entities. Wilder mentions that the magical elements require a sort of “technical wizardry,” which will contribute to the play’s “youthful spirit,” certainly a quality we all need while dealing with a global pandemic. This production could not be more timely. The AIDS epidemic is similar to the COVID-19 pandemic in that politics and personal relationships are largely at odds with each other. Throughout this pandemic, we have been devastated by broken relationships, loss, loneliness, and a government that doesn’t always hear our cries for help. At its worst, those affected by the AIDS epidemic were left without substantial medical attention and support because of oppressive political and religious forces that actively hushed the crisis. 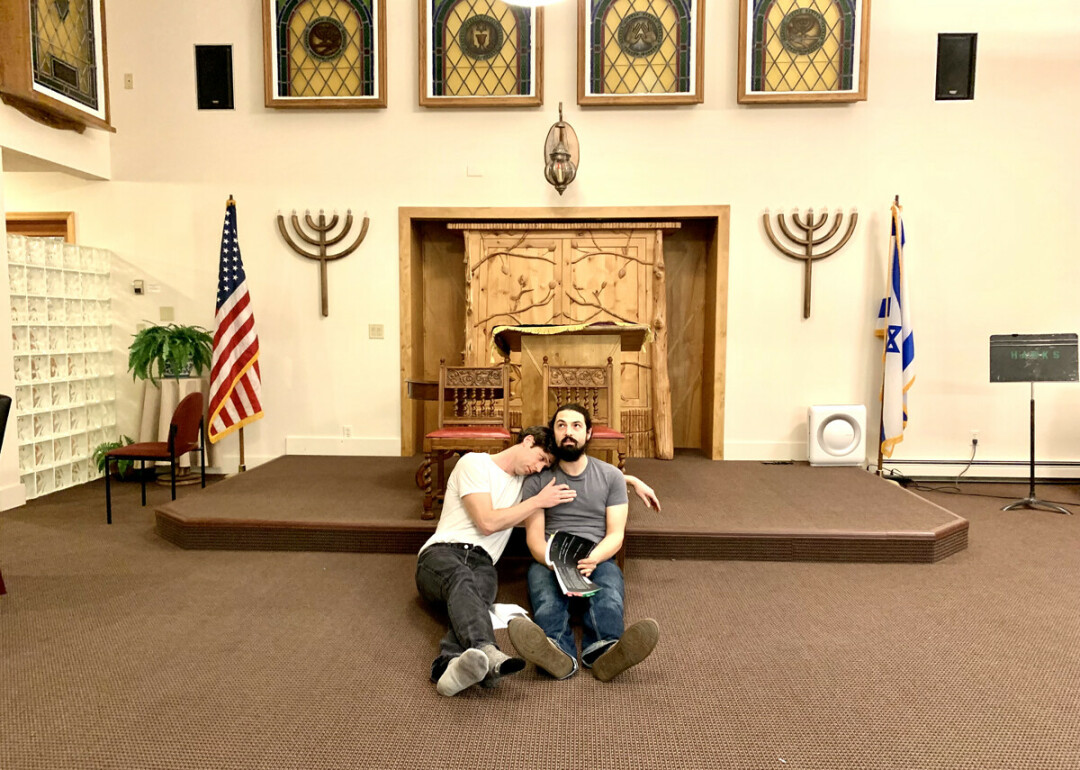 Part 1 of Angels in America features eight actors playing the role of sixteen characters. Fortunately for the Bozeman production, fourteen actors fill the different roles, which, Wilder says, “has allowed a broader opportunity for area actors and more time for in-depth character exploration.” Aaron Murtaugh plays Prior, a complex character quite different from his own identity. “I’m a quiet, laid back, new dad,” says Aaron. “Prior is tough, sharp and combative, and always has something to say,” he adds. Despite these differences, he’s taken on the challenge with excitement, and feels humbled by the experience so far.

Jenna Ciralli, who grew up in Great Falls, plays Joe Pitt’s wife, Harper, who struggles with addiction and agoraphobia. Like Tony Kushner, Ciralli believes that pitying the characters ignores the meaning of the play. “He is setting this intention that we don’t pity those who have AIDS, but we see beauty and strength and resilience in them. We remember those we’ve lost, but honor those who have lived on, and we see it as an integrative web, not something that’s black and white. There’s honor to these characters, and there’s a fight,” she says. 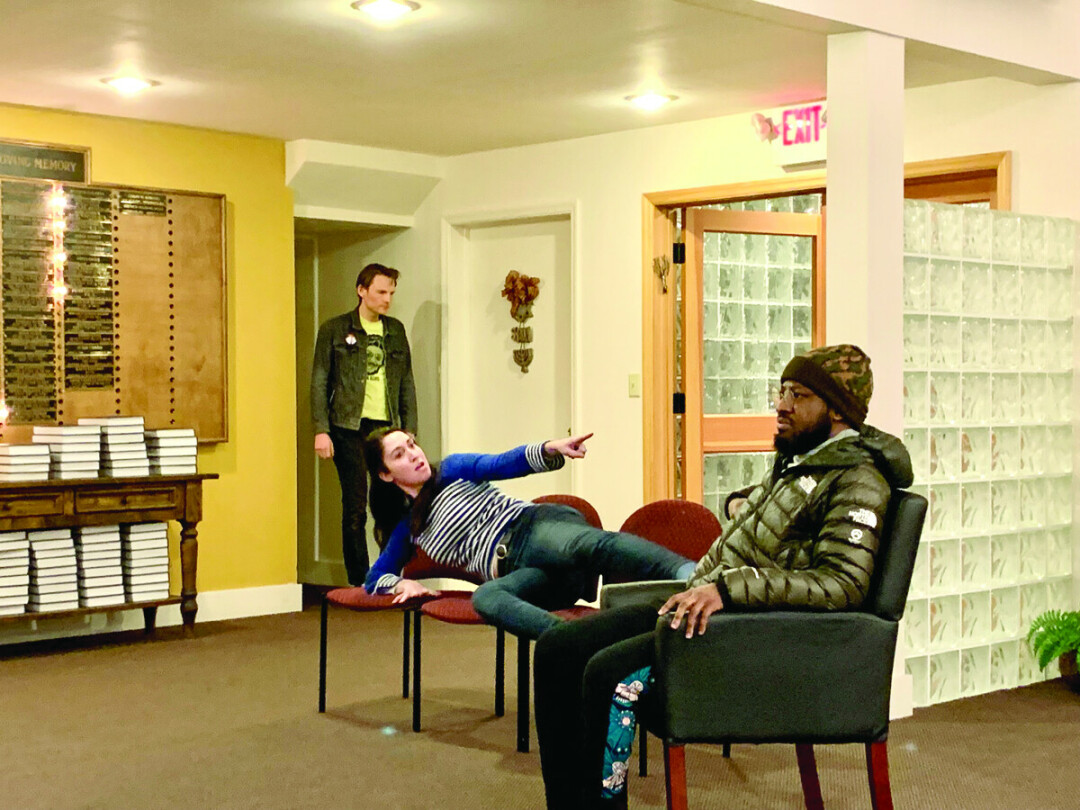 An Awareness Event that supports the wider LGBTQ+ community will be held alongside the production. Before each performance and during intermission, representatives from local organizations will be on hand to educate attendees about the importance of supporting members of the queer community. This is an opportunity for Bozeman residents to amplify the voices of marginalized groups, especially in a political climate which targets queer community members. Recent policy passed by the Montana State legislature specifically affects the lives of transgender Montanans, including a bill that bans transgender athletes from competing in school and university sports teams if they don’t correlate with the athlete’s biological sex. Angels in America touches on similar sociopolitical conversations that marginalize and limit opportunities for members of the queer community, and change is often met with resistance.

Hopefully, as the pandemic winds down, productions like this one won’t be as few and far between. Speaking of which, the Angels in America crew is considering mounting Part 2: Perestroika sometime in the near future. Inviting conversations about marginalization, diversity, and inclusion generates acceptance and understanding among community members. As we’ve learned from this pandemic, reckoning with the changes of the time and within ourselves is key to adapting and pushing through to the end. Angels in America, Part 1: Millennium Approaches focuses heavily on these themes with some tears, chuckles, and magic that promise to leave the audience with a glimmer of hope in their eyes towards the future of the human condition.

Advance tickets ($12 - $22) are available at www.eventbrite.com. Tickets will be $25 at the door on performance nights as available. Due to strong language and adult situations, this play is recommended for ages 16+. Presented by a grassroots team of Bozeman and Livingston theater artists, monetary and in-kind support is appreciated to offset production costs. For information on making a donation towards this production, please contact Cara Wilder at wilder1world@gmail.com

Colleen Angarone is a senior at MSU completing an English-Writing major. She is particularly interested in Women and Gender Studies and Southeastern Asian culture, and plans to teach English in Japan one day.