Last summer I drove into Fishtail, Montana, an unincorporated small town located in a wide spot in the road south of Columbus. On this sweltering hot afternoon, the tiny town was still and quiet, biding its time for the sun to go down and the heat to fade. I’d come to watch “Cymbeline” that evening, and it was not readily apparent where an audience would come from, as there were only a few scattered farms and ranches around the edges of the town. I wondered if I might be among the very few who would come out to see this performance in the park, considering the heat and the remoteness of this place. But with little warning, several motorcycles roared past, cars came out of nowhere, and a steady flow of people arrived, blankets and chairs under their arms, until the green park was filled from front to back and from side to side with people shoulder to shoulder, eager and excited to see the famous Montana Shakespeare in the Parks. When Erik Pearson, one of MSIP’s actors, took the stage ten minutes before showtime to welcome the audience and invite them to settle in for the performance, the audience gave a standing ovation, happy to have live theatre back again. 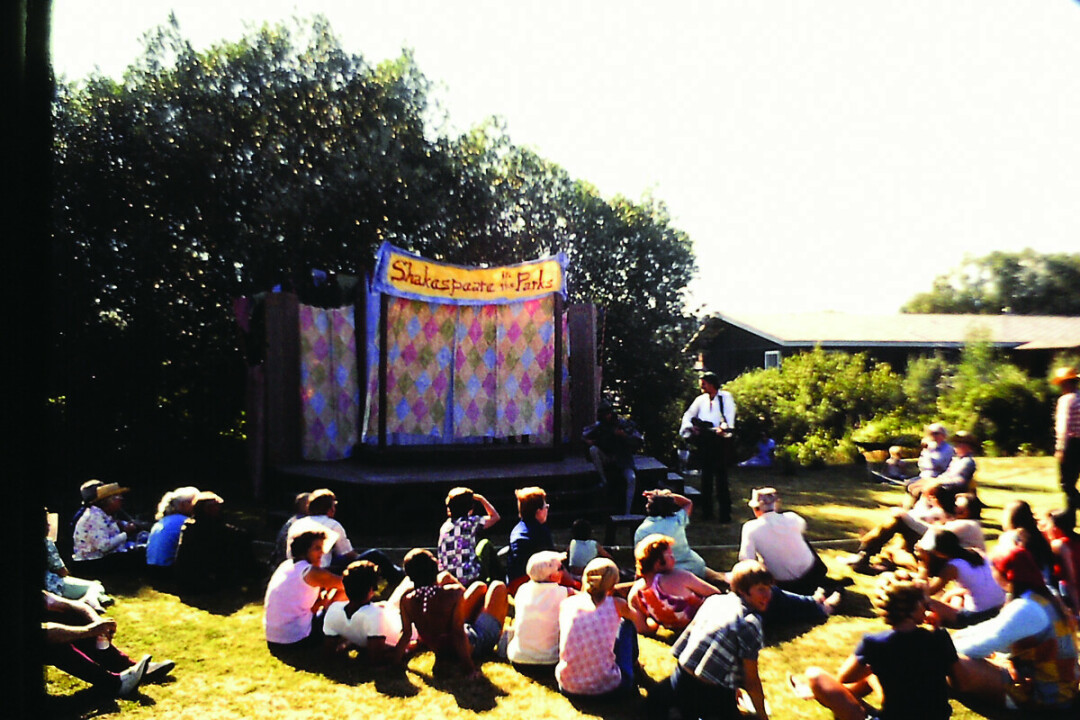 This scene has been repeated over and over for fifty years. MSIP began as a small Montana State University outreach for the Bozeman community and seven neighboring towns in 1973. It has grown into a performing arts company that today has five full-time employees and an annual budget of over 1.25 million dollars, tours year-round to five states, hires about 40 professional actors each year, and has reached nearly one million audience members. Those first 11 or 12 community members and university students had no idea of the future to come when they loaded up a tiny 4 x 8 wooden platform, an eight-foot curtain, and a few props into the back of a pickup truck, drove over to Livingston, set up shop in a park, and performed their scenes for a few scattered audience members in the summer of ’73. 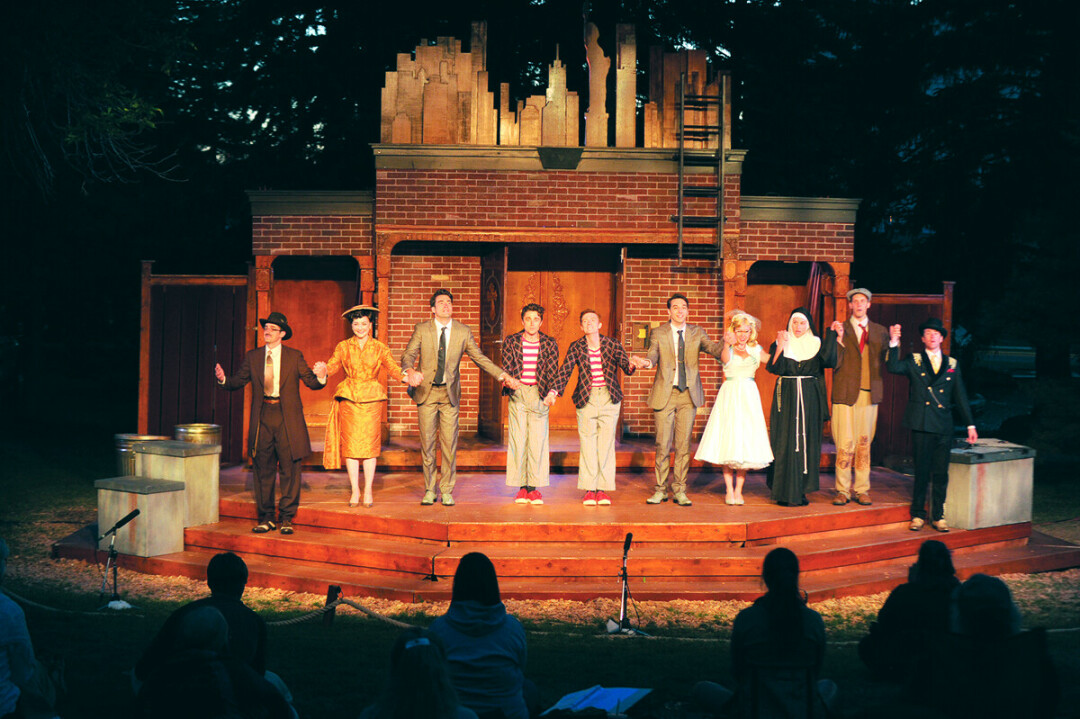 It all began when MSU drama professor Bruce Jacobsen wanted to find more opportunities for his students to perform Shakespeare. Jacobsen’s vision included bringing Shakespeare to the people regardless of economic status or location, as he noted that Shakespeare himself wrote plays for a complete cross-section of society, from rich to poor, from titled nobility to landless peasants. In 1977, as the company went into its fourth year, Jacobsen recruited Joel Jahnke to serve as Scenic Designer for MSIP. In 1980, Jacobsen decided to move from Bozeman to take a job at another university, and Joel Jahnke became the Artistic Director. Jahnke grew the program beyond southwestern Montana into neighboring states, bringing in guest directors. Bill Brown, who toured with MSIP in one of its earlier years, went on to become a very popular director in Chicago. During Jahnke’s long tenure, he expanded auditions, bringing in actors from Seattle, Minneapolis, Chicago, and New York. Jahnke retired after 35 years, and in 2014 Kevin Asselin, who had previously served two summer tours with MSIP in the early 2000s, was hired as the new Artistic Director, a position he holds today.

This year marks the 50th anniversary of the founding of Shakespeare in the Parks. To celebrate this momentous time, Montana Shakespeare in the Parks is rolling out new events and enhancing existing programs that will bring together MSIP alumni, new actors, and new audiences. Launching the celebration is the new Winter Tour, bringing “The Complete Works of Shakespeare (Abridged),” written by Adam Long, Daniel Singer, and Jess Winfield in 1989, to audiences across Montana, Wyoming, and Idaho on a tour that echoes the longstanding traditions of the summer performances. “Complete Works” is a comedy in which something from each of Shakespeare’s plays is presented in a madcap 90-minute performance. This production opens in MSU’s Black Box Theatre on January 20th and runs Thursday - Sunday through January 30th. The show hits the road on February 1st and will present performances across three states.

Asselin brings back recent MSIP alums Riley O’Toole, Calvin Adams, and Charlotte Ellison to fill the roles in “Complete Works,” along with Mikey Gray from last summer’s tour, who will serve as understudy and Outreach Coordinator.

“Complete Works” is a smart choice for a kickoff tour for MSIP’s big year. The concept is that three actors decide to do all of Shakespeare’s plays in 90 minutes, and can do it ad-hoc, improvising on the go. It leads to hilarious moments, as one can imagine when the actors attempt to do “Romeo and Juliet” in eight minutes, and when they set “Titus Andronicus” as a cooking show. The show’s writers encourage theater companies to “make it their own,” giving them wide latitude in artistic choices. The show is meant to play to each audience spontaneously, and the actors occasionally play off the audience; hence, each performance will be a bit different from any other, even from town to town. 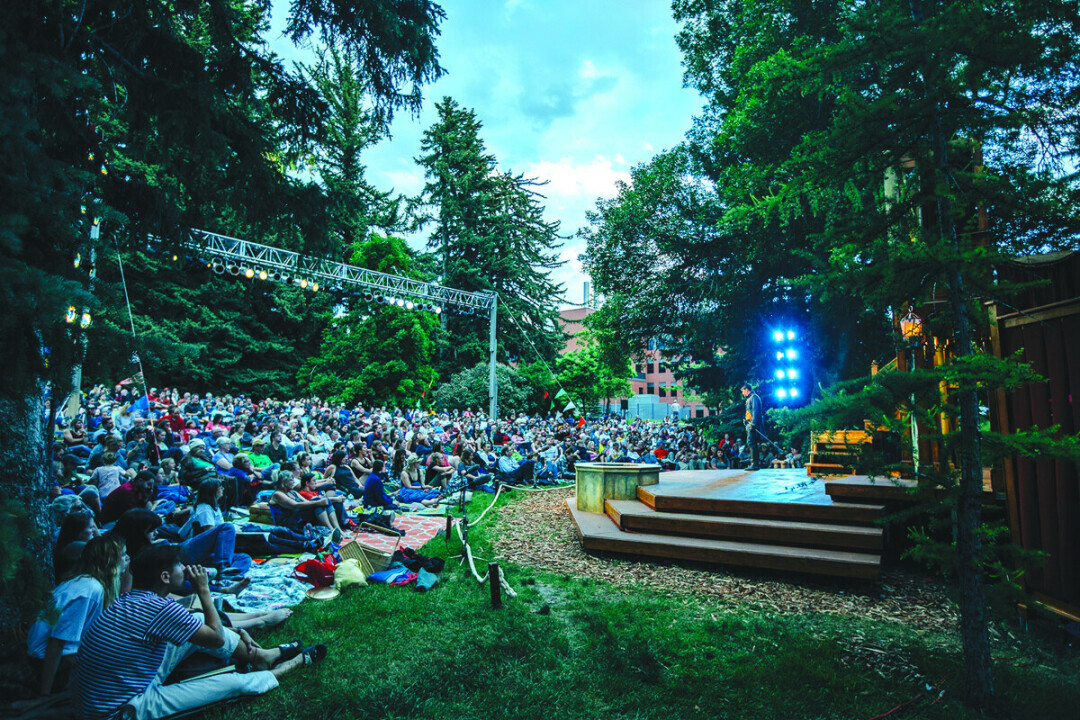 To foster this concept, MSIP set designer Tom Watson is building a set that can be configured in several ways, each reflective of the four stages that have been used throughout MSIP’s 50-year history: a simple 4 x 8 wooden stage about one foot high; a stage that included a higher rise and more intricate and ornate background walls; a stage that had a stairway built onto one side, leading to an upper story and, by 2019, a stage with a second side stairway, creating the basic model we see today. Speakers and microphones were added to performances around 2008.

Montana Shakes!, an outreach to elementary schools founded in 2008, tours with a brand-new show in 2022: “Bottom’s Dream.” This 30-minute show was written by MSIP alum Matt Foss, and is specially designed for elementary students. “Bottom’s Dream” is an adaptation of Shakespeare’s “Midsummer Night’s Dream.” Montana Shakes! performs this adaptation for about 35 elementary schools, offering associated workshops that include language skills, physical activities, and craft-making.

MSIP’s 2022 summer tour begins with performances at MSU’s Duck Pond of “King Lear” on June 15-18, and “Twelfth Night” on June 22-25. They take these two shows on the road for the summer tour on June 26, performing in approximately 56 communities in less than three months, closing in early September. Many people consider Shakespeare’s “King Lear” to be one of the best plays ever written. This summer’s tour marks the first time MSIP has ever performed the tragedy.

The Sweet Pea Festival will again feature both productions, giving Bozeman audiences one more time to see these performances locally. Corresponding with this return to Bozeman will be a 50th anniversary party, scheduled for August 6th. Details about this special party will be forthcoming as the event draws nearer. 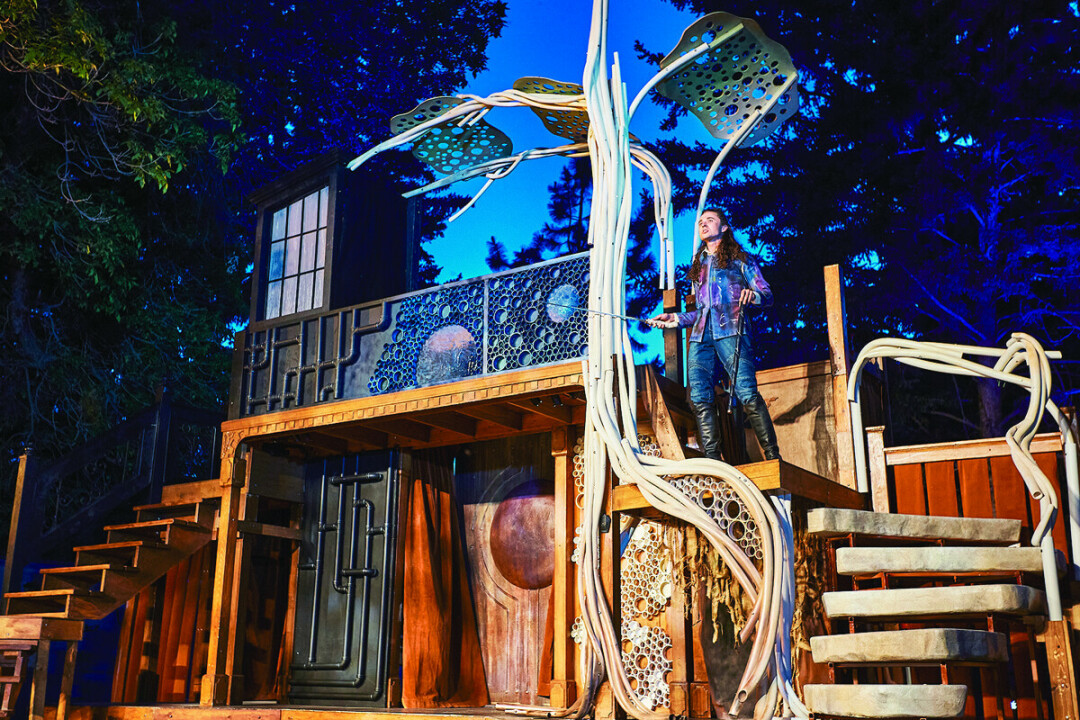 As audience members slowly trickled out of the park after the “Cymbeline” performance in Fishtail last summer, it became clear that Jacobsen’s vision for MSIP has not only been realized, but has expanded beyond anyone’s expectations. Joel Jahnke’s determination never to lose sight of the wonder of bringing Shakespeare to the people built on that vision, and Kevin Asselin continues to enhance what his predecessors have achieved. The people walking out of the park that night were moved, inspired, thoughtful, and exuberant by what 50 years of their leadership has brought, and continues to bring, to the people of rural Montana. But in the end, it’s the people who flock to the parks and the schools and the community centers, enduring the heat and the rain and the snow and the wind, and keep coming back, hungry for more, that form the rest of the cast of any MSIP production.

Remember the popular saying around these parts: “Shakespeare in the Parks: Free. Every summer.”

For more information about Montana Shakespeare in the Parks, including tour dates, performance locations, special events, and other interests, please visit www.shakespeareintheparks.org, or call 406.994.3944.

The Complete Works of William Shakespeare