Is It Safe To Bike In Bozeman?

Recently, there have been two people killed while riding bicycles in Bozeman, both struck by motor vehicles. As our hearts ache for the families and friends of these two men, we are left to ask ourselves how, and why?

I have been riding bicycles in and around Bozeman for forty years. In that time, much has changed. Where and when I ride has changed also. Decades ago, there were few trails and bike lanes, and less motor vehicle traffic. I can remember riding on Main Street, something I would never do now. I try to stick to the extensive network of lanes and trails that have been constructed, but getting to them from home is sometimes a challenge. Since I am retired, I do not commute, and can avoid certain busy traffic times. Yet, I do run errands on my bike, and this puts me on crowded streets.

My perception of the change in vehicle traffic over the years is simple. People drive faster and pay less attention. Modern motor vehicles have many options that pull a driver’s attention inside the car or truck rather than outside, where it belongs. Drink holders, motorized seats and mirrors, satellite radio touch screens, etc., can all become distractions. In addition, our lives have sped up; everything we do seems to be timed. Walking faster or running is hard, but pushing an accelerator is very easy. Then there are cell phones—absolutely the biggest traffic problem, both for cyclists and other drivers. Not going to go into this much, except to say, ‘Put the damn thing in your pocket and leave it there until your drive is completed.’ If you cannot resist, shut it off.

Since these two tragedies, concerned citizens have monitored intersections and counted how many motorists have run red lights (at least one of the deaths was caused by a vehicle running a red light). The numbers that have been counted are huge. This would seem to be an easy fix. Since there are not enough police to observe and ticket offenders, cameras could do the job. However, there is a state law banning this technology. Why? This is absurd. The legislature that passed this law evidently did not read Article 2, Section 1 of the State Constitution, which says; “All government of right originates with the people, is founded upon their will only, and is instituted solely for the good of the whole.” Running a red light is against the law, and this should be enforced. We have a right to expect this. I believe that this law is unconstitutional. 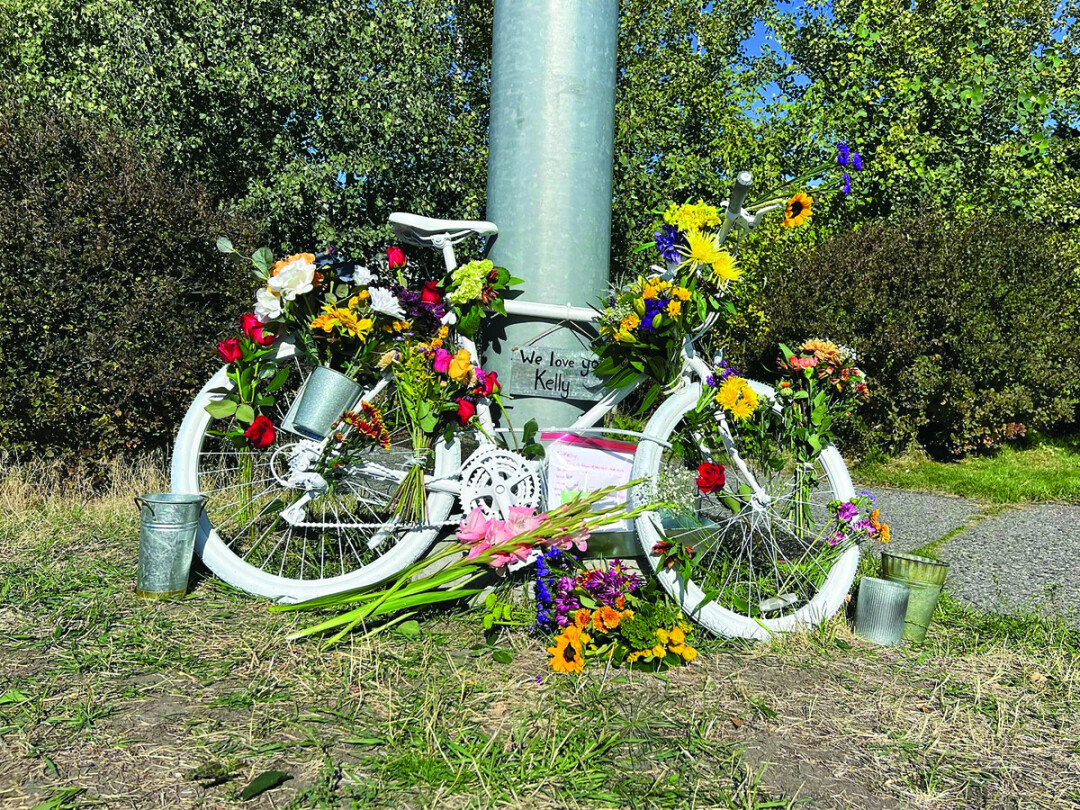 For bicyclists, motorists are not the enemy, but they are a hazard. As cyclists, we have our own responsibilities. Whenever possible, ride on streets with bike lanes. Ride recreationally on our large network of trails. Do not ride on a street or highway when a trail is available right next to you. Be consistent—you are a vehicle, not a pedestrian. If you feel the need to use the pedestrian lanes, walk your bike. Stop at all lights and signs. That means foot on the ground stops. Do not make sudden bursts to make a light or avoid some hazard. Wait. Consider when to ride: early morning or dusk make for limited sight lines in the sun. Wear those bright lime green shirts. Install blinking lights on your bike. When on trails, you become the dominant vehicle. Show respect for walkers, joggers, dogs, and for families with little ones just learning to bike.

The city has committed to making changes. This is good, but not enough. Every one of us needs to change. There are many more of us using the streets. Pedal bikes could soon be in the minority. Scooters, E-bikes of many types, and motorized skateboards are multiplying. The city can regulate, but all of us need to operate with safety and awareness.

Winter is not the prime biking season, yet some people commute on their bikes year-round, and fat bikes that operate on snow, both pedal and electric, are out there more than ever. Driver safety is even more important on snow and ice; winter bikes make this imperative.

Personally, as a motorist or a cyclist, I have at times over the years violated all of these recommendations, but not lately. Lately, while still riding, I have been thinking about tragedy that cannot be changed, but can inspire changes in our behavior.

A Junior at Gallatin High School, Mars Fagin enjoys writing in his free time. He is a member of the cheer squad, and dedicates the majority of his time to bettering himself in these two areas.

Did You Move Here To Be In A Hurry?