Did You Move Here To Be In A Hurry?

I recently met a woman, new to Bozeman, who explicitly told me that her family had moved here to escape the rat race of the East Coast city they moved from. Excellent. I assume many a transplant has done the same. The thing is, we don’t do the rat race here, and we don’t want to. Things are slower in Montana, too slow for some, not slow enough for others. It may take some getting used to, but you’d better get used to it.

Last month a dearly beloved teacher, father, husband, and community member was tragically killed while riding his bike on North 15th Ave. Within a week of his death, I witnessed a full-size truck, pulling a trailer of what looked like heavy construction equipment, blow a red light at 15th and Durston, the next major intersection from the fatal crash. Fortunately, no one was crossing the street during this incident, but I was stunned, and immediately saddened. It’s not like it’s the first red light I’ve ever seen run—it was more the velocity of the barreling vehicle, and the proximity to the crash site a few football fields away.

A few weeks before this, I was within an hour of witnessing the 75 year-old man who was hit on his bike on Huffine Lane early in the morning. I came upon seemingly endless police lights, a fire truck, an ambulance, and coroner. My heart hurt for the bicyclist and his family, and I also felt sadness and empathy for the driver of the car on the side of the road. One morning they can never have back, one wrong move, and everything is different—the life they knew Is over, too.

This week, while driving North on 11th Avenue near the MSU Duck Pond, I witnessed a car come within inches of hitting a student crossing the street at one of the many crosswalks.

As a whole, we are distracted drivers beyond imagination. The possibility that you could hold a phone and operate it while keeping your eyes on the road and your surroundings is laughable, yet I see it daily. It only takes a single second to change the rest of your life. 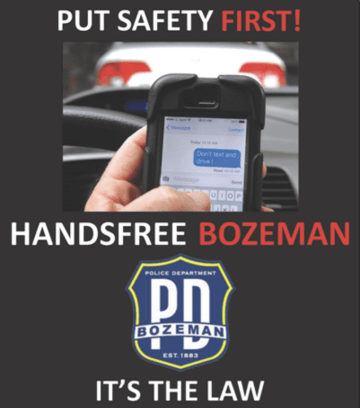 It seems we are in need of a reality check. This is Bozeman, Montana. Not Austin, or New York, not anywhere or anything like anywhere else on the planet. It’s Montana. We are laid back. We take care of each other. We look out for each other. We don’t do the rat race. I really don’t think anyone moved here to be in a hurry, but check yourself.

Is It Safe To Bike In Bozeman?

Why Are Intersections So Dangerous?