The million dollar mark was once a milestone that was rarely crossed for residential real estate sales in and around Bozeman. Looking back at some of the previous peak years, in the entire year of 2007, only 24 homes sold for seven figures or more. In all of 2008, that number was only 22 homes. Now, 14 years later, there have been more than 10 times that, with 259 homes sold above the million dollar mark during just the first 10 months of this year, and another 46 home sales currently pending. These numbers include sales both inside and outside city limits, and all residential property types including condos, single-family homes, and townhouses.

As our area attracted more out-of-state buyers in 2020, the higher-end market showed a big increase. One hundred eleven (111) homes sold for more than $1 million between the first of the year and the first of November in 2020, a more than 50% increase in sales activity. Then, sales more than doubled from 2020 to last year, with 243 homes selling during the first 10 months of last year for more than $1 million. Even though overall sales numbers have slowed, home sales north of $ 1 million have continued to climb, with 259 homes sold to date for more than that amount.

The market north of $2 million saw similar increases, rising from nine sales during the first 10 months of 2019 to 26 sales in the first 10 months of 2020, then nearly doubling again to 50 sales in 2021. This year has held steady, with 49 sales closing north of $2 million. Interestingly, or perhaps predictably, of those 49 sales, only five were homes inside city limits, while the remaining 44 were outside city limits.

Some interesting notes on high-end sales in Big Sky: Through all of last year, over 39 homes sold for more than $4 million, with the average price per square foot pushing well above $1000/sf. This year is holding steady, with 31 homes sold north of the $4 million mark to date, and another 76 similar sales pending. The average price per square foot for these high-end sales is now pushing $1500/sf. These numbers do not include Yellowstone Club sales or custom residences built directly for buyers.

As usual, I have included the latest Real Estate statistics. In addition to the 610 homes sold in the first 10 months of 2022, another 82 single-family home sales are currently pending or are under contract as of the date of writing.

The included data reflects sales of homes in the greater Bozeman area, including Four Corners, Gallatin Gateway, Bridger Canyon, and Bozeman city limits. The data includes home sales reported through the local Big Sky Country MLS, and does not include private party sales, condominiums, or townhouses. 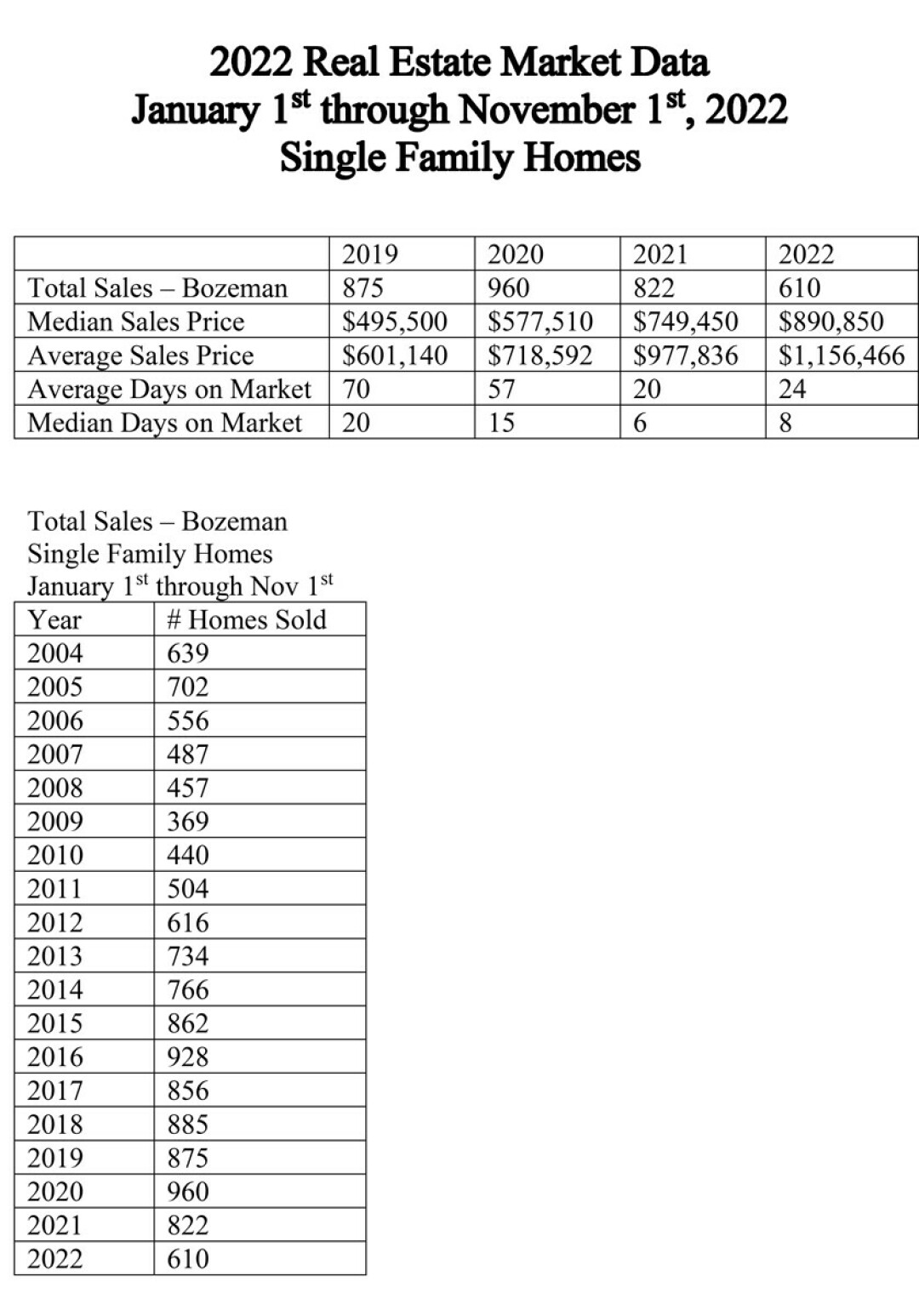 What is the Best Month of the Year to List or Buy a Home?