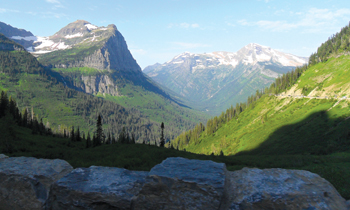 Recently, I took a trip up to Glacier National Park with one of my best friends. She arrived at my apartment the evening before we departed, and I was determined to host a barbeque that night, despite wailing winds and looming thunderclouds. It was very fun, if a bit rushed and blustery.

The next morning we awoke bright and early, and while I frantically finished packing, my friend waited.   Finally ready, I shoved some waffles in my face and ran down the stairs into her running car. The drive to the park was relatively uneventful, aside from my friend’s car going basically airborne into an incredibly poorly marked construction zone.

When we arrived at the dramatically mountainous lake-filled park, we could not find parking at the visitor center. Undeterred, we stopped by the Lake McDonald Lodge to check on boat tour times, and headed for a trail that had been recommended by the mutual friend with whom we would be staying for the duration of our visit. Unable to find parking at the trailhead, and now too late to catch the afternoon boat, I studied the map for a solution. Instead, I made an uniformed miscalculation.

I found a road that appeared to dead end at a trailhead which follows the side of Lake McDonald opposite the lodge. What the map did not indicate is that the road quickly becomes an incredibly narrow dirt road into what appeared to be some of the most fantastic bear habitat that I have ever seen. I spent entire summers in Yellowstone and the Tetons, enjoying a healthy respect for these animals, bear spray attached to my backpack strap. When we reached this particular trail, and unloaded the car, I immediately had my bear spray in hand. I have never felt the need to carry my spray in hand, but this berry-laden bramble-enclosed trail gave me pause. We started down what I believe must be one of the least attractive trails in the park, and decided to turn around about fifteen minutes in, after we realized we were making rookie mistakes. We didn’t have nearly enough knowledge of the trail, and hadn’t told anyone where we were going. As I turned around to take a parting photo of the remarkably unappealing trail, my friend spotted a bear. At least she was pretty sure she saw a bear, not too far down the trail. Either it moved away before I saw it, or it was a bear created in her imagination by the sheer force of her fear. In any event, the hike back to the car was a bit unnerving.

Foiled by poor planning, and a possible fear bear, we drove to the lodge to calm our nerves with some dinner and an early evening boat ride. 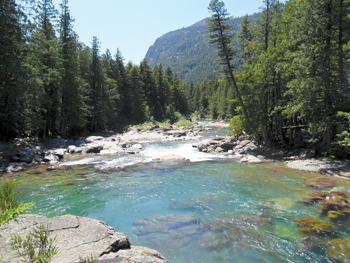 Both were very nice, and thusly comforted, we headed in the direction of our friend’s house. She lives in the park, and we were at her place less than an hour before I looked out the window and shouted a profanity-ridden version of, Look, a bear! In a very up close and personal expression of raw beauty and power, a large black bear sauntered through her back yard.

The next morning, we drove over the Going to the Sun Road on our way into the Canadian side of this International Peace Park. We were determined to have an exotic foreign adventure, you see. The drive was duly spectacular and involved a goat sighting. Being an inattentive navigator, I inadvertently took us the long way to Waterton Lakes National Park. Being a major Francophile, I got very excited upon seeing signs featuring both French and English.

After a brief stop at the visitor center and some instructions from an incredibly helpful employee in tragic short pants, we drove into the town of Waterton. Acting like proper tourists on an incredibly tight schedule we purchased some souvenirs, dipped our feet in the lake, and took a bunch of pictures. As we made plans to come back in the future and allow far more time to explore, we walked past the heritage center, the front of which was decorated with beautiful flowers growing in raised beds and covered in cages. I could only conclude that either the local deer, or flowers are very aggressive. After a lunch stop at the dramatic Prince of Whales Hotel, where some of the employees wear kilts, we had to begin our drive back to Glacier.

Before we left the following morning, we finally found parking at the Trail of the Cedars. It was worth the wait, and just what we needed before beginning our trip back to Bozeman. On the way, we made sure to drive along the east side of the beautiful Flathead Lake, and ate approximately our respective body weights in cherries.

My only regret is that we didn’t have more time.

After visiting the west at the age of fourteen, Jamie Balke has been coming up with progressively more elaborate schemes to never leave.